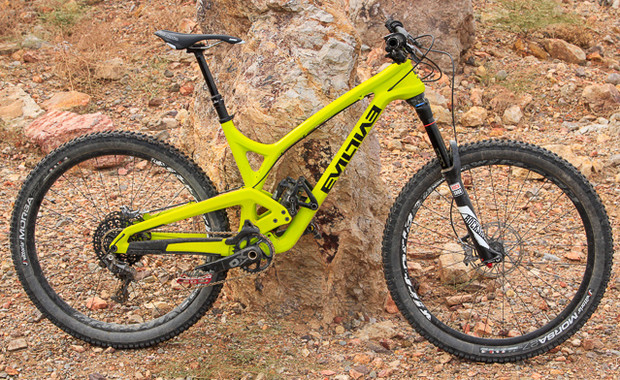 Evil's new Insurgent–a 27.5" wheeled all mountain bike with a 150 mm of rear suspension, 160 mm up front, and the same wild-looking single pivot that made their 29" Following bike such a dark horse sensation–was in high demand at the Outdoor Demo this week. Dropping their single pivot design into a package that put it up against the madly popular enduro/all-mountain bikes of the current day, everyone was wanting to get their sweaty palms on one.

Unfortunately, there actually was only one to be had–the geniuses at Vittoria had slapped their wheelset on one, and immediately had people waiting with baited breath until the bright yellow bike appeared within view again. Every time it rode by in the parking lot or test tracks, heads were turning and Napolean Dynamite-style "Lucky!!" phrases were heard as the rider whizzed by, oblivious to anything other than how much fun they appeared to be having. Almost completely by accident, I was able to time a conversation with the Vittoria rep right when the last guy returned the bike, and was able to take the Insurgent out for the last hour of the Outoor Demo to see what all the hype was about.

Right off the bat, the Insurgent made itself known that it would be the fastest bike I would ride all day. Despite starting out on a loop of rolling cross-country trails, the Insurgent was immediately hounding the trail for speed, pushing out of any corner that would support it, and spinning up with a snap to speed on any incline where gravity could assist. That Evil’s linkage design put the weight of the suspension almost all the way down with the cranks was obvious, as the bike had a quietly planted feel, and when you hammered through a rock garden, it felt like the weight of the bike was sitting right around your feet.

While climbing the Insurgent was nothing remarkable, even mellow XC trails were fun, and despite being totally exhausted at the end of the day, I found myself standing on the pedals for almost the entire ride, being constantly egged on to go faster and find more speed. Instead of just slowing to an uneventful crawl at the top of short punchy climbs–because I suck at climbing, as I was constantly reminded by the XC nerds here passing me every time the trail went up–I found myself manualing over the top of the them instead.

RELATED: Check out all of TGR's coverage from Interbike 2015

Even on flat, awkward tech sections, I was looking for the most unsuccessful-looking line every time, trying to find the limit of the bike’s ability to smoothly carry itself to the other side, and didn’t find it. With a nice combination of the wirey, responsive, pump-the-land feeling of Santa Cruz’s new 5010 and the stability and straight-line confidence of any of the burly enduro bikes I tried, the Insurgent had a awesome feeling of giving you a smooth rear end that never was about to buck you off the pedals, but one that didn’t completely mute the trail either, giving you a more sensory experience of knowing what was going on underneath you without ever having to be afraid that you were out of your depths.

The bike lofts itself in the air naturally, and, at the end of maybe an hour of riding cross-country and a shuttle lap off the top of Bootleg Canyon, I found myself riding everything but the long climbs faster than I had on any other bike. Everywhere I rode, people were calling out lines like “Best bike ever, huh?!?” but I was too busy hammering the pedals to respond, relishing in how much this Evil is eager for speed and continues to push you, without almost any break-in period, to go as fast as humanly possible for the sake of overdosing on endorphins and adrenaline. The hype is real, my friends.