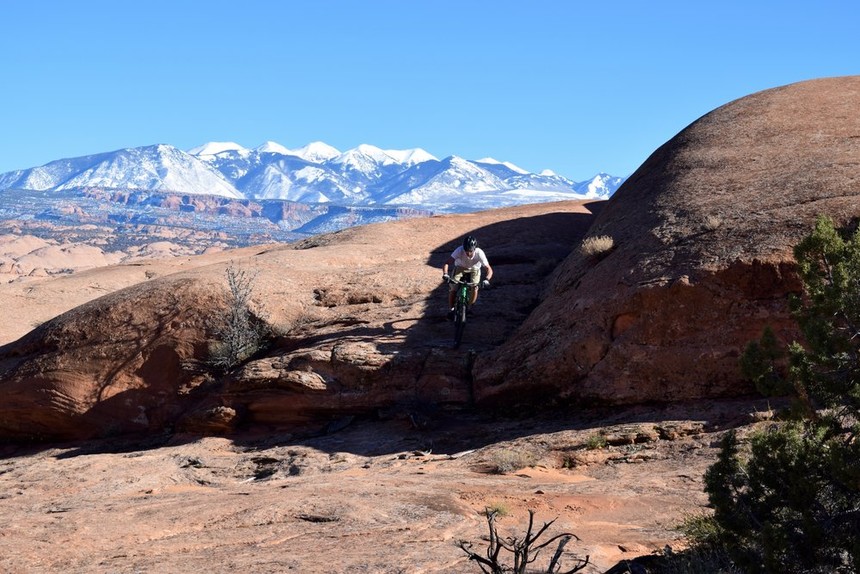 Moab's unique Slickrock trail is one of the main recreation attractions in the area. Max Ritter photo.

Earlier this year, the Bureau of Land Management announced it was planning to open several parcels of land around Moab, Utah to commercial resource extraction. Two of these parcels were in the Sand Flats area, home to the famous Slickrock Bike Trail. One of the parcels in question covered nearly two-thirds of the entire trail. Naturally, this raised protest among local elected officials, mountain bikers and other users of public land, who were worried about losing access to their favorite playgrounds. This weekend, BLM announced that it has canceled the sale of these two parcels following pressure from these local groups.

By law, BLM is required to conduct quarterly competitive lease sales to offer available oil and gas lease parcels to the public. Outside entities are allowed to nominate parcels of land for lease, and the Slickrock parcels were nominated anonymously. BLM then determines the feasibility of these leases, conducts an environmental assessment, and holds an open public comment period, before making a final decision on sale.

The criticism against the BLM proposal stemmed from worries that the highly lucrative local recreation economy would be harmed in the name of extraction with low potential. According to the Salt Lake Tribune, Grand County officials unanimously opposed the BLM lease, and asked Utah Governor Gary Herbert to defer the proposal. The remaining land parcels are currently undergoing environmental assessment, which will open for public comment and review this week.

Don’t drill here! This is where I ride my bicycle! Waaaaa!

The formation team celebrate after an incredible week of learning and riding in the desert. Katie Lozancich Photo. There have been numerous calls for a women’s Rampage, but to progress women’s freeride the industry needs to think beyond just a singular event. They need to build a community. So following the 2018 Red Rampage event, a group gathered to discuss the future of women’s freeriding. It was clear that lone wolves like Casey Brown existed and were fighting hard for their seat at

It’s been a ground-breaking year for Hannah Bergemann. After an incredible performance at Red Bull’s Formation last fall, things simply snowballed for Hannah B. She became a full-time media athlete and racer for Transition bikes and even traveled all the way to India with a TGR production crew to film a segment for . Bergemann recently sat down with the Hangtime Podcast—a new podcast highlighting rad people on bikes—to shed light on her many season highlights. The episode covers