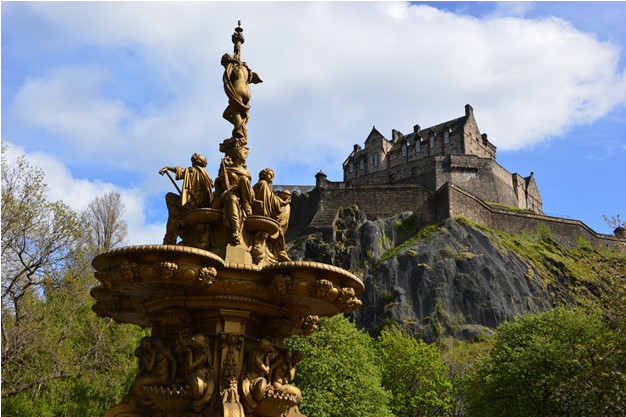 If Scotland isn't on your international travel bucket list, it should be! From visiting fairy pools to majestic castles and beautiful national parks. An aura of magic and folklore surrounds Scotland for good reason. Where else in the world can you explore vast open fields, look for the loch ness monster, or encounter ghosts in haunted halls of historic monuments?

Experience the finest adventures that the country has to offer with these 10 best things to do in Scotland.

This historic site is the most visited national monument in Scotland for a reason. A huge, movie-worthy castle perched upon the plug of an extinct volcano, overlooks the countryside.

The Edinburgh Castle has been a focal point of Edinburgh's skyline since the 12th century. Tour the castle, and other historic sites like the royal mile to experience the countries history firsthand.

This magical location is home to a ton of Earth's beautiful wonders, from the warm-colored rocks jutting against the deep blue of the sea to magical fairy pools so ethereal they've been an inspiration of folklore for centuries- The Isle of Skye is easily one of the best things to do in Scotland.

You can easily spend days on end here, exploring what magic the island holds. It's hard to take it all in at once so make sure you plan to spend some quality time here if you really want to experience all The Isle has to hold.

Scotland is home to, arguably, one of the cutest animals in the world... Puffins! Head over to a tiny island off Scotlands coast called Lunga, here over 4,000 Puffins conjugate, so it's the best place to view them in all their glory. You can spot these curious little creatures hopping all over Scotlands beaches but to experience them in such large capacity is really astounding!

4. Gateway to The Highlands

Heading up North from Glasgow through The Highlands is one of the most popular scenic routes in the world! If you drive far enough north you'll run into Inverness, the farthest north city in Scotland. This idyllic city is home to one of Scotlands biggest tourist attractions, North Coast 500.

North Coast 500 is 516 miles of beautiful Scottish landscapes, with many tiny villages and historic stops along the way. Scotland also allows wild camping on space that is typically known as Enclosed land. This makes North Coast 500 popular amongst campers, and nature-lovers alike.

If you're interested in pitching a tent just make sure you leave no trace and adhere to the wild camping laws of the land.

The Outer Hebrides is another example of Scotland's jaw-dropping landscape. Take either a short cruise or flight to reach the island of the coast, you'll be greeted by golden sands, sapphire blue water, and picturesque mountains off the coast. Wild horses can also be spotted roaming the beach adding an extra layer of mystic beauty to the scenery.

In the summer, the beach will be littered with couples and families picnicking, playing, and swimming on the warm sands.

Scotland is the birthplace of many incredible, useful inventions but one of their most famous is the game of Golf! The Royal and Ancient Golf Course of St. Andrews has been recognized as golf's ruling body in 1750 and has been one of Scotland's greatest tourism attractions since.

Here you can tour the British Golf Museum and learn golf's history through the medieval ages until now.

This famous Viaduct may be specifically familiar to Harry Potter fans, as it's featured in many of the movies! Only a short drive away from Fort Williams this beautiful structure contrast with the vast, rolling hills making it a spectacular sight. Check the train schedule to perfectly time your visit with ones passing to really complete the visit.

This picturesque island off the coast of Oban is a hidden gem. The emerald green rolling hills meet the ocean creating a quaint scene like no other. Explore the Gylen castle ruins, which overlook the Fifth of Lorne. The castle has seen better days but the location of the ruins combined with the jet black, crumbling structure really makes you feel like you're in fantasy land.

Some of the castles focal features still stand within the ruins, make sure the scope out the stone Gargoyles rumored to come alive at night!

Just a short drive from Glasgow is Britain's largest lake, Loch Lomond. This beautiful lake is a popular tourist sight for many reasons! The lake is teeming with fish like trout, salmon, and whitefish making it a favorite among fishermen. The ocean-like lake is home to many water sports, you can spot boaters pulling tubes, skis, and boards behind them for miles.

You can also hike along the lakeside to Ben Lomond (3,192 feet) which overlooks the idyllic Trossachs National Park. You can't talk about Loch Lomond without mentioning it's home to the Loch Lomond Sea Life Aquarium! Among its displays of native marine life, you'll find Scotland's largest shark tank.

Glasgow is the largest city in Scotland meaning it has something available for everyone. Whether you're looking to shop, find some live music, or enjoy some signature Scottish cuisine, Glasgow's constantly changing entertainment has your back.

If you're looking for a more creative endeavor check out one of the 22 galleries at the Kelvingrove Museum which is full of enriching and interesting exhibits from all over the world. Head to the main shopping streets of Sauchiehall, and Argyll to experience an array of shopping.

Don't worry if you aren't much of a shopper you can always buy Macallan online! Skip the stores and hunt down historic music venues like The Hydro along the strip.

Finding Things to Do in Scotland

Scotland is a dream for traveling aficionados and it should be for you too. Between unreal landscapes, to historic clubs, Scotland has something to offer for everything you might be interested in. With some diligent planning you'll be on your way to maximizing your trip's experience.

If you've found this information helpful, explore the rest of our site for more traveling advice and insight.