Editor's Note: How much trash do you see on your own outdoor adventures? Less or more than there used to be in your go-to spot? One guy, Steven Reinhold, got bugged by his own mistaken dump of a receipt out the window to try and start a social movement around collecting trash from wild places. Will you join him? 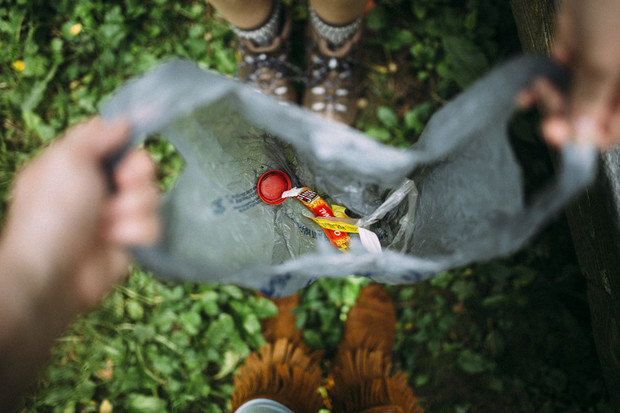 You just topped out on the Grand and you're totally stoked! Then, your buzz and all of your pictures are ruined by a trashy summit. Help us all avoid epic fails like this by joining the #trashtag project and posting pics of your own clean up efforts on instagram. We aim to make a tangible impact on the environment through the galvanizing forces of social media. Include a #trashtag and tag @UCOTRASHTAGPROJECT in the description for the chance to win awesome gear from UCO starting October 7th!

This project was dreamed up on a road trip from California to Jackson Hole, check out the story below...

Our destination was Wild Willy's hot springs–a veritable volcanic oasis–on the outskirts of Mammoth, CA. The night before, we camped under the stars at the base of Mt. Whitney inside the spooky confines of the Alabama Hills. Early the next morning we were cruising northbound on highway 395 when a shearing crosswind rattled our ride and jettisoned a receipt out of the passenger window and into the picturesque Owens Valley. 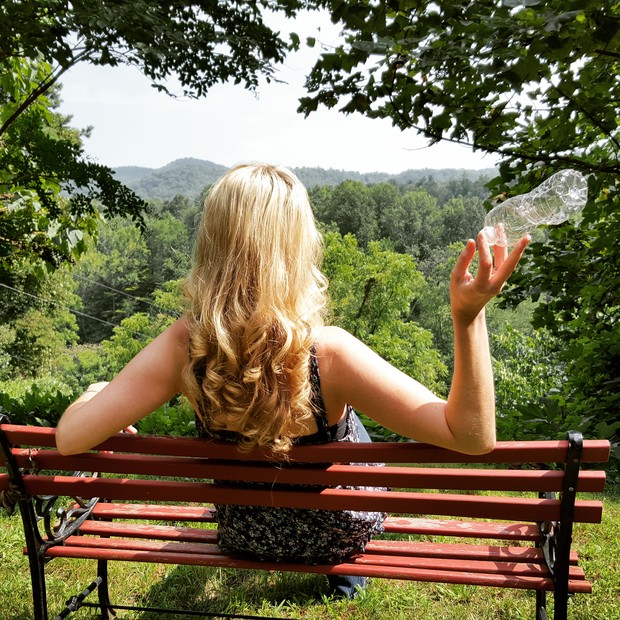 As I steadied our course, my stomach fell to pieces. That receipt was from a frivolous gear binge in Bishop, CA. I should have stopped; I should have ventured out into the dessert and removed that heinous relic of my self-indulgent shopping spree. However, Heyward and I just continued our California cruise, and I sat in silence, inwardly haunted by this inadvertent littering fiasco. My karma account felt indebted to righting the wrong of this unfortunate event. Emphatically, I vowed to gather one hundred pieces of trash during the trip!

Over the next few weeks, I proudly explored our country in eco-warrior mode. Our trip led us through Yosemite Valley, Tuolumne Meadows, The Devil's Postpile, Kings Canyon and Sequoia National Parks. In all of these places I cleansed our foregrounds of that nasty and prolific invasive species known as garbage. Heyward had to return home to normalcy after our tour of the Southern Sierras, but I continued the quest. My adventurous spirit helped me find trash on the 14,000' summit of Mt. Langley, at the base of Mt. Whitney and on the shoulder block of Cathedral Peak. 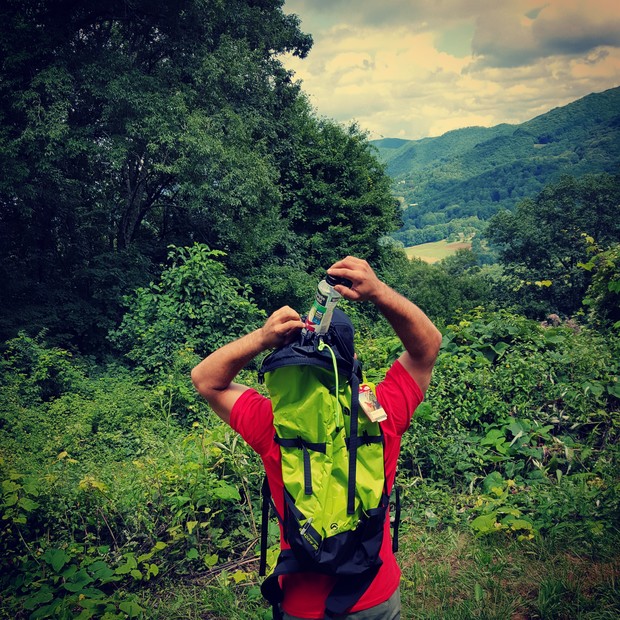 I continued my journey north, all the way to the emerald blanketed slopes of Mt. Shasta where I was able to relieve the lush landscape of  its trashy burden! Jackson Hole, WY was my next destination, and there, at the alter of quite possibly America's greatest cathedral–The Grand Teton–victory was finally found. On the shoreline of Jenny Lake I reached down in one victorious swoop and grabbed a tattered granola wrapper–the one hundredth piece of trash removed from this land I so cherish!

The thrill of victory was fresh! An endorphin cocktail circulated throughout my body and my mind raced with the possibility of furthering this quest. If I could convince 100 people to join in then together we could truly make a tangible difference. If I could convince 100 people then why not 1,000... why couldn't we pick up a million pieces of trash together? Some where in those jumbled ruminations an idea formed and sprung from my mouth as quickly as the receipt from my window... #TRASHTAG!!! Instead of taking self fulfilling summit selfies we should be "#trashtag'n" ourselves in pictures where we are cleaning up our wild places! 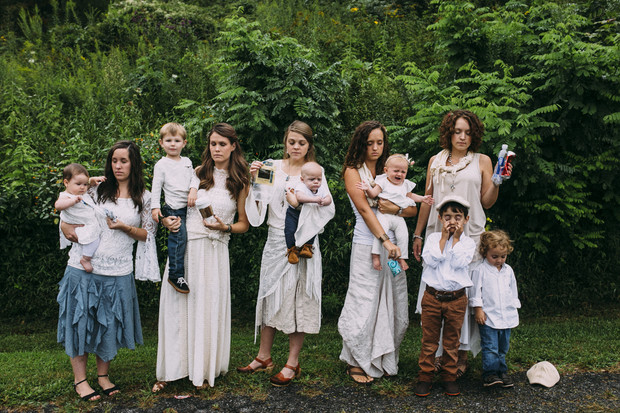 I believed with the galvanizing capabilities of social media the #trashtag campaign could gain enough traction to actually work! A few days later I pitched #trashtag to the progressive minds at UCO. They fell in love with the idea and quickly became the driving force behind the movement! With their backing, #trashtag was officially born and with your support we can officially make a huge impact on this planet we call Earth! Thanks for this, Steve. My outside-time is the counterpoint to my day-job and it always floors me to see litter/trash/garbage where it doesn’t belong; I work at a regional landfill in the Kootenays, Scrooge McDuck my way through the waste-stream almost daily, so seeing illegal dump-sites, etc, makes me snap.
I bet most folks are pretty conscientious when it comes to “pack out what you pack in” thinking, but it’s probably safe to say a lot of us have lost a zip-tie, toque or something without even realizing it- Good to know that others are on the same page when it comes to keeping the trails and such clear Thanks for checking out #trashtag! Speaking of landfills—and you can attest to this—isn’t it crazy how many recyclable items end up in them?

Landfills are a strange animal: Where and how else could you dispose of essentially anonymous materials wrapped up in a black/opaque plastic bag? If someone handed you a package like that and gave you a couple bucks to get rid of it (and you aren’t allowed to look inside) you’d probably be suspicious and rightly so! The things I’ve seen over the last eight years have blown my mind, every time I think I’ve seen it all something new sneaking into the system- Asbestos, Haz Mat, mercury, PCBs, auto-fluff, heavy metals, improperly disposed of sharps, carcasses, etc. Use your imagination, and yeah, it’s as bad as that and worse.
Horror stories aside, the fact is that every bag of garbage is effectively a time-capsule, (compacted or not) and unless we perform the occasional audit the materials they contain are pretty much unknown- Where materials intended for diversion are concerned, you’re absolutely right Steve. Paper, glass, refundable containers, rigid plastics, batteries and the like routinely end up underground; Most folks are convinced they’re leading such harried lives that they couldn’t possibly take the time to do things correctly, while others have ingested a few too many tinfoil hat wearing memes about the failed state that is recycling- I’m routinely lectured by “free man on the land” types that know better than my crew and I, camo-wearing conspiracy nuts that have “seen through the bullshit” and who commit to throwing “their crap in the woods next time.”
I could run off at the mouth/keyboard on this for a while, skewer folks for their willful pignorance or laziness, but the fact of the matter is that the 3 “R’s” are actually a hierarchy- Reduce, Reuse, Recyle, in precisely that order. That is, we need to reduce our consumption, reuse materials when and wherever possible, and recycle or reconstitute those materials if the preceding two aren’t “do-able…”
Outright disposal has to become our last and final resort, but bad habits are hard to break… consider this, though- We are the one and only species on this planet that generates so-called “garbage.” Nature doesn’t really abide by or create waste, while we’ve made it our most sizable creation/contribution to the world thus far. That is, what has outlived its usefulness or been relegated to the junk pile far outweighs what is still of utility and in use.
Just sayin’.

That is an incredibly eloquent trash statement! I would love to see a picture of you saving a few recylable items with a #trashtag from the landfill to put thone words into a picture. Thanks again for your passion!

READ THE STORY
Up Next Ice climb

Here’s a horror story from Colorado: a few days ago ice climber and AMGA Apprentice Guide Leland Nisky was out taking a solo lap on a classic ice climb in the San Juan backcountry called the Ribbon. It’s a steep, walled-in WI4 couloir of ice that has as large bowl positioned above it that will often funnel spindrift and sloughs down the ice. While Nisky was about 400 feet up the route, a massive slough came down and he could do nothing but hang on for dear life. The resulting video is insane,