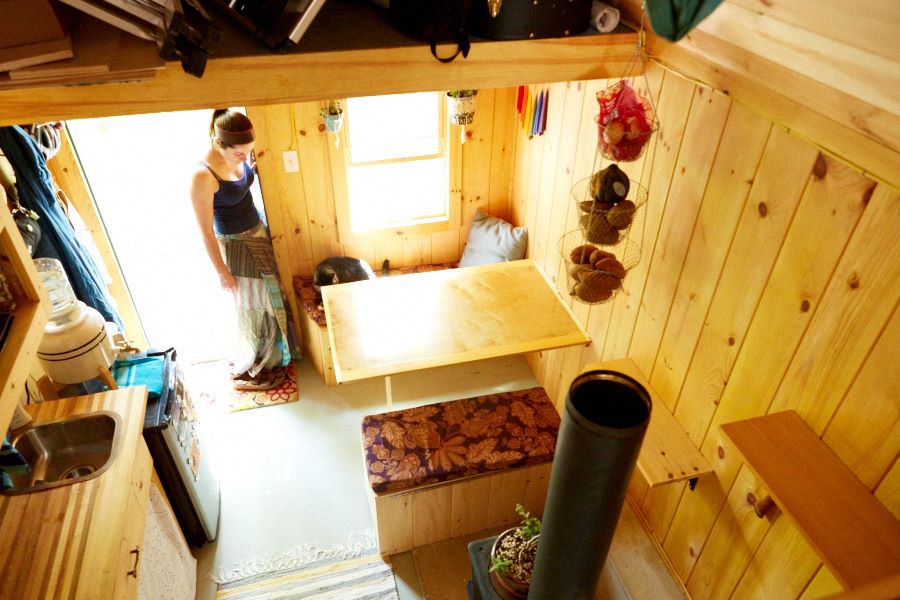 After living in a tent on the Appalachian Trail and an equally tiny apartment in New York City, Kit McCann and her husband Michael Wilson were ready for a place to call their own in Maine. Traditional housing did not appeal to them, and on a whim, they stumbled on the idea of building a tiny house. We caught up with her to tell us how you can live in a tiny house without compromising comfort, the one household item she couldn't live without, and why she can’t tell you exactly where she is.

What inspired you and your husband to live in a tiny house? 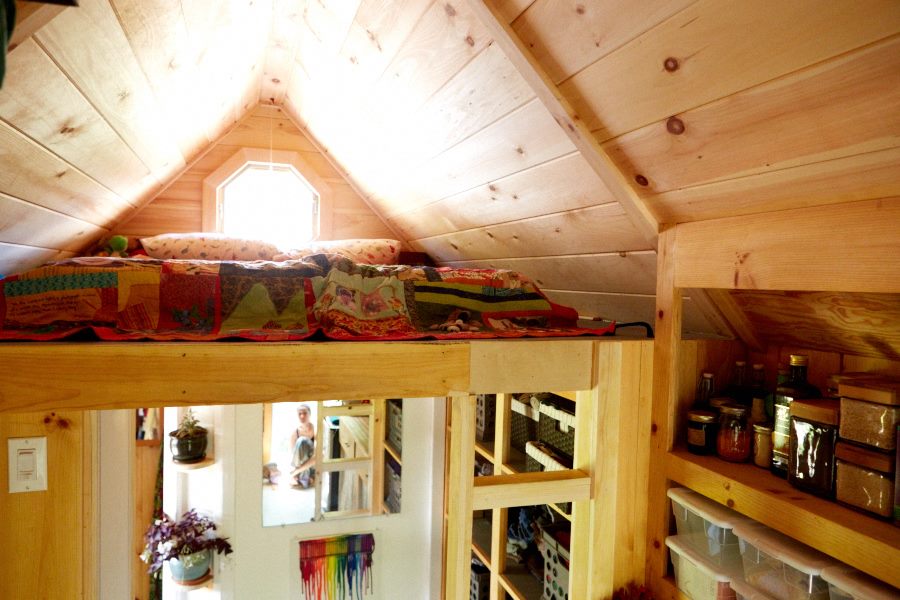 At 18 feet by 8 feet, this house (not to mention the loft) is the definition of cozy.  Kit McCann photo.

I’ve never really been a fan of big houses, I think they’re really beautiful. I totally respect that some folks like big houses, but I grew up in a military family.  I lived in 14 places before I turned 18, so I got a good chance to live in a bunch of different types of homes. I found that living in big homes didn’t really quite feel like my habitat. But to be honest, I hadn’t even heard about tiny houses when my sister told me to check them out. I looked the concept up and I though they were really charming and approachable.  Before I lived in Maine, I was in New York City and lived in tiny apartments. After that we hiked the Appalachian Trail and lived in a tiny tent, so it seemed like the perfect size to me.

What advice would you give to someone considering living in a tiny house?

Some people like having lots of space, possessions, and there is nothing wrong with that.  If somebody hasn’t lived in a small space, the first thing that would be important is to look around at the space they have, and look at each one of those things in turn and think, “How would I feel if I didn’t have this anymore?”  Be honest with yourself about it.  If you really like having a giant shower, that’s OK.  You just need to know what makes you happy.

What surprises people most? 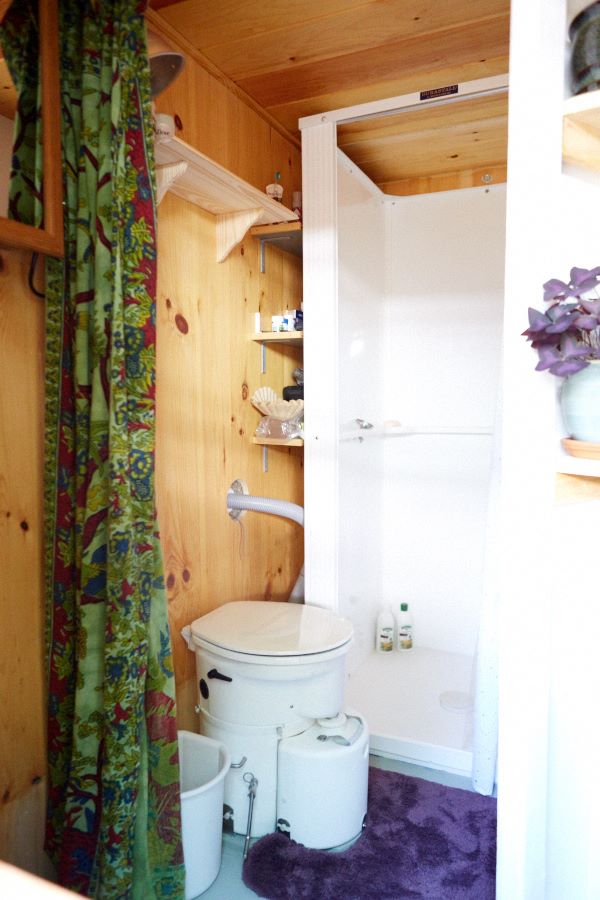 Just your average bathroom ... minus the plumbing.  Kit McCann photo.

Well, the best example is that I have a compostable toilet. That means I have no plumbing! My toilet does not flush, and it’s super cool!  It’s not just a bucket you sit on. It looks like a regular toilet, it’s not stinky or anything … but it was definitely an adjustment!  Not a lot of people, once a month, have to take out their own waste. Don’t worry, we’re very sanitary about it … but by this point, it’s normal!

Related: The Cinder Cone is the Ultimate Treehouse

Oh, another thing.  Our shower is 2 gallons of water.  I have to physically pump it up between each wash.  There are things that, to me, seem perfectly normal because I’m used to them … when I stay at a friend’s house and I use a normal shower, it’s like magic!

If all of this frustrated me, it wouldn’t be any fun.  Some people think that it’s totally weird, and that means it’s just not for them.

Let’s talk logistics. How did you re-do the house from the way you bought it to where you are today?

We bought the house for $15,000.  The refurbishments and changes, all together, cost us around $5,000.  We did a lot of repurposing.  We stripped a wall and turned it into a ladder.  And then we used the extra wood to make benches.  We repurposed everything that was already in the house.  The most expensive thing was our toilet.  I put my foot down.  I’m not going to use a bucket, I don’t care how much it costs!  I want something with zero smell. We got an Airhead composting toilet (which costs $1029.)

What was the most memorable moment along the way? 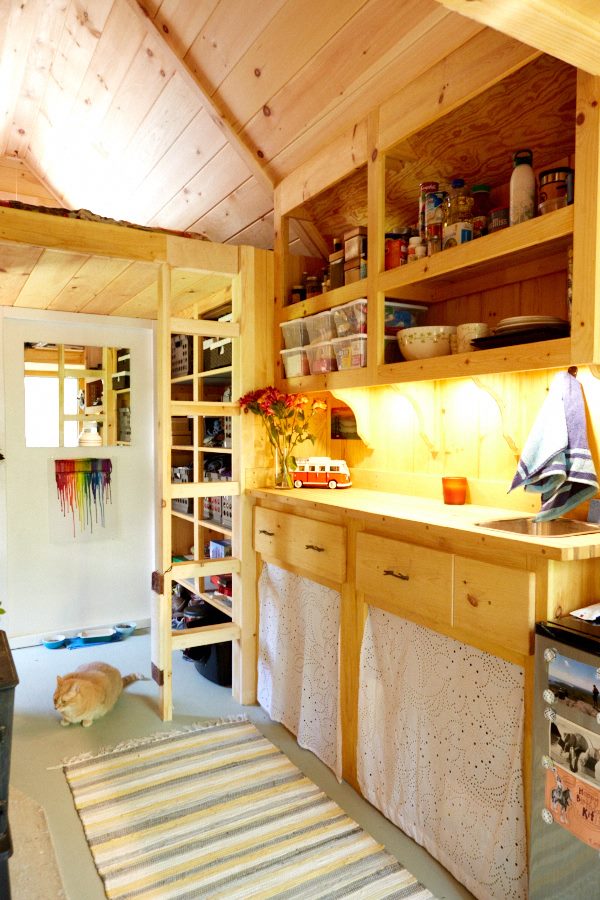 The sink, no longer overflowing, in a kitchen primarily equipped with gear meant for living at sea.  Kit McCann photo.

Strangely, we haven’t had any huge hiccups.  It’s weird, there’s a part of me that’s still waiting … (knocks on wood over interview.)  We have a 3-gallon jug underneath our sink.  The sink drains into there, and then we have to empty it and take it out of the house to empty it.  During the first three weeks in the house, we were still getting used to things.  We had just had dinner and I was in the bathroom when Michael took the bucket outside to empty it.  I didn’t know it.  I washed my hands, started doing dishes, and the water started pouring straight onto the floor.  I didn’t realize it until there was water flooding over my feet!

What do you miss the most?

An oven.  I used to bake more frequently, but it’s probably better in the long run to not be eating pie all the time.  My best friend lives 3 miles away, so if I had a really big urge, I’m covered.

Are you a minimalist? 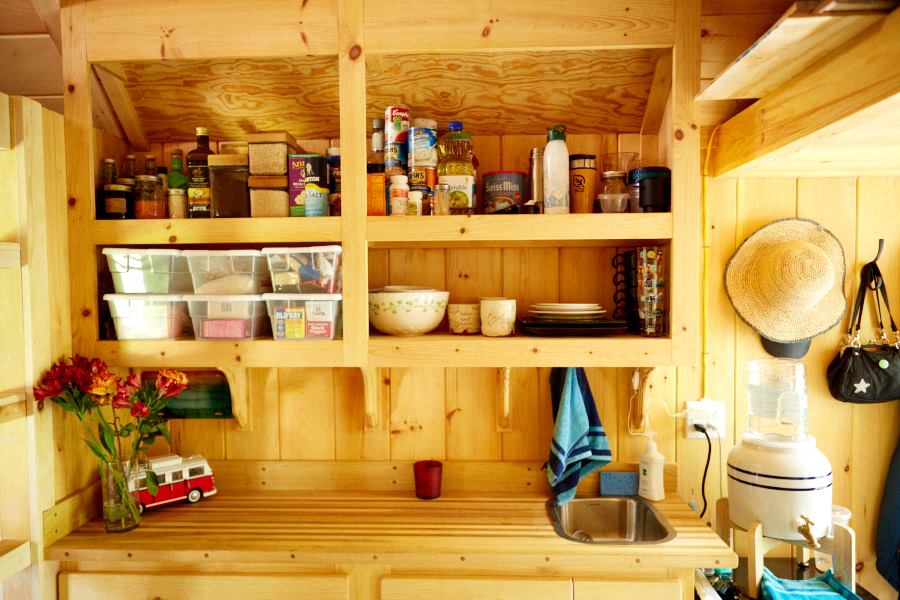 If only all of our kitchens were this organized.  Living in a small space means you have to tidy up fast before things spiral out of control.  Kit McCann photo.

Not at all!  Honestly, I love things. I’m not a minimalist, not even close. Now I just have to think a lot harder and really assess, do I really want this thing and where will I put it before I buy it.  If I get something new, I have to donate that other thing right away.  Literally there isn’t enough space for me to let it pile up.

I’m also not the cleanest person in the world.  I leave my suitcases out for weeks after vacation.  But now, I have to put things away right away. I’m kind of glad that I’m forced to do that, because it’s not in my nature. It’s not in my instinct.  It’s fun to have an organized living space in spite of myself.

Say you want dogs or kids in the future. Would you consider moving back into a traditional home? How would you make that work? 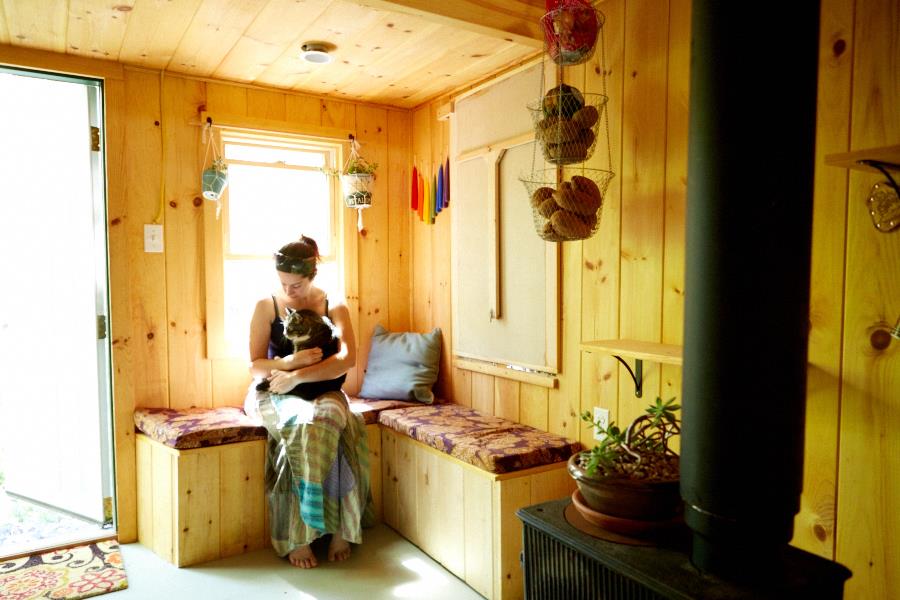 Kit and one of her two cats basking in the afternoon light.  For a tiny house, this place is super airy!  Kit McCann photo.

At some point, we’d like to buy our own land.  I can say with certainty that we wouldn’t move back into a regular home, but we might build another small structure and figure out how to connect our two structures.  We would love to create another tiny house!

Are there any challenges living in a cold environment in a tiny house? 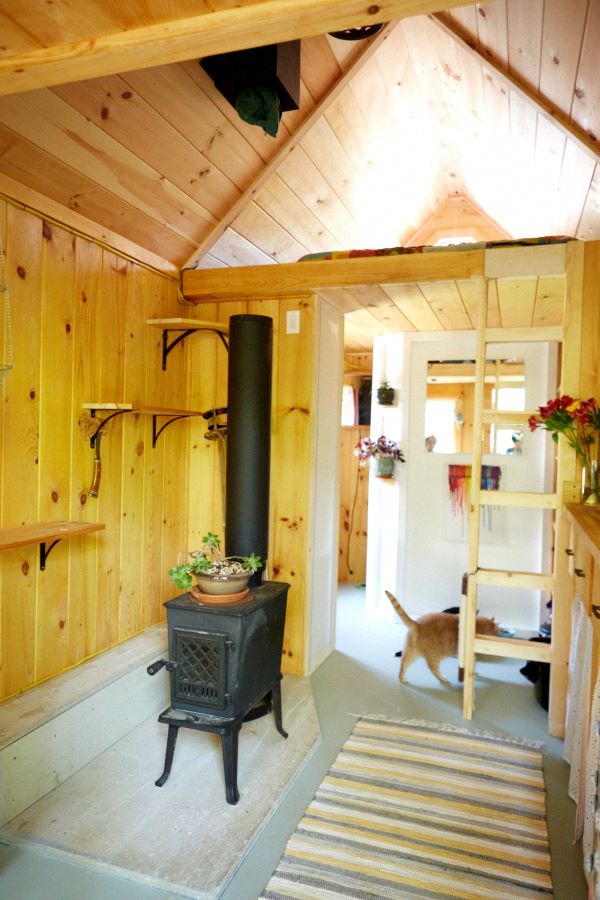 A wood stove keeps things toasty, sometimes too much so, in the winter.  Good thing it isn't cold now: Kit and Michael had to take the top off the chimney to move the house.  Kit McCann photo.

The funniest reaction to me, living in Maine, is people asking, “What are you going to do in the winter?”  We have a tiny house, itty bitty, 18 feet by 8 feet.  It’s SO easy to heat!  It’s the size of one room.  I feel like it would be harder to heat a big house!  It just doesn’t make any sense to me.  It just has to be really well insulated.  You need to insulate the floor.  Our house is ridiculously insulated: each wall is four inches thick with the insulation, as is the floor.  There were times this winter, when we got the wood stove going, it would be -10 outside and probably 90 inside.  I was sweating.  I had to open all the windows!  This past winter, we spent $0 on wood because we had a lot of scrap wood and we also cut down our own wood.  It makes me feel super rugged and cool.

Last question. Where are you right now? 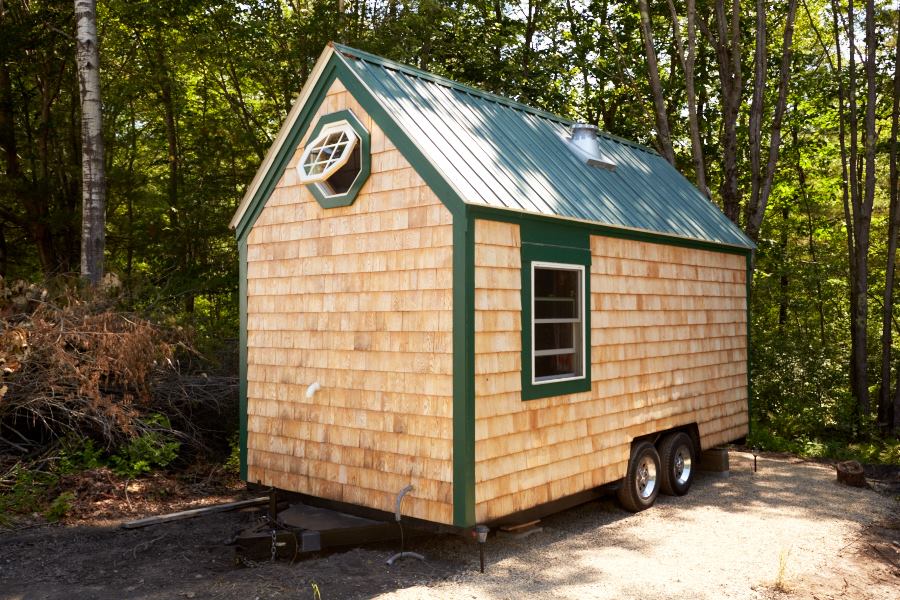 Where in the world is Kit McCann?  Living in a tiny house sometimes necessitates being covert.  Kit McCann photo.

In Maine, there are a lot of laws about living in a mobile dwelling for a certain amount of time. You’re only supposed to be in one for six months.  Understandably, a lot of towns don’t want people living in RVs year round.  But our house doesn’t count as an RV, but because it’s tiny, it doesn’t fit the permanent dwelling requirements either.  We’re in a gray area.

I actually can’t tell you exactly where we are.  The town is being really nice and tolerating us.  I can tell you that we live in Maine, and that’s about all I can say.  Oh, wait.  I can tell you we’re in southern Maine! It’s ridiculously hilarious.  Why do I have to sneak around and feel like I’m breaking the rules when I’m doing something so good for our planet?  In a week, we use about 18 gallons of water for 2 people and 2 cats.

In case you’re wondering, the EPA reports that the average American family of four uses 400 gallons of water each day.

For a video tour of Kit's house, check out her article for the Bangor Daily News and keep an eye out for her blog posts, too.

It is the really nice article online here you have to got it robux free no verification so share this information to all friends.