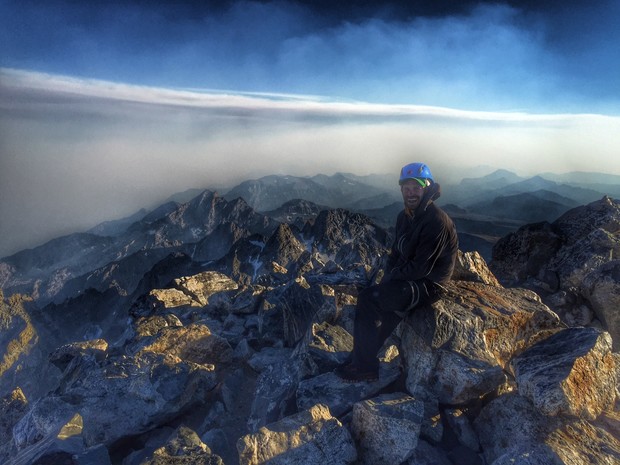 Burke lookin' a little cold — and probably relieved to be in the seated position — on his 50-peak traverse in the Tetons. Crista Valentino photo.

Ryan Burke of Jackson, Wyoming, is officially the first person to traverse all 50 of the prominent peaks in the Teton Range—and he did it in seven days.

According to a recent story on Pitch Engine, Burke began on the eve of August 20 — after an eight-hour work shift — by kayaking across Jackson Lake. His first summit was Ranger Peak, and over the next seven days, for 14 hours a day, he'd summited every peak in his path until he reached the top of Mt. Glory on Teton Pass.

The traverse includes a metric ton of bush whacking, route finding, and the ability to climb technical routes on peaks like Mt Moran, Mt. Owen, The Grand Teton and The Middle Teton (just to name a few) unroped.

For Burke, the traverse also included a bear sighting in the dark, 65-mile per hour winds,  a chipped a tooth, rock fall, and spreading the ashes of a lost friend on all 50 peaks.

He also managed to expand our perception of what's possible.

For even more deets, read the full story on Pitch Engine.

Train At Home During COVID-19 With Zahan Billimoria

Train At Home During COVID-19 With Zahan Billimoria

Check out Samsara MTN Training's Bodyweight program if you are looking for a way to stay fit while staying inside. Zahan Billimoria photo. If you’re stuck inside for the foreseeable future, and would rather be out playing in the mountains, there’s still plenty of things you can do to pass the time productively. Might we suggest something to put high on that list: checking out Zahan Billimoria’s Samsara Mountain Training bodyweight workouts. Z is now offering part of the classes for free

Ever look at a mountain and think: “Holy sh*t, that looks even harder to descend that it does to climb?” Cerro Torre might be on top of that list, with its icy spire of a summit that towers high above the Patagonian ice cap below. It’s a summit that might be high on some climber’s ticklists - and some notable ascents have been made over the years - but it was the location of another first just a few days ago when German alpinist Fabian Bühl became the first to climb it and paraglide off the