The first week is always the toughest when beginning a long bike tour. Breaking the butt in, pushing through nagging injuries, and overall adjusting to life on the road. We’ve had many days with snow, wind, and rain thus far making it a little extra hard to roll out of the bag and get motivated in the morning. However, we have reached or exceeded our goal everyday and hope to continue with that trend as we head north. 7 days and 452 miles in. Utah, Nevada, Idaho, and into Oregon today! #biketodenali - @cj_surmounts

Today is Earth Day, and the world certainly looks different than in years past. We’re not just talking about COVID-19 here, but also the fact that we still have more work than ever to do when it comes to keeping our carbon emissions and our environmental footprint in check. Sure, the Earth might have let out a sigh of relief when now that we’re all being forced to stay inside, but it’s a fantasy to think we’re not headed back to our old ways as soon as we can move freely again.

As adventurers, we always ask ourselves about how we can reduce our environmental footprint, especially when it comes to chasing dreams in mountains far away. Let’s face it: traveling to the far-off reaches of the world to go skiing, snowboarding, or mountain biking isn’t exactly carbon-neutral. Over the years, many athletes have taken it upon themselves to forego that heli bump and opt for a foot-powered approach instead, but in many cases that’s still not enough. However, there have been a select few brave souls we’ve been following recently who have done some truly remarkable things in the name of human-powered adventure. Check out their stories below:

What Does it Take to Bike 3560 Miles to Ski Denali? 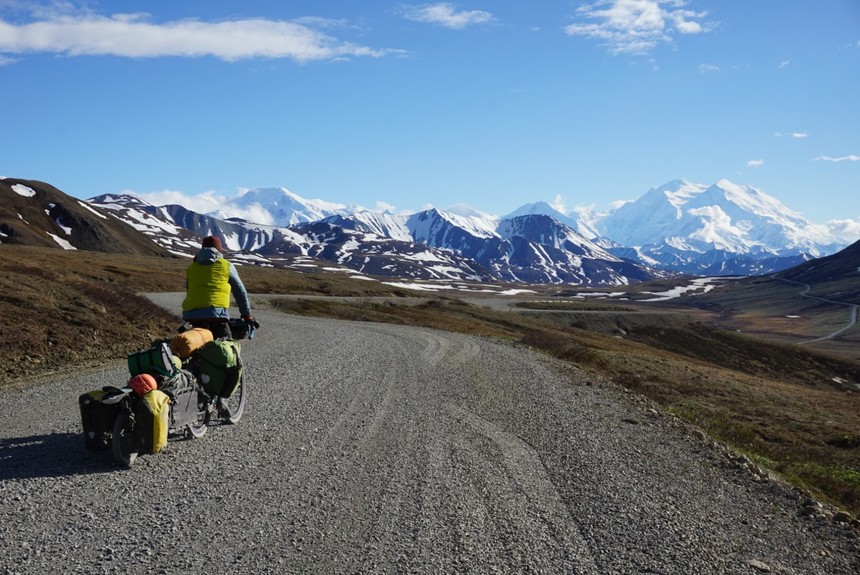 Every spring, about 500 folks attempt to climb 20,320-foot Denali, North America’s highest peak. 90 percent of these climb Denali’s West Buttress because it’s more accessible by air taxi once they get to Alaska. Most fly into Anchorage, drive to Talkeetna, and air taxi to the base of the West Buttress. Naturally, Clay James and Cody Hughes, Salt Lake City-based roommates and active outdoor enthusiasts, wanted to join this elite group. But their plan had a twist.

These guys decided to do this with zero emissions. That meant using no fossil fuels and pedaling bikes with all of their gear, including food, skis and snowboards, the entire way from their doorstep in Utah. Their plan included hiking into the glaciers over jagged tundra to the Muldrow Glacier, a more difficult route, and one far less travelled.

All told, this would add up to 3,560 miles of biking and 63 miles of hiking before climbing the tallest peak in North America. If you flew from Salt Lake to Anchorage, they found out that plane would burn nearly 1,600 gallons of fuel. No one has ever pedaled all their gear and climbed Denali from this distance, but these two made it happen.

Two Brothers Paddle From Alaska To Mexico By Hand

In one of the wilder stories to come out of the outdoors-adventure world so far this year, two brothers have successfully completed a paddleboard journey from Ketchikan, Alaska to Cabo San Lucas, Mexico. Not a stand-up-paddleboard journey, a PADDLEBOARD journey. In other words, these two guys were laying on their stomachs and using their hands to paddle for 2,200 miles.

Pro athletes Nick Russell, Max Hammer, Eric Pollard and friends decided they wanted to re-approach their approach to skiing. So naturally they decided on something most would consider completely crazy: a bikepacking trip from their homes across the West all the way to the summit of California’s Mt. Whitney. They convened in Reno, Nevada, and set out on Highway 395 to find the best backcountry terrain to ski and ride. The entire journey acts as a learning experience for the whole crew, who learn to embrace the unexpected, and revel in a slower and more dedicated approach to doing the things they love.