This past Friday, Andrew Harris, 32, became the first person with down syndrome to successfully climb the iconic Grand Teton. With the help, love, and support from a committed group of family and friends, Andrew's actions inspired a community and redefined what is possible for an entire group of people. We talked to Max Hammer, pro-skier and Andrew's future brother in law, about the experience.

The story and lessons that Max shares about Andrew's story showcase that what is possible comes with a positive attitude. Max also talked to TGR two days before his wedding so we appreciate him taking the time to share one man's incredible accomplishment.

Where did the idea for Andrew climbing the Grand originate? 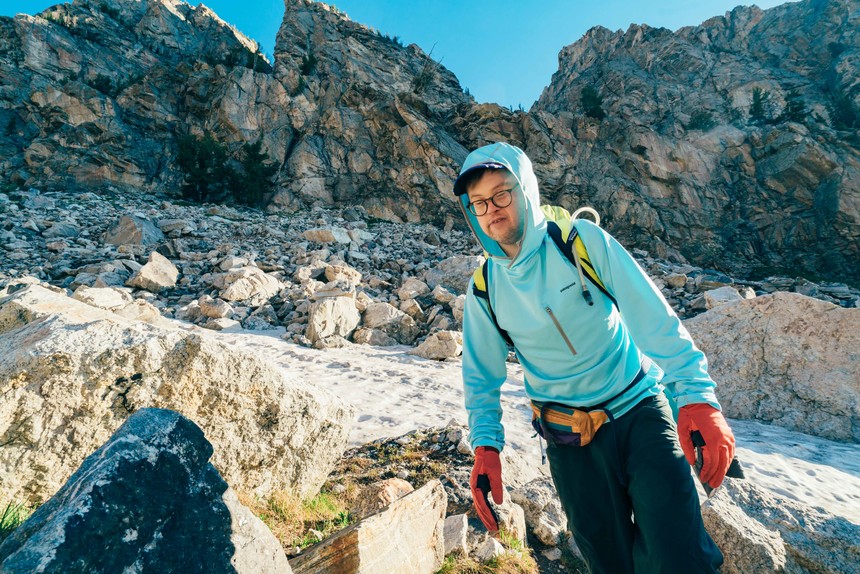 Andrew working his way up to the summit. Julie Ellison photo.

The idea largely came from Amy and me. Amy is my fiancé and Andrew’s sister. All of Andrew’s family is really close, so I’ve gotten to see how active they are with him. When I moved to Reno, Andrew started living with Amy and I so we spent a ton of time with his parents who are still in the Tahoe area.

So I just basically jumped right in and tried to emulate them. Personally, I'm always running, hiking, skateboarding or climbing, so I started taking Andrew with me. We are just doing things all the time. The idea to climb the Grand came two years ago from Amy and I wondered if that was even a possibility. We didn’t do it the first year, then brought the idea up again with Andrew and decided to make it a goal.

What was Andrew's response to the idea?

He was really enthusiastic about it. He didn’t really know exactly how hard it would be but he loves doing stuff with us. We love hanging out with him and he loves hanging out with us. So I think he was like "yeah let’s do it" without perhaps knowing the scope of it. He understood that it would be like things we have done in the past, similar to a long hike and climbing. We tried to give it to him as straight as we could and really gauge whether he was actually interested or not. He never said no, and only got more excited.

How did you train for this? 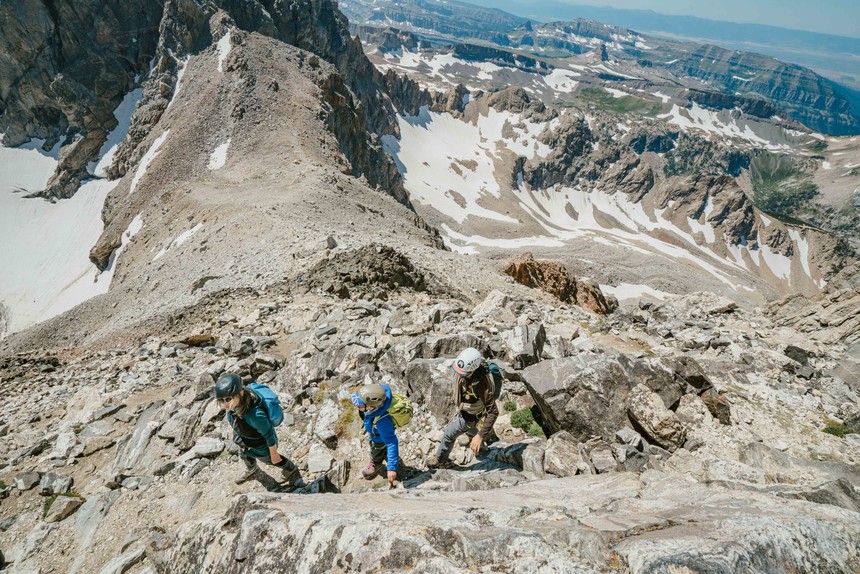 We definitely prepared but it wasn’t too out of the ordinary for Andrew. We hike and run pretty regularly from our house. What we did do is up the amount climbing. We would go to the climbing gym a ton, which is super fun. Then we also went up to Donner Pass and did some multi-pitch climbs as well as a lot of short roping, especially between Andrew and myself.

I knew we would be doing a lot of that so we practiced. We also practiced a lot of rappelling. I knew there would be at least one or two big rappels and Andrew can’t do that by himself. I wanted him really comfortable rappelling with me.

Then between Amy, Andrew, and myself, we practiced team dynamics and movement together in a threesome. Andrew, he has to climb in a little bit different style than other folks and relies on a lot of guidance from his sister. So the way we work is I basically take the lead with the ropes, belays, and anchors. Amy is either on a separate rope or the end of Andrew’s rope and climbs with him. Amy is basically with him every step of the way and I’m doing the system management. We work together as a team to try to build efficiencies and some unique ways of communication.

You had a pretty A+ crew for the climb, how did it come together? 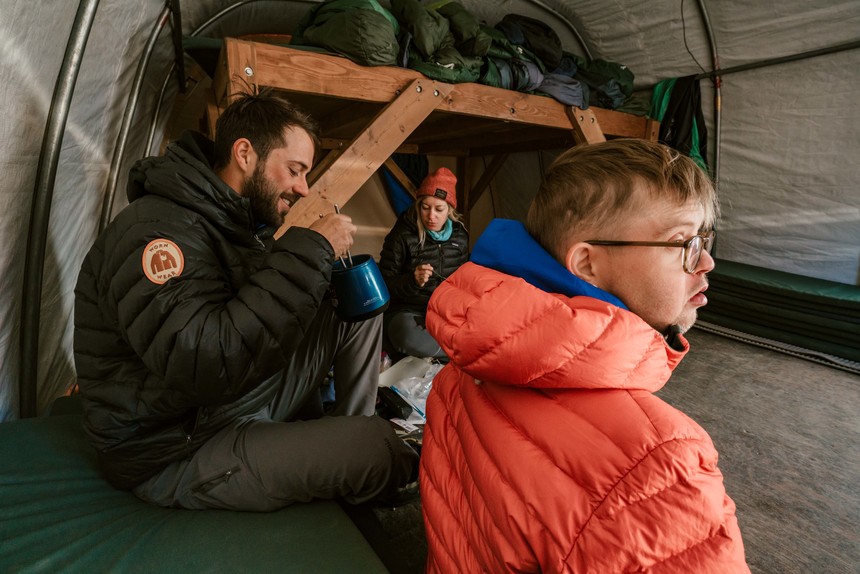 Andrew hanging out with Max and his sister Amy in the Exum hut after a successful summit. Julie Ellison photo.

From my end personally, we wanted to do the climb as a family but I thought it would be cool to involve more people.  So I reached out to Eric Henderson, who has a daughter with down syndrome and knew if someone was going to be able to help us out it would be him. He has been pretty instrumental in gathering this crew and including Julie Ellison from Climbing Magazine. I reached out to Mark Fischer, who is a mountain guide and a filmmaker himself. Zahan Billimoria (Exum Mountain Guide) is a longtime friend who last minute was able to come. We would not have been able to do this without him, he knows that mountain so well. With him, our efficiency and route-finding were streamlined.

How did the day of the climb start? 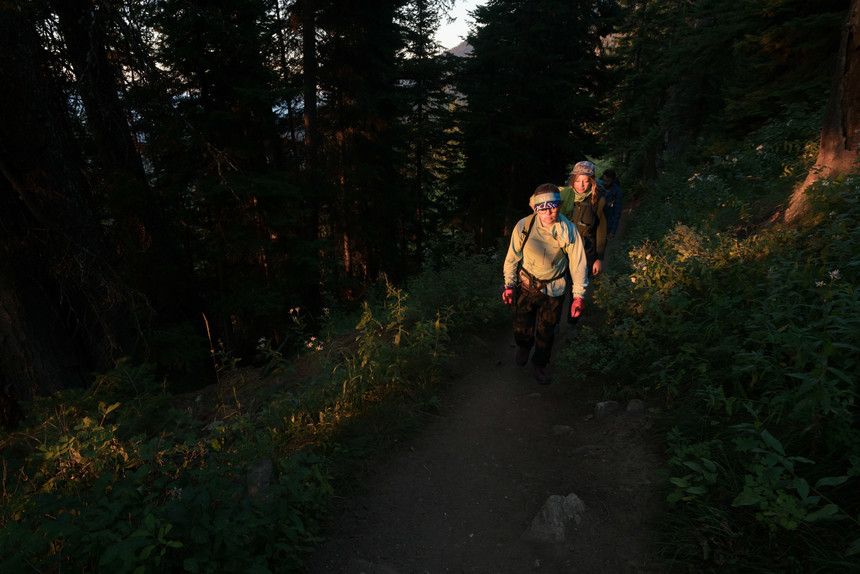 Hiking up from the Lupine Meadows trailhead. Julie Ellison photo.

We started about 5:30 AM in the dark. Andrew was excited.  We have been talking about the climb enough and telling others about it so he understood it was more than a normal hike. We got there, met at the trailhead and then started up the trail under headlamp. The first part of the trail he really flew. Andrew is a great hiker and runner especially when the trail is well maintained, he just crushed it.

We made really good time to the meadows, after that the trail becomes a lot of loose rock, scree, and boulder fields. We started to slow up just a bit there. If there is one challenge for Andrew, I would say that is loose rock and footing, even more so than the technical climbing. So we took our time and picked our way through. It took a lot of spotting and coaching with help from Zahan and Amy. We plugged away and took a break at the lower saddle.

How was Andrew's attitude through these difficult moments? 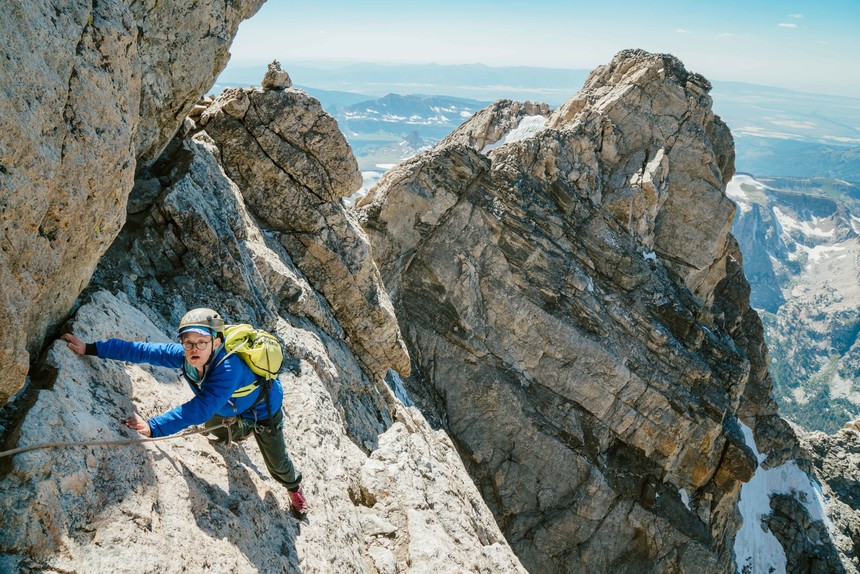 There were moments of frustration. Nothing close to a breakdown but he would be the first to tell you he doesn’t like that loose stuff. The cool thing about Andrew, especially when he is with Amy, is he really takes on the energy of the group. He feeds off the energy of others, Amy sets the tone all day of laughter and fun. She does through jokes or singing a song. Sometimes she might be a little more serious if he needed to focus.

Describe that final push to the summit. 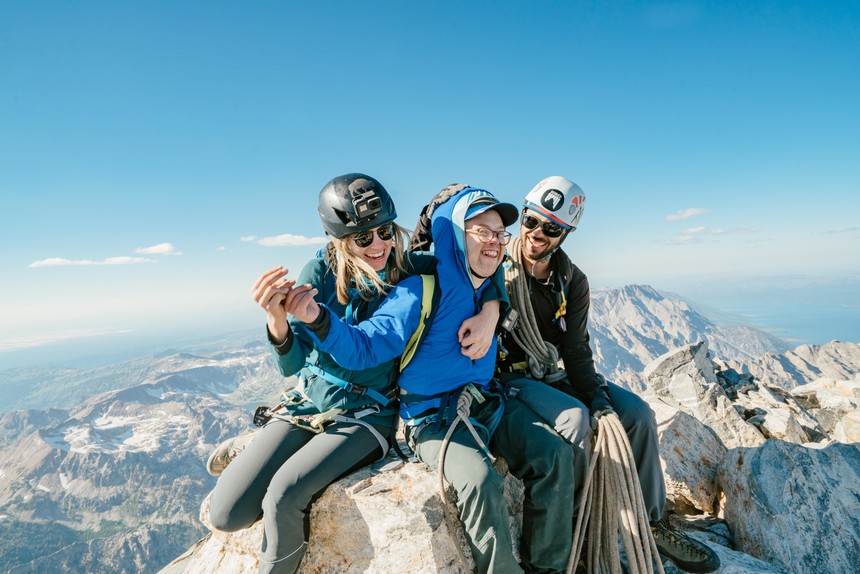 The final push was cool because after the lower saddle you can finally start to see the peak. For me, it starts to be the fun part. Less hiking, and more scrambling and climbing. So we ditched a bunch of weight and roped up from there. We were originally headed for the Upper Exum route but decided as a group that we were taking too long and went for the Owen Spalding route.

Once we got to the technical climbing part Andrew really started speeding up and loving it versus the loose gully. It was pretty funny because as soon as he got exposed he got really happy. He was totally comfortable in the environment. I’ve been up there with other folks and it's safe to say that he loved the exposure and clean climbing as much as anyone I’ve ever been around. He was just buzzing with excitement. 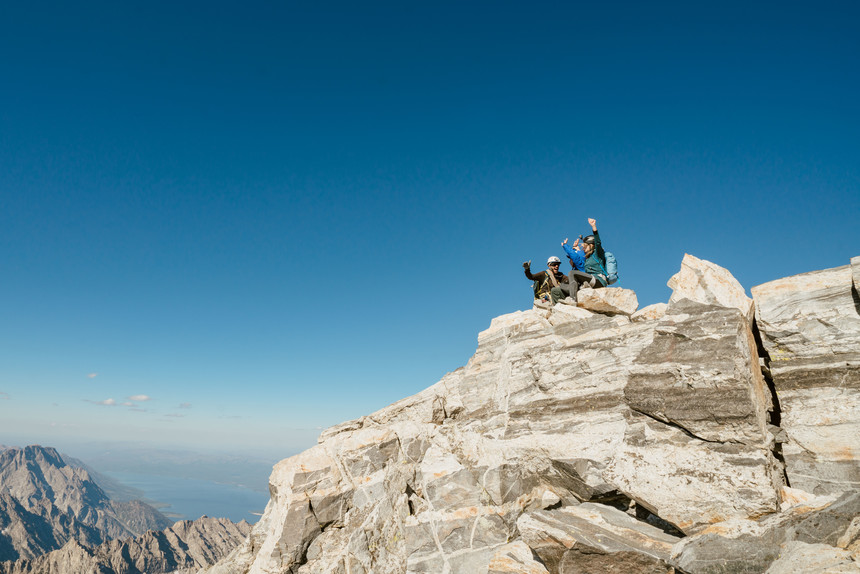 At this point, I was really just listening to Andrew and Amy climb, which is a pretty vocal affair. I was up at the belay station listening to them giggling, laughing, and singing. The whole time they were laughing away

We made it to the summit around 5:30 PM, basically twelve hours from the car to the summit. It was a fairly late summit but we knew we had enough light and good weather to make it down safely. We only spent a couple minutes at the top before we descended, but those couple minutes something I'll never forget. At that point, Andrew was the happiest little guy I've ever seen. There was a real spirit that was bursting out of him that couldn't be caged. For Amy, myself, and everyone, it was truly something special be a part of and feed off that energy.

What do you want people to take away from this experience?

Let me put it this way I’ve never had a deep relationship with someone with down syndrome until Andrew. I had some surface level interactions with friends in high school and growing up. Having known Andrew I can say every day with him and every activity together is elevated by his presence. He never takes away and it's never a chore. It’s an equal relationship for both of us. We’re friends and brothers first and foremost, the down syndrome is way down the list.

What's next for Andrew? 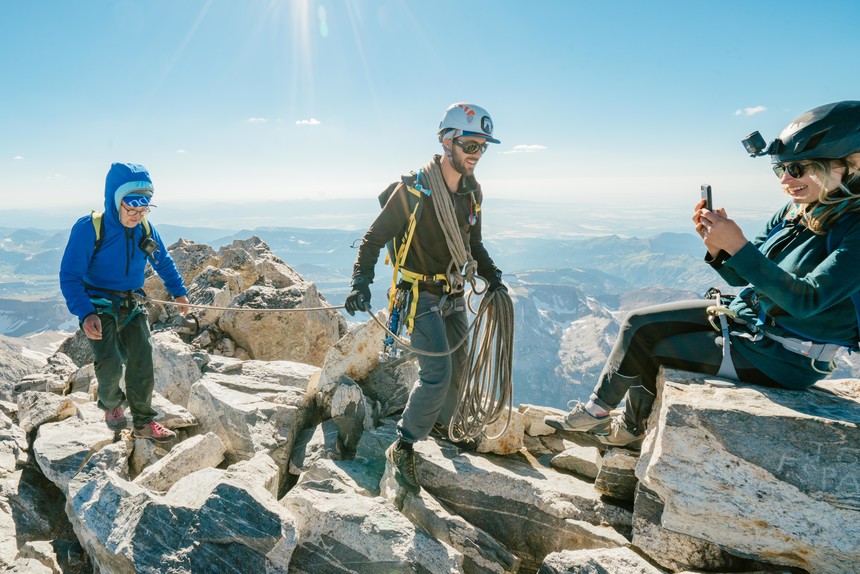 Next step is finding a job, he really wants one. Andrew is always active. He is already on to the next thing. Whether it’s the next social event, birthday, or next friend he is going to see. We don’t have any big plans as far as something like the Grand, just keep rolling with life until something cool and challenging comes up.

It is a beatiful story! I’ve also read a research on people with intellectual disability job prospects on australianwritings.com.au and I have to admit that this is a huge problem for modern society. Articles like this should be shared among potential employers to encourage them hire people with minor disabilities.