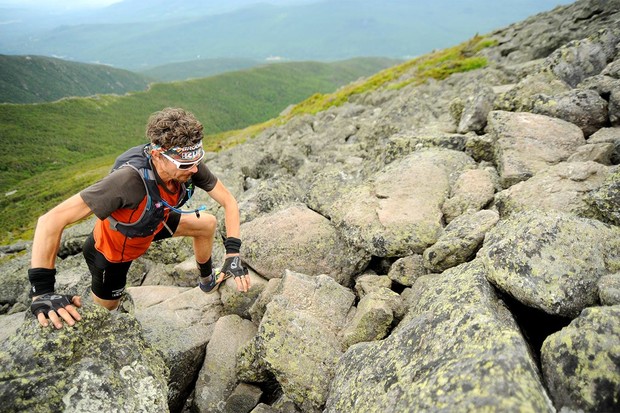 Scott Jurek broke the fastest time for a through-hike of the Appalachian Trail by a mere three hours, but now has to pay a fine for drinking champagne at the finish line on Mt. Katahdin. Photo via Scott Jurek.

In a spat that would only have happened in a state with as little lawbreaking as Maine, ultramarathoner and Appalachian Trail record breaker Scott Jurek will get just a $500 fine for drinking champagne on top of Mt. Katahdin, and will avoid a number of other citations he received during his summit celebration on Katahdin this past July.

Jurek broke the world record for the quickest Appalachian Trail through-hike, beating Jennifer Pharr Davis' 2011 record by a mere 3 hours and 13 minutes, clocking a total time of 46 days, 8 hours, and 7 minutes over the 2,189-mile trail. Jurek averaged 50 miles a day while covering 515,000 feet of elevation change. This all despite having to wear braces on his legs after knee and quad injuries suffered during the first week, which dashed his hopes for breaking Pharr Davis' record by four days and had him seriously thinking of quitting with just five days left to go, according to Runners' World. 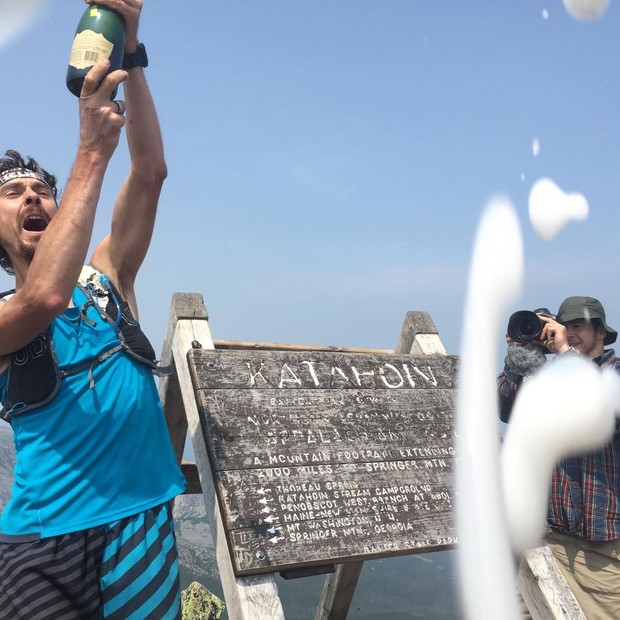 Jurek celebrated his finish atop Mt. Katahdin, the northern terminus of the Appalachian Trail, by spraying and drinking champagne and celebrating with a group of people that grew to roughly 50, including friends, supporters, media, and others on their own summit trips who joined him as he kissed the summit sign and his wife Jenny, who acted as his constant support staff during the entire mission. But despite Jurek's heroic finish and razor-thin record margin, the grizzled narcs of Baxter State Park were unshakable, slapping the record breaker with citations for breaking multiple park rules including drinking, littering, and bringing a group larger than 12 to the summit.

The littering citation was even petty enough to be directed entirely at Jurek's spraying of champagne, which park officials described as leaving the summit smelling like "a redemption center" (Maine is one of the few states were you can redeem recyclable bottles for cash at, you guessed it, a redemption center), according to the Bangor Daily News. Penobscot County District Attorney R. Christopher Almy said Baxter State Park officials were "somewhat miffed" at seeing the large media event take place after feeling they had an understanding with Scott and his supporters about what the park rules were.

In the resulting plea bargain, Jurek had to admit to bringing booze to Katahdin's peak, and in exchange was hit only with the drinking citation and a $500 fine. "I drank champagne after a 46 day life changing journey in the woods," Jurek wrote on his Facebook page, "and it was the best $500 I ever spent." Let's just hope Clif Bar picked up the legal tab.

Maybe Maine doesn’t want self absorbed assholes and the media following them around sullying their nationally renowned treasures. Would you be happy with hundreds of people partying on top of the Tetons every week or so?

Climbing isn’t usually a competitive sport, but there are times when it certainly can be. Chasing speed records on long hard routes has always caught the attention of climbers looking to prove themselves, and that has reached across climbs like El Cap’s the Nose, to Everest, and all the way to short classics like the Naked Edge just outside Boulder, Colorado. That particular climb, a six-pitch 5.11b is considered one of the most classic climbs in the country, and has seen numerous speed