I never thought I’d be so obsessed with skiing that I would base my entire life around having the freedom to ski absolutely everyday, but that’s what happened. I never would have thought I’d be a waiter, caterer, part-time landscaper, and half-assed freelance writer all at the same time, but that’s what I do. My college degree isn’t doing me much good, but I haven’t missed a powder day for 11 years and counting. Shit jobs have given me the freedom to ski as much as I can, live in an incredible place, and still make a living, sort of.

This series will attempt to profile some of the best and worst shit jobs in a ski town. Don’t get me wrong, in no way do I intend to bash professions like these, they are a means to an end, the axis upon which our mountain lives spin. Without jobs like these, how would you ski over 100 days a season and still be employed? 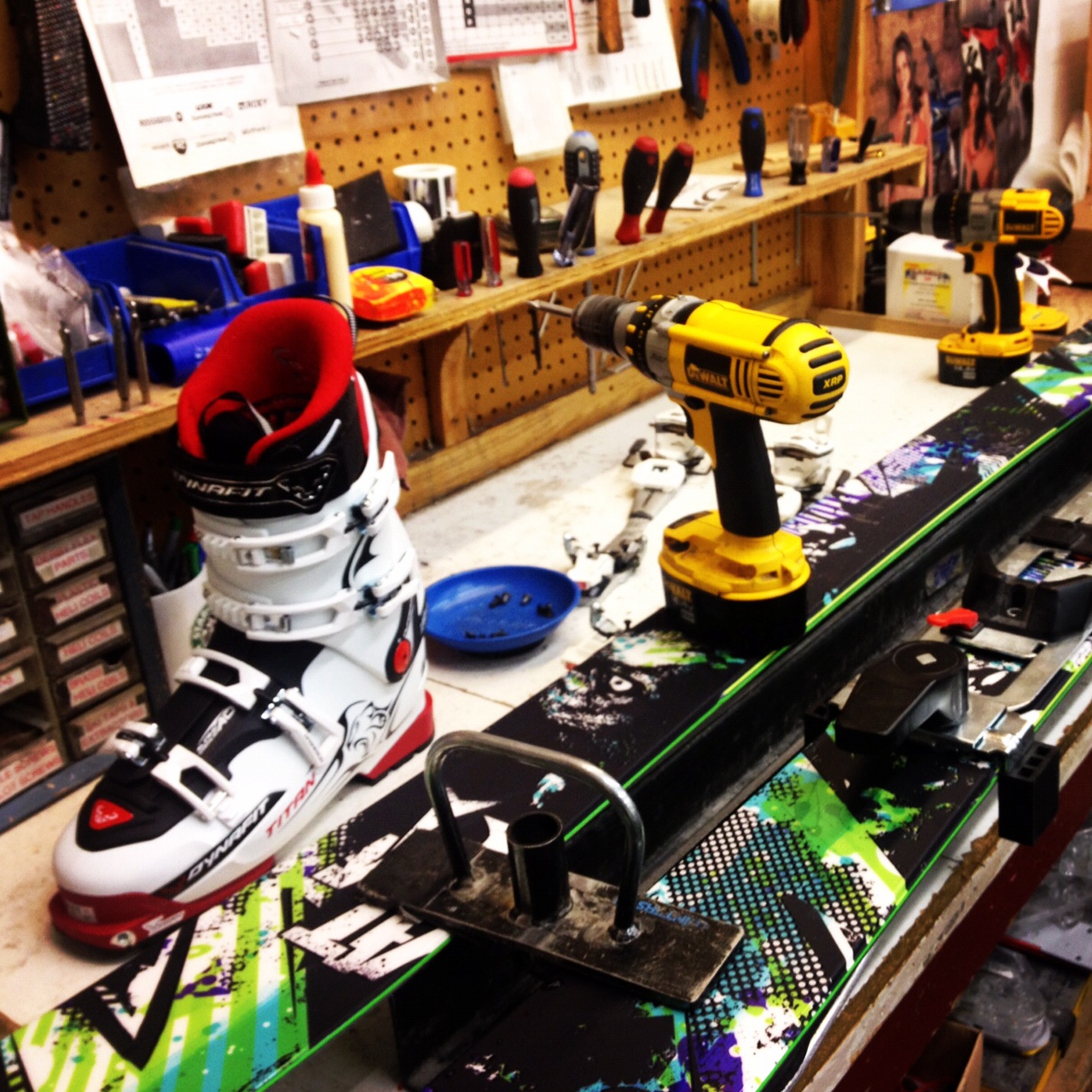 When I moved out west in 2001, I was a fresh-faced college graduate with stars in my eyes. I moved to Tahoe for “a year to ski before I get a real job.” I had a pickup truck full of everything I owned, no job lined up, hell, we didn’t even have a place to live. Fortunately, I had some experience mounting and tuning skis at a shop in my hometown in Connecticut and my connection in the Tahoe area recommended me for a job at a local ski shop working as a night ski tech.

In hindsight, I realize it was a pretty coveted position that I was lucky to just waltz right into. I was working in a high volume ski shop, my shift didn’t start until 4 p.m., and I didn’t have to work retail or rentals. As a mountain town newbie, this job helped define my experience as I started merrily down the path of ski-bumhood.

Ski shops offer a plethora of shit jobs for mountain town residents. Working the night tuning shift is ideal because you can ski all day, everyday, and still get to work on time. Many ski shops offer flexible hours or ski breaks for their daytime employees, working retail or rentals, however, puts you into close and frequent contact with the general public. Gapers, Joeys, Beaters, Cods, call them what you will, but families on ski vacations can be frightening beasts. Working in the back shop of most ski shops allows you very limited contact with these crazed and confused vacationing animals, especially when you work at night since the shop is closed half the time you’re there.

Working in the back is also nice because you can show up looking like you just skied all day, because you did, and nobody is likely to notice how you smell over the stench of ski boots, p-tex, and wax.

Taking care of your equipment is a no-brainer, and your skis should generally be running faster than your bros’. Everyone in town will eventually ask you for favors, mounting, basework, tuning, you name it, people in ski towns need your services and are willing to trade for them. A nearly unlimited supply of beer will be available, which is nice since you only make around 11 bucks an hour. When you already have so much beer you don’t know what to do with it, you can arrange for other things you need like food or weed. In some cases you might even get to help out local pros. Eleven years ago I got to work on prototype Spatulas and a number of other ridiculous projects for my hero, the late, great, Shane McConkey.

As a shop employee you’re entitled to discounts and deals on equipment. The “shop deal” is generally the highest level of discount, besides getting something for free, and helps a broke-ass ski bum look pro out on the hill. You may also have the opportunity to get to know local ski reps, maybe wrench for them at demos in trade for some hot new gear. Not to mention the nearly unlimited random skis that are left behind at the shop, you’ll have rock skis for life, or be able to build that ski fence or Adirondack chair you’ve always dreamed of.

So, you’re everyone’s friend, you’ve got all the beer you can drink, you’ve got the perfect ski schedule, and your skis are in excellent condition all the time, best job ever, right? Well, the story doesn’t end there. The obvious awesomeness of being a night ski tech is balanced pretty equally by some not so awesome stuff, like acids to bases.

First, being a ski tech doesn’t pay incredibly well. Back in ‘01, I made 9 bucks an hour for an entire winter, my boss didn’t even consider giving me a raise even though the back shop made him many tens of thousands of dollars of profit. Years of experience later, and I was nearly topping out the ski tech pay scale at 14 bucks an hour, better, but still barely getting by. The likelihood of working 40 hours a week is pretty low, except for holiday weeks when you’d pay to get out by midnight.

You may also find yourself working with jaded, crusty locals. The kind of guy who’s pissed at everything for no reason, doesn’t go more than a minute without a chew in his mouth, and has a breathalizer in his car because he’s had so many DUI’s. The kind of person who’ll bring you down no matter how good of a day you had on the hill, or throw a ski across a room because his base-weld didn’t hold.

Potential for injury is pretty darn high while working with grinding machines and sharp metal edges. The slightest mistake while working with a belt or stone grinder could permanently disfigure your hand, one slip while hand-edging that “race tune” and you’re on your way to the hospital. Even if you never seriously injure yourself while tuning you’ll probably be plucking metal shavings from your fingertips almost everyday. On the bright side, your thumbs will never be stronger from the constant scraping of p-tex and wax. The ventilation system in your shop is also probably terribly inadequate. Sure there’s a vent hood, but you’re still breathing noxious wax, p-tex, and epoxy fumes on the daily.

The generally low-stress environment of the back shop will occasionally be shattered by the retail guy who promises his customers everything to be done immediately. You’ll show up to work to find five “now mounts” that have to be done in the first hour of work, or have your Zen tuning flow interrupted by something that needs to be done “right now.”

All the free beer in the world is great, until you find yourself on the fast track to becoming yet another ski town alcoholic. Three to six beers a day is one thing, but that’s before you leave work, the last thing you need is a DUI to end up like the jaded local that you hate working with.

Oh, and did I mention the monotony. Believe it or not, doing exactly the same mind-numbing work day after day could drive you a little crazy. It’s exactly the kind of work that could drive a person to drink, at least you’ve already got all that beer. …

Low pay and monotony aside, being a ski tech is among the more enjoyable ski town jobs I’ve had. Starting my time in a mountain town with a night job, however, is likely one of the main factors that doomed me to a life of working shit jobs just to ski pow. Once you get used to skiing everyday, there may be no going back. So, consider yourself warned, and if you’ve got an unquenchable thirst for skiing and beer, then this might just be the shit job for you.

From The Column: Shit Jobs

Feeling… naked, exposed, maybe even betrayed (?). Never read a piece that “nailed” it so accurately on the head! Nice job!!!!!