There have been a handful of what could be aptly dubbed phenoms in snowboarding. While guys like Shaun White and Marcus Kleveland have been in the snowboarding's public eye since childhood, their path to notoriety was through the competitive circuit and have followed a pretty formulaic architecture: Show precocious talent by winning a major event at a young age, and repeat that competitive success over an extended period of time.

That, however, was not the path to snowboarding stardom that Calgary's Jed Anderson took.

Anderson, who had a successful competitive career at a young age left the contest circuit relatively early to focus on filming progressive parts in the streets. Anderson was among the first snowboard phenoms to find high levels of success through filming parts and almost became the anthesis to his more competitive counterparts.

“I think I was just like any young kid snowboarding and trying to get better, I didn’t know filming was even a thing, so I would just do contests,” Anderson told TGR. “I had a lot of fun doing them, but I started to watch videos like Love/Hate and the Robot Food films. It introduced me to a world I didn’t know existed.” 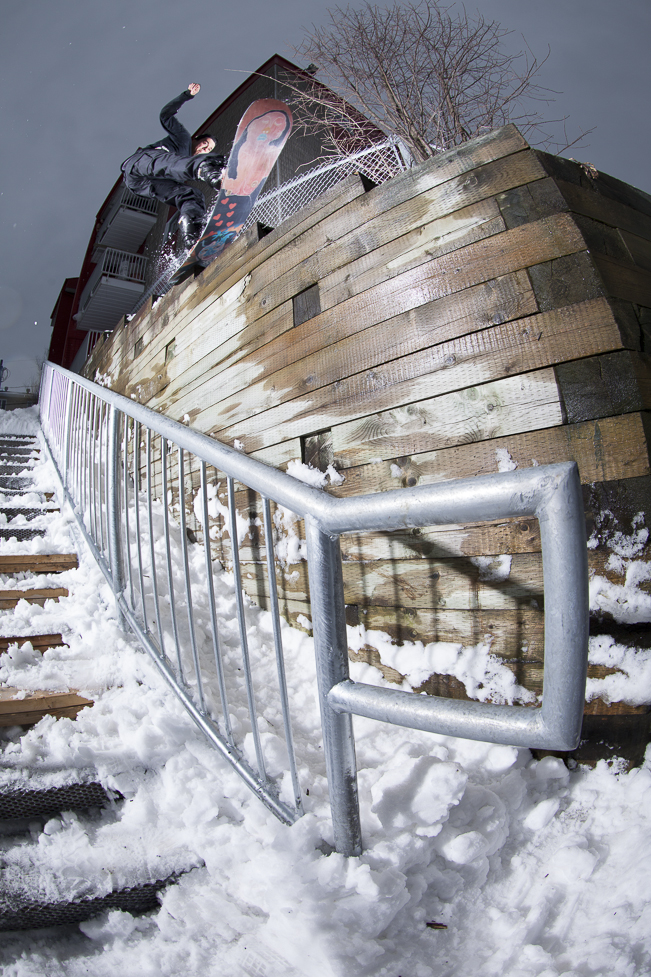 Finding inspiration in the videos and magazines that were documenting the meteoric progression of snowboarding's early years, Anderson started to lose interest in competitive snowboarding and found himself drawn to the urban features in his hometown.

“The idea of being able to just go to spots around your city with friends was really attractive to me,” enthuses Anderson. “It was an easy way to imitate what was happening in the videos I watched. There are a lot of good spots in Calgary and I was lucky to learn there. It’s a decently sized city that gets snow pretty often.”

It didn’t take long for people to notice Anderson’s riding, after filming with Videograss’ Justin Meyer for the popular Bear Mountain web series "Sunday In The Park," Anderson was approached by prominent filmmaker Joe Carlino and asked to film for the highly anticipated Transworld Snowboarding video These Days.

These Days was Transworld’s first feature film and was noticeably absent of star power. Instead of leaning heavily on pros and featuring one or two up-and-comers, These Days flipped the script and focused entirely on rising stars. Anderson at the time was still figuring out his transition from sponsored contest kid to video pro, but after These Days dropped it was clear that he had found his calling. 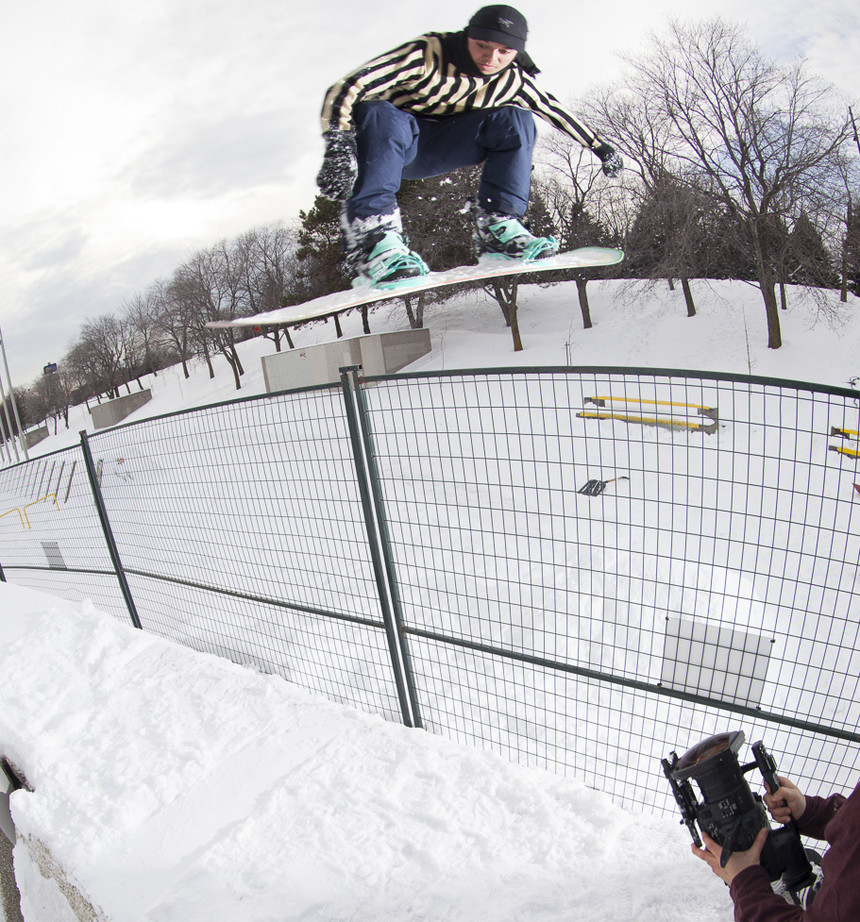 Anderson at home filming in the streets. Alexis Paradis photo.

“I realized that filming was the only thing that I wanted to do,” explains Anderson. “It’s awesome to work towards a project. Every time you get a clip it’s like one step closer to making something you can be proud of. When you have that final product it’s super satisfying.”

Transworld’s first feature also signified a paradigm shift in snowboarding culture as it seemed to be the end of the Forum-inspired street era. Jeremy Jones and JP Walker were the undisputed heavyweight champions of urban snowboarding, and reigned supreme for over a decade. There had been other crews that found their own niche in the streets most notably the Love/Hate and Neoproto crews, but there had never been a more influential crew than the Forum 8, and when it came to street snowboarding Walker and Jones had an influence over everything from the way snowboarders dressed to trick selection.

While These Days featured a number of talented riders, it was two Canadians–Anderson and fellow Canuck Louif Paradis–who not only stood out amongst their peers, but also set a new standard for street style snowboarding. It wouldn’t be long before the curly haired kid from Calgary was the most influential street rider on the planet.

The follow up to Transworld's These Days was the highly anticipated Get Real, which was released in 2009 and solidified Anderson as the next big thing. His performance was so next level that he secured the film's ender, further intensifying his star power.

At that point, Anderson had become a polarizing figure in the snowboard world as everything from his style of dress to the width of his stance became fodder for both industry insiders and snowboard fans alike. Snowboarding at the time felt homogenized as the creative outcast spirit that had birthed the young sport had all but dissipated. Anderson was a breath of fresh air for his creativity both off and on a snowboard, his approach offered something new and fresh, a talent so supernal nobody could deny his prodigious gifts for board control. 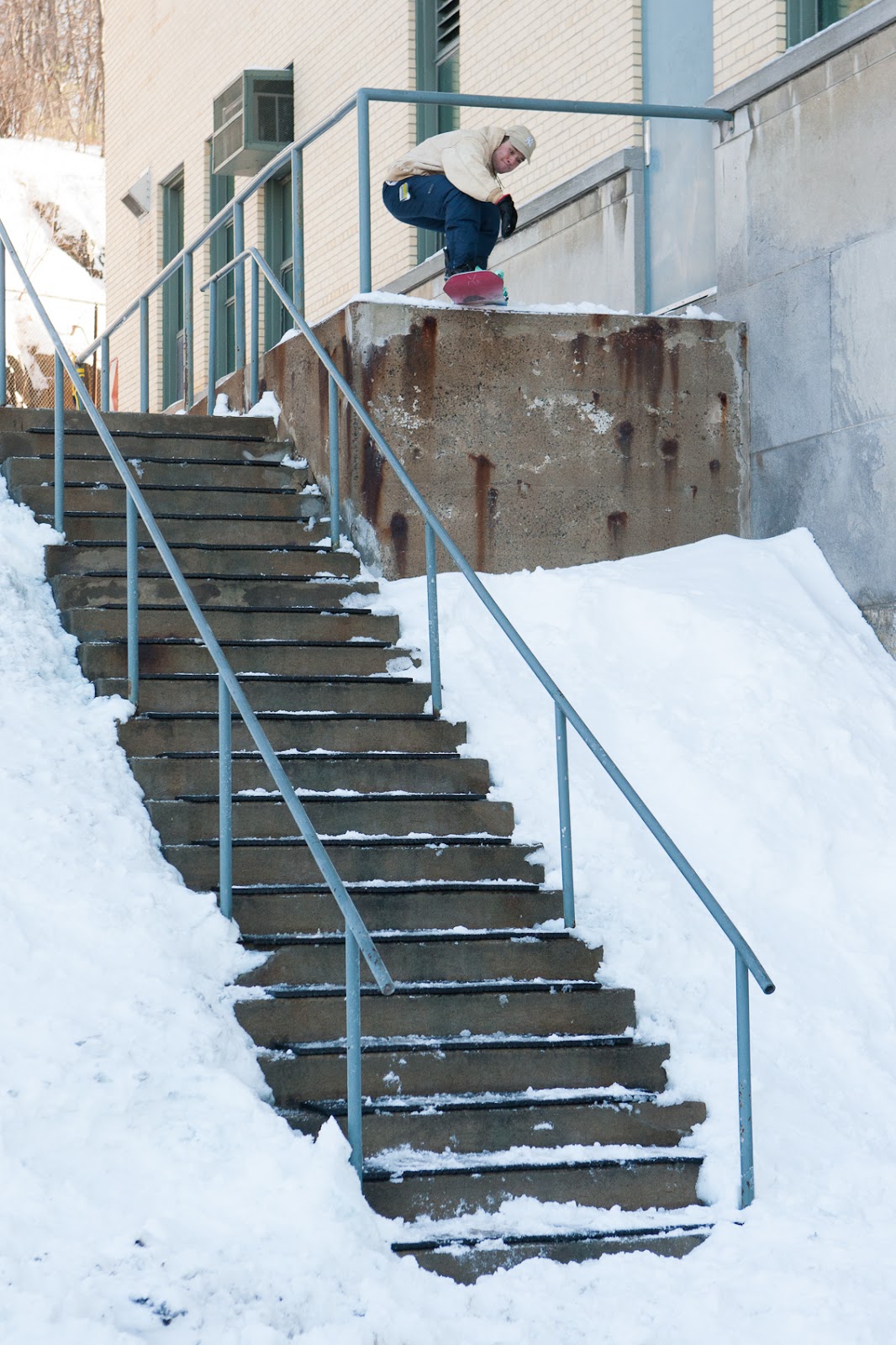 In a controversial but not entirely surprising move, Nike again attempted a foray into the snowboard world and started scooping up some of the best riders on the planet. It wasn’t surprising that Anderson found a place on the team and became one of Nike’s most highly visible stars. Once again Carlino and Anderson set out to create cinematic magic with Nike’s first film Never Not.

After Never Not, Nike began working on their second full-length film when, seemingly out of the blue, they made the decision to divest from snowboarding. That left Anderson in a precarious situation.

“Losing Nike sucked, but I honestly have nothing bad to say about them,” Anderson told TGR. “They were great to me, honest and upfront. I am super grateful for all of that it was an awesome time. I wish it didn’t happen but I understand why it did. At that point I was still with Salomon, so it was okay.”

Anderson didn’t seem phased by the Nike departure, while many of his former teammates scrambled to find projects, Anderson continued to film to the beat of his own drum.

In 2014, Anderson released a jaw-dropping 13-minute short titled "Crazy Loco" with Salomon. The film was a chance for Anderson along with filmmaker Tanner Pendleton to creatively express their artistic vision and acted as a glimpse into the life and thought process of one of snowboardings most polarizing personalities.

After the release of "Crazy Loco" Anderson reunited with the crew at Videograss to begin filming for Visitors, VG’s 18-month project. Just before the video was to premiere at SIA in January of 2017 it was announced that Anderson had been dropped by Salomon. While Anderson had started diving into interests outside of snowboarding, the announcement was still shocking for many involved, including Anderson.

“I honestly don’t really know what happened,” Anderson tells TGR. “I think they felt that I wasn’t bringing enough to the table or that I just wasn’t a worthy investment for them anymore. It sucked and I was pretty hurt with their decision.”

Anderson is now living in Toronto and is one of a handful of top tier pros without major sponsorship. He could very well be the most influential professional snowboarder on the planet without significant backing.

It almost seems unfathomable that he wouldn’t be supported by one of the major snowboard brands. His riding over the past decade has been nothing short of transcendent. To allow someone with not only the talent, but also the magnetic personality and creative vision of someone like Anderson to drift into obscurity would be tragic for our both our industry and our culture. 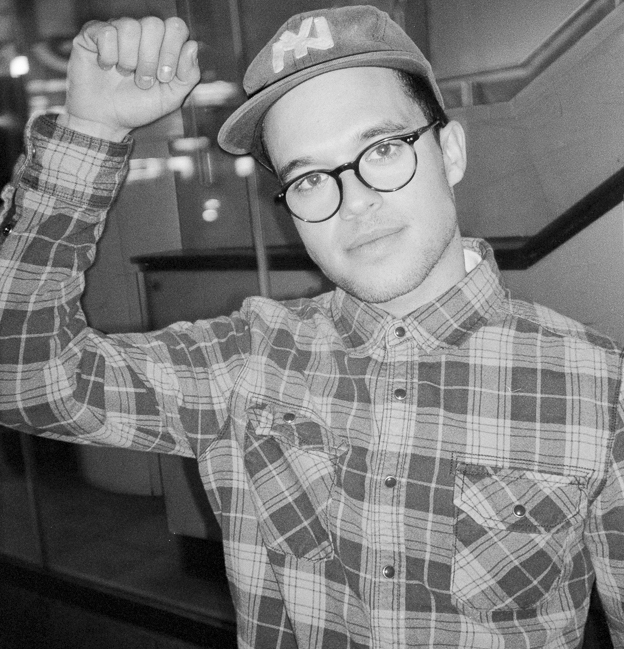 Anderson seems poised for the whatever comes next. Alexis Paradis photo.

Whether or not Anderson still has the motivation or willingness to continue pursuing snowboarding will ultimately be up to him, but for now Anderson is ready to move forward with a company that can support his vision. For the sake of his fans, snowboarding, and our ever changing cultural landscape here’s to hoping he finds a new home soon.

“It would be tight to get support from a brand who understands my vision and the way I want to portray my snowboarding," Anderson admitted to TGR. "I think a lot of people get the wrong idea of how I present myself in this industry. So yeah, it would be cool to work with some like-minded people."

IPRW 2019: TGR’s Athletes and Production Brush Up on Mountain Safety

IPRW 2019: TGR’s Athletes and Production Brush Up on Mountain Safety

Practicing avalanche rescue shoveling techniques. Max Ritter photo. Every December, TGR athletes and production crews gather to work on backcountry and mountain safety skills during the International Pro Rider Workshop (IPRW). This year, after a multi-year hiatus, we were lucky enough to have Jim ‘Sarge’ Conway leading the charge on safety again. Sarge originally conceived the idea of IPRW with TGR nearly a decade ago when he saw the opportunity to bring together some of the best minds in