Beautiful and functional—what more could you want from an outhouse. AIA Photo.

Rocky Mountain National Park’s new outhouses are the shit. Seriously, they're such a big deal that they were awarded The American Institute of Architects (AIA) Small Project Award. According to the AIA, the park’s new outhouses stemmed from a special collaboration between the NPS and ColoradoBuildingWorkshop, which is part of CU Denver’s design-build program. Together they created the shiny new Longs Peak Toilets, which at first glance feel more like an abstract art installation than a toilet. These boxy and rocky structures tastefully mirror its nearby surroundings so that they’re not a complete eyesore on the way up to RMNP’s Longs Peak.

But this design is being celebrated for more than its aesthetic, it also has a minimal human footprint. The main foundation is built from “gabions”, which are these metal cages subsequently filled with rocks from the surrounding area. After building materials were  helicoptered in and llamas and mules brought all the other necessities, it only took students eight days to construct the outhouses in the middle of the backcountry. Their estimate is that with this design, the impact on the environment was reduced by 33%.

While this hype might appear a bit much for a loo, many national parks are in a poo crisis. Mount Whitney started a "Pack Out Your Poo Policy"  in 2007 because human waste was accumulating faster than it could biodegrade. In Denali, it's estimated that from 1951 to 2012, 215,000 pounds of poop have piled up on the mountain. So in the end, smart solutions to human waste management are beneficial to everybody. 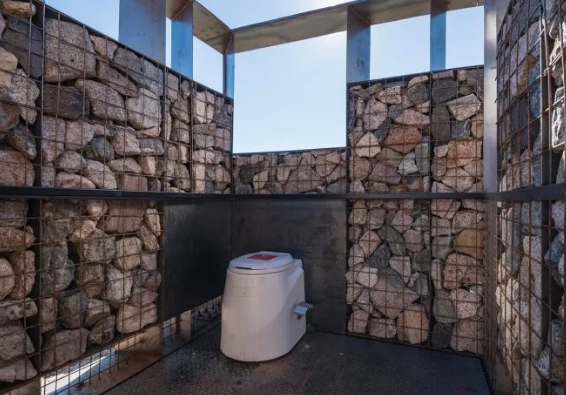 The design mirrors its surroundings, so it doesn't feel out of place. AIA Photo.

In RMNP’s case, visitation has doubled, and with severely outdated toilets rangers found themselves constantly hauling waste down the mountain through the use of llamas. These new toilets give them a leg up on the poo dilemma, starting with its new design. It drains out the urine—similar to how any mammal would go in nature—which leaves only dry waste to be retrieved. It’s a similar system used in Rainier’s camp toilets and the outhouse on Angel’s Landing in Zion.

Plus, the best part about the toilets is they’ve got an open-air roof. Now you can revel in the Milky Way while doing the deed.

This series is really important because the project I am doing is related to it. That is the reason behind why I attach with it a lot. The essayscribes.com share videos.

A nice thought from the young masterminds. An awesome idea behind building an ecofriendly toilet. The design attracts me a lot. SEO companyEvery simple and elegant design that matches with the surrounding ambiance

This is an interesting topic and building toilet in the tourist place is really good as it will be helpful for the tourists but we should make sure that it should be maintained well and cleaned. The author as clearly explained about the place in the post hostsailor