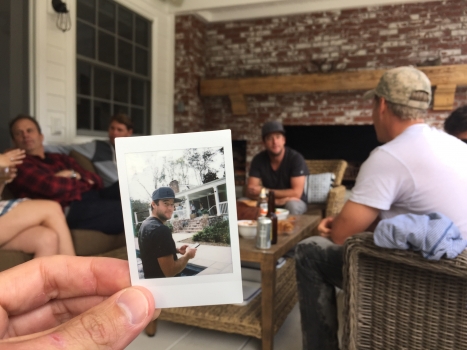 Big wave surfer Ian Walsh loves nothing more than family barbecues, friends and sold out movie premieres for his new film Distance Between Dreams. And what better venue to pack with salty haired, sun kissed barnacles than the World Famous La Paloma Theater? Located one block from Moonlight State Beach, La Paloma opened its doors in 1928 and has become the staple for surf film premieres.

I could go into a detailed review of the film, but you should save yourself the time and head over to Red Bull TV where it's still available to stream for free! Go go go! What do you get when you mix gallons of PBR, pints, a table, and a ski town? The Gelande Quaffing Championships, that's what.  Held at the base of JHMR, the annual drinking game sets two colorful, and rather beer-ful, teams of four against each other in a true competition of skill, speed, dexterity, and beer guzzling prowess. Frosty pints of beer are sent careening down a table only to be caught with finesse (or not) by a fellow athlete. The beer is then quickly deposited into the gut of the

The Ottawa River is known by paddlers for its clean and pristine environment. Typically when you paddle  towards The Lorne Rapid where the world famous waves of Bus Eater and Garburator form, you will only find tall pines, ospreys flying over head and a few paddlers hanging out in the eddy waiting their turn for a surf. Last week though, that quiet stretch of river got turned into a coliseum for the 2015 ICF World Freestyle Kayak Championships. Packed grandstands lined both shore for the

As the days get longer and the sun warmer, the snow and ice that has accumulated over the past couple of months turns into water and trickles down the watershed to fill the Ottawa River. When most of us see this as hope that warmer summer days are around the corner, our fellow paddlers and surfers closely watch water levels to make sure not to miss the perfect wave when it comes in. I myself have been relentlessly checking the gauge and the wave, being way too excited to try the new SurfTech