Editor's Note: TGR's very own Jon Grinney gives you the lowdown on Freebords. Whether or not you're into it, Freebords are a pretty interesting take on typical skateboards. 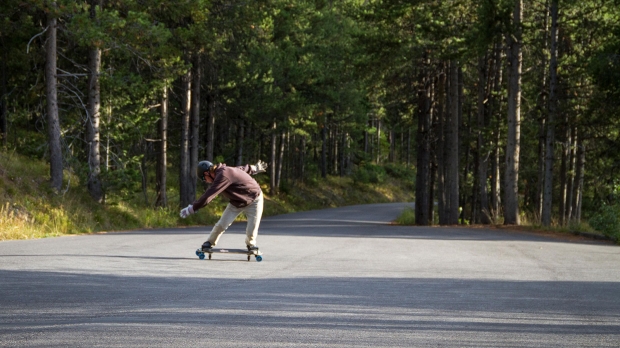 Is it winter yet? Videos of these Freebords piqued my attention years ago. They make riding downhill look more like snowboarding and less like skateboarding...at least as close as you can get while on pavement. The physics behind the truck system are hard to wrap your head around at first, but overall the learning curve is fast.

To be clear, Freebords aren't normal longboard skateboards. If you're looking for a cruiser skateboard to get around town this probably isn't it. These are built for downhill. If you're a skateboarder or a snowboarder, your muscle memory will give you a huge advantage in conquering the learning curve. So, if your downhill skateboarding is weak when it comes to bombing hills, a Freebord may be just what you're looking for.

Pointing downhill on other skateboards can quickly go from smooth carving, to desperate shaky turns. Speed control is imperative. In my few hours of experience here, sloughing speed comes much more naturally on a Freebord. I have longboarded downhill some in the past, but rarely with successful and intentional wheel slides. Typically wheel slide occurs with some combination of faster speeds and more G Force on carving turns, to the point where the wheels loose traction with the ground surface and slide. Not a beginner move for most people. The control and style of sliding purposely is a result of courage, skill and usually some skin lost to the road. 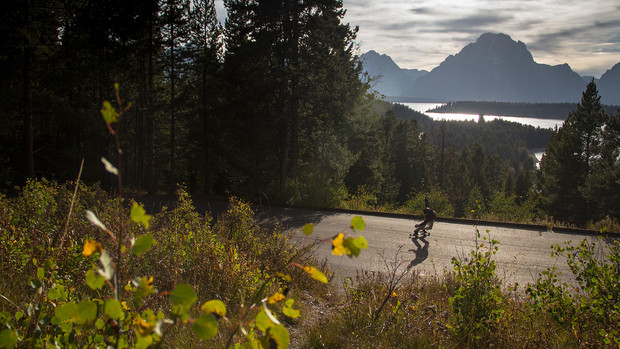 - Shred down steeper terrain! Control your speed with confidence.

- Learning to slide is part of the beginners experience. It doesn't take years of practice

- Riding switch is a reality. Overall similar to snowboarding in many ways

- It's a niche board especially if you live in Iowa. 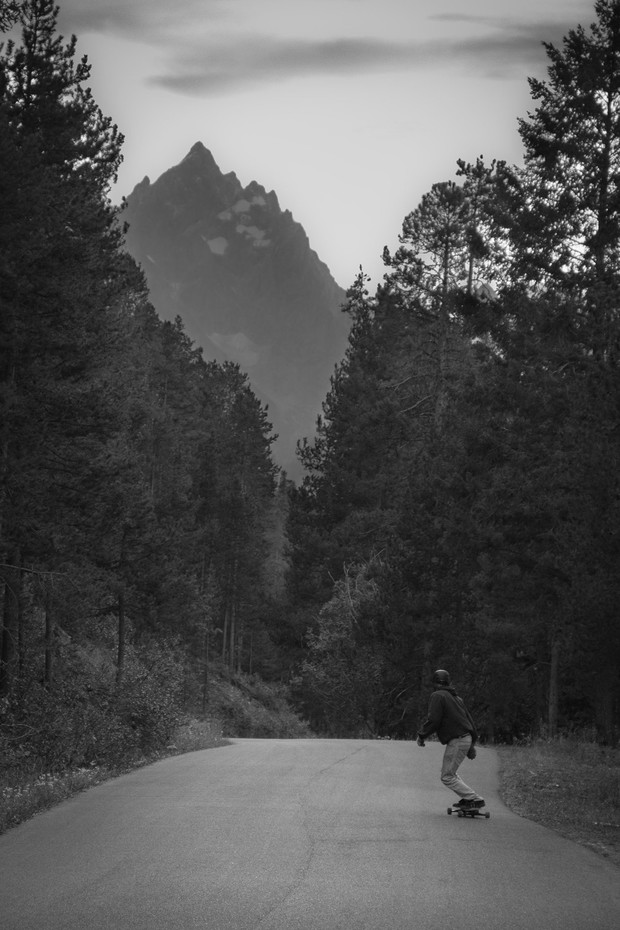 As a beginner, the Freebord opens the possibility for slides at much slower speeds compared to that of most longboard skateboards. These boards feel awkward when you step on because of the high center, but it' becomes a relatively intuitive motion when you start approaching it like snowboarding. I felt the first heelside "slide" within 20 minutes of giving it a try. 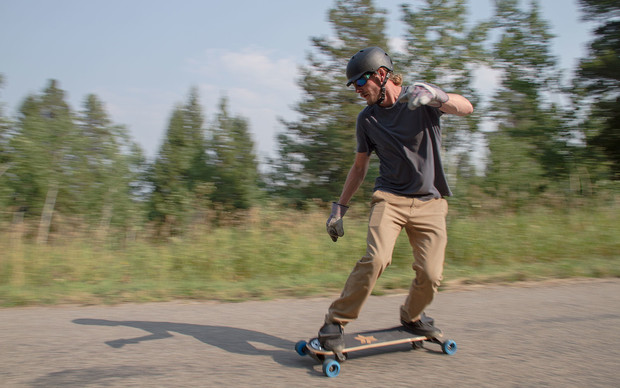 Wear leather gloves and a helmet at minimum for protection.

Speed is your paradoxical friend

Setup:  Small adjustments go a long way and every rider is different. Especially true with the center wheel height. Variables like board size, bearings or kingpin tension can have influence on the carving characteristics, but not as significantly as the center wheel height. For beginners, the lower ride is more controllable and most similar to a snowboard's flat base. At higher speeds the rocker comes into play for handling more speed without catching an edge. Here's what Freebord has to say about the center wheel height:

Center Wheel Height: Your Freebord comes from the factory with the center wheel furthest from the board. The center wheels should be adjusted so that there’s a minimum finger widths clearance between the downhill edge wheels and the ground. The more extended (away from the deck) the center wheel, the less likely the rider is to catch a downhill edge. But they will have to deal with more rocker in this position and therefore have harder transitions between toe and heel side turns.As your outer wheels wear down, adjust the center wheels closer to the deck to maintain a consistent amount of rocker. Rocker is the distance between your edge wheels and the pavement. The more rocker the easier it is to slide. Always set your two center wheels to the same height. If the rocker is too much for you starting out, experiment by raising your center wheel one notch (towards the deck). This will give you less rocker but make it easier to catch an edge. When you improve, you will most likely want as much rocker as possible.

Learn: Freebord has a series of Learn to Ride videos on their website. The "learn to stop" video is an especially helpful drill to get familiar with slides and board control when you're first starting. Find an empty and smooth road with some friendly downslope.

Caution: Riding a Freebord looks easier than it is. As a beginner, you have to commit to the idea that you’re snowboarding on pavement (not skateboarding). Just like learning to snowboard, it may take several days or weeks to get the hang of it even if you rip on snow. Slams come free with every board!

Thanks to the  Freebord crew for sending the boards and to Ryan Dee for the photos and tips! Great review on the freebord. I just have a quick question: I’m about to try this new board sport, and I have been a skateboarder/longboarder/surfer for some years now. I’ve only tried snowboard 4 times in my life, really sporadic and many years ago (I live in a sunny place..). How long do you think until I can get the hang of freebord? you know, to feel comfortable and be fluid, and not to ride like a tight robot lol. I’m assuming my previous board experience should be a plus?...Thanks! Previous experience standing sideways will definitely help. I think a few weeks is a fair estimate to get the hang of this, but all depends on how much time you dedicate to it.

If you’re building a setup VS buying a complete, maybe look at the Greengo wheel set. Also I found smaller center wheels than the 72mm offered, which makes the board feel more stable as a beginner.

Two weekends ago TGR athletes both past and present gathered at Squaw Valley for the last shoot of TGR's winter production season. A combination of both hard charging on the slopes and the bars led to a great weekend. We highlighted some moments above, and talked to TGR co-founder Todd Jones about the special couple of days.  "The idea for the segment was to gather as many TGR athletes as we could, both old and new, to shoot a party shred from the top of the Palisades. Of course the crew gets

Sunshine. Slush. Rain. Snow. Fog. And of course lots of gnar. The 2016 Dick's Ditch Banked Slalom didn't disappoint! Held along Amphitheater, within Dick's Ditch, the course was made up of small whoops, medium sized jumps, and a lot of banked corners which left competitors gasping for air and their legs on fire after crossing the finish. Although the weather didn't cooperate for the entire two day event, the competitors didn't seem to be affected by it, most of them maching and sending the