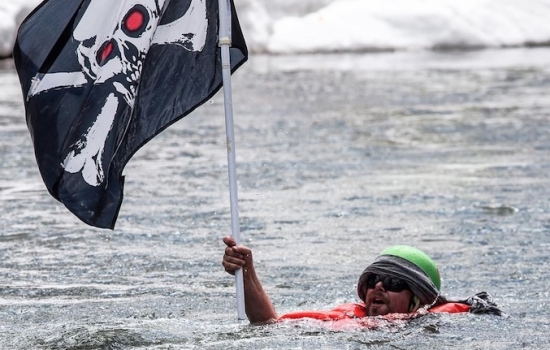 TGR co-founder Todd Jones doesn't quite make it across the pond during Squaw Valley's Cushing Crossing. The stoke, however, is still at an all time high! Jeff Crico photo. TGR cinematographer Austin Hopkins captures Aaron McGovern dropping in on a heady straightline in the Palisades at Squaw Valley this past weekend. Jeff Crico photo.

Two weekends ago TGR athletes both past and present gathered at Squaw Valley for the last shoot of TGR's winter production season. A combination of both hard charging on the slopes and the bars led to a great weekend. We highlighted some moments above, and talked to TGR co-founder Todd Jones about the special couple of days.

"The idea for the segment was to gather as many TGR athletes as we could, both old and new, to shoot a party shred from the top of the Palisades. Of course the crew gets up there on top of the Chimney, in the gnar zone, and all of sudden they just start pinging all these super rowdy lines.

Dash Longe, who was MVP of the weekend, and a big part of getting everyone together, he was the first guy to throttle a super rowdy line. "I was like, 'Okay, this is how this is going to go down.' McGovern sent it, then Mac and Johnny did a double. Classic TGR athlete style, it wasn’t going to go down simple. It turned into this legendary session, which exceeded my expectations.

When we did the final drop shot I don’t think anything like that had gone down at the Palisades before. The celebratory vibe was epic and well captured, it is going to be a really good way to cap off the TGR's 21st film."

Thank you for sharing with us, its really nice post,  you can also visit below link and take benefits of our services Best Seo company in Sacramento , help for unable to install wn300 extender .

I appreciate everything you have added to my knowledge base.Admiring the time and effort you put into your blog and detailed information you offer Netgear wifi extender support Tollfree Number , website designing company.

I really loved reading your blog. I also found your posts very interesting. In fact after reading, I had to go show it to my friend and he ejoyed it as well!
- slope game

Might want to thank you for the endeavors you have made in composing this article. I am trusting a similar best work from you later on too. Actually, your exploratory writing capacities have motivated me to begin my own Blog Engine blog now. Extremely the blogging is spreading its wings quickly. Your review is a fine case of it.

Condos For Sale in Belize

Belize is blessed with natural richness of swirling palms, aromatic orchids and white sand beaches that are reminiscent of dreamy views at every blink.

I would like to thank you for the efforts you have made in writing this article. I am hoping the same best work from you in the future as well. Keep sharing!  Needing to inspect your next post.
Chennai Escorts Service

Wow! such wonderful information…. thanks a lot to share!
Visit games.lol for Arcade Games

Great post, you have pointed out some fantastic points. Thanks for sharing.
Visit games.lol for Puzzle Games

Yo that flag is ACE. I just checked out the new Grateful Dead collaboration too, and it’s awesome. Great work guys. Thanks, Pressure Cleaning panama city fl

Flame-throwing guitars. Fireball nunchucks. Impromptu flip cup competition at the base of the bowl. Spandex- A lot of spandex. This year's closing day party at Highlands was one for the books, to say the least.

Needless to say, there was absolutely no shortage of snow this year at SASS Japan. After three sold out sessions, smiles galore, and hundreds (if not thousands) of faceshots had, we're counting down the days until next year. Sign up for the pre-registration Short List to guarantee your spot at SASS Japan 2017 HERE.