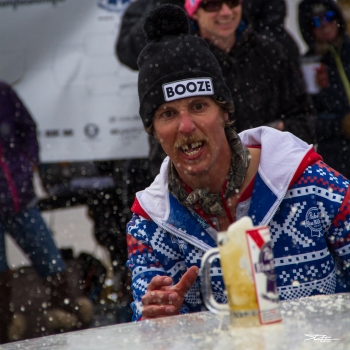 What do you get when you mix gallons of PBR, pints, a table, and a ski town? The Gelande Quaffing Championships, that's what.

Held at the base of JHMR, the annual drinking game sets two colorful, and rather beer-ful, teams of four against each other in a true competition of skill, speed, dexterity, and beer guzzling prowess. Frosty pints of beer are sent careening down a table only to be caught with finesse (or not) by a fellow athlete. The beer is then quickly deposited into the gut of the competitor and the pitch-catch-drink process is repeated with each teammate cycling around the table. After each one minute round the team with the most points, which are earned by a glass or handle catch, wins and moves on to the next round. With 12+ teams in the running, the competition is fierce, and definitely drunk. Things got hectic pretty quick.

Each round started with a "3-2-1 QUAFF!" which was then followed by 60, high energy, seconds of beer pounding. As countless pints hurdled down the tables, the competition stage was flooded with bumping music, laughter and cheers from the crowd, and plenty of spilt booze. As a onlooker to the Quaffing madness, one must know that anywhere within the competition venue is a splash zone. So dress accordingly and maybe think twice about bringing that DSLR for shooting a photo gallery.

As the game continued and teams are knocked out, the rounds take on another level of intensity. If you and your team are lucky enough to make it to the final rounds, you are greeted with the fan-favorite freestyle round. Where ANYTHING goes. In previous years the freestyle round was accompanied by the skunky perfume of beer-bong smoke, the demise of one unlucky goldfish, and even a flaming regulation competition table. The freestyle round doesn't disappoint.

This year the Moose team brought their A-game to the freestyle round. Before the round began, the team adorned their table with four PBR bikini clad women, complete with xtra-tuff boots for that added sex appeal, and warmth. As the underdressed table top ladies danced and doused the crowd with refreshment, the team lobbed beers between their feet. The minute round passed quickly with teams and fans alike wearing plenty of PBR and full grins.

By the final rounds competitors were soaked, inside and out, with beer.  In the ultimate champion crowning  60-sec round, the two surviving teams were cheered on by a crowd of a few hundred stoked fans. Many beers went flying down tables and into the belly's of the athletes but after the initial round the teams found themselves in a draw and a hush fell over the venue.

A Quaff Off was called and cheers erupted from the crowd.

The Quaff Off round consists of a 60-sec round where only handle catches are counted. The air around the competitors in the final Quaff Off was filled with focus and determination. It had all come down to this.

Beers were valiantly sent hurtling down the tables were they were promptly caught and chugged. One after another the athletes sprinted around the table repeating this cycle of ale acrobatics.

The tables were clouded with flying glasses and froth. The air was filled energy, and PBR.

The chaos subsided and the team members took a breath and reclaimed what ever balance had not been inhibited by copious quaffing. They gathered atop their respected tables sharing their merriment with the crowd as everyone awaited the results.

"The 2016 Gelande Quaff Champions are team Hostel A!"

Team Hostel A burst with joyousness, and made it rain upon the crowd with pitchers of cold brewed Milwaukee hops. They hoisted the iconic Gelande Quaff trophy over their heads and drank more beer from the grand vessel.

The 2016 Gelande Quaff Championships lived up to the hype. The fans and competitors stumbled home with lasting memories of flying pints, half clothed women, awesome costumes, and competitive binge drinking. For one team, they left with the illusive title and trophy, which until next year, will be placed with pride high upon the mantle of whosever house they happen to be couch surfing.

Two weekends ago TGR athletes both past and present gathered at Squaw Valley for the last shoot of TGR's winter production season. A combination of both hard charging on the slopes and the bars led to a great weekend. We highlighted some moments above, and talked to TGR co-founder Todd Jones about the special couple of days.  "The idea for the segment was to gather as many TGR athletes as we could, both old and new, to shoot a party shred from the top of the Palisades. Of course the crew gets

Flame-throwing guitars. Fireball nunchucks. Impromptu flip cup competition at the base of the bowl. Spandex- A lot of spandex. This year's closing day party at Highlands was one for the books, to say the least.

Needless to say, there was absolutely no shortage of snow this year at SASS Japan. After three sold out sessions, smiles galore, and hundreds (if not thousands) of faceshots had, we're counting down the days until next year. Sign up for the pre-registration Short List to guarantee your spot at SASS Japan 2017 HERE.