Coast Film Festival's filmmaker showcase featuring TGR's two newest films, Winterland & Roadless. Come for a night of amazing snow films in Laguna Beach and get an insider view of the films with TGR's co-founders.  If you love skiing & snowboarding it is a night you don't want to miss.

Winterland is a celebration of ski and snowboard culture. Today's mountain athletes can only stand as tall as those who came before, the pirates of the past who followed their own path and passion. This story of adventure is far from over, as a new crop of modern-day pioneers are eager to etch their names in the annals of history. The technology and style might evolve, but the rush, excitement, and pure fun remain eternal, bonding past, present, and future riders. The film will follow these individuals as they leave their own mark on these fabled locations.

Roadless: In the winter of 2019, Bryan Iguchi teamed up with fellow snowboarding legends Jeremy Jones and Travis Rice to explore an untamed part of Wyoming on a 10-day human powered expedition.  Follow along as three of the biggest names in the sport tackle some of the most remote terrain in the lower 48.

Also check out the Accomplice Tour! 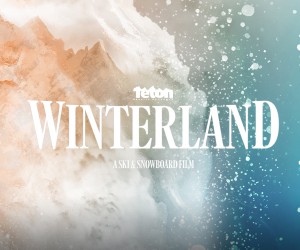