Japan is on every pro snowboarder’s hit list. Because of its location on the planet, it gets more snow than anywhere else on the Earth. Japow is a real thing. From December through March, the cold Siberian airstream travels south and east across the warm waters of the Sea of Japan. This cross up of cold air and warm waters form clouds full of moisture that lead to heavy snowfall over the mountains of Japan. Heavy snowfall and more ski resorts per capita than anywhere else in the world has made Japan a globally sought-after place for anyone who seeks out powder. That includes me.

This particular trip to Japan had some funny twists and turns as do most overseas trips. We arrived in the well-known area of Hakuba with our film crew. Not traveling light by any means, seven of our nine person crew got cozy in a cabin in the main part of town. This crew included myself, Hana, our two cinematographers Gabe and Sean, Justin who kept everything/everyone together and also filmed, and two photographers Leslie and Colin. Beyond the seven in the cabin we had Shin Biyajima as our local guide and shredder. He not only took us to the best spots to find fresh snow, but also the best local ramen spots, hide-away temples and secret onsens. We also planned to meet up with Travis, who was in Hakuba for the Freeride World Tour, and who wanted to stay in the area and shred with us after the contest. 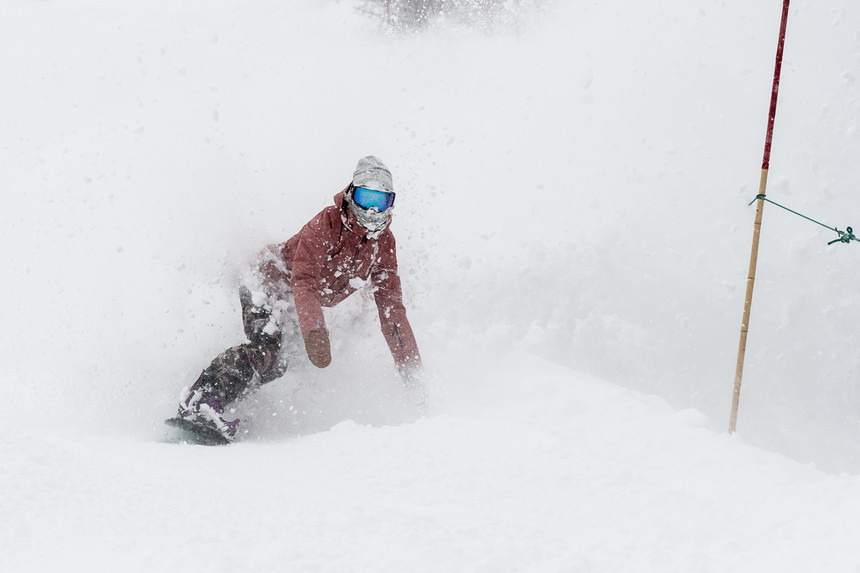 After spending some time in Hakuba, Travis suggested that we venture further North, to get off the beaten path a little more. Aim to go ride some more unknown and undocumented resorts and just explore. Our crew was stoked on the idea, so we packed up the vans and set off into a blizzard.

Traveling with a crew of nine is difficult. Traveling without a solid plan or destination with a crew of nine, plus all the camera and computer equipment it takes to film, is well, you might just call us crazy! Just the sure amount of gear that has to be moved every time you change locations is laughable. It may not have been the path of least resistance but it sure did lead to a lot of fun. 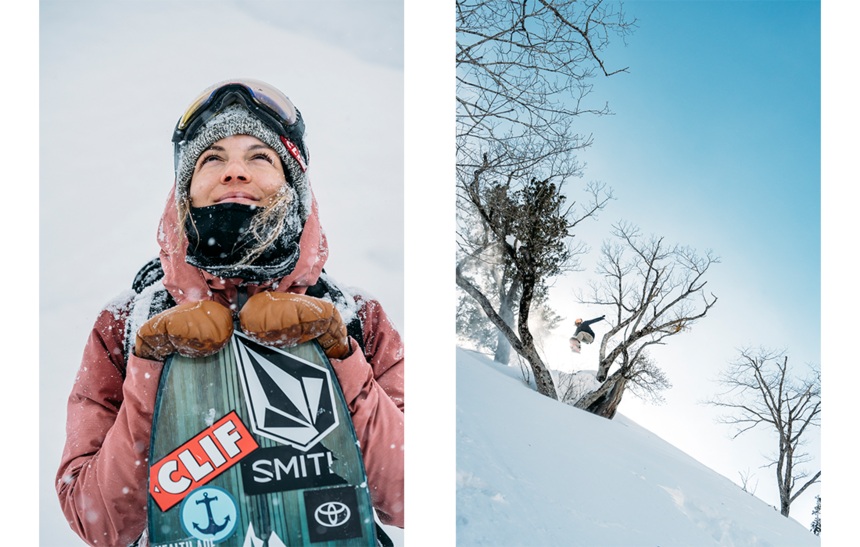 As we attempted to make plans on the go, at one point we ended up booking rooms at this resort close to the mountain range we wanted to explore. It was at the base of a ski area no one had ever heard of and had breakfast and dinner included. Score. When we pulled up to this little hotel we thought we were checking into, it was a giant high-rise building. Didn’t see that one coming!

A bellman approached with concerned faces and attempted to help us with the tie downs that held about 6 board bags on top of the roof. We finally got all our bags into the lobby, not without taking over much of the doorway and amidst some wide-eyed looks from incoming hotel guests. I can only imagine they were all thinking one thing, silly Americans. We weren’t really running a discrete program so to say. 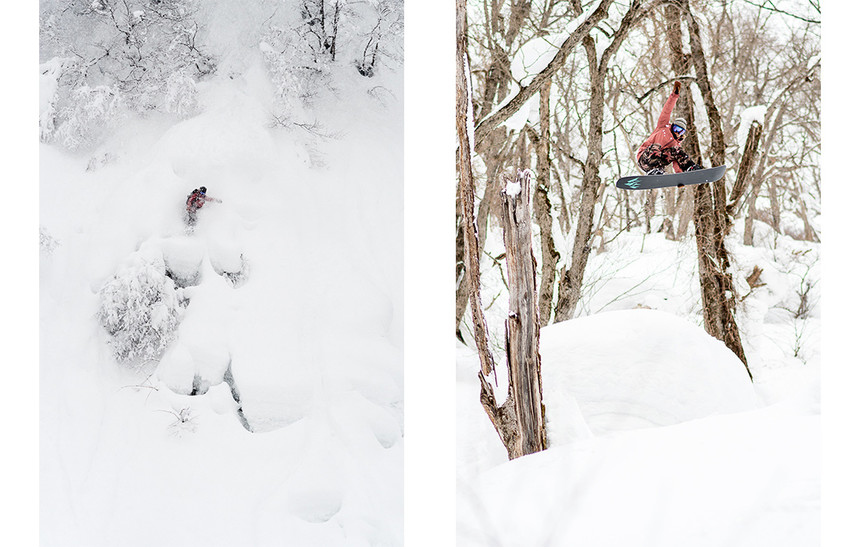 As we checked in, we continued to see all these signs around the lobby, a red circle with a slash covering a snowboard and boots. A sign we all just assumed meant no gear in the lobby. Going about our business, we finished the process and lugged 35+ pieces of luggage up to the rooms and headed down for dinner. Little did we realize that we were basically staying in a Club Med. All you can eat buffet, karaoke rooms, game rooms, entertainment for all ages, that just happened to be at the base of a ski resort. Again, didn’t expect that! Here we thought we were going to some little Japanese village off the beaten path, to a ski resort that no one had ever discovered, silly Americans. Although the real surprise was still yet to come, this made us all laugh and just embrace the weirdness of the situation.

The next morning as we walked through the lobby with all our snowboard gear to head off for the day a manager chased us yelling something in Japanese. Not being able to translate we just assumed we were not supposed to carry gear through the lobby, apologized and continued on. 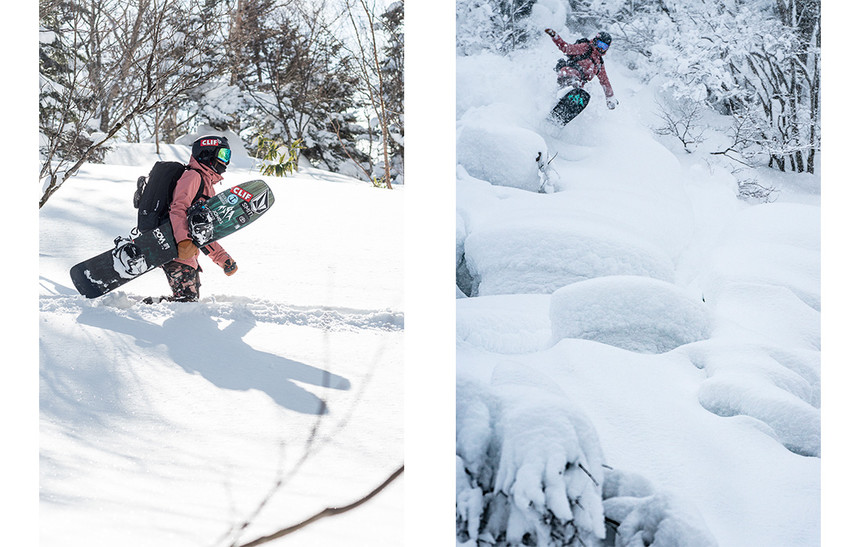 The resort that we had ventured north intending to ride did not disappoint. Fun steep terrain and deep snow. With virtually no one around we just lapped this one zone run after run choosing the next lane over and over and over until it felt like the entire face was covered in only our tracks. We were finding little poppers, mini chutes, and wide-open lanes to open up turns in. Really all we could ask for was a little break in the storm so that the cameras stopped freezing and we might be able to shoot something. But hey, you can’t be mad at soul shredding untracked pow.

With big smiles and sighs of relief that we didn’t just up and leave Hakuba for no reason we returned to our hotel. Upon return a nice English-speaking manager took Gabe our filmer aside. We all waited silently to the side, like kids who just got in trouble and were awaiting their punishment. Gabe comes back to us trying not to burst into laughter in front of the nice lady who so kindly tried to break the news to him. Turns out those signs, the ones with the X over the snowboard. They were literally just for snowboarders. We were staying at a ski only hotel, on a ski only resort. Our snowboards were banned. Well didn’t see that one coming! 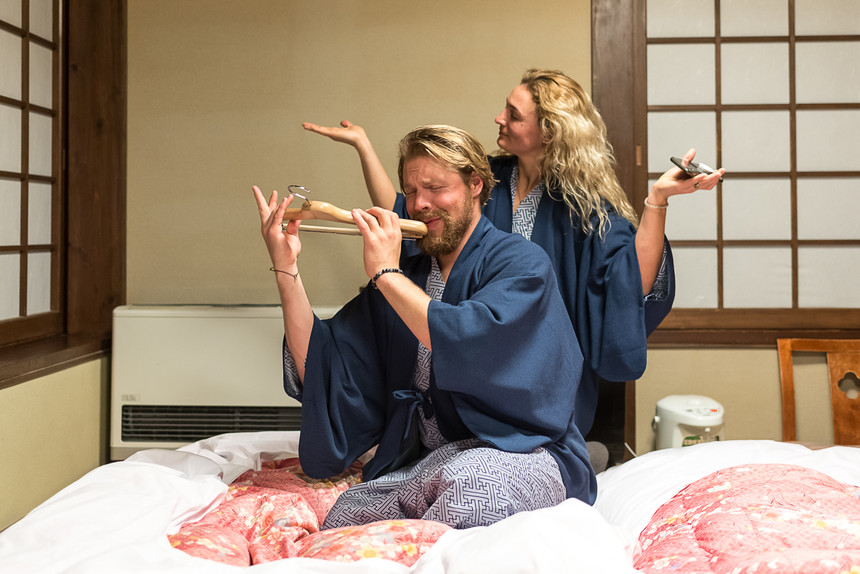 A collective belly laugh completed the scene. No wonder we were getting such crazy looks of concern and confusion since the moment we arrived. Gabe promised the lady we would be discreet with our gear so as to not “offend” the other guests and that we wouldn’t ride the resort (although splitboarding is technically not, not skiing). I honestly couldn’t wrap my head around what had happened, but it didn’t stop us from charging the buffets and karaoke rooms. The remainder of the stay we continued to try to hide our snowboards, got plenty more X’s from various figures of authority, and somehow made it through until the end, group intact, no one in any real trouble.

Long story long, that spur of the moment, chase adventure style of travel gave us some trouble. And we, a group of seasoned travelers definitely fumbled. But those bloopers made this one of the most memorable trips I have ever been on. We scored on snow, ramen, belly laughs, gas station treats, and eventually were able to pull out the cameras to capture the mayhem. I have come to learn that most times on trips the mistakes and dead ends lead to the best times. And don’t worry, of course we got some runs in on the no snowboarding resort...I mean we had to!