I’ve been able to see the col for a while, but it’s taken painfully longer to reach than anticipated. It seems like I’ve been three minutes away for half an hour. Finally, with one last kick-turn I take the last few steps and make the transition from ascending to descending.

It takes a second for camp to come into view, and for a fleeting moment I wonder if we’re in the wrong drainage, a catastrophic yet understandable error given the intricacies of the mountains of the Coast Range. At the base of a gentle slope, surrounded on one side by crevasses, is something that looks closer to a scene out of Alive than a proper winter camp. While a few tents have been assembled, the area is generally comprised of expedition detritus: duffle bags of every color and size, propane tanks and miscellaneous ski gear litter the area. As we make the short descent to camp I can’t help but thinking, it’s been a long day but it’s far from over.

The morning started with the requisite last minute shopping, followed by the logistics of shuttling gear and some people into the mountains via heli, while the rest of the crew weaved twenty miles into the BC wilderness on snowmobiles before touring the final 1,200’ to the rendezvous point and camp. The brainchild of Ian McIntosh, the location was chosen based off its close proximity to 1,500’ northeast and northwest faces, in addition to bigger peaks, such as Mount Sampson, which we rode by on the way in. With steadfast enthusiasm and confidence that only Ian possesses, we made the last-minute decision to change locations from Alaska due to lean snowfall in the last frontier. 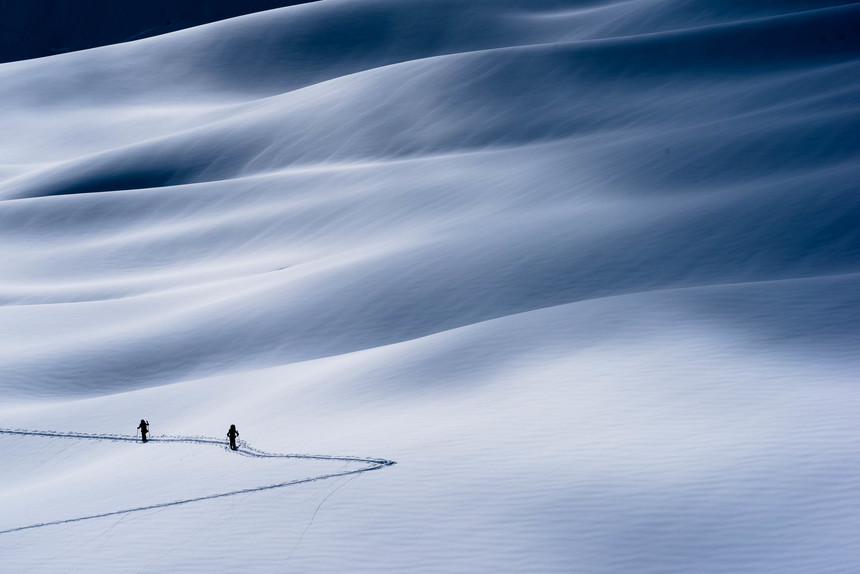 Now, standing in camp, I can see Ian’s vision come to life. The Google Earth images that I’d painted white with my skier’s mind’s eye are even more impressive than I could have imagined. A mix of big open faces and technical spine lines surround us, mostly protected by massive cornices with three-story curls that seem to be defying gravity, resembling exaggerated illustrations from a Dr. Seuss book. As we build camp, we find ourselves constantly distracted from the task at hand by the landscape that surrounds us. It’s all we can do to get the basic camp necessities—a cook tent, water collection area, toilet, personal tents—established as darkness and its accompanying cold starts to engulfs us.

Sitting in the cook tent, enjoying our first meal in the field, energy is high despite the demanding day. Dane Tudor and I venture outside for one last peek at the lines in the fading alpenglow. Tudor, a Canadian that’s mastered the fine art of knowing when to charge and when to stand down, has recently become more focused on foot-power missions, despite his roots in the backcountry booter scene. Zahan “Z” Billimoria joins us shortly after. A respected guide and all-around mountain ninja, he’s a welcome addition to the crew and will take lead on snow safety, letting us focus on the skiing.

Starring up at the terrain we discuss different lines, a collective brainstorm of what’s possible in our proverbial backyard. There’s no claiming of lines or preference of different features, just friendly banter fueled by the seemingly endless possibilities of what could be done with just a few days of good weather in the next couple of weeks. 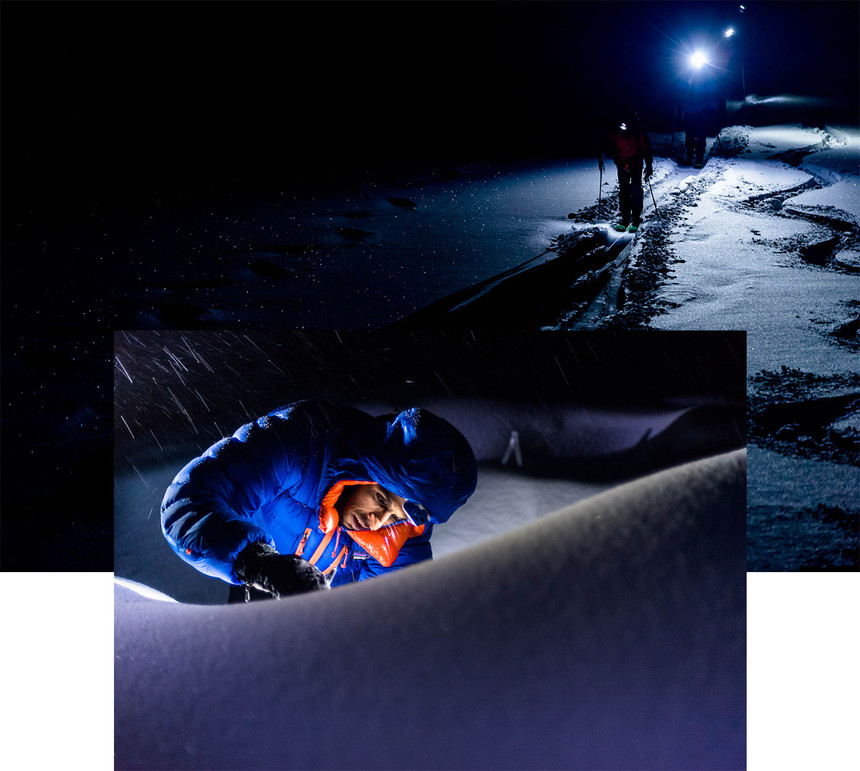 It’s day 12 and we’ve hardly skied a thing. Uncooperative weather is an understatement—we’ve sat in the white cook tent which resembles the inside of a ping-pong ball for large portions of most days only to occasionally wander outside into cloud cover which feels like the inside of a, well, much larger ping-pong ball. Sure, we’ve had moments and snuck in a few runs during some brief weather windows. We’ve cut through cornices on belay and gotten to stare down beautiful lines, only to retreat into the fog. We’ve even stood on a peak, slapped high-fives and ridden some mini-golf lines. But, largely, our desire for skiing heart-racing lines has gone unsatiated.

While the group is ever-positive and our Risk and Farkle (dice) skills have improved significantly, the brass tacks of the situation is starting to ebb our optimism: we’re scheduled to leave in a couple of days and have next to nothing to show for our stint on the glacier. We’ve had two-meters of unconsolidated snow since our first night at camp, so even our brief weather windows have been complicated with constant snowpack re-evaluation. Satellite-text forecasts have become our focus, a world defined by numbers and percentages, and we constantly hope for zeros across the board. Each blue window on the horizon only fades the nearer it gets, but hope springs eternal.

Then, it happens. Zero accumulation. Zero precipitation. Zero cloud cover. It’s the opposite forecast we spend our entire winters hoping for. While the window is still a day out, we immediately start scheming, the most obvious question being if we tick off the smaller lines around camp, or go for one big objective. With another storm on the heels of our window, we make the call to go for a big objective: the intricate, 3,000’ north face of Mount Sampson. Not a classic film line, but an impressive trophy nonetheless. 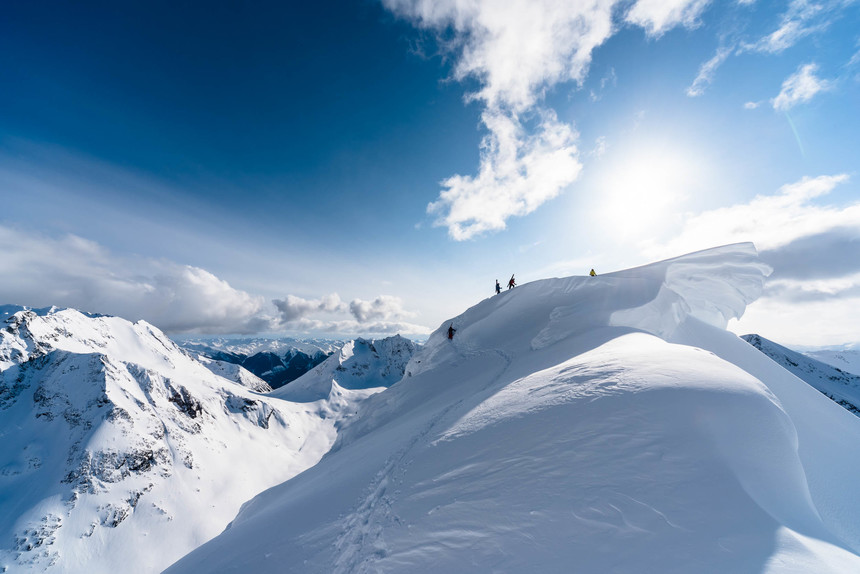 The ridge falls away sharply on either side of us for several thousand feet. Traversing gingerly over rocks that are more covered in facets than snow, we make our way toward the summit of Mount Sampson from the south. Roped up in two parties of two, we protect ourselves from the precipitous ridge by always being on the opposite side of the ridge from our climbing partner, that way any fall would be arrested via the rope, the ridge itself and, ultimately, the other partner. While not terribly technical, the ridge has enough exposure to justify this method which provides extra security while still allowing us to move quickly.

After a short pitch of mixed climbing up a narrow couloir filled with loose choss, we finally top out on the summit proper. While we slap some obligatory high-fives, most of our focus is on transitioning and the business part of the day. The north face of Mount Sampson is a hodgepodge of terrain: a steep ramp starts things off before benching out on top of a massive serac. From there, a peppery couloir skirts around the left side of the serac, emptying out into a hanging snowfield that terminates in a several hundred-foot cliff. A sharp left leads one into the exit couloir, a 1,500’ wide open chute that eventually opens up into a massive apron and the valley below.

A short, but sketchy traverse from the summit puts us high on the ridge of the north face, and for the first time we get a proper look down our line. The ramp is steep but manageable, and the snow sparkles with a crispness that looks closer to December snow versus late April snow. A couple of pokes with our poles confirms the snow quality: the top ramp, at least, is pristine boot-top powder.

Z drops first, followed by Ian, Dane and me. The snow is near perfection, allowing for fast yet perfectly controlled turns. At times I sneak glances down at my tips as they cut through the snow in unison, like boats through a glassy lake. We regroup above the serac, perform some snow stability test and quickly make a plan for the second half of the line which is heating up in the afternoon sun. 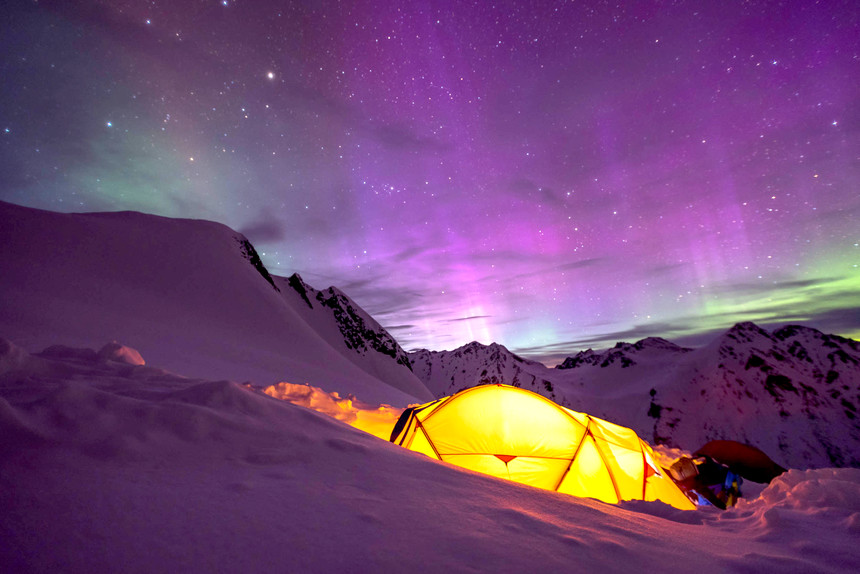 Dane skis first through the technical choke. He quickly drops out of sight and for most of his line we’re left with only the sound of his sluff to clue us in on how it’s going—a dull roar that eventually crescendos into the sound of a freight train. Then, he comes shooting into the apron with hoots and hollers that echo off the narrow valley walls all the way back to us, 1,500’ above. I drop next and immediately see what all the fuss was about. While the snow’s not perfect, the view of the serac flying by on my right, followed by a must make right-footed turn ahead of my sluff before gaining the exit ramp is truly awe-inspiring. I join Dane at the bottom of the apron, followed by McIntosh and Z shortly after, all sharing similar approval in series of shouts and high fives. While it may have been hard to discern exactly what we were saying, the message was surely clear to anyone within ear shot.

Touring back to camp, over the col that night, there’s a collective sense of stoke and accomplishment. While the weather presented its challenges, there’s a sense of perseverance amongst the group that we were able to achieve the proudest objective we could, given the conditions. We won’t look back on this trip and think about Ian’s line, or Dane’s line or Griffin’s line, but Our line—the culmination of a group effort that’s success was directly tied to each member’s contribution. And, with a trip that took so much group energy to stay optimistic and motivated in spite of the circumstances, I wouldn’t have it any other way.