This Was the Best POW Day in Italy Last Winter

The base station to the Skyway Monte Bianco Cable Car is eerily quiet. There’s no lineup of frothing skiers, no hysteria in the parking lot signifying a powder day and even the small café adjacent to the ticket office is only partially occupied. Save for a couple of other pairs of skis in the ski rack, there’s nothing to signify that the place is even open today. For the moment, we wonder if we’ve made a terrible mistake on what has been hyped as one of the best days in the Mont Blanc area this year.

Slowly, however, the place starts to stir. Some workers tell us that there will be a slight delay and only the lower station, Pavillon, will open today. At most areas only half the mountain opening would be a disappointment, but when the lift accesses over 7,000’ of terrain, a partial-closure still leaves a decent bit of real estate to work with. It should be noted that the Skyway Monte Bianco, or simply the Helbronner, is by no means a ski resort—it’s a sight-seeing lift that just so happens to access the stunning terrain surrounding the Italian side of Mont Blanc. Likewise, there’s no piste, no patrol and the only warning signs are the ones trying to dissuade adventurers from doing whatever it is they’re about to do. It’s lift-access skiing at its rawest. 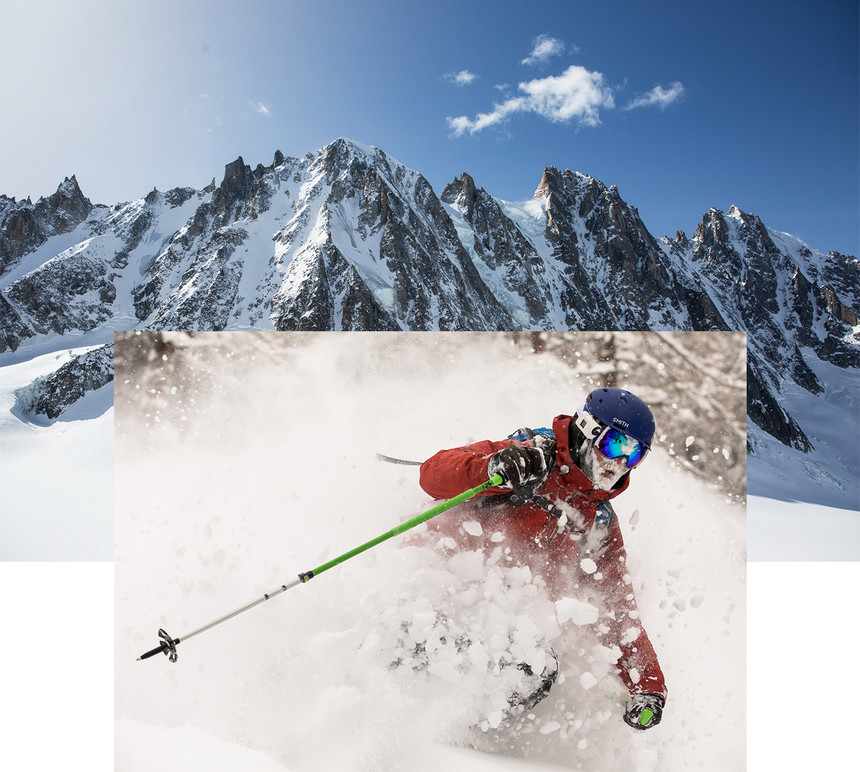 Finally, the cover is removed from the turnstile and we load the circular tram with a handful of other skiers. With a 110 million-euro price tag, the cable car doesn’t disappoint. The cylinder rotates circularly on our climb to the first station, allowing us to take in 360-degrees of that has been completely transformed by the roughly six feet of snow that’s fallen. The terrain that was grass and rocks days before is now so thickly coated in snow it makes the last couple weeks of springtime temperatures feel like a distant memory. We discuss the hazards—which range from sloughs to class 4 avalanches running through the exits of otherwise moderate terrain—and decide to stick to the north-facing trees where we’d skied a couple of days before.

There’s no powder day frenzy once we reach the top. I throw out a few “après ,” one of the few French phrases I know, even though we are in Italy. We civilly proceed, taking turns breaking trail through the waist deep snow to a point that we can put our skis on and work safely down the ridge to the north-facing trees. Even on the ridge, following a dozen tracks, we can tell how deep it is. The one-off turns between traverse tracks completely engulf us, momentarily blinding us before emerging again back onto the track. By the time we reach our zone, we’re brimming with so much stoke that we have to make a conscious effort to slow down and make a plan instead of just dropping in like feral cats. 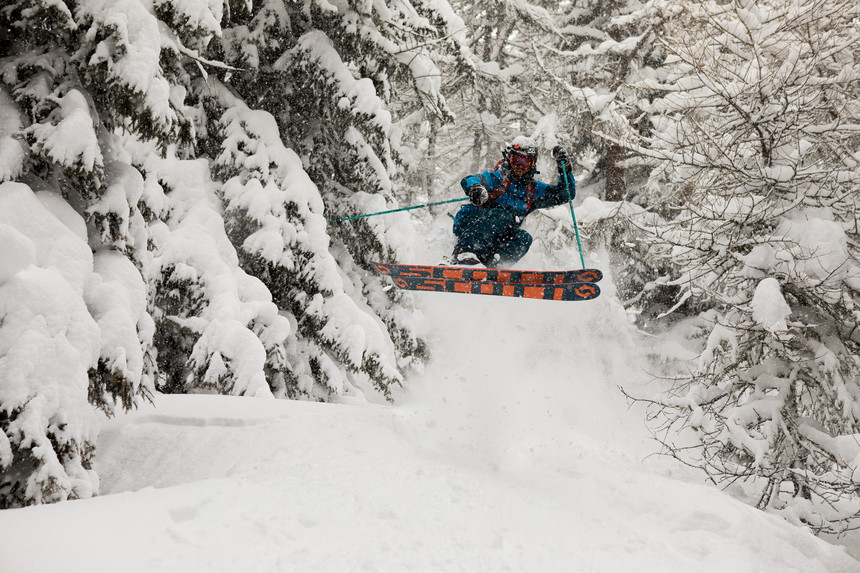 After making a hasty plan to work left-to-right, Ian McIntosh gets ready to drop into a landscape that looks like a grade-schooler got carried away with frosting on a gingerbread house. At over six-feet, Ian usually stands out no matter how deep the snow. Today, however, he completely disappears on his first turn and what follows is better described as tunneling than skiing. He translates his excitement into a series of hoots and hollers, slightly muffled by the snow that’s still in his mouth, and signifies what we already knew: it’s deep. Really, really deep.

Unable to wait any longer, I drop next. What follows is a series of some of the most memorable turns I’ve ever had. The snow is so deep and so light that the face shots aren’t fleeting moments between turns, but continuous to the point that, after five or six turns, one can lose track of where he is on the slope. It’s as though we’re not skiing on top of the snow, but we’re momentarily part of the snowpack. 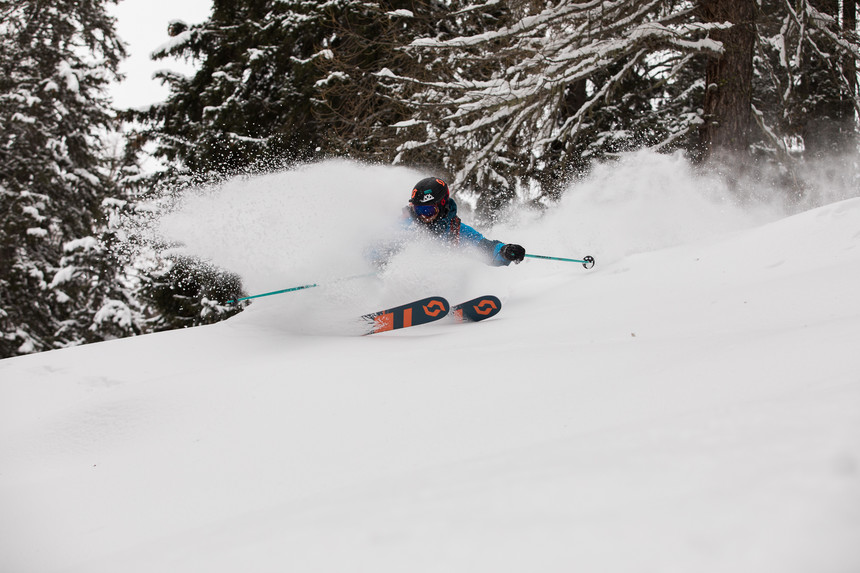 Dane Tudor drops next, and we can barely make out his blue outfit for the majority of his turns. From this angle, he looks like a cartoon gopher pushing up dirt through a field. He pulls up and we collectively look at one another in stunned amazement. In an area that’s struggled with snow all winter, we are literally catching the best powder day of the year, and there’s not a soul around.

We continue working the 3,500’ run skiers left to right, and the snow quality holds all the way to the pastures that were entirely grass just days before. We leapfrog one another down snow-covered roads and eventually through the century-old alleyways of La Palud and back to the base station. Surely we think word must have gotten through the Mont Blanc tunnel and back to Chamonix, yet the parking lot is still only half full. After a quick coffee and snack, we’re back on the cable car, which is somehow less full than our first lap. 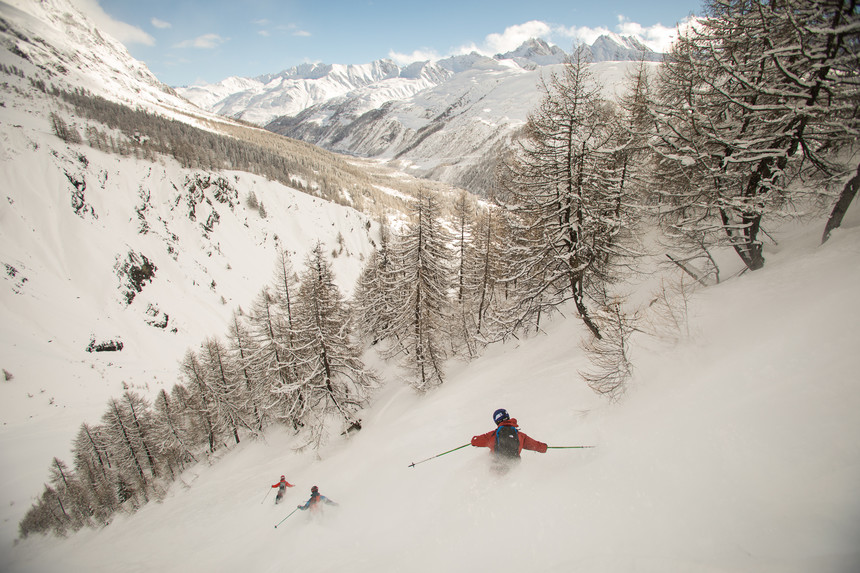 We retrace our tracks, which are partially covered from the continuing storm, and traverse a bit further right. A group of three other skiers had come through behind us, but there’s still plenty of untracked to work with. Confident that there’s no oncoming frenzy, we take our time packing out lips and more precisely choosing our lines. Dane floats a massive cork-seven—a worthy shot on its own—followed by four over the head powder turns, a combination that would impress even the most hardened ski-film critic.

By the time we finally made it to the bottom, light is fading in the valley. Our enthusiasm and satisfaction so high it almost borders on guilt: in an incredibly dry season, we just happened to hit the biggest storm of the year on the third day of our trip. We head back to the café, the de facto breakfast, lunch and now après spot of the Helbronner, and I bump into an Italian friend. He mirrors our what-the-hell-just-happened look and I ask him where everyone was today. He shrugs and replies, “It’s Italy. Nobody skis unless it’s sunny.” Without another we raise our glasses and cheers to that.