How to Manufacture Winter in Minnesota

Urban skiing makes cities wild. With the right amount of nerve and just enough manpower, cold concrete becomes a snowy canvas. And if you think twice about that icy set of stairs, imagine the people whose eyes light up at a few inches of snow on and think—it’s time to go skiing.

The heart of urban skiing and mad science behind filming it has always been figuring out ways to make it happen when the odds are against you. No matter the conditions, skiing in urban environments isn’t what one would necessarily consider a natural marriage. If you think off-piste crashes are bad, just imagine how many assbreaking falls go into a 10-minute street segment. Conditions for street skiing are never perfect, but if you were to look for perfection, urban skiers could bet on Duluth, Minnesota. 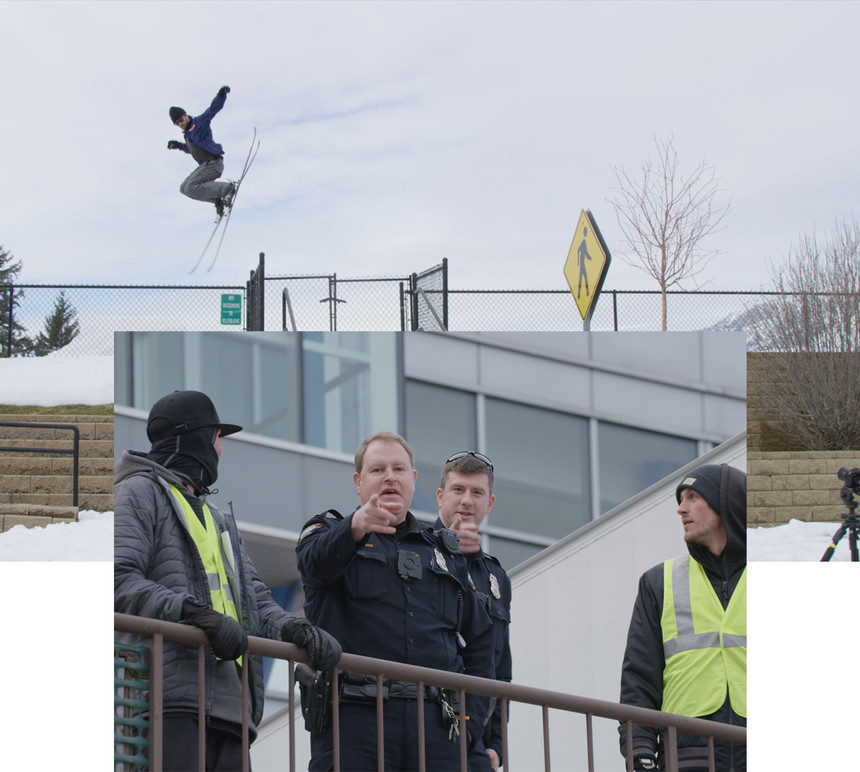 Minnesota has long been considered a mecca for urban skiing in America. Duluth is the colder, grittier little brother to the Twin Cities of Minneapolis and St. Paul 150-miles to its south. The Midwestern city sits right against Lake Superior on a steep hill that climbs upwards from the northwestern lakeshore. In the world of urban skiing, Duluth checks off all the boxes for a reliable location: hilly topography (vert still matters on concrete), lots of old, steel architecture, and most importantly, a chilly Midwestern lake-effect, which promises long, snowy and cold winters. Usually.

When Clayton Vila, Cam Riley and Sean Jordan arrived in Duluth last February, there was barely a two-inch dusting on the streets. Panic set in—the skiers and their 14-person film crew was supposed to be filming there for 10 days. “We immediately starting wracking our brains for other cities we could pivot to, but it wasn’t really feasible,” said Cam. The shoot was more intricate than any other project the East Coast crew of skiers-slash-filmmakers had ever planned before. Not to mention, Duluth wasn’t the only city deprived of traditional snowfalls that year. While alpine skiers were enjoying face shots and waist-deep days in the Sierras, there wasn’t viable snow in any city anywhere in the Lower 48. 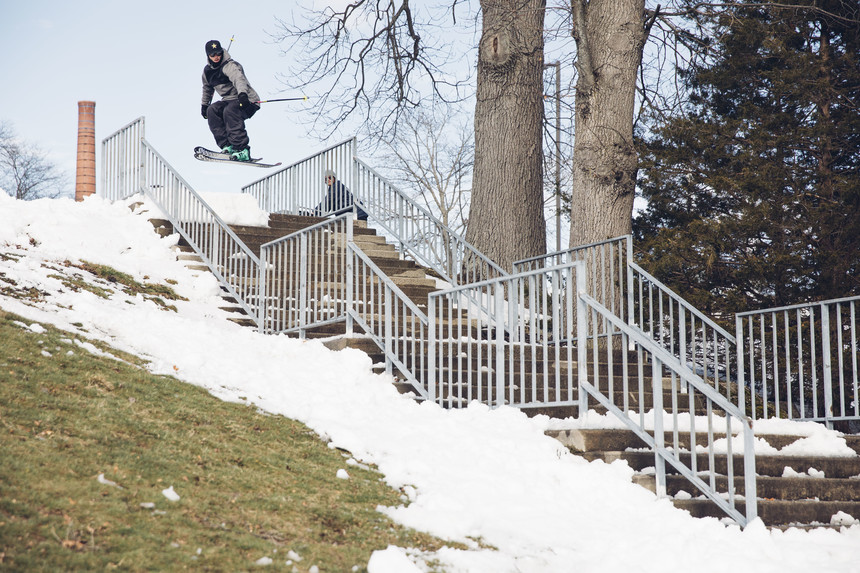 Given the less than ideal conditions, Clayton, Cam and Sean had to go back to their roots: parking lots, hockey rinks—just “shoveling the shit out of it.”

Growing up scattered along the Northeastern Seaboard in Rhode Island, New Hampshire and Vermont, Clayton, Cam and Sean are no strangers to cold concrete and scrappy conditions. The three met in high school and reconvened as East Coast imports in Colorado years later and have spent countless hours together on the road, filming their ski ventures across the US. Working primarily as commercial filmmakers in Los Angeles today, they promise to remember where they came from, this shoot particularly transporting them back into the mentality which has brought them up in street skiing: “You need some grittiness to be shoveling a ton on really cold concrete,” said Cam. “You can’t be spoiled with perfect snow or conditions to be happy to be a street skier.”

Over a few days, the 14-man crew moved 5 dump trucks worth of snow around Duluth. If you don’t know how much snow is in a dump truck, just know it’s a lot. “I wouldn’t even call it snow,” said Cam. “It was some of the nastiest snow I’d ever seen. It wasn’t even white, it was like the texture of sand. Wet, cold sand.” 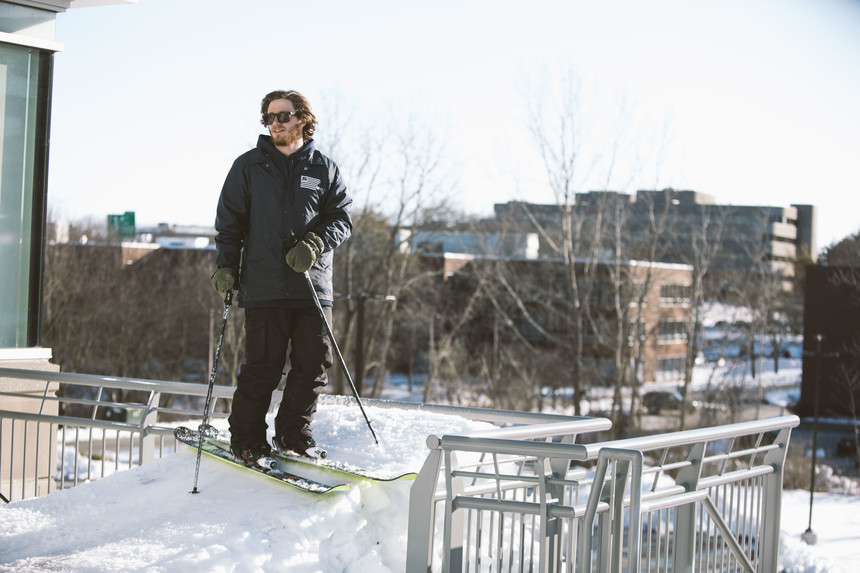 Most of the manpower was dedicated to dressing highly manicured sets, strategically sprinkling the small amounts of available white snow over the brown, sandy slush and shooting super tight, controlled frames. “The whole thing is fake,” said Clayton, the lead director, and mastermind behind the project. “We faked winter.”

If you’re familiar with Duluth, Minnesota, you may notice the majority of this segment is, well, not in Duluth. The team was forced to rely heavily on footage they captured in Spokane, WA, and parts of Massachusetts and Utah, particularly the action shots. If you’ve never been to Duluth or these other locations, of course, you probably wouldn’t notice a thing.

Clayton edited the different locations together seamlessly, manufacturing a false continuity which oddly fit into the narrative theme they were exploring all along—asking viewers to suspend disbelief between what’s “real” and what’s “fake:” The segment shot is half in Duluth, half elsewhere; it’s also half documentary, half fiction. 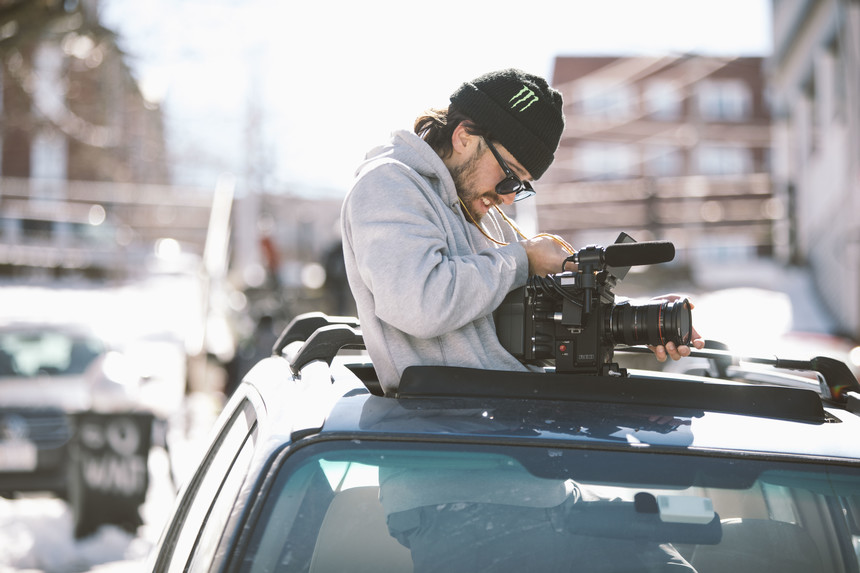 The piece plays upon the contrast between how urban skiers utilize a city and how 99-percent of everyone else uses a city. “When we are doing street skiing in the usual way which we have been doing for years, we’re constantly running into residents and citizens going about their day,” said Clayton. The spectrum of how people react has always been fascinating.

“In a documentary sense, we’re recording them—some people notice, think it’s awesome, some don’t care, a lot call the police.” The most common reaction is not noticing at all. “People are so into their own little world.” Cameos of unsuspecting bystanders have always played a role in their urban segments, so much so that this time they brought in a few actors to play the roles of traditional urbanites. Not every cityslicker in the segment is a hired hand, though. The segment straddles the line between reality and fiction.

If this segment inspires you to notice the world around you a little differently, the production behind it is definitely a reminder of other out of the ordinary elements at play. Each year, it’s harder for Clayton, Cam, and Sean to rely on traditionally dependable locations for urban play. Their experience proves it is a lot harder to chase fleeting winters on the streets than in the mountains. “Street skiers are the first ones who are dying because of this,” said Clayton. “There is still going to be snow in mountains and on glaciers in 50 years, but you can’t even ski in urban environments in America anymore.”

While mountain towns across the United States mostly benefited from weather extremes this past winter (we’re looking at you, Mammoth), let this urban legend remind us of the grittier side of extreme winters.