Skiing During Summer Vacation at 18,000 Feet

One, two, three. Keep counting. Keep moving. Up, Up, Up. Head throbbing. My stomach twists and turns like the clouds below. That’s right, the clouds are below my feet. At over 18,000 feet, it appears that everything is below me, the tents, food, donkeys, the city of La Paz. The only things ahead are Ian McIntosh and a boot pack to the summit.

When I’m not counting my steps or holding in sickness, I wonder. What am I doing in Bolivia? It’s May. Most of my friends and fellow skiers are in Mexico, surfing. Why am I still wearing Gore-Tex and walking long distances in ski boots? When Sam Smoothy asked me if I wanted to “get high” two months ago, I’m not sure this was exactly what I imagined. And why Johnny Collinson and Ian McIntosh agreed last minute to fly south? That’s a question that I’m not sure I’ll ever get the answer. 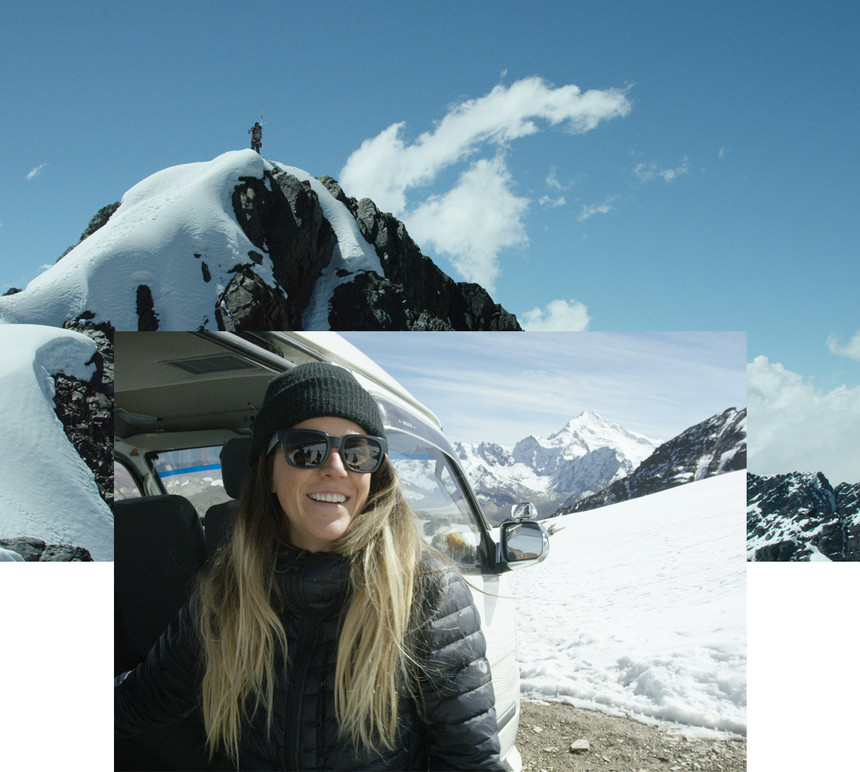 But I take a second to look up from the bootpack-a move that feels harder at my current altitude. This place is amazing and soul-stirring. The mountains rise out of the high desert plains, some piercing the sky at 21,000 feet. And skiing is still my favorite activity no matter what season. The question of why am I here turns back to: will I make it to the top? Will my lungs be able to take in the thinner air? Will my head stop pulsing or my stomach let me eat something, anything? And will we crest the summit before our pre-determined turnaround time? The ski line and descent back to camp are in the periphery of my thoughts, but for now, it’s about the top.

Bolivia isn’t necessarily a top ski destination. The country’s only resort, Cerro Chacaltaya, stopped operations due to the receding glacier in 2009, a haunting reminder given the resort is at an altitude higher than Everest base camp. There are no ski shops in La Paz and no easy shuttles into the mountains. There are gear stores dedicated to mountaineering, but it is a far cry from the infrastructure available in Jackson Hole or Chamonix. 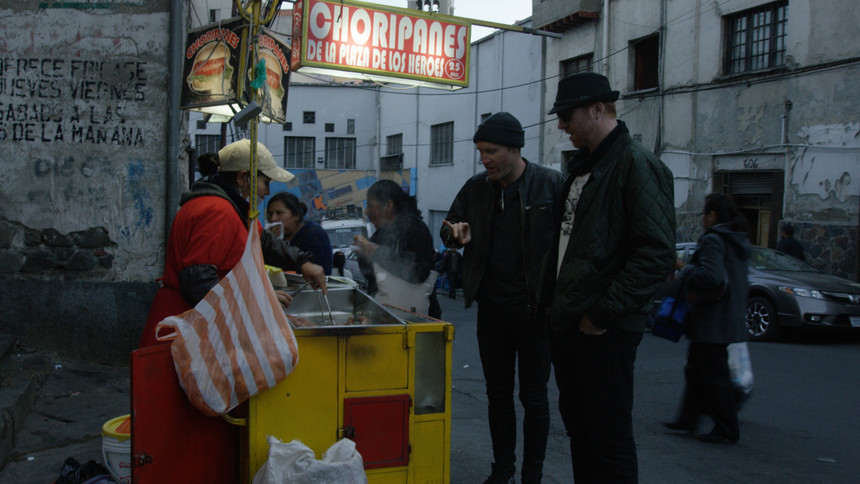 Need a generator for the camera batteries, but don’t speak great Spanish? Be prepared for a full day of charades punctuated with laughter and a lot of head shaking. We hoped at every store we entered that our hand gestures and guttural noises would signal our desire to rent a generator, not a chainsaw.

Need to get dropped off in the mountains and picked up on an unknown day with a questionable weather window? Find a man named Pacifico, who seems to always be there when you need him. And not only will he show up, but he’ll come with snacks, and a brush cleaner for your very muddy ski boots, which he will take off for you like he did for Sam Smoothy so he could continue to puke from the altitude on one of our acclimatizing missions.

Need adventure, some type two fun, a struggle-fest? Well, Bolivia is your place. While it may take some work, you’ll at least be rewarded with mountains that evoke your deepest sense of curiosity. The slopes, which are really just ice plastered to rocks, cry out to be skied despite the horrendous conditions. 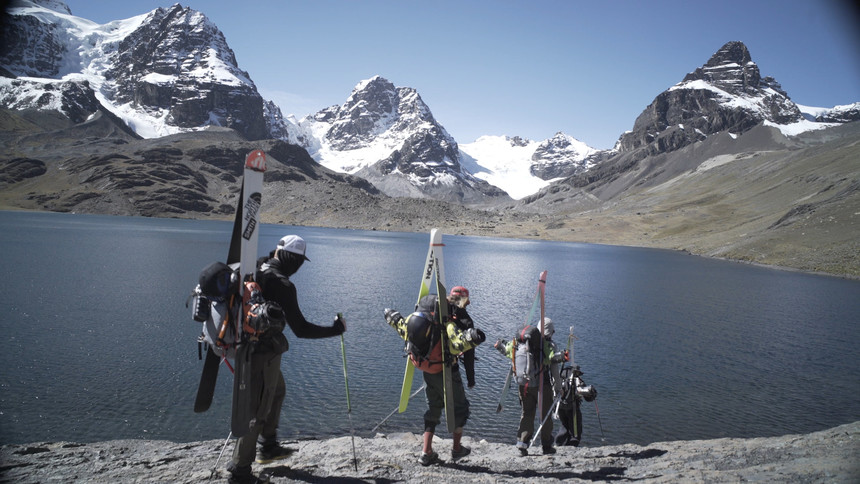 Bolivia is a country of contrasts. The steep, white-capped mountains rise out of a red high desert plain. Their slopes evoke a conflicting sense of excitement and pure fear. The whole trip revolves around these contrasts. We spent many nights sleeping in the city of La Paz. The city and surrounding areas are bustling with a population of 2.3 million people. On the other hand, The Cordillera Real mountain range seems to be populated by more donkeys and llamas than humans. Delicious street food is replaced by dehydrated spaghetti.

Sleeping in the city, the noises never stopped. The city streets are marked with bright colors, the steam of sausages and other mystery meats rising from carts lining every corner. In the mountains, the silence was deafening: Ala Izquerda, at 5,532 meters, its presence looming over us as we attempted to sleep in the thin air. The mountains cast their shadows over our tents, reminding us that we weren’t in Bolivia just to eat choripanes. 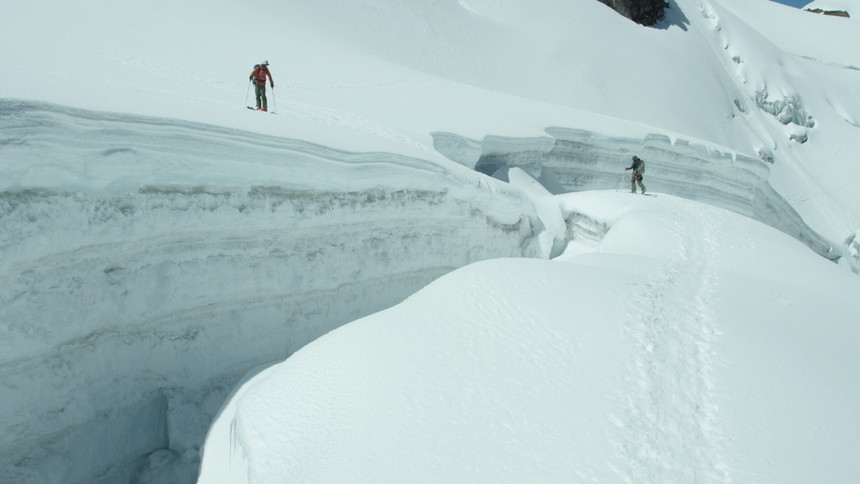 After days spent rotating between the city and the mountains, we were finally on our official mission. After a day of recon, the group split in an attempt to ski the ice-covered peaks around us. Mac and I head to Pequeno Alpamayo (5,370 m, 17,618 ft) and Johnny and Sam rebate their previously failed attempt on Pyramid Blanco (5,230 m, 17,158ft). We weave through glaciated terrain, avoiding the gaping holes shaped like the condor’s wings. We skin, boot pack, and scramble up and down rocky ridges. Time becomes an inconsistent measurement, as one step no longer takes one second, but three. Our alarms were set for our turnaround time, ensuring protection against our own hubris. We were racing the clock but moving like turtles. 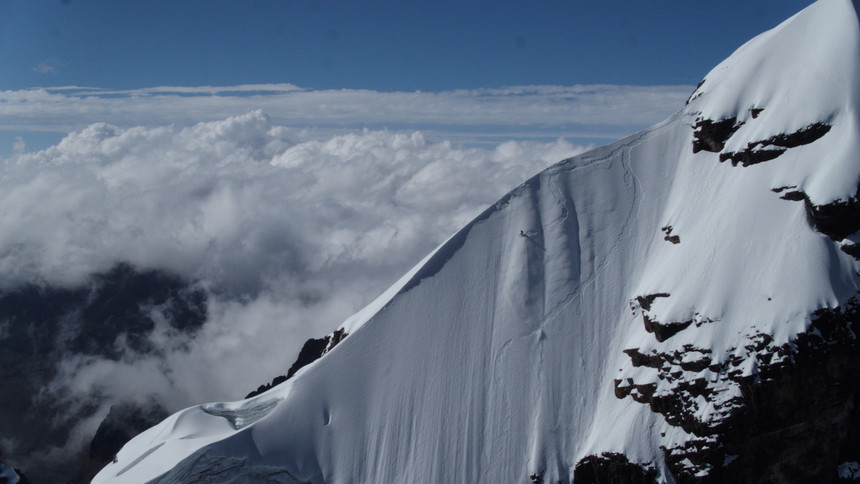 Ten more steps. Mac is at the top, and if I just move ten more steps I’ll join him. The radio crackles with hoots and hollers from Johnny and Sam who can see us from their own mountaintop. The clouds continue to swirl. The jungle is to my left and desert to my right. Each step brings a different feeling: sickness, happiness, headache, awe. As I take my last step, my alarm goes off, waking me from my hazy altitude induced state. I’m at the top, and it’s time to ski. I watch as Ian heads down the steep slope.

I pull my backpack on, thinking of the Bolivian women who are never without a filled blanket wrapped around their neck and back. They are always carrying, but also always smiling. And so I smile and ski down. Pequeno was a slope of ice. It was far from perfect. Far from easy. Far from Coronas and flip-flops on the beach. Definitely a bit scary, but that’s Bolivia. A place for adventure, a place for appreciation, a place I cannot wait to return to.