February 2019 was a generous month in terms of snowfall for the Tetons. With 100 inches on the mountain by Valentine’s Day, it turned into a skier’s dream. What better time than to session big lines all over the mountains? Of course, newly minted Teton local Tim Durtschi wanted to go for a little something different. Already no stranger to big jumps, Durtschi wanted to test his skills on something fresh: flipping the infamous Spud at the Spud Drive-In Theater.

Enter to win your own Polaris General from TGR

With several feet of snow on the ground thanks to the never-ending February storms, Durtschi and some local friends got to work. With some help from the team at the Spud, the crew constructed a huge kicker over the iconic roadside potato sculpture. A backhoe, a Polaris General 4 side by side with Prospector Pro Tracks, and several Polaris RMK snowmobiles helped moved all the snow and pack in a nice take-off for Durtschi to session.

"We had a TGR premiere on Halloween at the Spud Drive In and it was a super cool show that I’m looking forward to it even more this year after we jumped the spud out front!  Once we had the backhoe building our jump, I got super stoked because I knew it was going to work." - Tim Durtschi

TGR sent in a film crew to capture the action, with numerous angles including an aerial drone, two barbie angles, our GSS stabilized camera, and a follow-cam operator strapped into the side by side. After several speed checks, Durtschi started the show. Cork 5s, laid-out 180s, and huge backflips were some of the highlights. 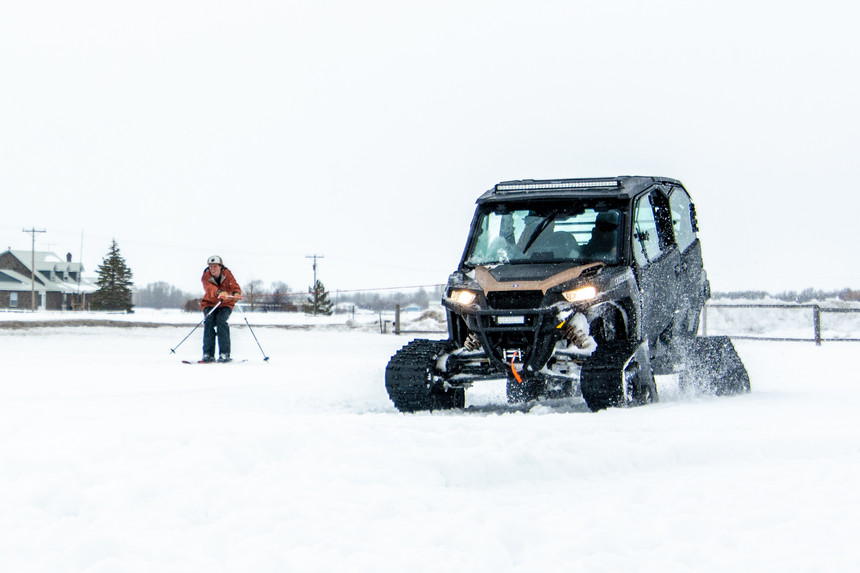 Check back for more action from the Spud this fall. Take a closer look at the billboard, and you'll know what we mean.