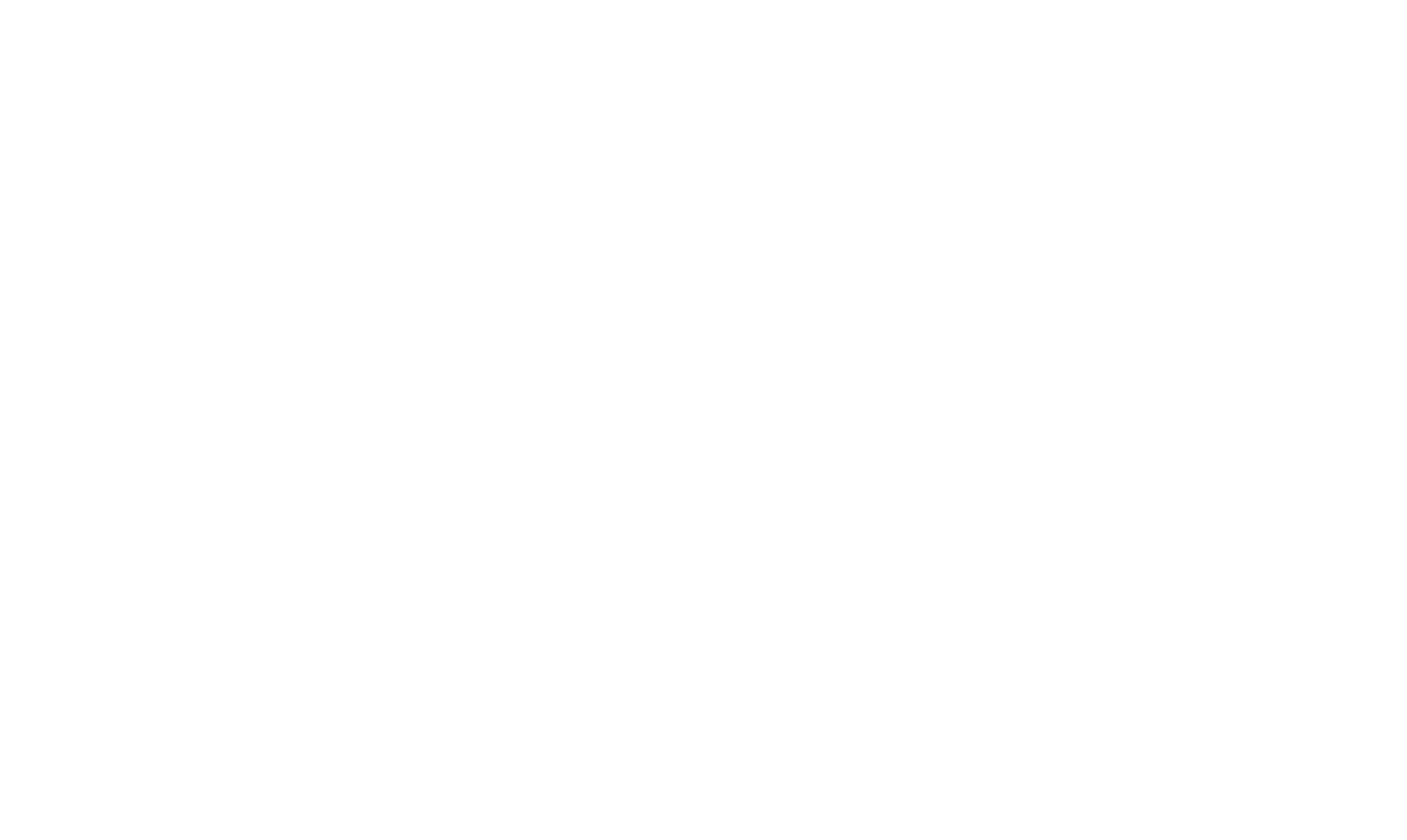 "Free Range: The Costains" explores a father and son relationship that was forged in the snowy peaks and rocky singletrack of Montana. Pete Costain has raised his son Parkin with a free-range mentality, allowing him to explore freely but offering guidance along the way. The short film explores Parkin's rise from precocious toddler to pro skier and examines the challenges and benefits of fatherhood in the outdoors. We sat down with both Parkin and Pete to discuss what it was like growing up in Montana, risk in the backcountry, and why you should let your kids run wild. "Free Range: The Costains" is presented by Moonlight Basin and Outdoor Research.

What’s special about growing up and raising a family in Montana?

Pete: I met my wife Linda in Mammoth, we were both out of college, messing around doing the '80s ski bum thing. A couple of guys I knew had moved to Montana, and it just sounded freaking mythical. I just couldn't even wrap my head around it, so we just up and moved. When we first got out here, we just fell in love with the place. So much of Montana is still wide open and beautiful, the human to space ratio is crazy. Everywhere you look there's a State Park or a National Forest. 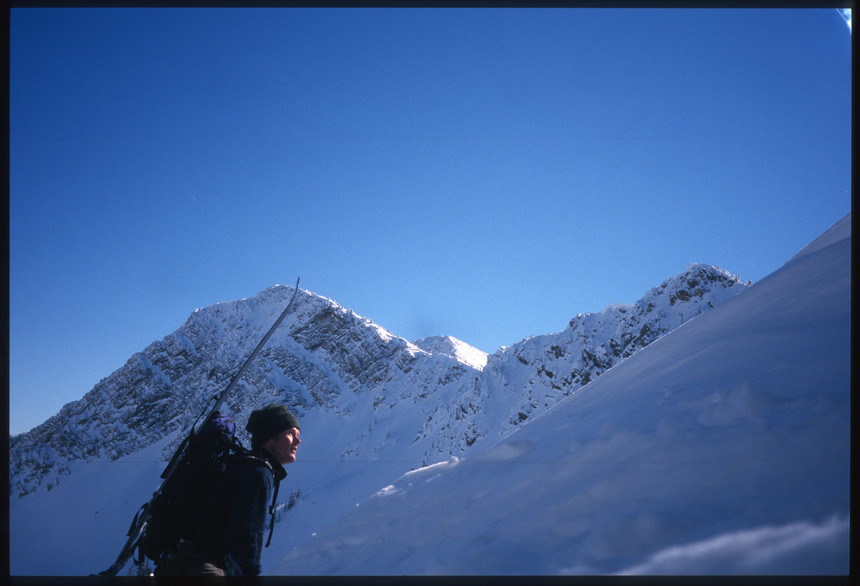 Pete Costain exploring the Montana backcountry in his youth.

When did Parkin arrive on the scene?

Pete: We waited like a lot of people now and had Parkin and his younger brother Lad in our early 30s. The kids slowed us down for sure, a little bit, but we were literally taking infant kids and Kelty backpacks on the chairlift at Big Mountain. So the kids didn't really miss out on the outdoors.

How did you introduce Parkin to the outdoors?

Pete: Parkin was skiing before he was two. It wasn't ever really a thing where we made it feel forced, it was just what the family did. We went skiing on weekends and even took them on bigger climbs on bikes. Sometimes I'd rope the kids up and I'd help tow them uphill, so they'd get to do the downhills. 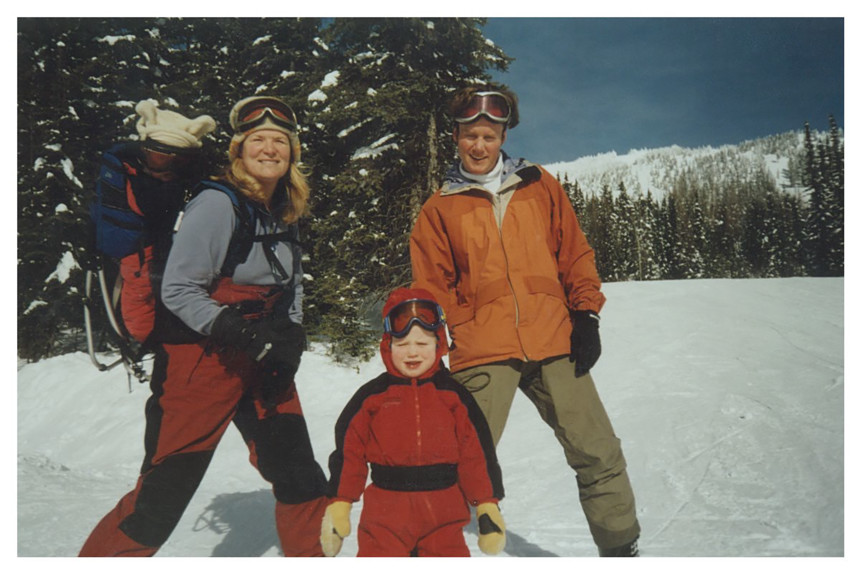 The Costain family out in the mountains.

Do you have any memories from those early days?

Parkin: One of my earliest memories was my parents putting me on a leash to go skiing One time we were out and they looked away for a second and I was gone. They didn’t find me until a few hours later when I was waiting down at the bottom of the resort ready for another lap. My parents like to tell that story a lot.

Pete: Biking took a little longer but they took to it, we made homemade strider bikes when they were both little. We sawed off the cranks and filed the outside of the bottom brackets. They were coasting around on them at around 20 months. Then we realized they didn't know how to pedal, so we had to get them tricycles so they learned how to pedal and then they merged the two. 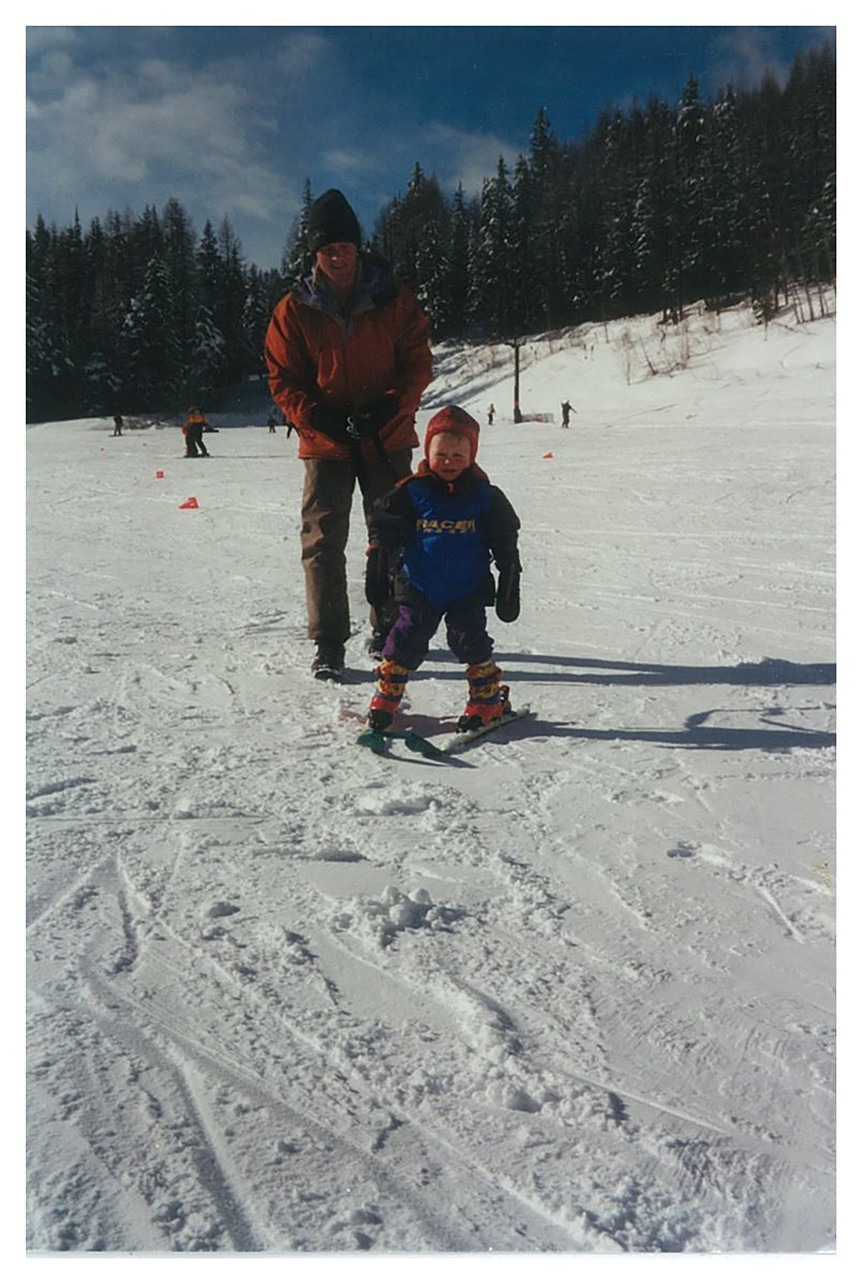 Parkin: When we were four or five, right when we started biking real trails. I remember right when we started mountain biking on longer climbs my dad would attach a rope from his seat post and then tie it to my handle bar just to make it a little easier for us. Those are some of my earliest memories of my dad and me. That’s the way he always brought me up, in the mountains.

Did you ever consider what you were doing was version of free-range parenting?

Pete: You really can let your kids just go outside and do whatever they want and explore. I think they learn so much doing that. “Oh its cold I need a jacket, I got wet I better dry off. Oh there's an animal I better not feed it.” Just instead of holding kids hands into the outdoors, when they were old enough to run around outside we let them. I just feel like there is way, way too much helicopter parenting now. I guess we're helicopter parents in a sense that we were involved with what they do. But yeah, we give our kids a ton of freedom and it seems like its paid off, they're pretty good kids. 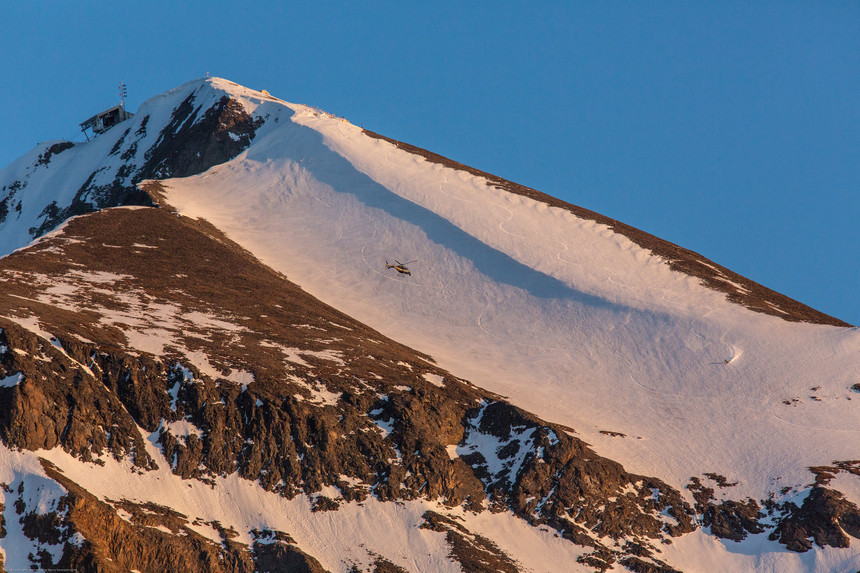 When did you know that Parkin had a special connection with skiing?

Pete: It was just obvious he wanted to ski because when he was in my backpack as a baby and we were making laps on the mountain, he would literally unprovoked just say “Whee” or “Ahhh” in every unweighting of the turns like all the way down the mountain.

I think we probably only had him on a leash for, I don't know, a few weeks? It became pretty apparent early on that Parkin had some serious potential. As a little kid, he was asking questions about the snow, like “It's crusty because it refroze or dad is that going to slide.” He would just ask these questions that most people don't even think about really and he just seemed to engage in the mountains in the way that just seemed really odd for a kid. 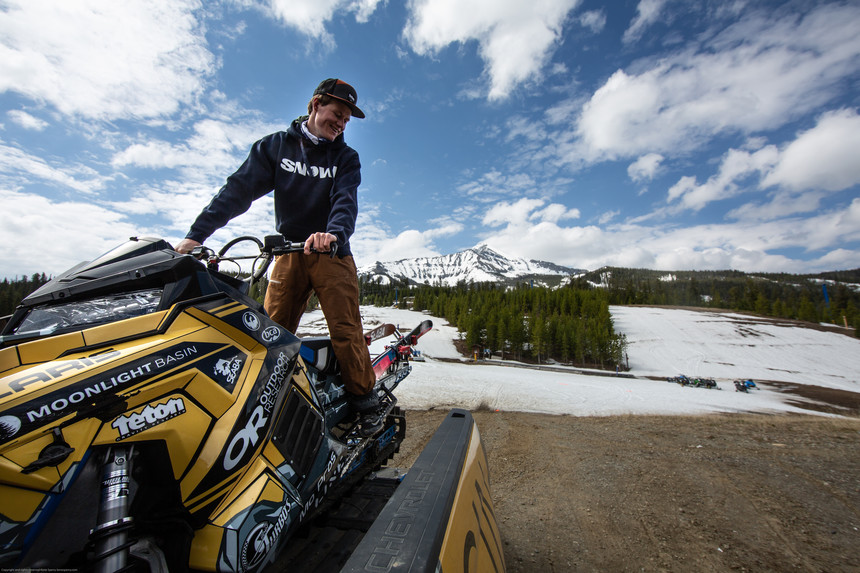 Parkin unloads his sled with the Headwaters in the background.

What was it like growing up and learning to ski in Montana with your dad?

Parkin: Montana has it all. Not a ton of people, super sick gnarly mountains all around you, coupled with some awesome resorts as well. Growing up in Whitefish was perfect for me. It was a good hill to learn on because it wasn’t too intimidating at first and then it gave you confidence as you progressed. You could hit a decent sized cliff and then go ski down a different run and hit another sick line. Being able to access the backcountry in Glacier National Park or any of the surrounding areas with snowmobiles was a huge bonus.

When I was young I never had touring bindings, so I would have these heavy trekkers. I started touring when I was seven years old. We would prep by going skinning on the local hill. There were so many things we could do. Dad always was offering me granola bars. If I was tired he would hand me one and that would help me through the day. Those are some of the more vivid memories I have with my dad. 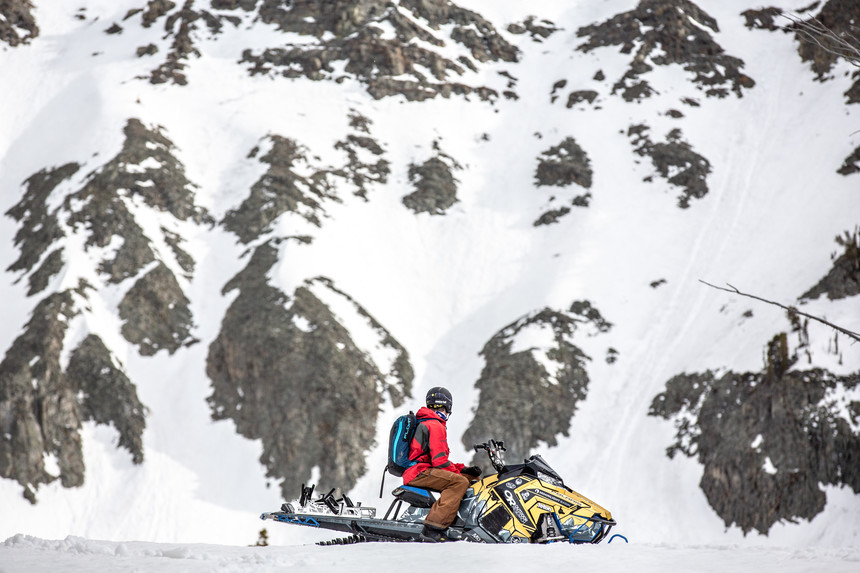 During your time in the backcountry together how have you seen Parkin evolve as a person and skier?

Pete: He's evolved just in the sense that he’s been a methodical, thoughtful kid his entire life. He picks apart a situation and really thinks about it, he's rarely at a loss to what to do. Sometimes he would even beat me to the punch, I don't know whether we'd be moving in or be out touring and he would make a suggestion that hasn't even occurred to me yet.

I tried to impart a whole bunch of snow safety with him. If you get your kid into backcountry skiing you are exposing him to some level of risk, avalanche wise. So I just tried to be really, really blunt about it. Like you can die and this is why I do this and this is why we're not going to do this on a certain day. And he seems to have listened. 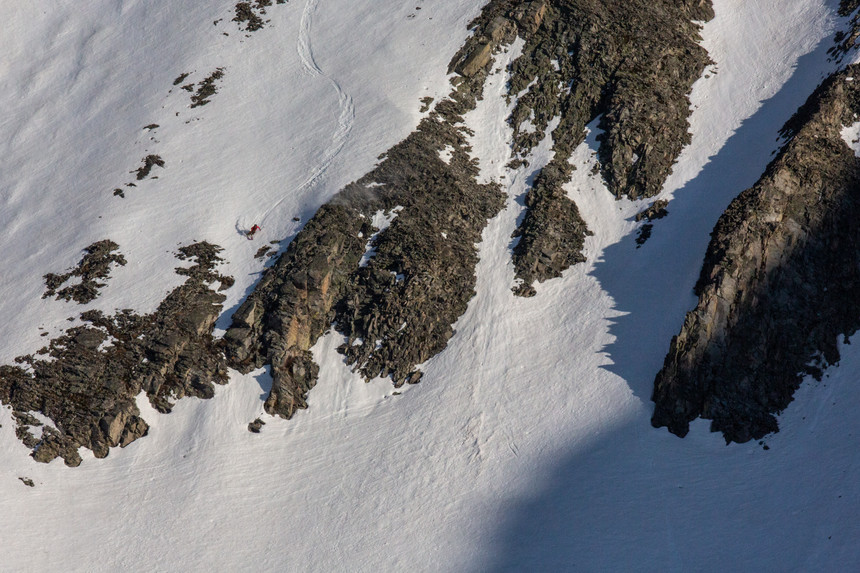 Parkin, how do you deal with all this risk that comes with skiing? Has your dad helped you be safe in the backcountry?

Parkin: I don’t know how I deal with all the risk and I know that things go wrong. I know that it exists. I just try to stay confident in the backcountry. I’ve never really been intimidated by stuff I’ve skied, so if I am I will back away from a line. I ski stuff that I’m comfortable with. My dad brought me up with a really good knowledge of the backcountry and backcountry skiing. Having that base from a young age made me confident in the mountains and allowed me to ski the way I do now.

Parkin: We both know that you can die doing what we love doing. So we always have that in the back of our  heads so we do end up making the right decisions. Growing up and knowing the risks involved makes sure you check everything off the checklist. 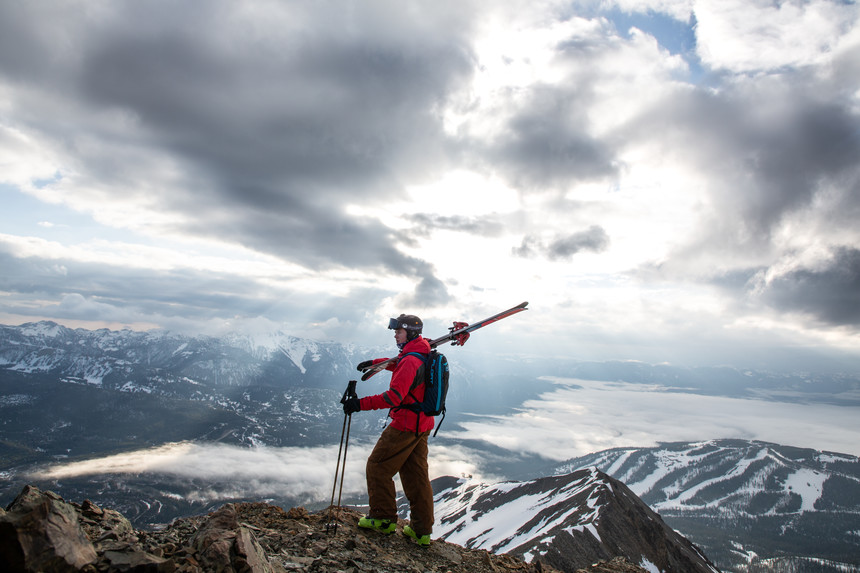 Looking back on your childhood do you think it was unique?

Parkin: My upbringing was definitely not laid back, but unique for what most kids probably go through. They were not strict but wanted us to follow our passion. If we were inspired to go do something they would want us to do it to the best of our abilities. They wanted us to do everything to the best of our abilities. I’m so happy that I was brought up this way, being introduced to the outdoors and encouraged to follow my passions.

What do you hope for Parkin when he is your age?

Pete: When Parkin's older, my age I guess, I'd love to see just a healthy balanced person. Hopefully, he's just got a giant bank of experiences because what is life if it's not what you've done with it?