Grief & Surfing on the Oregon Coast.

The Art of Letting Go

I’m addicted to the idea of quick fixes: Herbal tinctures and comic strip bandaids, liquid courage, five minute phone calls with friends, ten second exchanges with strangers. They’re all quick highs for some weighted, temporary mend of deeper wounds. This is not to say that I do not believe in consistency, or that I have not seen and experienced the value of touching grief and memory. However, in light of living in a time that values quick response: instant replies and reaction at an unsustainable rate — you would be lying if you denied the attractiveness in those blips of promise. A swaying, shallow, fragile road of healing — without the hard part. I’m sold on the idea that healing will just happen with a lazy, painless ease, and I know that that’s impossible, and unsustainable.

Like many others, last year I lost a loved one who was incredibly close to me. My grandpa helped raise me on the water, taught me how to move on it, in it, use it as a tool, and how to treat it with respect and love. The ocean was one of his greatest allies and became a sanctuary for us both - the thing that we shared together. In his absence, I’ve been hesitant to go back to the water, and living in Wyoming has made that easy. To me, the water is something that is overflowing with memory and bottomless emotion. I was afraid that if I touched it, it would bring up things I had yet to deal with. It was the unknown, an area that could not be staved off by quick fixes or band-aids. 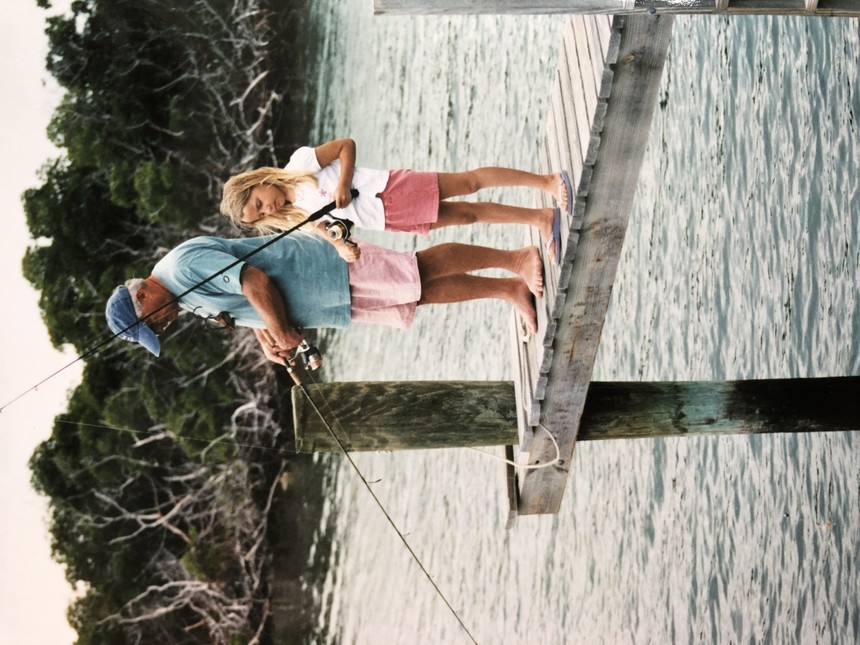 As mud season rolled around in Jackson, and my thirst to be near salt water became stronger and stronger, it was time for something new. I remembered my grandpa telling me stories of how he traveled up the coast through Oregon and Washington and all through the PNW in his 30s. He told tales of cold water and lush, moss covered forests, thick with life, and rocky cliffs that jut out of the ocean. Since then, that place has been seared into my mental ‘To Do’ list. So, one week in May, my partner volunteered his Subaru for a road trip and we jammed it to the brim with camping equipment, wetsuits, booties, longboards, fishing rods and set out for the Oregon coast. I expected to find new places, a change in scenery and some fun waves. But to nobody’s real surprise, I found much more. 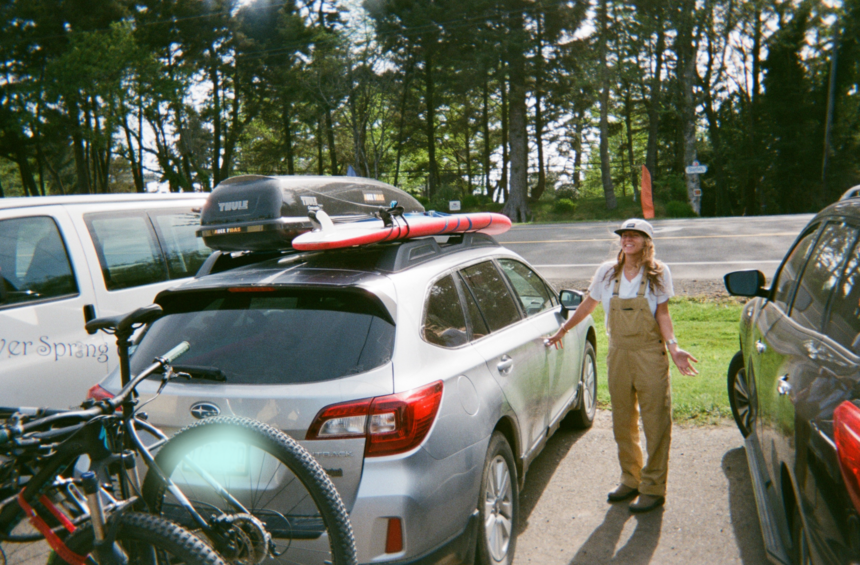 When we reached our first town, I eased into the feeling of comfort as we neared the water and continued to travel North up the 101, rooting down and passing through small seaside towns that were reminiscent of my home on the East coast. The first beach we stopped to surf at, we hauled our boards out of the car, skipped down the stairs to the small waves, tugged our wetsuits on, hoods up and over our heads, slid our booties on and ran out into the water - and to my delight, for the first time in months, I only thought about three simple things: Get in, catch a wave, or simply: don’t. 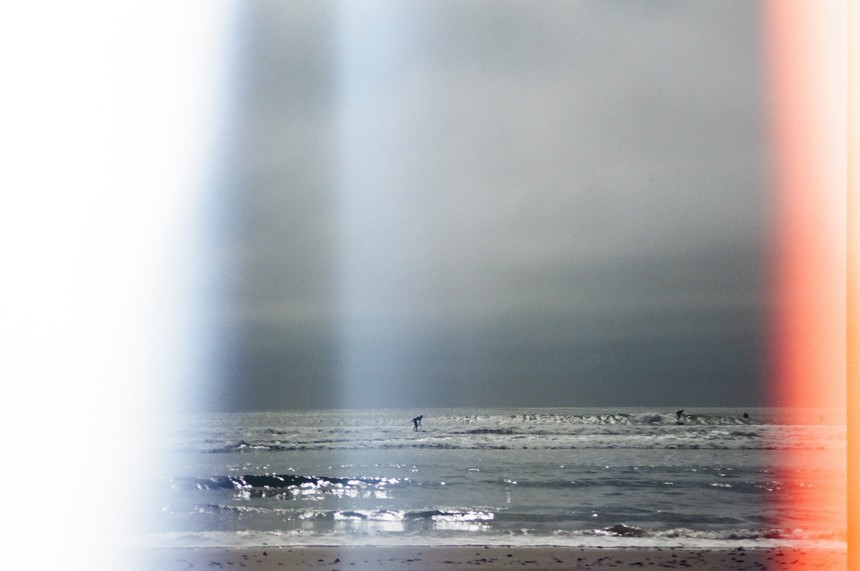 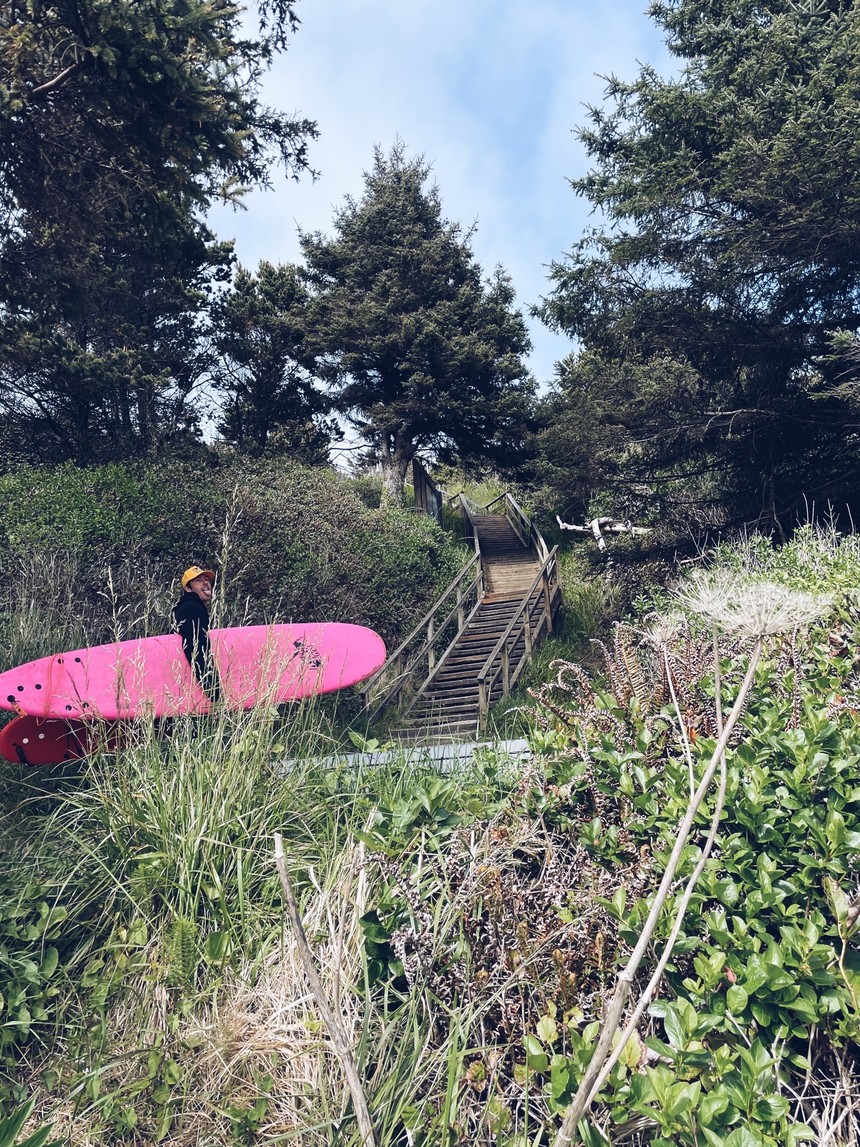 I let the salt linger on my lips, and sting my eyes so much that they were red for days. Fingertips pruned white and drained of blood - numb to the touch from the cold. We stayed there for hours on end, then day after day, bouncing around from beach to beach - floating on the water, getting beaten down by it, moved gently by it, and held down under it time and time again. It dawned on me that this feeling was a different kind of familiar. This feeling felt like grief.

In between sets one day, sitting on my board, a sort of peace came over me. I thought that if I could be out here, floating for hours and catching wave after wave (or not), I would be ok with feeling that way forever. This would be the long fix - the one that would put Band-Aids out of business. “Why is this so nice?” I turned and finally asked my partner who was next to me, eyes on the horizon. He shrugged, looked left and right at the mossy green cliffs that were encompassing us.

“Maybe it’s because we can’t control it,” he said, smiling. “The more you try, the worse off you are. It’s nice because… you just get to let go.”

As we drove the air grew thicker with moisture, and the flora richer and more vibrant with greens. Surrounded by knotted vines and ferns unfurling, the slosh of a grey ocean always on one side of you, it began to feel like what I knew - something I didn’t know I needed.

There was no textbook “perfect” day on the water. It was cold everyday. The sun hardly ever came out, most of the days the waves were sloppy and almost un-surfable. Still, it was perfect to me. 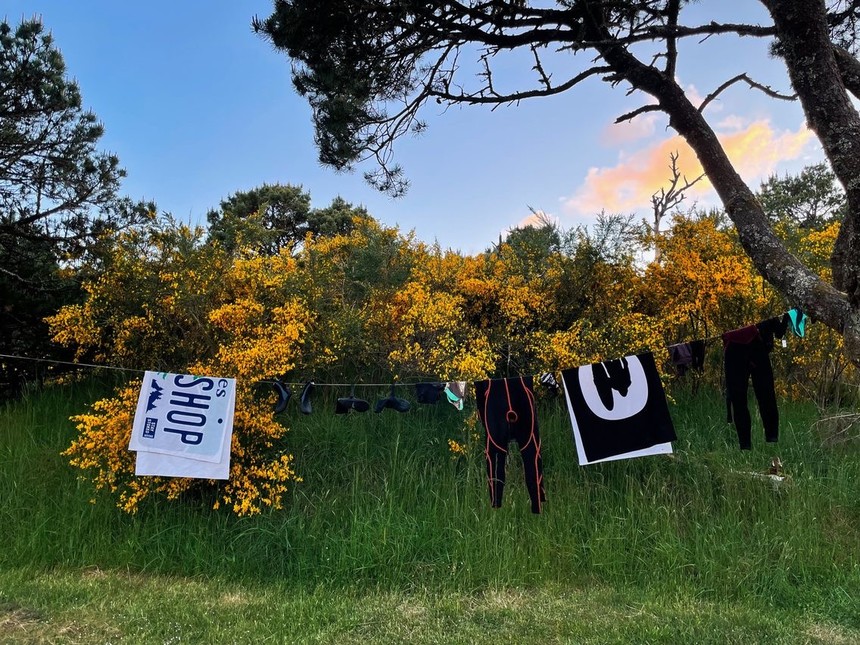 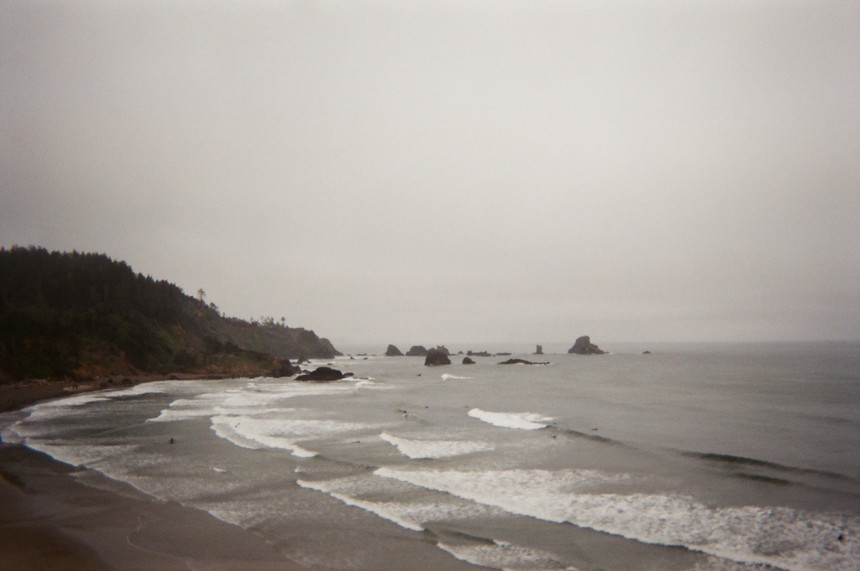 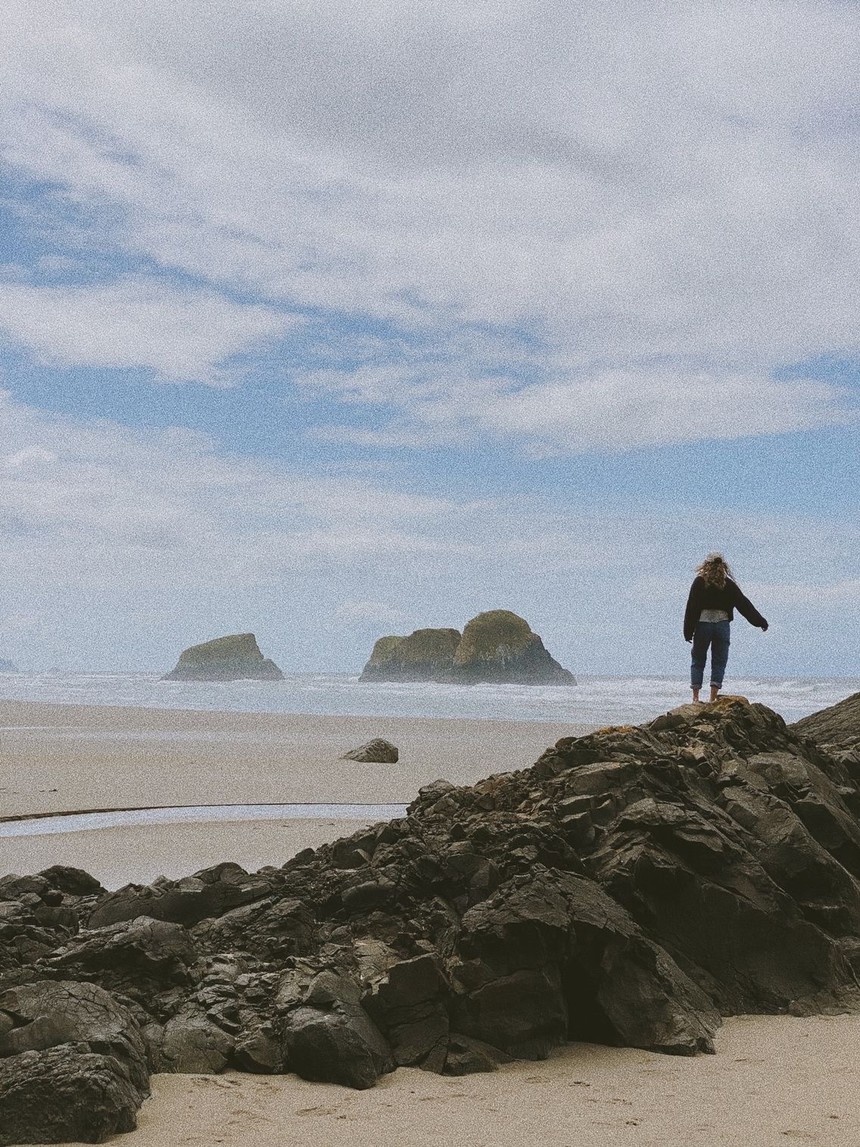 We were there - we were in it. Every day I was reminded to let go. There would never be the perfect wave or a perfect weather day. There would never be a day where the temperature was what is considered to be tolerable by most. There will never be a one way ticket to an easy cure when what you need is in the deep. What you need is to dive in and under the wave and feel the weight of it, touch the unknown. The only thing I could count on every day was that I would get pushed under the water. That I would feel uncomfortable. That I would get tossed around,and on bad days, I would leave the water with half of it in me. It would burn my throat and my eyes and make me so cold I could barely breathe. I counted on those moments to bring me to what I had been avoiding for over a year . When I allowed myself to go there, to feel that pain, I would break through the surface, and feel a blissful, even youthful kind of exuberant happiness - one that reminded me that I was alive. And as many times as the water pushed me down, more times than not, I could push myself to the surface again. Sometimes, it would take longer than others, depending on the weight of the wave. Again, grief is like this. There is time between the waves. There is an uncomfortable moment of forced peace, (if you are not open to it) in between bouts of chaotic or consistent energy. 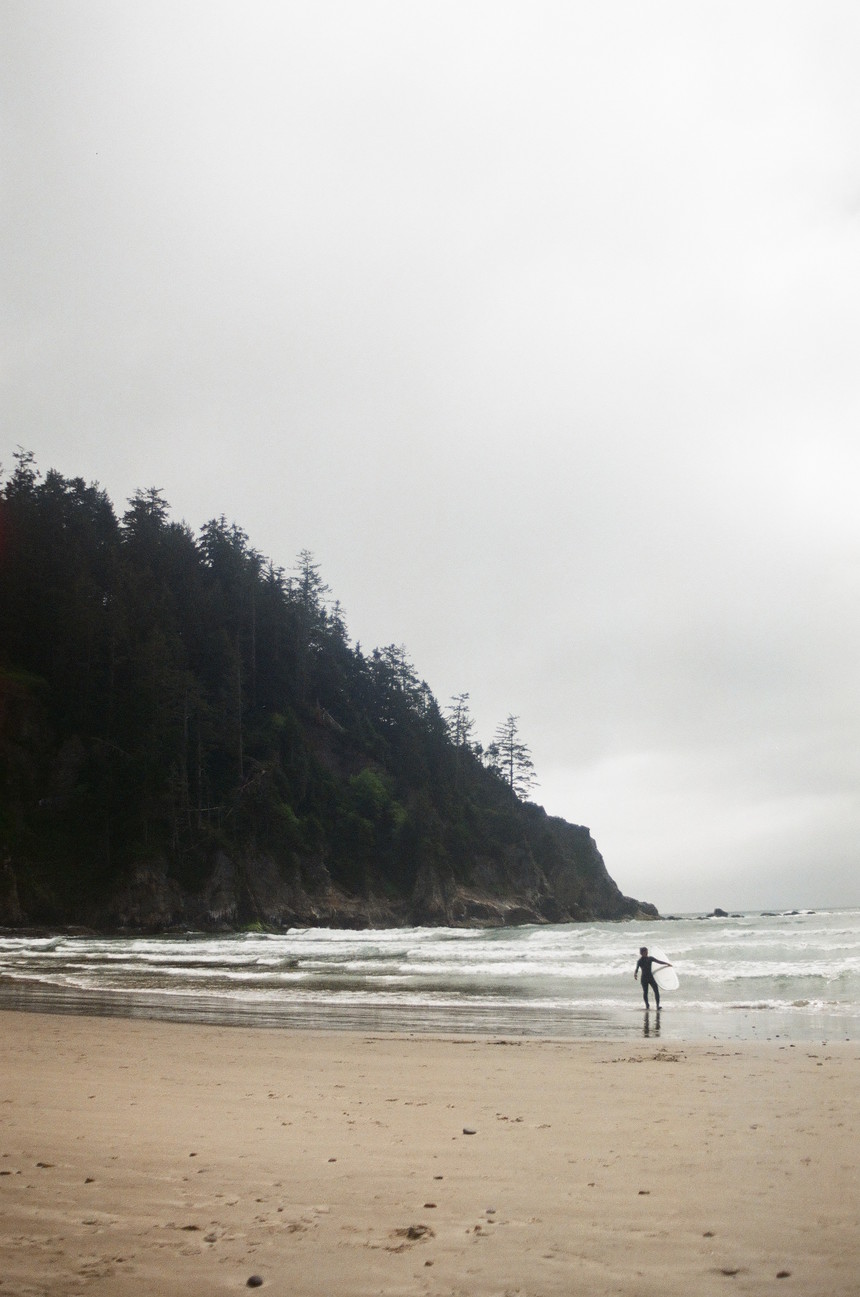 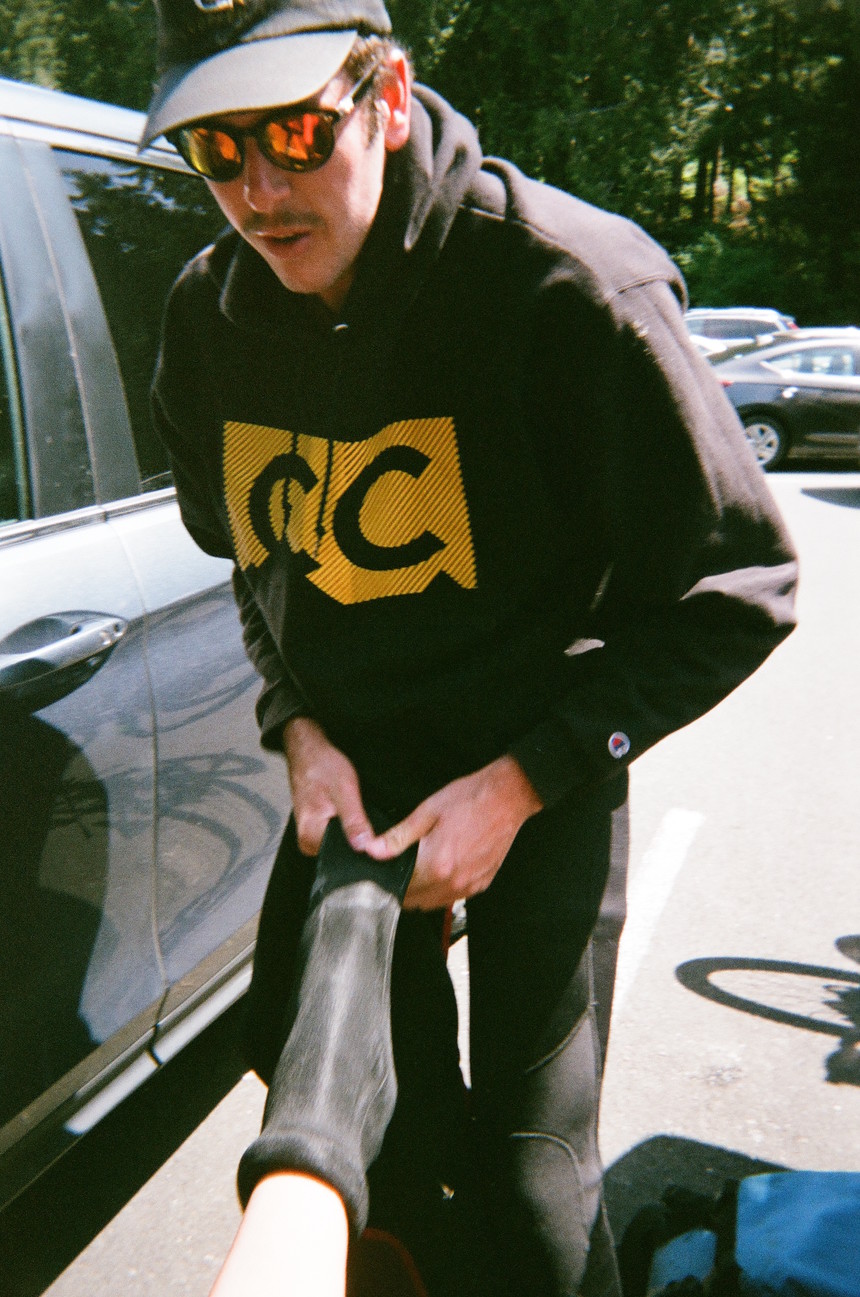 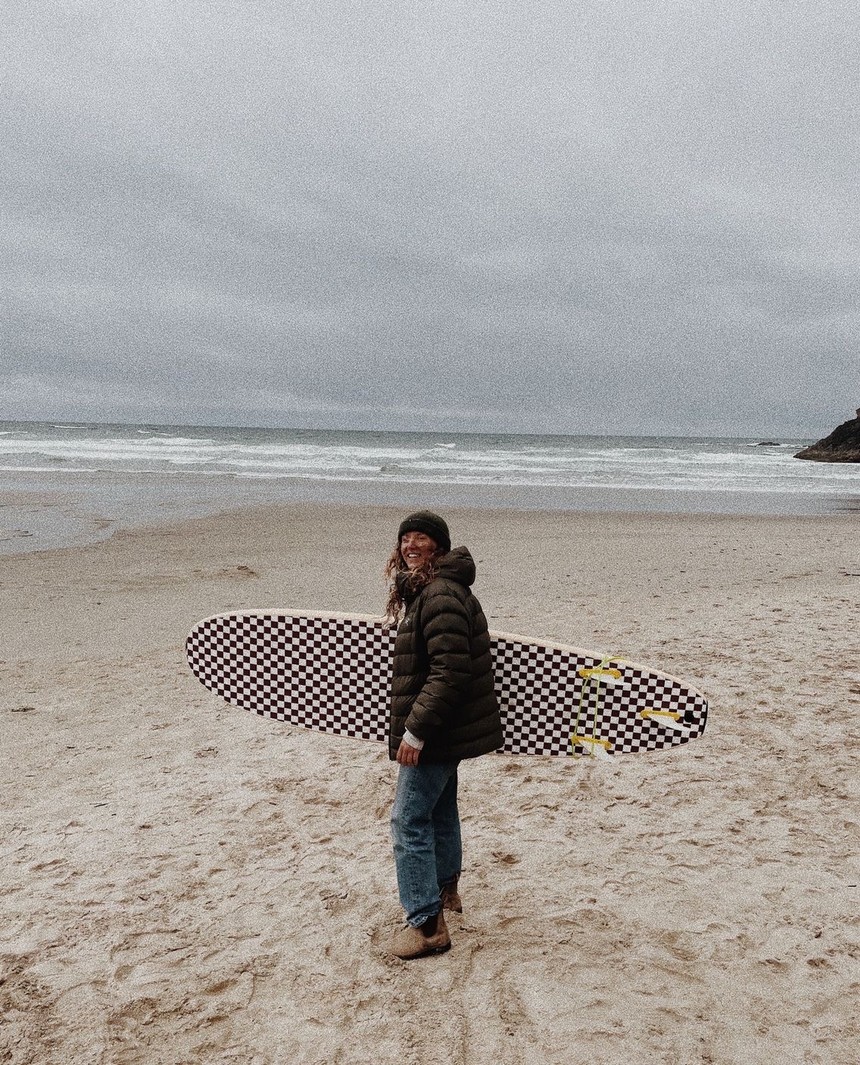 With grief, you can feel it coming. Just like waves. If you resist them, or look for quick fixes, the feeling of grief, and the sadness and anger that comes with it can surprise you, take you away. We resist the wave because it’s scary. But if you resist too much and too often, it has the power to drown you. It’s easy to forget, with our fast paced lives and the immense value we’ve placed in quick answers and explanations, that the ocean is a living, powerful creature with it’s own heartbeat - full of uncontrollable energy. The second you open yourself up to it, let it tell you its story, let it be there for you, hold you, play with you, for a second, you realize it’s ok to slow down, stop resisting, stop expectations, and let go.

As a kid, my mom always told me that the ocean is healing, and as it helped me float in those frozen waters in May, what I found was a deep peace - something that I hadn’t felt since my grandpa got sick. While I was searching and grasping at anything that could make me feel better quickly—anything to give me brief highs— I ended up finding solace in something I already had.

This powerful mass that was the ocean— something that my grandpa and I shared —took control of me and offered me a deep tranquility. Someone once wrote a beautiful piece on ocean meditation and grief, and these lines echo in my head constantly. She writes: “There is medicine for you in the deep. And you will find that when you trust the waves as they come. You will begin to experience a type of freedom that only comes when we have the courage to let ourselves go to the depths of those unknown places.” 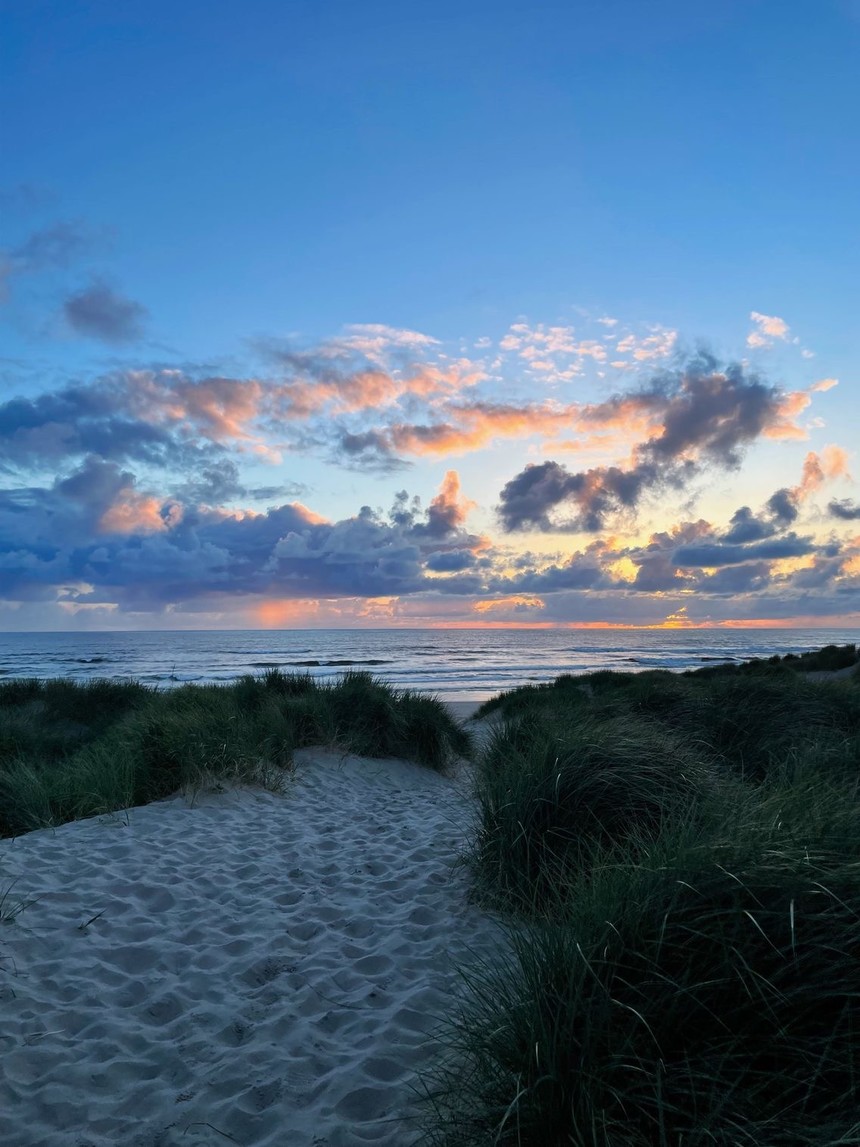 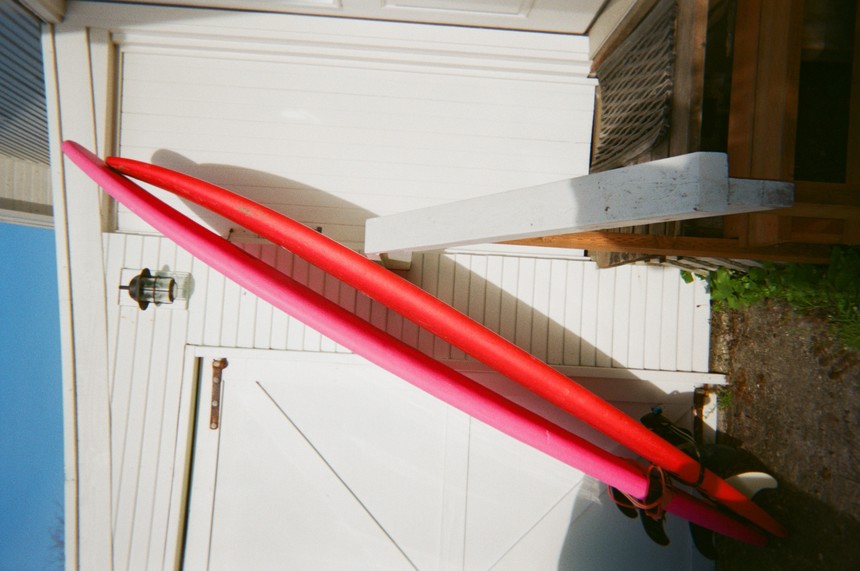 There is a gentle understanding in the water. The ebbs and flows of it, and the strong currents. There can be gentle, consistent peaks of water, or messy, slopping waves - even weighted, destructive monstrosities. The all encompassing natural motion of the world held there is undeniable.

There is something deliberate and so literal about movement that keeps us going, physically and mentally. There is something in this natural antidote and meditation, mirroring us against the world in the center of this sacred kind of stillness.There is something to be said about being part of something bigger than yourself. In Oregon, I realized that while I was spending so much time searching and grasping at anything that could make me feel better quickly, —anything for these brief highs, lazy distractions and musings in the shallow end - in the heat of wanting to control the uncontrollable, I ended up finding solace in the deep, within this powerful mass that was the ocean, something that my grandpa and I shared. Once I went there, let the waves wash over me, carry me back to shore and stopped resisting - to my surprise, it took control of me and offered me a deep tranquility. It gave me permission to let go. 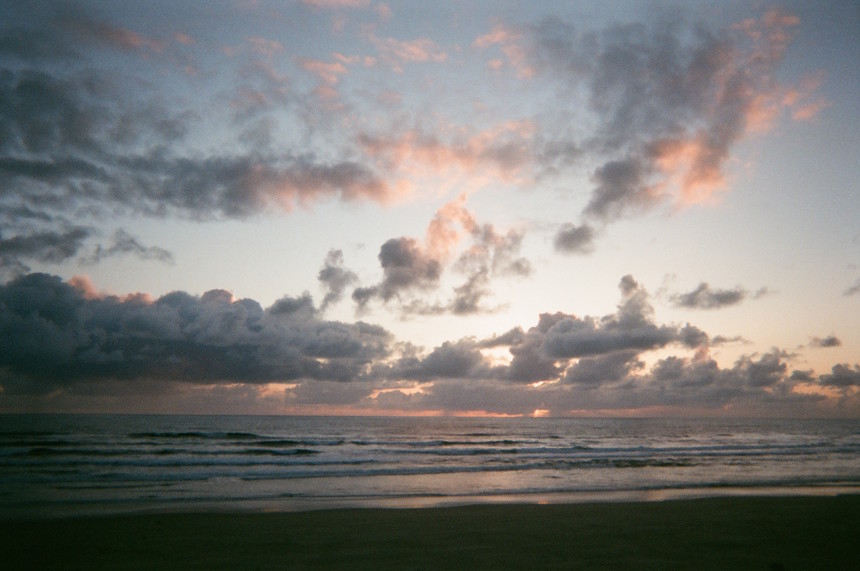