Rules of the River

Click. Click. The gas on the stove ignites. Someone has started boiling water for coffee. This is my alarm clock most days, unless I’m on morning cook duty myself. It’s November and I’m on the Grand Canyon; time really doesn’t matter down here in the ditch. The pace of life is determined by the sun and the moon, so I’ve decided: no watch on my wrist for 24 days. I open my eyes, greeted by the glowing red walls and a large moon setting behind them. Delphinus is still just visible in the sky. There are a lot of things that usually happen on a day in the ditch, but things normally start with a coffee and Baileys followed by a good breakfast, and I’m totally alright with that.

If I’m not rigging the boat, I’m either on cook duty, dish crew or groover duty. This rotates daily and every fourth day, I’m off! The Groover is a very important metal box; it carries all our poop downriver. A morning groove is essential for a successful day. Peeing in the groover is off limits as this may cause it to explode. This takes training and concentration so finding a peaceful location is important. 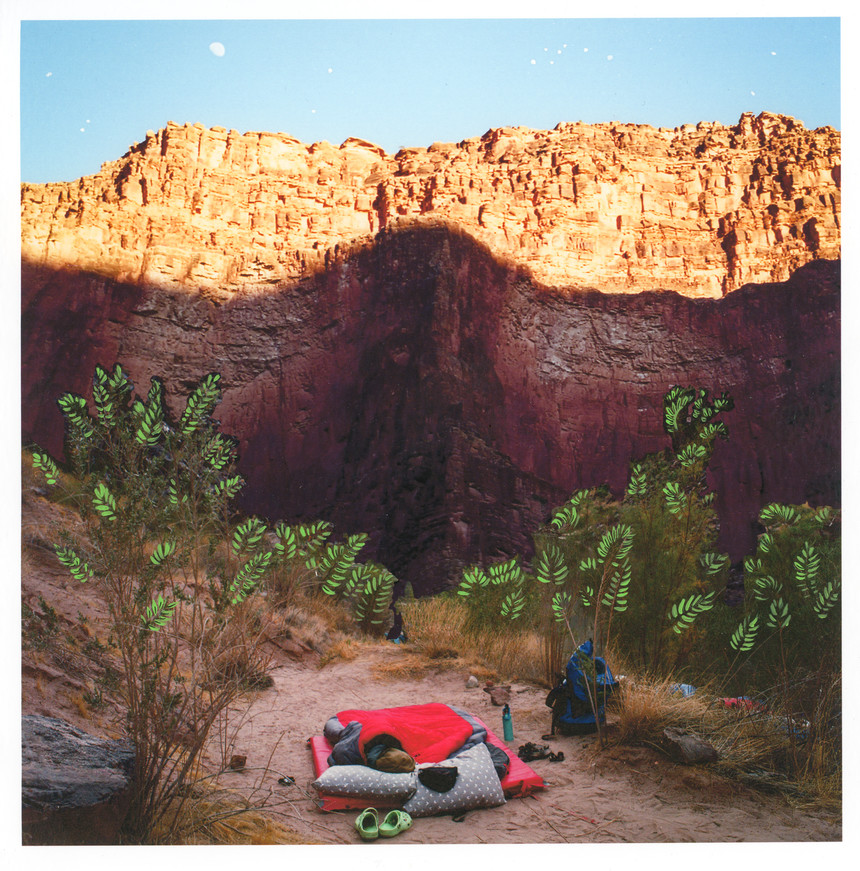 Once the boats are rigged and our stomachs are happy, we normally gather around before we push off. Every day, one person gets a chance to share something with the group, whether that’s an experience or something they’d like to see more of in the world. These are some of my favorite moments on the trip, and our group generally took this opportunity as a chance to collectively reflect or share stories together.

If it’s a really good day, we’ll start with a sound laser. I’ll never forget my first one. We stand in a circle, holding hands and someone normally takes the lead. They’ll start by setting an intention for the group. We all close our eyes and think about what we’re grateful for in that moment. The leader starts the sound laser once they’re done contemplating, taking a deep breath and letting out a quiet low hum for as long as their lungs will allow. On their second breath, the sound of the hum gets a little louder. Everyone follows along, and with each breath the hum slowly becomes a roar until we’re screaming our lungs out and making a wall of sound echoing down the valley from the depths of our souls. When we can’t scream anymore we make animal noises and jump around like the wild beings that we are. It’s an overwhelming feeling of joy and happiness that’s hard to beat, and the perfect start to a day on the canyon. 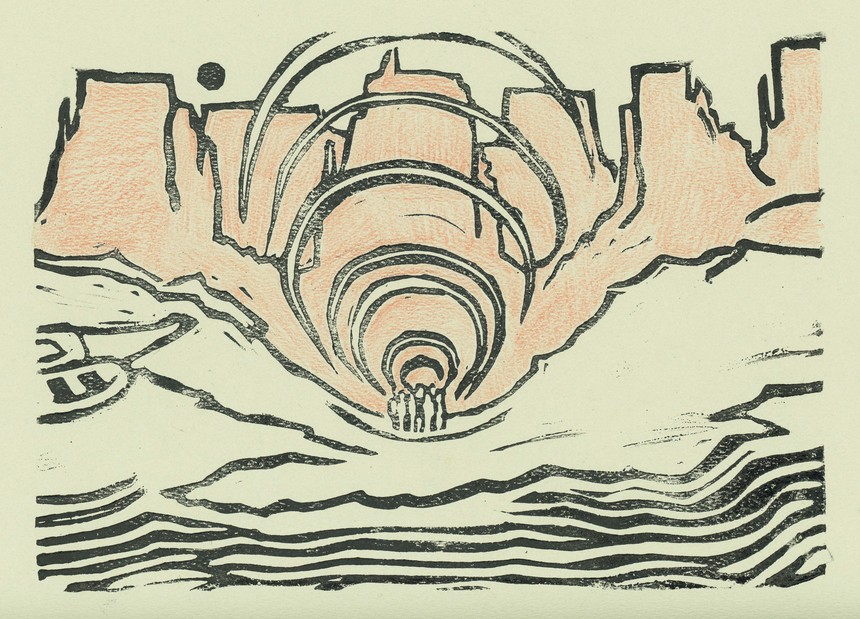 There are days that we need to push miles down river, so we row all day. My hands have cycled through the first stage of cracking and drying. They’re growing fresh new skin underneath the blisters, and I’m not even captain of the boat! I’m impressed by my body’s ability to adapt to the new challenges of the environment. The fears that lurked in my mind before this trip have all but dissolved and I feel totally at ease. I have 15 new best friends, we are in our bubble, and everything we need in the world is floating down the river with us. 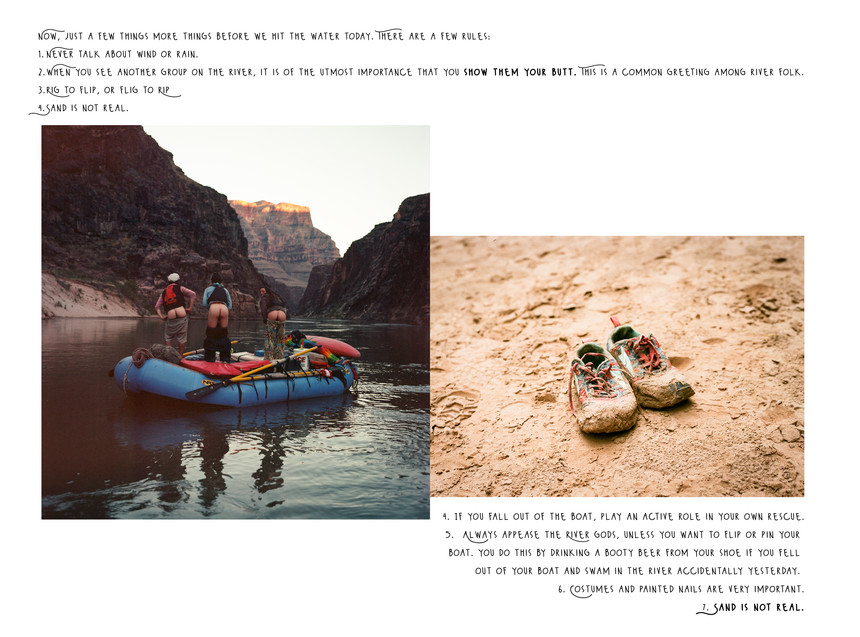 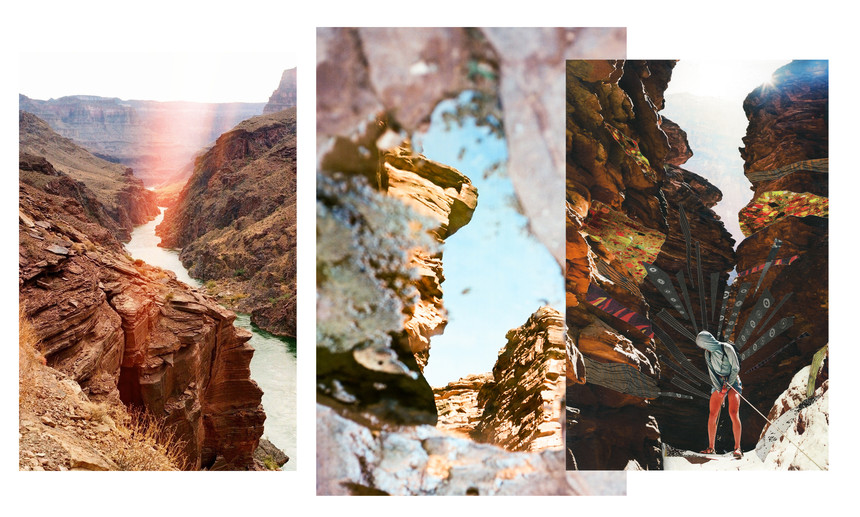 Sometimes we row a few miles and start the day with a hike. I love the days that we get to walk, zig-zagging up through the cliffs. The colors of the rocks change from red to green and almost teal. If we hike above the rim the views are sweeping and vast. Condors soar overhead and the wind whistles through the cracks in the rocks. This is nature's best work; it’s truly breathtaking.

If we’re not hiking high above the Colorado, we normally walk up into the canyons that feed as tributaries into the river. Having some keen climbers in our group, we even spend a few days lowering ourselves into slot canyons. These are magical to say the least. Our voices echo off the canyon walls as we wander without purpose, taking the time to ponder their creation and inspect the smallest rocks, grooves and indentations on their walls.

The most exciting days are normally the ones in which we get to feel the power of the river itself. As we row up to a scout point, we can hear the rumble of the water rushing through the canyon up ahead. There’s also the telltale blast of wind as we come around a bend to a rapid. That’s normally when I start to feel the tingling of nerves kick in.

Knowing how to read the water and how it will affect your boat takes skill and practice. This is a skill I don’t yet have, so I tend to watch and listen as the others discuss their game plan. At this point, there is normally someone passing around a bottle of duct taped whiskey for a little extra courage, I normally have a swig or three depending on the rapid.

Scoping lines is a big part of the game. Charlotte Percle art and photos.

Without discussing it, most people know when it’s time to go, and we naturally head back to the boats and take our positions. The mood changes in this moment, depending on the consequence of the rapid. Once we push off the beachside there’s no going back, only forward, so I figure I may as well enjoy the ride. 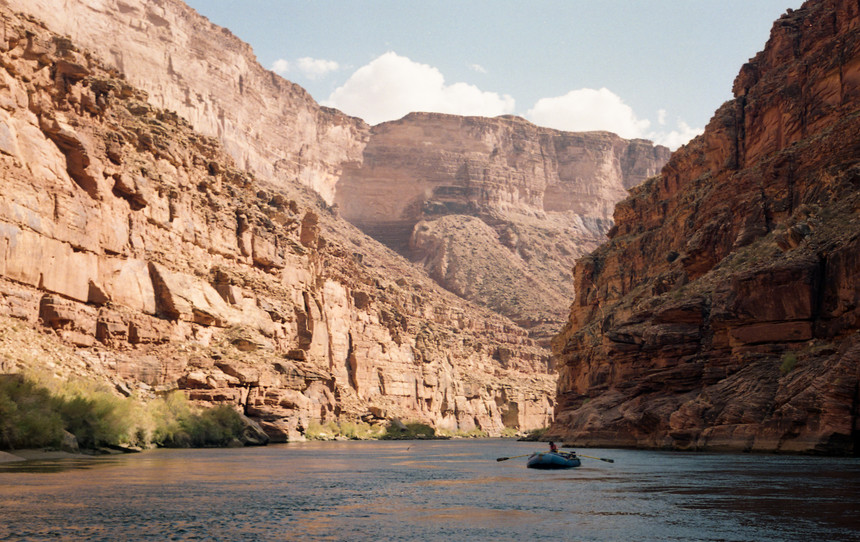 The controlled chaos that ensues is amazing. Waves blast over the hull of our 18-foot raft, totally burying us in water. I look into the river's dark and menacing eyes as we pass by holes and churning water, weaving between the madness.

A particularly memorable rapid on this trip for a lot of groups is Lava, mainly because it has the highest rating and biggest reputation on the river. Swimming in lava means getting sucked to the bottom of the Colorado river, a quiet dark and cold place. “If you flip, remember it’s only 20 seconds of your life. Then it’s over,” someone murmurs while passing the whiskey.

However, Lava isn’t the first rapid that springs to mind when I think of rapids on the Grand Canyon. It’s Bedrock. This rapid is a class 7 unlike the rest. “Fuck that Rapid”, Kyle says as we finish scoping it and walk back to our boats. The river bends right just ahead of us and in the very middle is a large fin of Schist (a dark, sharp rock formation that looks like Godzilla sleeping) in the middle of the rapid. There are two ways through, one being to ride the right hand tongue of the rapid, waiting until you’ve cleared the rocks that are blocking your escape and then hitting the gas as hard as you can to avoid being sucked left by the current and getting pinned on the rock. Or simply getting bounced left, which is the second way through this rapid. According to the guide book the left run is “not recommended”; there is a recirculating eddy, lots of rocks and a small waterfall on that side in low water. 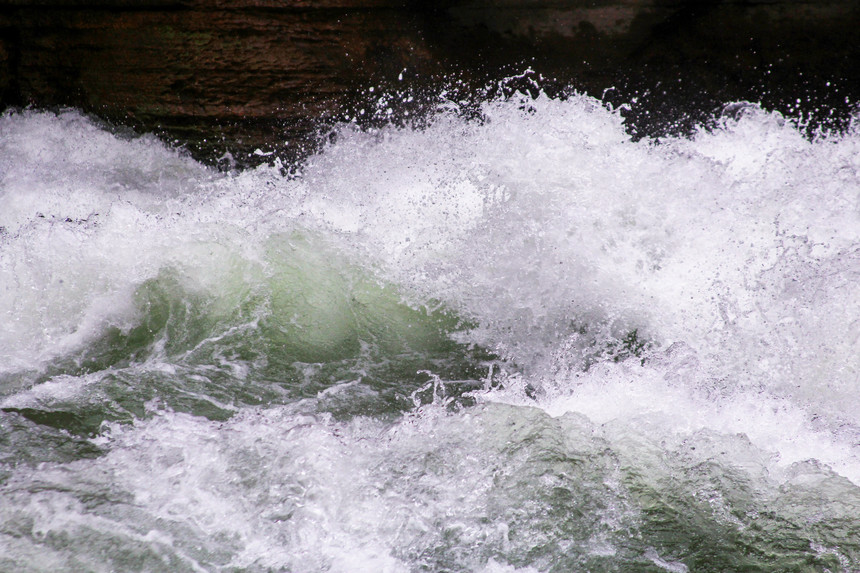 Led Zeppelin is blasting as we push off, another group has arrived for scouting and waves us goodbye. Nick leads the group of boats out, floating towards the boulder. He stands in his boat watching the rocks he needs to avoid on the right side of the river. Just before he passes them, he starts paddling hard, slowly slowly building momentum. His boat inches right and a little more, he makes it and floats out of view as Murphy’s boat is now approaching the crux. Sam is at the oars, and it’s only his second or third day rowing ever. “They’re not going to make it”, Josh says. As he finishes his sentence Murphy jumps out of his seat onto the oars trying to salvage the situation but it’s too late. The fully loaded boat ricochets off the rock at a surprising speed and flies out of view, heading left into the churning water. Next up it’s Adelei, an experienced and badass river guide at the oars and Max. She’s pulling right as hard as she can, fighting the river that’s dragging the boat left. Her boat hits the rock dead in the middle, spins them violently left as they disappear.

Josh and I look at each other wide-eyed in disbelief for just a moment and return our focus back to the river. Time has slowed down. If you flip, it’s only 20 seconds of your life. Josh is standing up now, and has started lightly paddling. Jack, our trip leader is next in line for battle as we both float towards the tongue of the rapid. I can see already that he’s not going to make it. All his efforts seem to be having no effect on the direction of the boat. They slam into the wall of Bedrock and their boat starts to lift up as they start to high side for a moment before being deflected left. Shit. 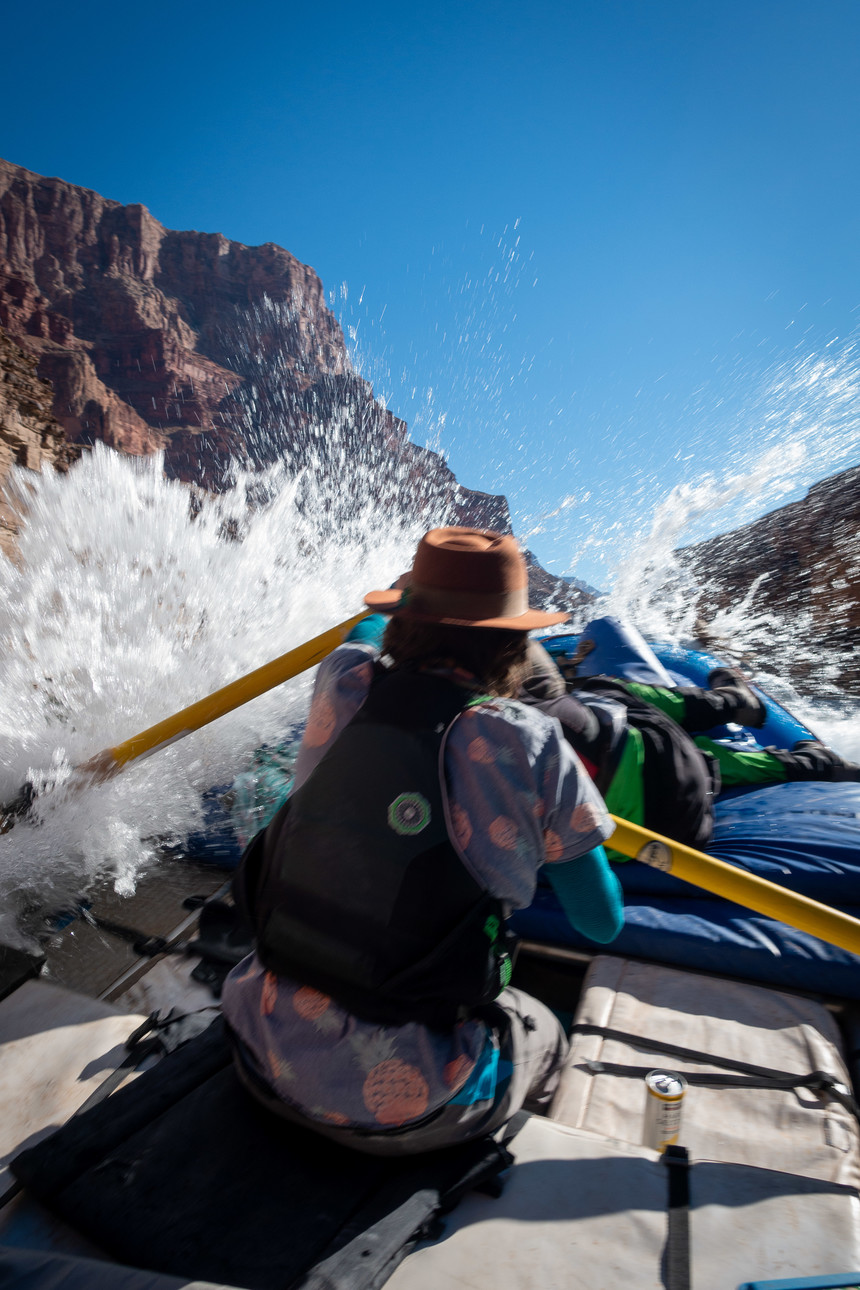 Amongst it. Nick Braun photo.

Three boats out of four go left, now it’s our turn. The odds seem unfavorable. It feels like a slow-motion car crash, we’re slowly picking up speed towards the rock now. I’m mentally preparing myself for what lies ahead, and just keep yelling “You got this!” while Josh is rowing with everything he’s got. We floated up so close that I could have reached out and touched the sleeping giant. Then, somehow at the last moment we start to veer right. I turn around in pure disbelief, Josh is yelling “Yes!”

Nothing goes severely wrong that day. A few broken oars at most. Everyone survives the left side of Bedrock to tell the tale and we float a mile or so onwards to another large rapid just downstream. It just keeps going out here.

As the day winds down to a close, we find a campsite and de-rig once again, unloading our cargo onto a beach and setting up the kitchen like clockwork. If the sun is still up sometimes we’ll hastily throw our clothes on the beach and have a cold dip in the river. There are people playing instruments, drawing, practicing yoga and journaling. 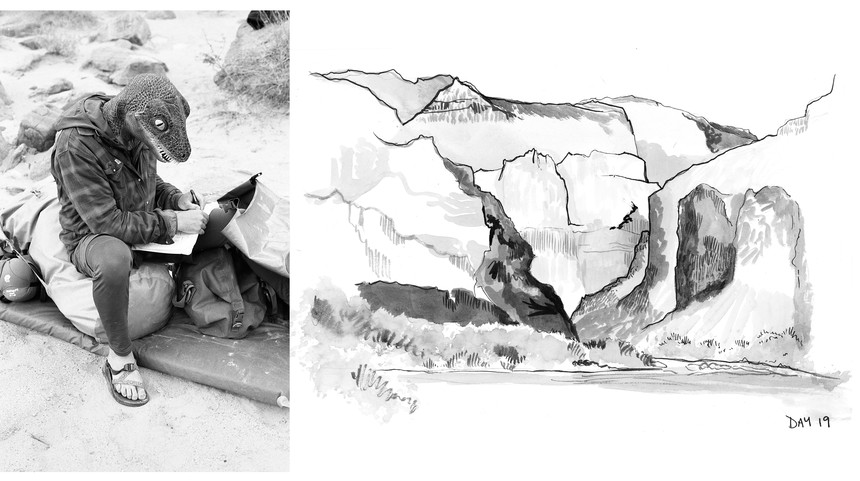 The moon rises again and Delphinus lights up in the sky once more. This has become our new routine and everything in between is the experience we’ve come down here for. The thought of being so removed from your day-to-day life for long enough to begin living a new one fills my mind with possibilities of how many forms one’s life can take. What an exciting thought, to think that you can live several lives in a single life.

Despite time being off the agenda for this trip, I found myself thinking about it. I thought about the constraints that it placed on my daily life above the ditch. My time is my number one commodity and I thought about how much I valued it and analysed how I was spending each second of it rather than just trying to be content in the present moment. Always looking forward or wondering if I made the right choice yesterday. 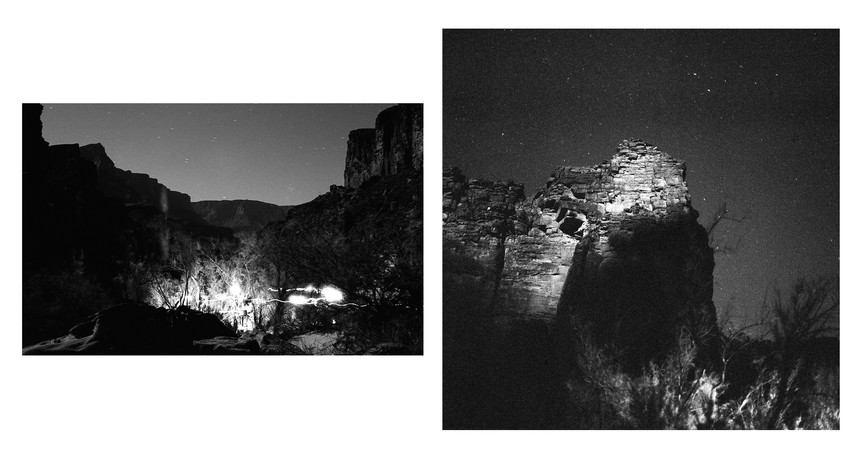 I also thought about how it’s often hard to know what moments in your life are the most important until looking back retrospectively, as if nostalgia helps decide. All I knew at that moment was how these short 24 days would be incredibly important when looking back one day.

Final rule: If you ever get invited to raft the Grand Canyon, always say yes.