I’m overwhelmed. Already. It’s a few days before Thanksgiving 2019 in a pre-pandemic world, and we’ve just sat down for our inaugural breakfast in a tiny side-street café in Oaxaca City. The menu in my hands is chock-full of things I’d like to indulge in, and of course I can’t decide between the eight different kinds of hot chocolate listed, so I ask for some advice. Our group consists of my partner Lily, myself, and our new friend and local mountain bike pioneer Alvaro Gutierrez. Fresh off about as convoluted a trip down here as we could have mustered, we’re famished and admittedly a bit overwhelmed by the culture shock of landing in one of the most vibrant cities in Mexico.

“Trust me, get the spicy one,” Alvaro informs me. Spicy hot chocolate? Sure. I order one and a plate of eggs with some sort of mystery mole, but somehow it all sounds delicious. I know Oaxaca is famous for its culinary scene – mole, tlayudas, tejate, chapulines, and all manner of coffee and chocolate, so why not start off the adventure right away? Looking back as I write this, getting my mouth burned by spicy hot chocolate that was too good to put down really set the tone for our whole week-long trip to Mexico’s mountain biking paradise. I can’t say I’ve ever got to experience a new-to-me place quite the way we did that fall – getting our fill of singletrack, mezcal, and culture so beyond our imagination, all while knowing we barely scratched the surface. 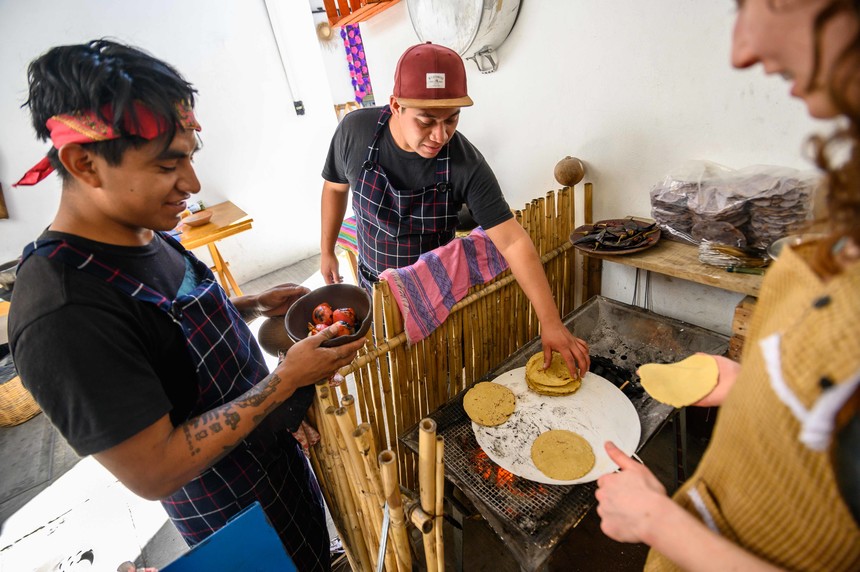 After our chocolatey breakfast, Alvaro leads us through the streets of the waking city back to our hotel. Just a few weeks before, these blocks were brimming with loud music and masquerading locals celebrating Dia De Los Muertos – Mexico’s famed day of the dead holiday. Strolling through the alleys of downtown, remnants of the party are still visible everywhere: skulls, confetti, posters, and street art dedicated to honoring the city’s ancestors. We head back to the hotel and load up our bikes into the back of Alvaro’s shuttle rig parked in front – a Nissan pickup stripped down the essentials and filled with food, water, gas, and enough spare parts to fix a fleet of bikes.

For anyone familiar with the US enduro racing scene, you might recognize Alvaro as one of the race organizers of the Big Mountain Enduro race series. A dark-haired, tan, and fun-loving Michoacano, Alvaro has been around mountain bikes for most of his life, competing on a national level in Mexico before dedicating his life to sharing the sport with others. Over two decades of riding experience and frequent trips north of the border gave him a taste of what mountain bike trails and community could look like, and he brought that experience back home with him to create a paradise of his own, utilizing the hundreds of miles and thousands of vertical feet of trails just outside the city. 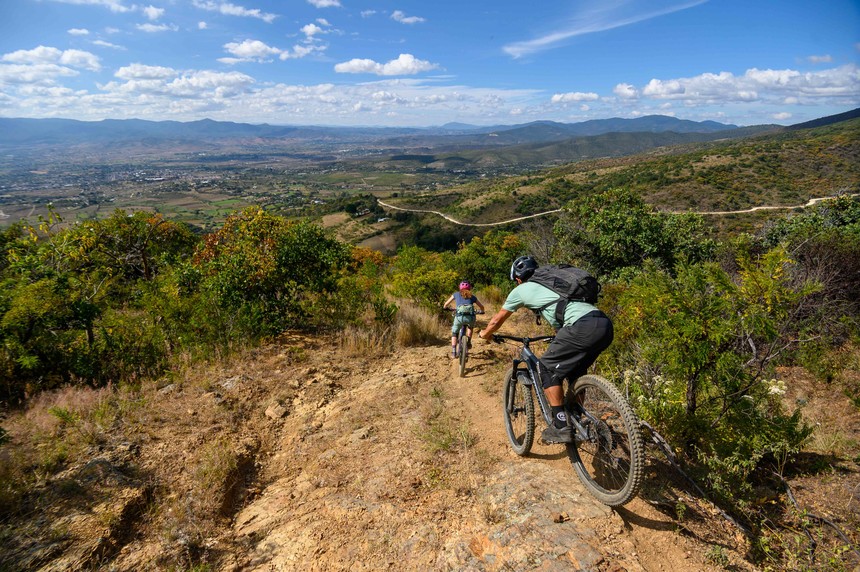 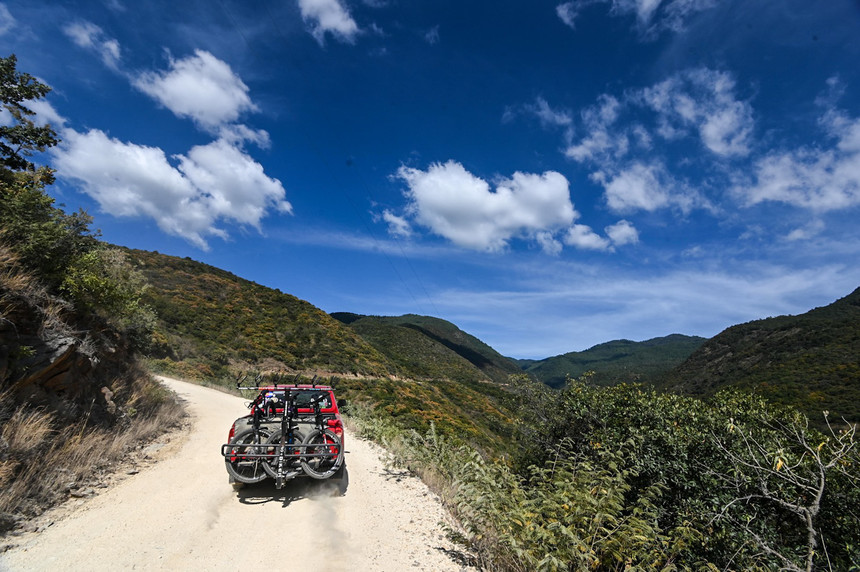 In 2017, after a few successful seasons helping to manage the Big Mountain Enduro series stateside and even bringing a bonus event to Mascota, Mexico, Alvaro was ready to dive into his own venture. That year marked the first Trans Sierra Norte race, an open invite multi-day enduro race that criss-crossed its namesake mountain range in Oaxaca. Now in its fourth edition, the Trans Sierra Norte Enduro has become a world-class affair attracting some of the best riders in the world, including the likes of Jerome Clementz and Richie Rude. Of course, for many the main attraction is the party surrounding Day of the Dead, and it’s no surprise Alvaro has chosen to host the race during one of Mexico’s wildest holidays. 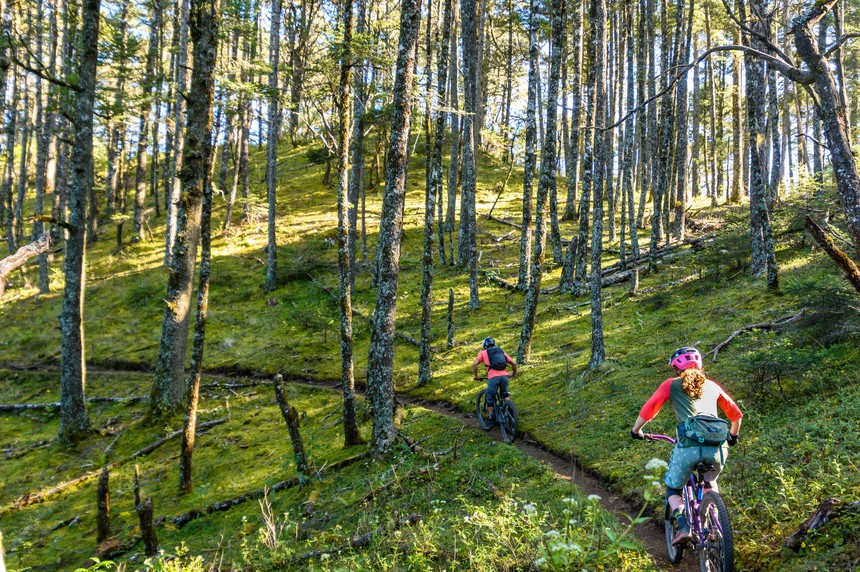 In some way, the ancestors celebrated on that day are what had made this trip possible. Oaxaca City is an ancient metropolis – one of the oldest on the continent, with the nearby Monte Alban archeological site dating back to 450 B.C. The local indigenous cultures, namely the Zapotec and Mixtec people, have lived in the Oaxaca Valley and the surrounding mountains since long before the Spanish colonization, creating vast networks of trails into the Sierra Norte range that towers above the city. For the past few years, Alvaro and a team of local riders have been putting in the work digging and shaping trails to turn these mountains into a world-class bike destination, and that’s exactly what we came here for. The Sierra Norte rise out of the north side of the massive Oaxaca valley, with a staggering relief of nearly a vertical mile, with hundreds of miles of shuttle-able singletrack waiting to be devoured. Alvaro indulges us, introducing us to these mountains by way of a few days of shuttle runs to get us acclimated in the Etla and Ixtepeji areas.

A few days in, we’re feeling ready to explore a bit deeper in the mountains on some trails that Alvaro and his friends have recently refurbished. The funny thing is these mountains don’t actually look big from far away compared to lesser ranges elsewhere in the world. There’s no snow or rocky high alpine here, rather the tops of these peaks are actually home to some of the tallest trees and densest woodland in Mexico. In fact, the climate zones are almost flipped on their heads compared to more northern latitudes, with biodiversity visibly increasing with elevation – all manner of colorful birds and butterflies flutter around the tall pine and oak trees up high. Of course, it’s not just about the fauna here, but also the prickly giant agave plants. “That’s going to be mezcal soon,” Alvaro laughs, pointing to one twice the size of him. Agave is the main ingredient in Mexico’s most famous spirit – Mezcal – and Oaxaca is home to over 40 different types of it.

After stopping by a roadside shop to pick up a shuttle driver (a friend of Alvaro’s whose son has helped build some of the trails), we wind up a paved mountain road past La Cumbre de Ixtepeji, then turn off into a veritable maze of fire roads that we wouldn’t have stood a chance of navigating on our own. After a 45-minute ride to the top, we’re finally ready to drop into the descent we’ve been talking about since we got here. Truth be told, I have no idea what to expect of the trail he calls El Toro, but maybe the bull skull hanging from a tree at the entrance should be a warning. “Has Alvaro thrown us gringos into the deep end?” Lily and I wonder, as we follow him down an increasingly gnarly ribbon of singletrack. Let’s put it this way – the local indigenous people who created these trails centuries ago had one thing in mind – getting themselves and their animals up and down these mountains as directly as they could. If at all possible, the trail goes in a straight line, no matter how steep or rocky the ridge it follows is. 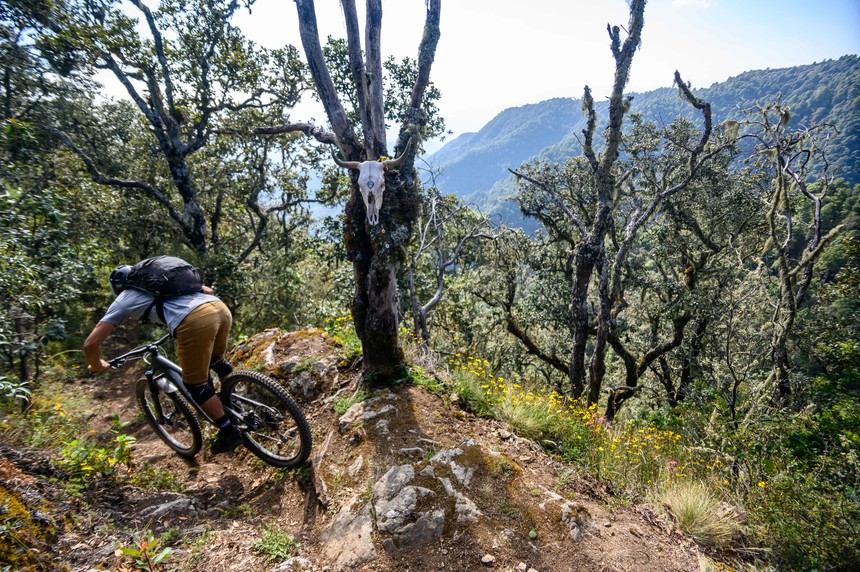 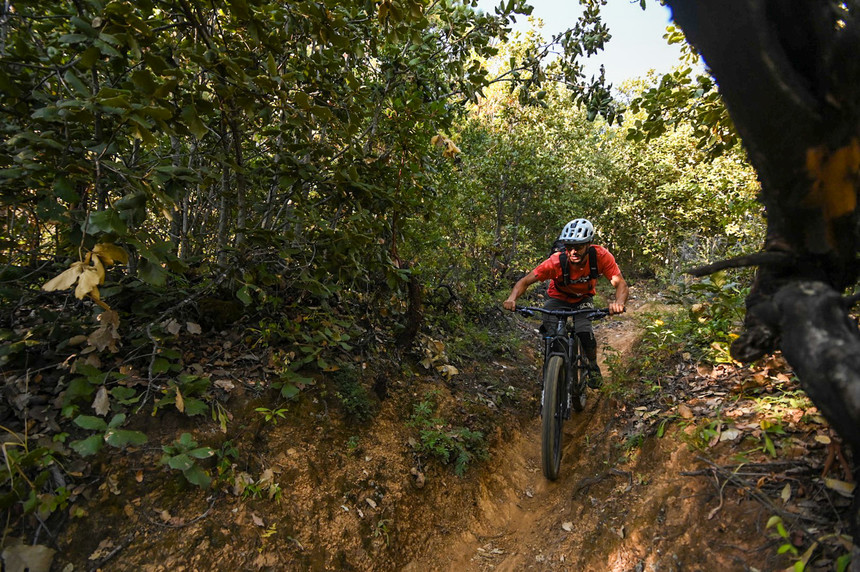 The lush forests and steep loam from the higher elevations give way to brushy fields dotted with towering agave plants, where the pitch finally lets up, and we are treated to a specialty of Oaxacan riding: the ditch life, as Alvaro calls it. Hundreds of years of donkey and foot traffic pack in the dirt in an eternal battle against the rains. When it rains here, it pours (it’s the jungle, after all), and the water seems to be winning that battle, eroding the trail into 10-foot-wide ruts that resemble an amusement park slide. It’s scary at first, but after a few twists and turns, I trust Alvaro’s line and learn to ride high on the side of the ruts like a halfpipe, carrying my speed through each corner and up and over blind features. What a wild ride – and to think a crew of riders comes down here every year and races this stuff blind? I will freely admit it’s among the gnarliest trails I’ve ever ridden, and it unquestionably put a shit-eating grin on my face by the time we were done. 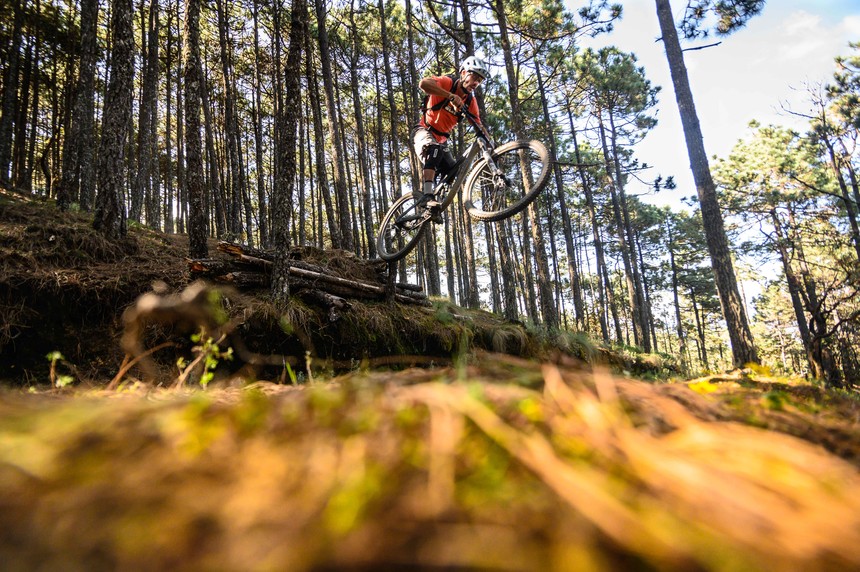 That night, we indulge in traditional Oaxacan fare – Tlayudas and Mezcal. Any self-respecting gringo knows what Mezcal is, but tlayudas are the real reason Oaxacan food is so good. We’re talking an open-face quesadilla on a massive crispy tortilla topped with anything you like – Barbacoa, beans, fresh greens, and delicious tomato salsas. I make a mental note to add this to the recipe list for the kitchen when we’re back home. With the mezcal freely flowing, we chat about the future of riding in a place like this. Alvaro admits he is a bit torn between promoting and growing the community and a fear of destroying it by doing so. Mountain biking is still a fringe sport, particularly in a nation obsessed with much cheaper games like soccer, but it’s gaining traction. 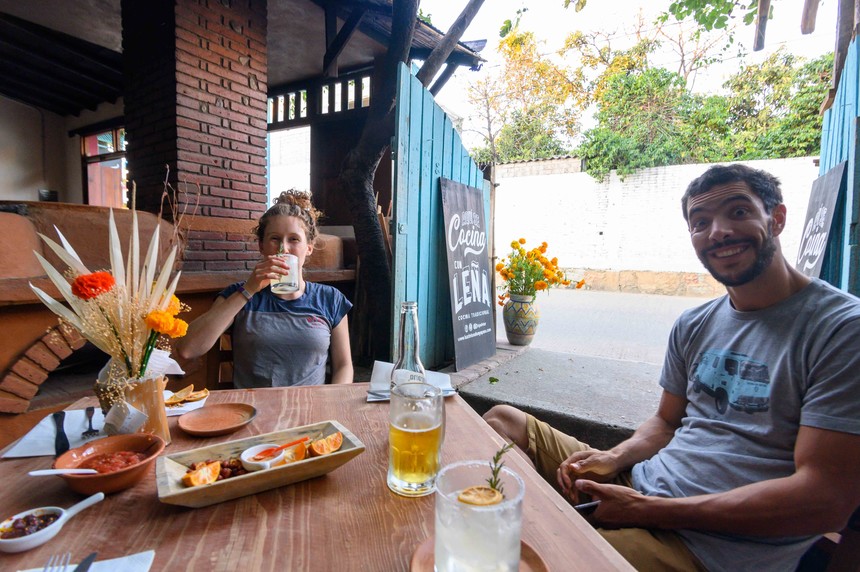 The vast majority of his guiding clients travel internationally or come from far wealthier parts of Mexico – the state of Oaxaca has been and still is incredibly impoverished – and Alvaro is not sure if outside money alone is what will fix the issues here. Sure, a steady income for himself and his crew of friends (fellow guides, drivers, and trailbuilders) is important, but he sees it as his mission to convince the local communities to embrace a sustainable future from within. Alvaro is convinced that mountain biking will be a part of that future, and he wants to do everything he can to cement its place. He’s seen the sport transform communities north of the border like Crested Butte and Moab, and he wants to transfer those lessons learned to the place he likes to ride his bike the most – the ancient trails of Sierra Norte de Oaxaca.

Alvaro and his guiding company Trans Sierra Norte THE RIDE have recently opened a basecamp bed and breakfast in Oaxaca, where they are now hosting guests from all over the world. Check it out at www.transierranortetheride.com. Oh yeah, and when you do go, bring a few extra sets of brake pads - you'll need them.