Is the internet ruining our favorite sports?

Friend or Foe? The Internet Vs. The Backcountry

It’s 2021, so we can all agree that the internet is one of the single greatest things to happen to humankind, right? Well, maybe.

Throughout the past year, we’ve seen the power of the internet when it comes to sharing information in near-real time. Online information is a powerful thing, its influence reaching like tendrils into our world in ways we are only now starting to understand. Of course, politics, a pandemic, and doomscrolling aside, it’s a tool that backcountry skiers and snowboarders have come to rely on more and more in recent years, as a way to further their safety education, check in on conditions, and spread the love of a sport to friends and strangers alike. This year, thanks to COVID-19 and much of the world resorting to remote online work, that web-ification went into hyperdrive - and I’m convinced that’s actually a good thing, but I think it needs to be explored how it’s on us to use the tool appropriately.

I started writing this story on the eve of the new year and was originally going to have it focus on some ways a few intrepid members of the community set out to use the internet as a tool to spread knowledge in new ways. And I’m still going to give those folks credit, namely the American Avalanche Institute and IFMGA guides and Teton locals Mark Smiley and Zahan Billimoria, who recognized the power of an internet connection to usher their decidedly non-plugged-in work into the digital space. Check out AAI's up-to-date online avalanche curriculum, MTN Sense and Samsara Training to see what I’m talking about: it’s awesome stuff and I think that it promises a bright future for our sport. 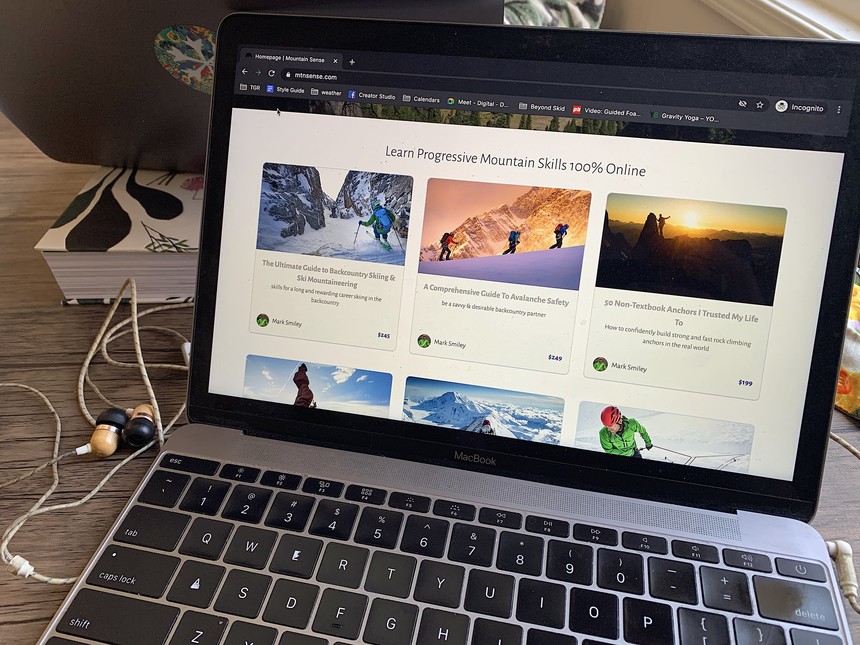 But that’s not going to be the point of this story. Instead, there’s been a lot of discussion lately on responsible use of the internet and social media when it comes to talking about sports like backcountry skiing and snowboarding. The single biggest thing I hear about when it comes to social media and the backcountry is the power of platforms like Instagram and Facebook helping people “discover” their new favorite backcountry zone, and how it might be ruining it all.

Let’s be honest, as much time as we like to think we spend in the mountains, most of us probably spend more time online than we care to admit. In fact, according to a variety of recent studies, the average American spends 24 hours a week on the internet. Us backcountry users are a resourceful bunch, so of course we’ve found all manner of ways to make a decidedly non-digital activity very plugged in.

Ok, I’m all for sharing the stoke with your family and friends and finding some dank beta online, but we all have to admit that our world has a bad case of oversharing, particularly on social media. Is it ruining the mountains, like some claim? Maybe.

Sure, there’s the whole deal with campaigns like “ Tag Responsibly: Keep Jackson Hole Wild” giving our sport an elitist vibe and even going so far as it being a form of racist, sexist, and ableist gatekeeping, as Vasu Sojitra says in a recent social media post, but I think we can step back and analyze it a little deeper.

How does it affect our perception of risk? We’re talking about sports that can very easily take a life (your own or someone else’s), and I strongly believe that these kinds of sports are in fact only for people that can accept, manage, and mitigate that risk properly. Yes, anyone can turn themselves into a person who can handle them, but it takes work, lots of help from others, and a healthy dose of respect to make that happen.

It’s pretty cool when you’re sitting on the couch on a Friday night scrolling through your feed and you see that Joe Schmo sent it big on that line you’ve been eyeing but have no idea how to get to until you keep watching to see they were kind enough to post beta photos of the approach AND the exit! Wow, how awesome! Armed with that information, you’re ready to get up early tomorrow and send it, right? WRONG! Slow down, cowboy.

Just because someone else posted about riding a big line and is so kind as to share how to get there doesn’t mean it’s good to go. Maybe they didn’t share the fact they triggered a wind slab, or that the snow was actually total dogshit and they barely made it down in one piece. Social media is an avenue where we like to make things look better than they were. It also insulates the “storyteller” from criticism. Think about if you were to brag to your friends about the cool thing you skied in person at your socially distanced tailgate sesh in the parking lot, and your friend was like “hey, that seems like a bad idea, why’d you do that?” That’s an uncomfortable but necessary conversation. However, on social media, it’s far too easy to just insulate yourself and delete all the negative comments and shy away from criticism after you just go out and boast about your latest mission.

Because of that, it’s an open invitation for the rest of us to let our guard down when we ingest this information, and it puts undue pressure on our decision-making process. I’ve personally seen that pressure lead to some bad decisions being made.

There’s also the undeniable fact that much of the fun of social media is about “spraying” and giving ourselves a nice little ego boost about something rad we just did – it comes down to how these apps work to gamify literally every aspect of our life! But the problem with that is simple: backcountry riding can be incredibly dangerous, and the lines you and I probably like to ride can just as easily kill us as give us the next best day of our lives – that’s not something to gamify, and it’s on us to recognize the sprayers.

I’m not saying let’s all unfollow and delete the accounts of anyone who likes to share their mountain exploits on the internet. I just think it makes a lot of sense to be extra analytical about it.

Be critical. Be smart. Be safe. If you’re letting information like that influence your decision making, make sure you ask the source of that information the right questions in order to get the whole picture. Ask about that party’s decision making, and maybe think twice about whether they were really really smart, or just were lucky and got away with toeing the line.

That leads me into a second downside, and another one we talk a lot about here at TGR. That same information spreading power also comes with a very easy way to give a platform for unwanted trolling, shaming, and hateful speech. When you post something online, you implicitly open yourself up the haters, and that’s led to some pretty undesirable “discussions,” just like what’s going on around geotagging right now. Whether it’s a forum thread, a social media post, or an online article like this one, there will be a response. Can we all just agree that those responses should be respectful, and that any discussion that arises remain constructive, and doesn’t devolve into chaos? Let’s use this amazingly powerful tool in a way to help others understand how to be better backcountry users. It’s in our own best interest! 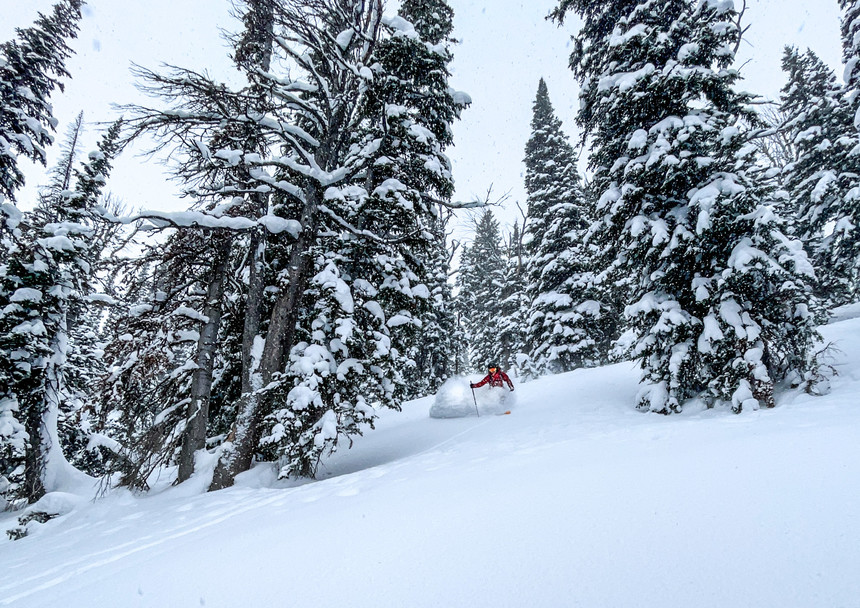 So with that aside, I can finally get into the story I originally wanted to write: the power of the internet as a community-building and educational tool that might actually be the best thing to ever happen to our world. First, let’s start with the recent influx of web-based training, avalanche and mountain skills courses. Just here in the Tetons alone, I’m talking about the likes of Mark Smiley’s MTN Sense avalanche and ski mountaineering courses, and Zahan Billimoria’s Samsara Bodyweight Training series. Both of these were actually released online before COVID-19 changed the world. Talk about foresight, and maybe a little serendipity.

Mark and Zahan were kind enough to let me check out their programs, and I must say I’m impressed. Things like avalanche training, ski mountaineering skills, and fitness for high-output activity like mountain sports have always been the kind of thing that seem pretty hard to teach, but to be honest, the way the topics are approached in these classes is incredibly engaging, nuanced, and lets the user learn a complicated topic in bite size pieces on their own time. I feel like I would have learned more tangibly useful skills from a few hours of these classes than I would have when taking my Avy 1. Sure, in the case of Mark’s avalanche class, it’s not a replacement for a formal Level 1 class, but it’s a great way for us laypeople to gain insight into the knowledge and skill base of a master of the mountains. Read more about the MTN Sense classes and the Samsara Training programs.

Finally, social media CAN actually be an incredibly useful tool. It does give us the ability to share nearly real-time information about conditions in hard-to-reach places and allows us to communicate in ways we never were able to before. Many avalanche forecasting centers, like the CAIC, Utah Avalanche Center, and our local Bridger Teton forecasters will take to social media to issue pertinent snowpack information, share conditions reports, and give you timely advice on decision making!

That’s the power I like to see, I just beg you, please see this tool as any other piece of your kit. Don’t just use it, use it smartly.