Writing from the backseat of our tightly packed van! We are somewhere in southern Nicaragua mid 14-hour drive to our next spot in Costa Rica. The chemical makeup of the air in the van is swollen from the humidity and stale riding gear. Dense, moist molecules that we have to swim through to move. This is day five. To be honest, after three days of hiking and baking on a volcano with the same eight guys it is hard to decipher who or what a smell is. Thankfully we have a rum sponsor!

There seems to be a general sense of relief and accomplishment this time around. A synchronized exhale after a four month wait. Back in November, on our first trip down here we weren’t able to push to the top of Momotombo like we wanted to. We didn’t have proper respirators to handle the sulfur smoke. And after our radios proved worthless, the communication between the crew on the ground and the crew in the heli was limited to me waving my arms and feverishly slinging my extensive library of colorful words into the air. At this same time, the guys in the heli were trying to not shit their pants while being shaken like a piggy bank by the violent air coming around Momotombo.

From the planning stages of this trip we knew the line we wanted down the cascading red and black cinder field. It was an open-faced big mountain line, and we planned the whole trip around one aerial photo of the guys laying over big aggressive high-speed turns. A photo we weren’t able to get.

Right before we parted ways in Houston, Nico said “I have been riding bikes for 32 years, I have seen so many places and ridden so many parks. Most of the time we are restricted to trail. I feel like a lot of us look at skiers and snowboards and how they ride mountains, so open faces are the dream. It’s a new way to ride our bikes. New terrain, new creativity.” 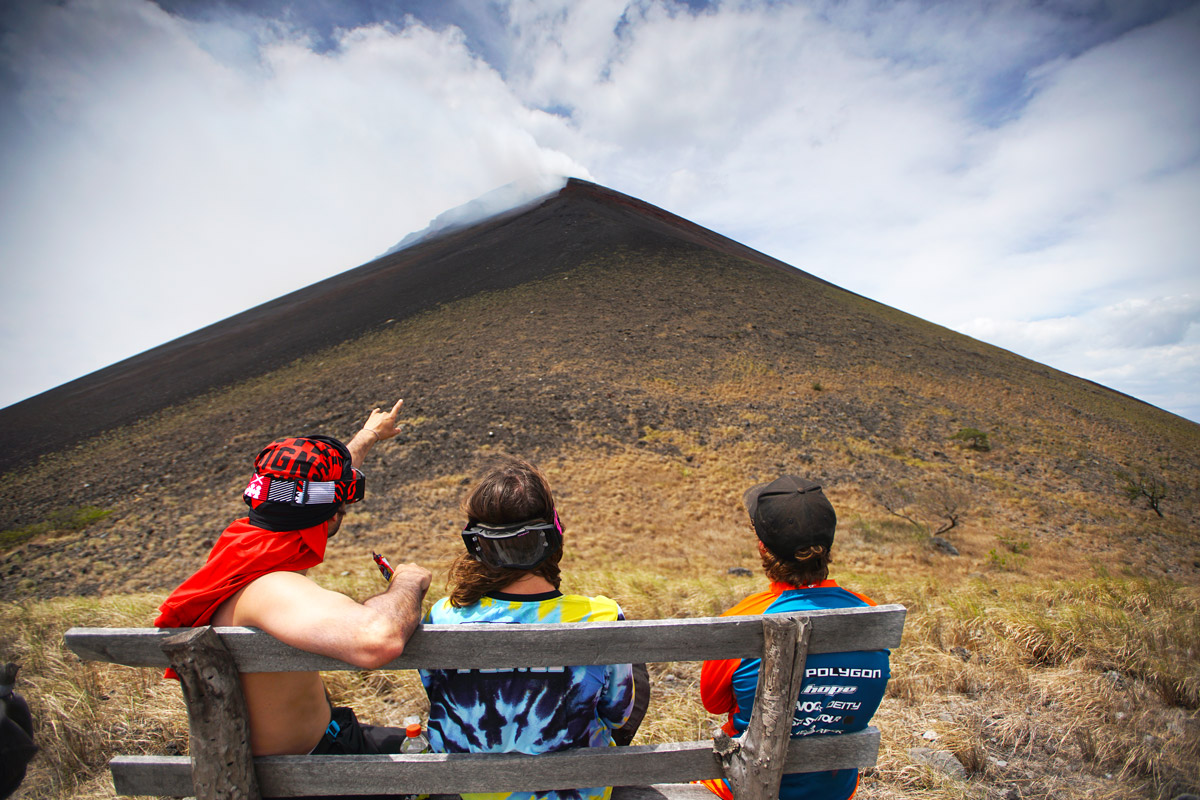 Nicaragua is amazing. You will never find a more warm and giving people. People that have now welcomed our traveling circus with open arms twice. Our friends at Flor de Caña have become an extended family at this point. They helped us find a house on the beach to stay at in a small surf town called Las Peñitas.

Not the worst situation…

We came back with a focus on Momotombo, giving it the respect it deserved. We planned for four days on the mountain; one to scout, two to prep the line, and one to film. Bulletproof…ish. Here is the thing about this kind of work, no matter where you go in the world, governments work at the similar torturous pace. Fun, it seems, is not everyone’s priority. So, we arrived, the same juvenile eight from a short four months before, to the same gate and the same guards at the end of the same dirt road. It was Sunday, and they had no idea we were coming. No amount of charm was going to open that gate.

Eventually, a phone rang, got picked up and words were spoken, so once again the gates parted and we were able to get on with it. 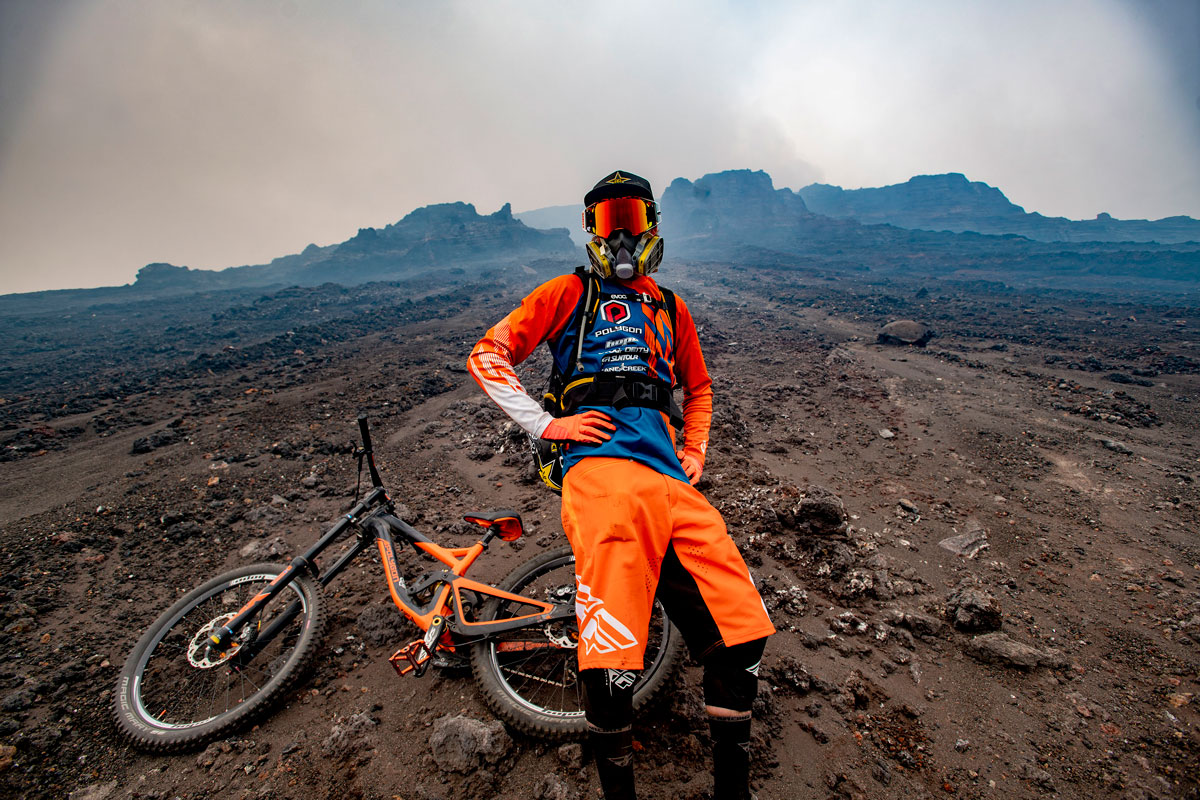 On this trip, we have most of the original crew. Kurt is back and healthy, Kyle is picking napkin colors for his wedding, and Nico made his way back from Europe this time without an extended stay in Houston. The first trip didn’t go to their plan either, but the follow through on a second trip shines a light on how they got to the elevated position in mountain biking that they currently sit. They each have a work ethic and quality control to anything they put their name on.

Behind the cameras we have the same devotion. There wasn’t a person on this trip that didn’t sweat and bleed to see it through. The steep faces of loose rock would cause us to lose three-quarters of every step, and most concerning was the smoke coming out of the footprints we left behind. We also had to put some work in, mid mountain we had to clear 100 yards of lava rocks, farther down we hacked brush, everyone went all in, it didn’t matter if they were running a camera or writing the music for the video. We spent our days baking on a volcanic frying pan. At night, we would retreat back to the beach and swim in the warm ocean and cold mojitos. 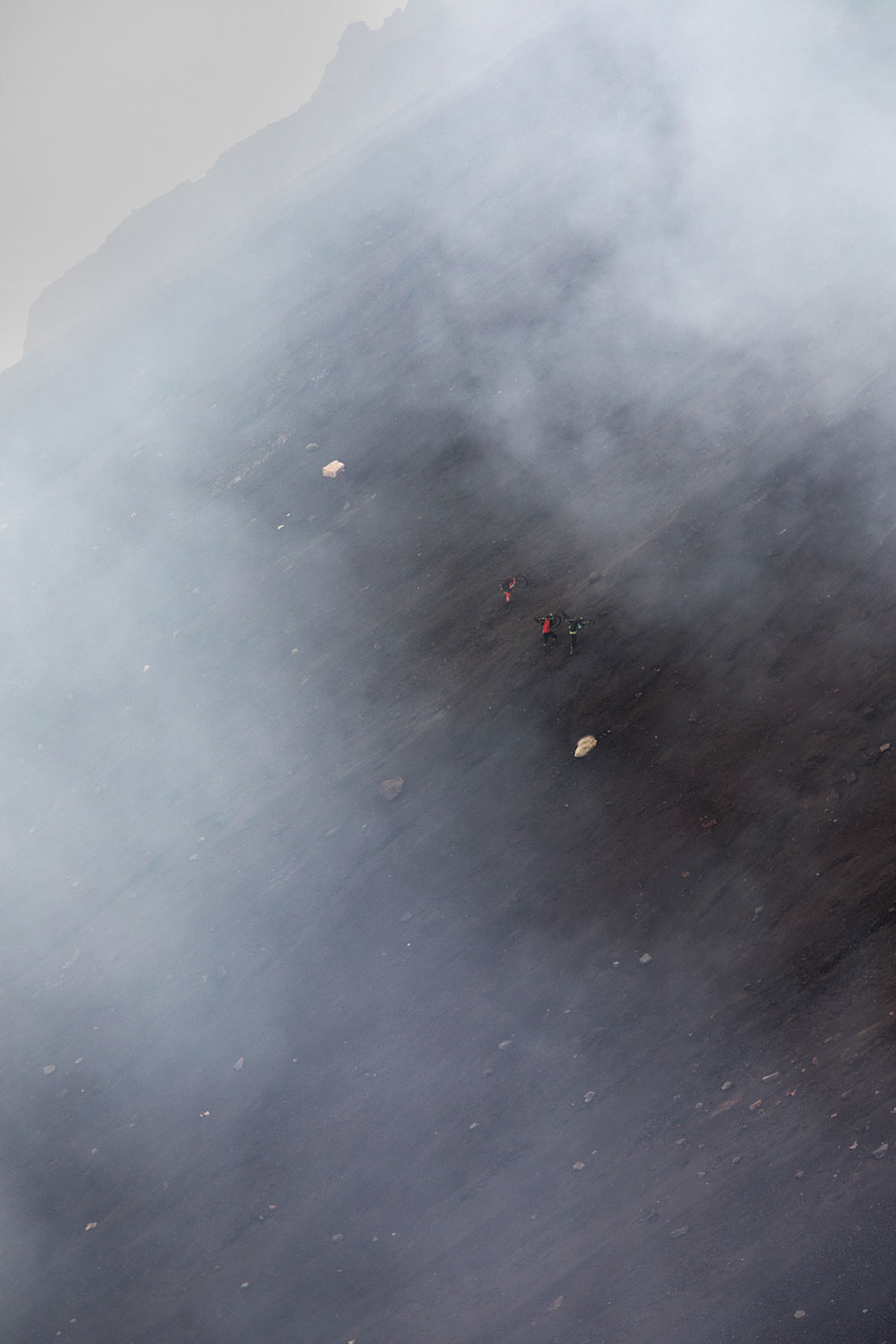 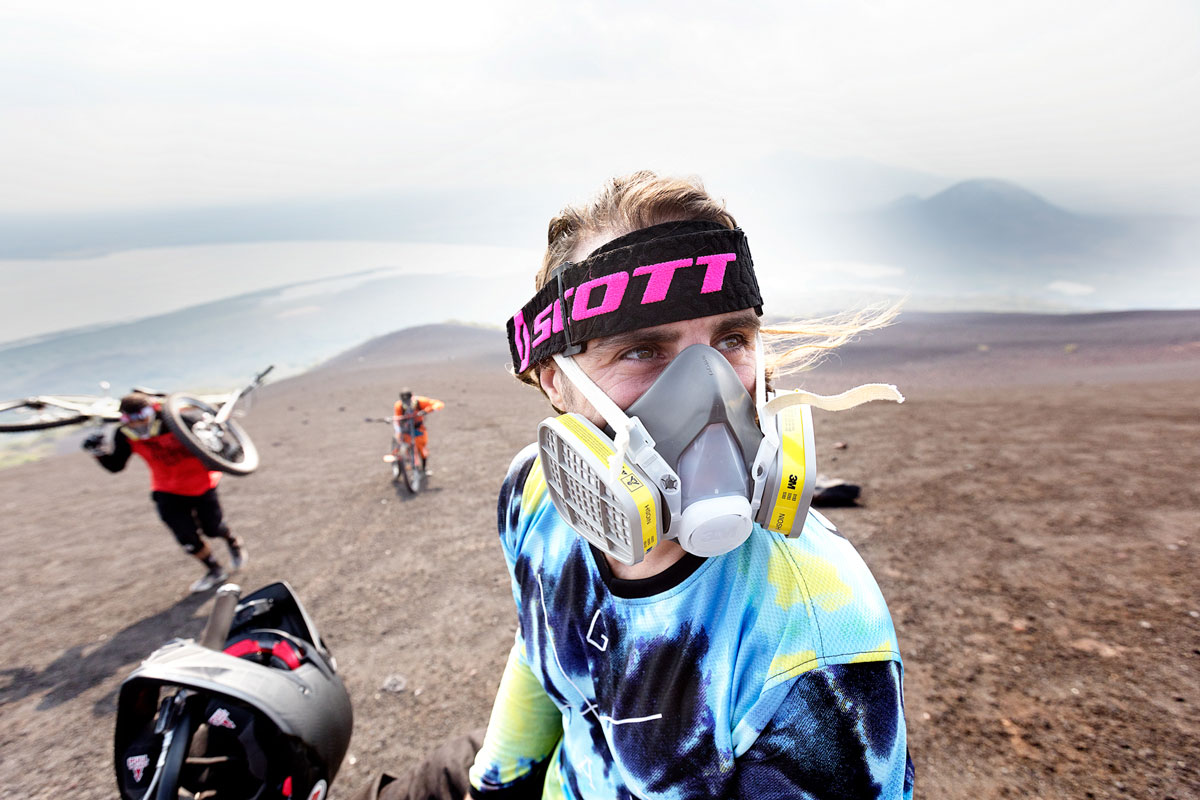 The day came to see if Momotombo was going to cooperate with us. It took the guys about 6 hours to push to the ridge just below the summit. Brian, the photographer, left to meet up with the helicopter pilot. The rest of us sprinkled ourselves around the mountain and had a several hours to ourselves to practice Spanish.

The higher KJ, Kurt and Nico went on the mountain, the less visibility they had from the smoke and the more wind they had to contend with. It wasn’t going to be enough to shut them down from riding but immediately brought back flashbacks of the trip before and the heli flying into the sunset without a single frame shot.

The guys had been on the summit for about an hour when over the radios, as smooth as chowdah, our New England photographers voice came in. The helicopter was 5 miles out and we already had clear communication, things were looking up. The helicopter arrived, and after a few passes Brian relayed that the smoke was so thick that he was having trouble spotting the trio on the summit. Shit.

A few more passes and he started to catch sight of them with consistency. The wind was strong enough that the heli had to keep forward airspeed so it would come by the face for a pass, turn and clear the wind then come in for another. Each time Brian would have to reorient himself. 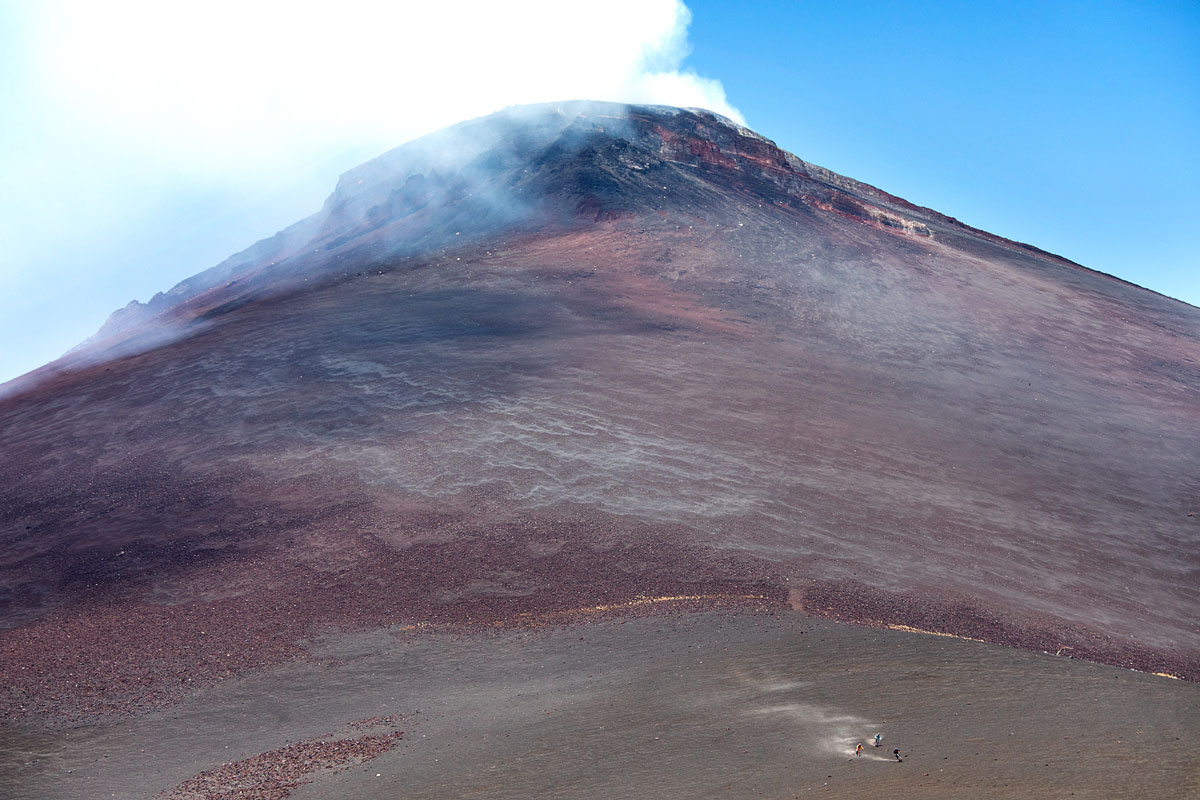 On the final pass, Kurt shouted a countdown from 10 into his radio. It took six months of planning, four months of stewing over that one shot, and eight days of preparation on site. We went all in, an attempt to get one photo during a top to bottom line on this Nicaraguan volcano.

Brian admitted later “I still thought we were risking it having me shooting from the heli with how thick the smoke was but we were going for something new so we went all in, so if shit hit the fan it hit the fan. If we didn’t try we weren’t going to get that shot anyway.” 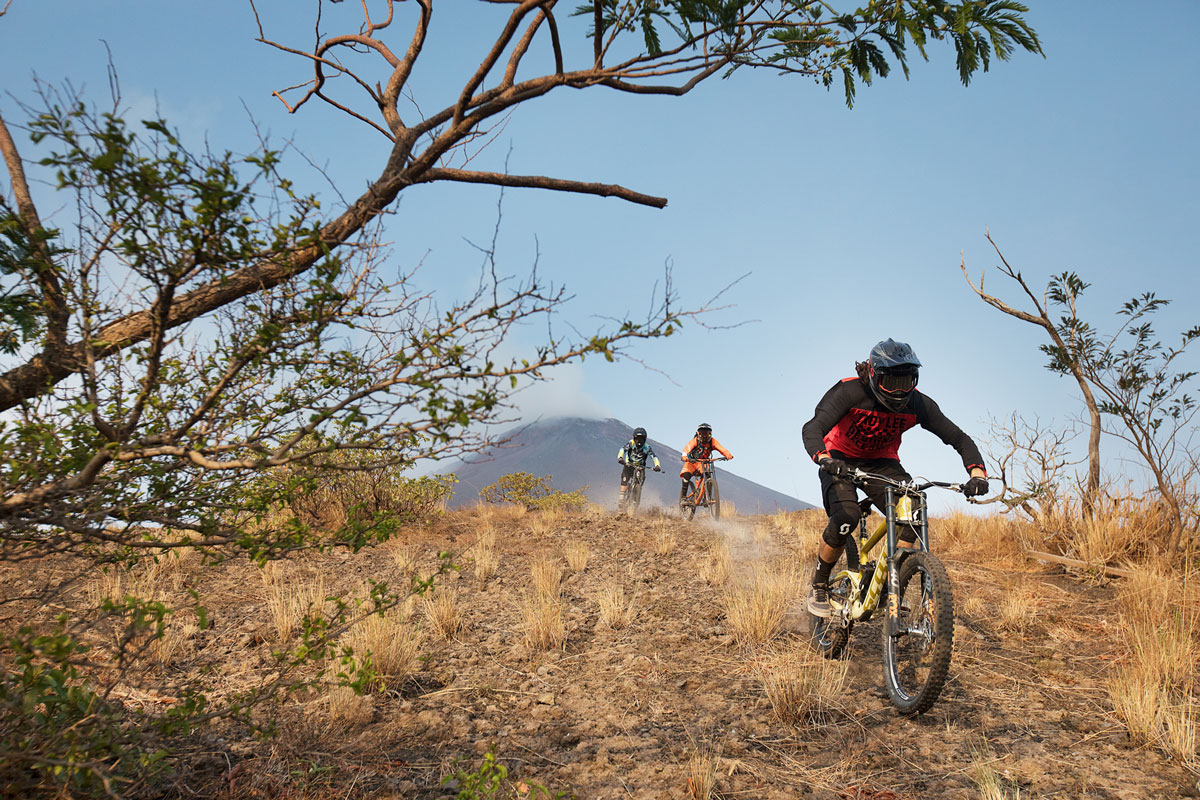 The helicopter pilot was the same from our first trip, he battled the sulfur and the wind so Brian could guess where the guys would appear from the smoke. Through every bounce, bump and drop, they were treated to a soundtrack of screams, yelps and whimpers from our local chaperone, Henry, who was on his first helicopter ride ever.

Brian recounted, “The shutter was rolling and when I finally saw Kurt in his bright orange kit I knew I was setup to get a shot. We definitely got lucky with the smoke.”

Well that’s about all I have for now. Hopefully our luck continues.