It’s been 20 months since the first Red Bull Formation, and the thing about 2021’s event that stood out to everyone the most was the venue. It felt massive. The spines were much longer in comparison to the 2019 site, and there were more ridgelines to choose from. Another bonus aspect to this location was that it hosted Red Bull Rampage from 2008-2013, meaning it had all kinds of old features and hits that could be ridden after a little bit of revamping. Rather than be intimidated by the bigger and more challenging terrain, the eight athletes embraced it. Plus, the immersive arena gave them the freedom to pick and choose lines that played to their strengths. As a result, the athletes spread out across the mountain. Red Bull Formation spans over a week, and the riders have a total of three days to build their unique line. Following the dig session is a rest day, and then it transitions into the riding period. The athletes then have three days to tick off and work through their creations with the ultimate goal of completing a top to bottom descent. Here’s what stood out to us about the athlete’s lines. 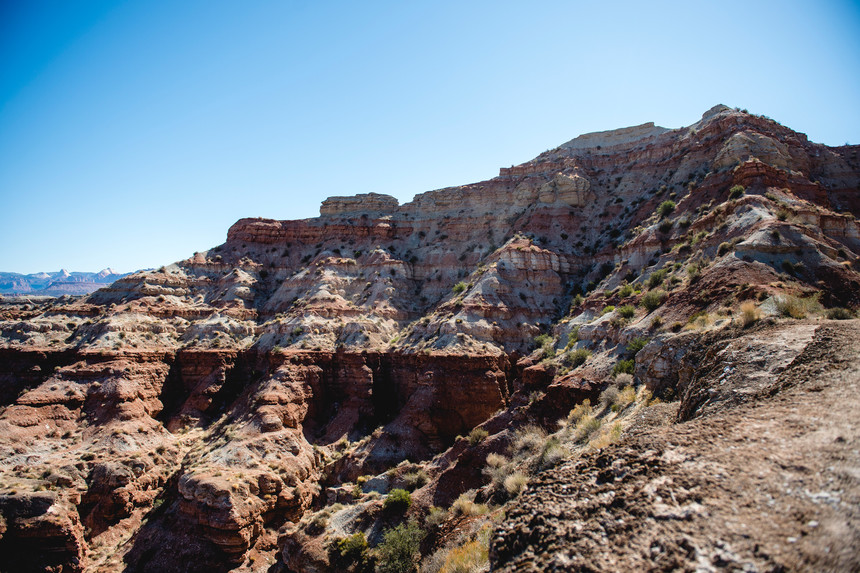 The 2021 Red Bull Formation venue presented the riders with plenty of opportunities to push themselves. Re Wikstrom photo. 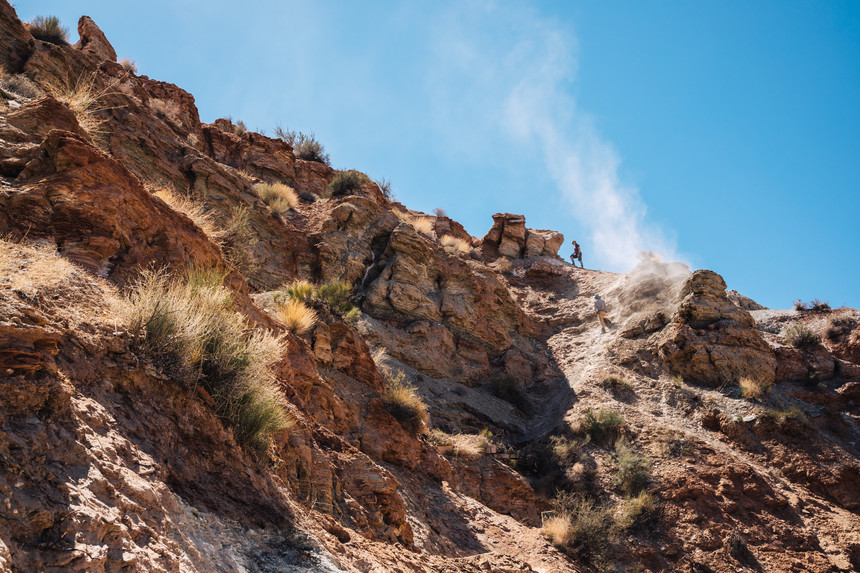 Hannah Bergemann at work shaping the exit of "The Ovary" Katie Lozancich photo.

Hannah Bergemann, Casey Brown, and Samantha Soriano gravitated towards the top of the mountain, with their eyes set on a scree field that funneled into a cluster of rocks they nicknamed “The Ovary”. The Ovary, like the organ, had a small opening that fed riders into a momentary free fall. When gravity turned on again, they were riding into a loose, surfy chute nicknamed "The Fallopian Tube." Undeniably, this crew won a gold star for creativity when it came to naming their features. It was a committing entrance with zero room for error that put Brown, Bergemann, and Soriano’s technical skills, gleaned from years of high caliber racing, and bike handling to the test. From here the athlete’s lines diverged, with a handful of options for the way down. A few of the connecting features worth mentioning were the “Plastic Bag drop” which was a hefty blind drop resurrected from the OG Rampage days and Bergemann’s first double drop. The double drop sent Bergemann down into a steep gully, which connected with a jump that would take her back to the ridge. All three riders finished their line with a big double drop. 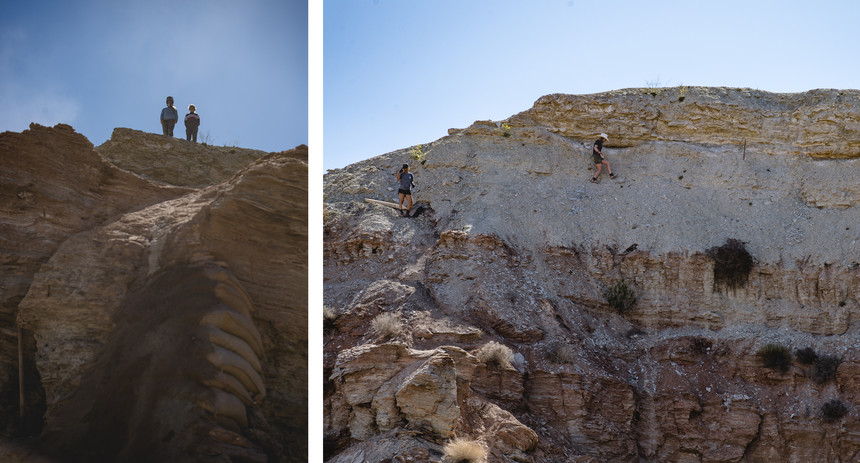 Left: Casey and Hannah gaze down at "The Ovary." Right: Casey Brown demonstrates her mountain goat skills as she traverses above "The Ovary". Re Wikstrom photos. 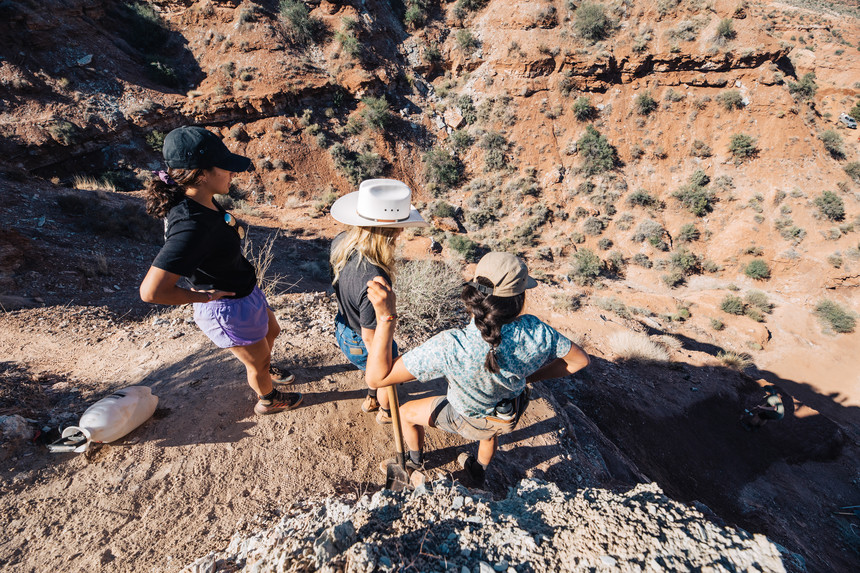 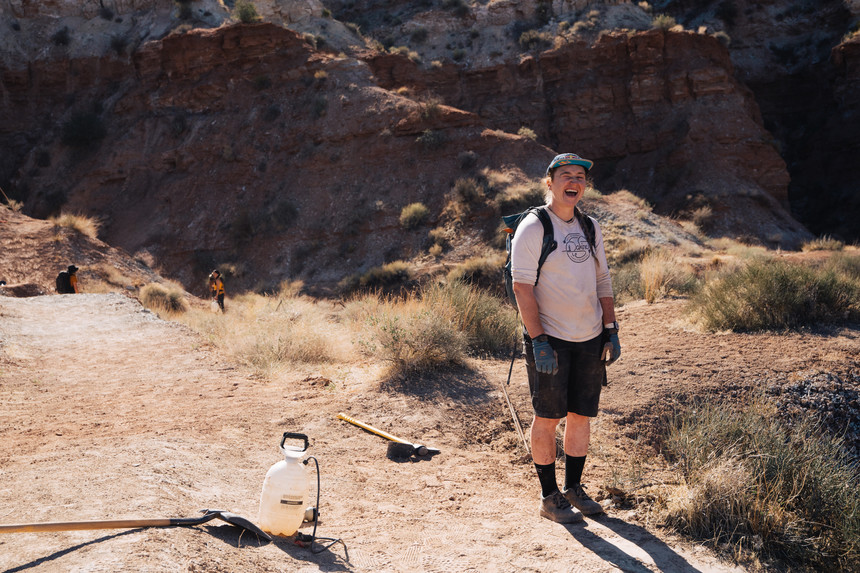 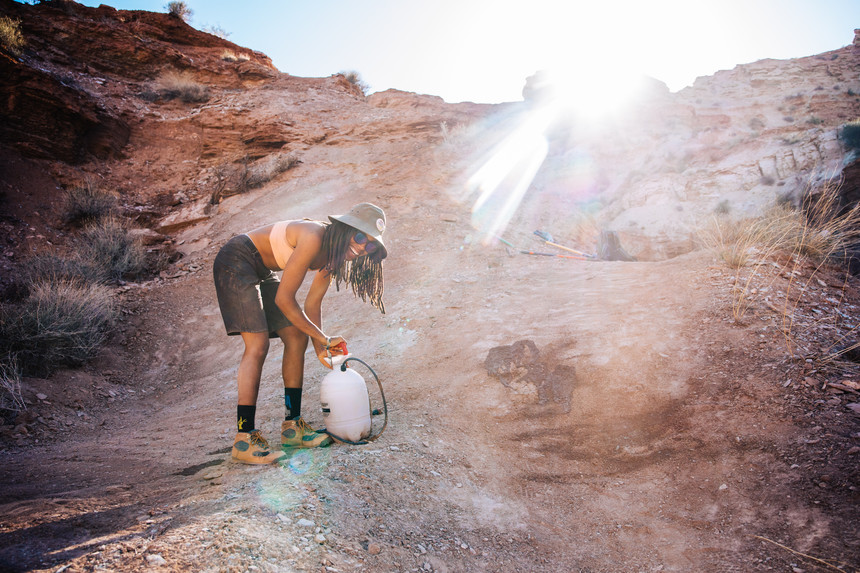 Brooklyn Bell keeps herself busy with watering the many lips and landings on the line. Water is a precious commodity at Formation, as it helps add the finishing touches to all the builds. Katie Lozancich photo. 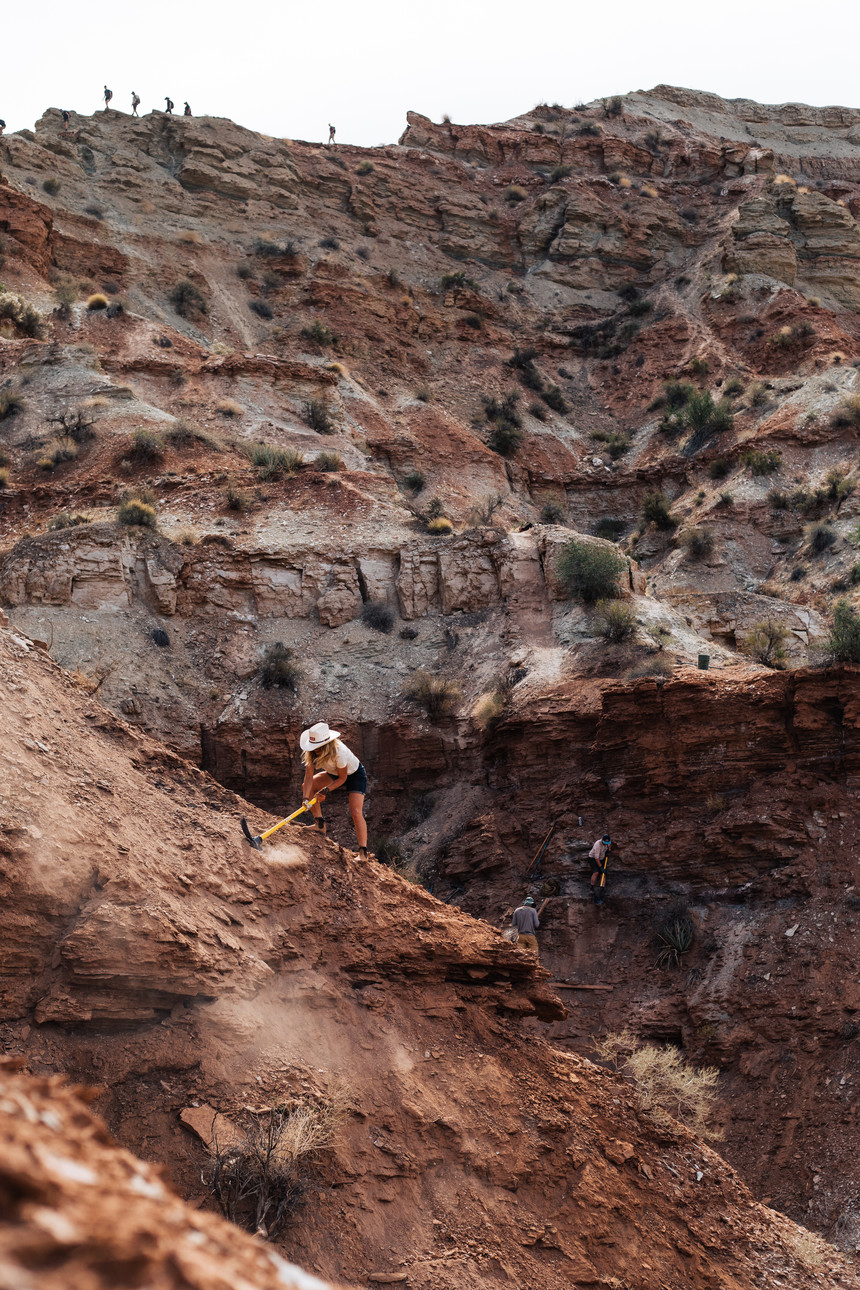 Casey Brown is no stranger to a pickaxe. Katie Lozancich photo. 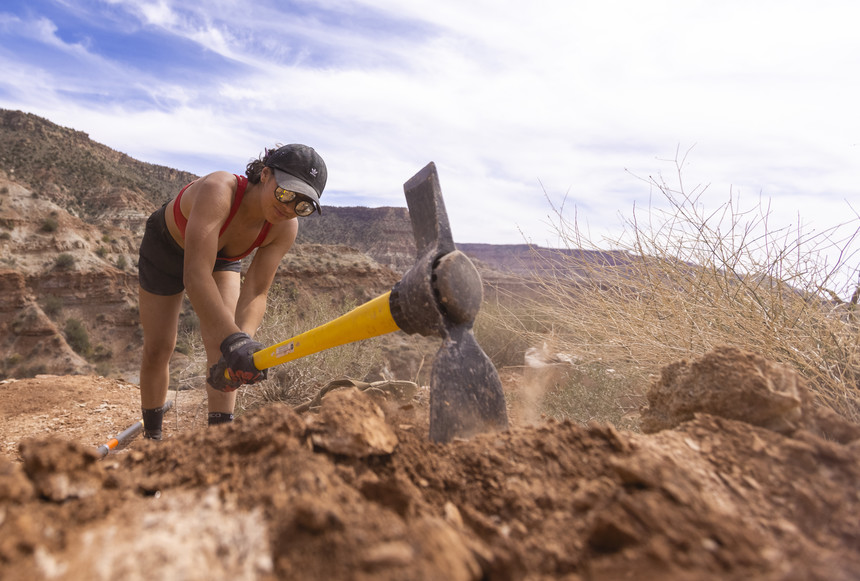 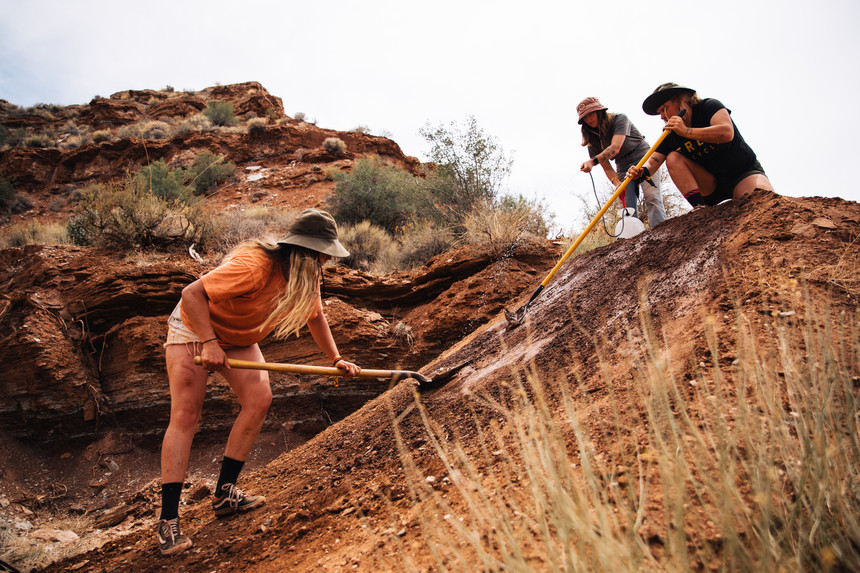 Down below is where you’d find the Kiwis Vinny Armstrong and Jess Blewitt. They spent most of their time and energy shaping the many jumps and hips at the bottom of the mountain. Both riders are fond of being in the air—and it shows. They know how to send it 90 degrees, and have all kinds of tricks in their toolbox. However, that’s not to say that Armstrong and Blewitt were only at Formation to dial in their jumping skills. The interesting thing about the event is that the athletes don’t own their lines. Unlike Red Bull Rampage where riders claim ownership over their build, Armstrong can ride Brown’s line, and vice versa. This falls in line with the core principles of Formation, which hopes to inspire collaboration between all the riders. It forced the athletes to collaborate and push each other by eliminating territory and competition, which ultimately moved women’s freeride forward in many instances throughout the week. As a result, Armstrong and Blewitt were excited to sample Brown/Bergemann/Soriano’s line and gain more confidence in steep, exposed terrain. 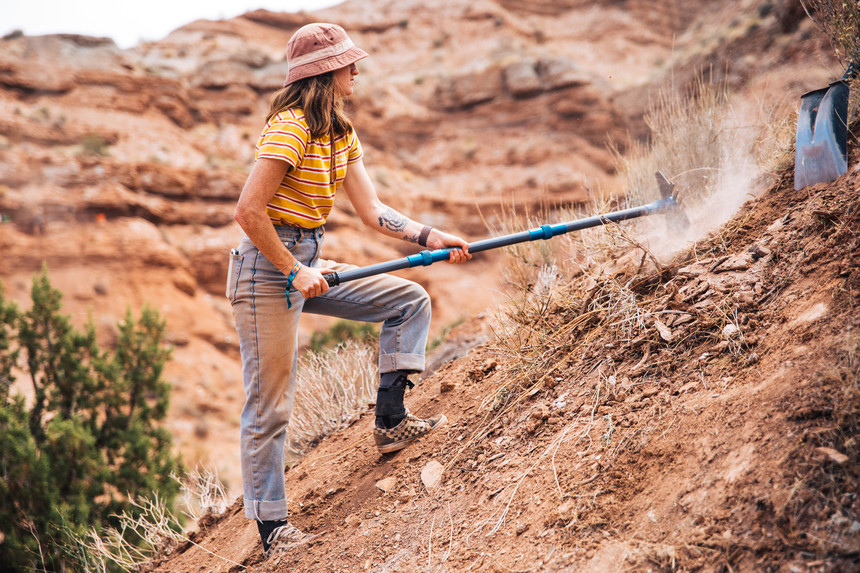 There was no shortage of fun and shenanigans from these two. Katie Lozancich photo. 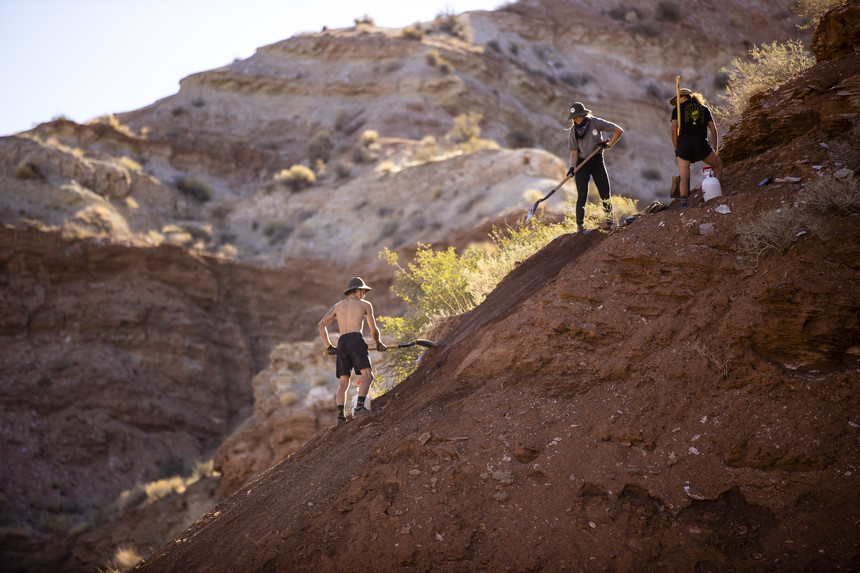 Lookers right is where you’d find Vaea Verbeeck and Camino Nogueria’s line. It was a quintessential Utah freeride approach that danced its way down the mountain, over a handful of drops, while navigating constant exposure. A third of the way down is where Verbeeck and Nogueria’s lines split and the riding got especially spicy. Nogueria favored the far looker’s right side, opting to build a track that funneled down into a steep chute, onto a catch berm, and over a couple of small hits. And just when you thought she was finished, Nogueria rounded out the whole enchilada by ending with a 50-foot gap jump. Verbeeck, on the other hand, was especially drawn to a startling double drop feature, and it's easy to see why. Straight on, it looks like a massive, weathered set of rock stairs. It also was aptly located next to a trick jump, meaning that Verbeeck could end her ride with a bang by showing off the snazzy tuck no-hander she’s been working on for this event. Talk about one grand finale. 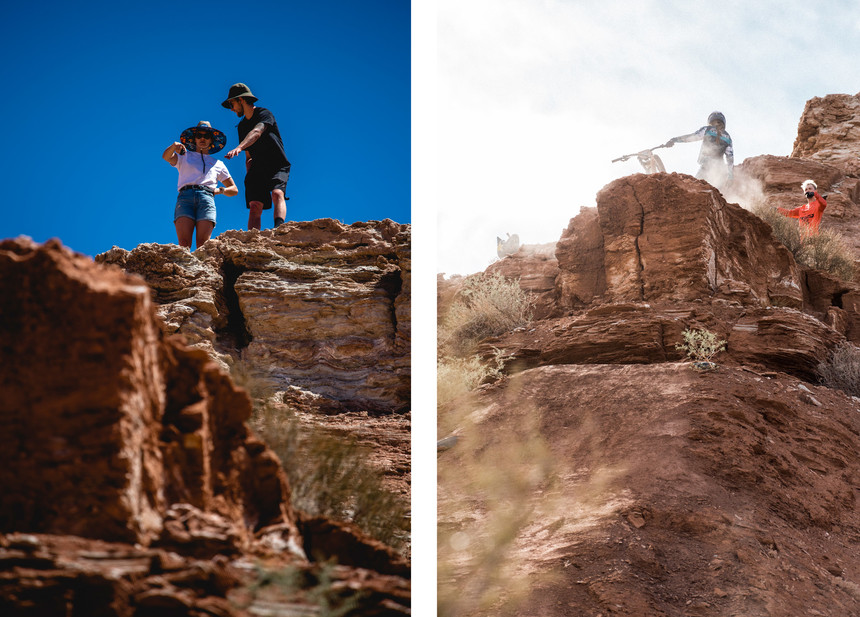 Left: Vaea making sense of her double drop feature. Re Wikstrom photo. Right: Vaea dialing in small changes to the feature with the help of Ethan Nell and DJ Brandt. Katie Lozancich photo. 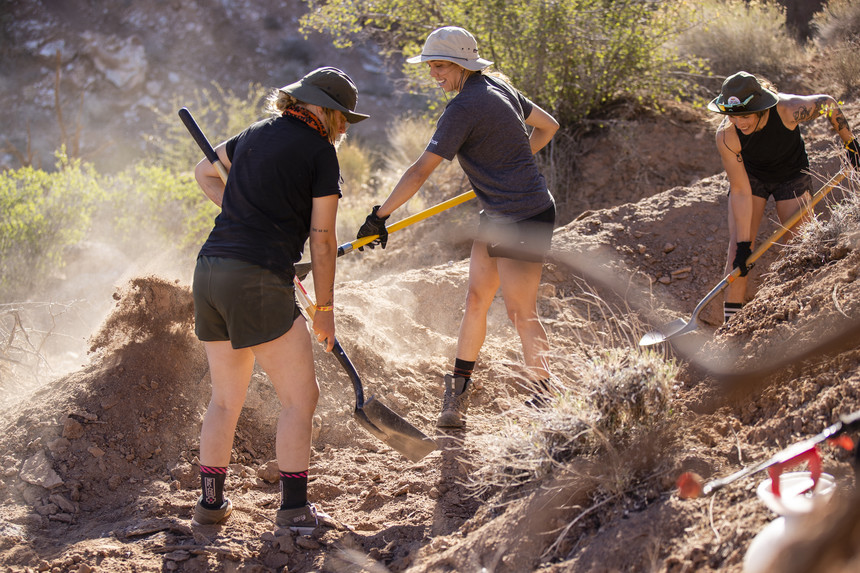 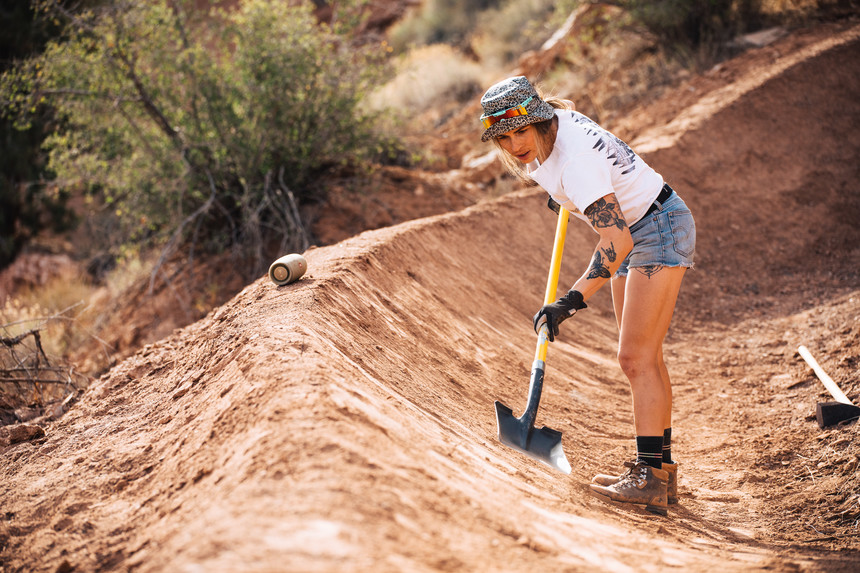 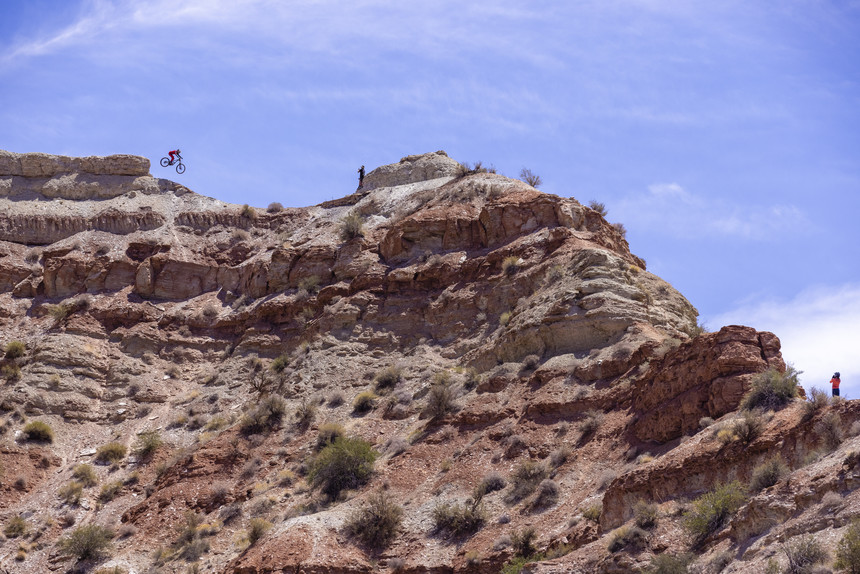 Cami sending it off the top of her and Vaea's line. Catherine Aeppel photo.

Chelsea Kimball took on the bold goal of creating her own unique feature. Katie Lozancich photo.

Lastly, Chelsea Kimball’s line took the most unconventional approach to her Red Bull Formation build. Having ridden features built by other riders her entire career, Kimball was excited to create something from scratch. However, building a completely new feature at Red Bull Formation is no easy feat. Three days is a tight time frame to build a top to bottom line with existing features as it is, so adding a whole feature that needs to be carved, packed, and watered means there’s little time for rest. 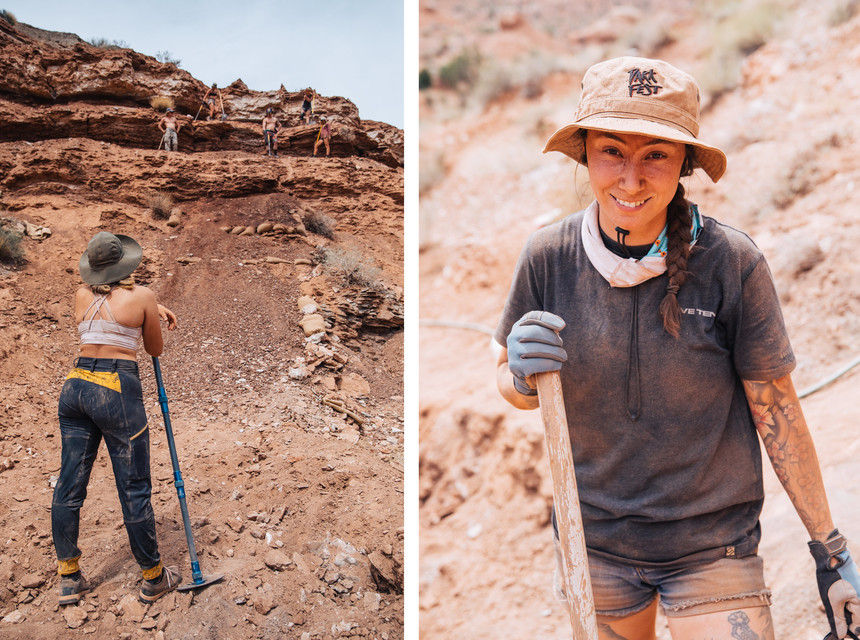 Left: Digger Kaia Jensen looks up at Chelsea's drop as it starts to take shape. Right: Digger CJ Selig is coated in a healthy layer of dust and dirt from working on Chelsea's drop. Katie Lozancich photo. 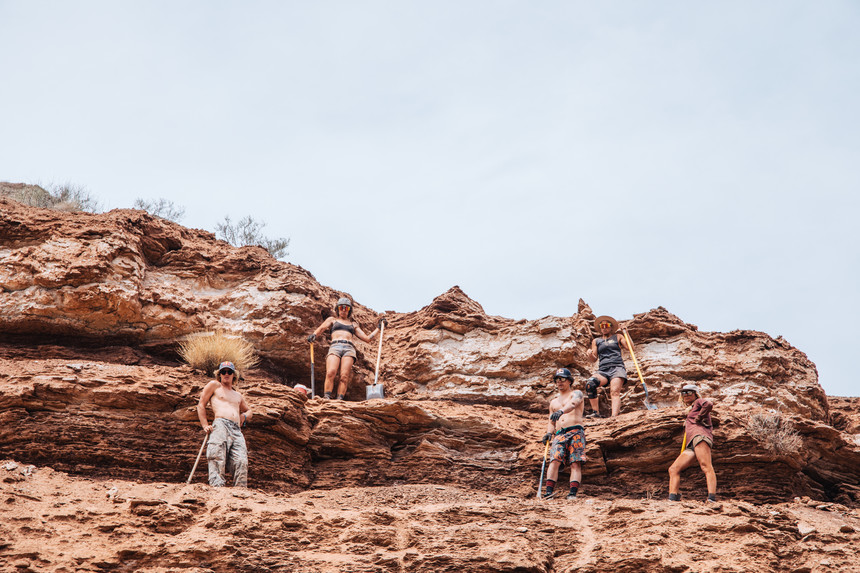 Leading up to the event, Kimball tore her meniscus. Her doctor, however, still gave her the green light to ride—as long as she didn’t straighten her leg. That meant no tricks for Kimball, but she could still ride drops. Determined to push herself, Kimball opted for this custom drop, which soared over shelves of jagged Utah rock. The entire feature took a lot of chipping, digging, and too many jugs of water hauled up the ridgeline to count to complete. But thanks to one all-star dig crew, Kimball's vision came to life. If her drop wasn’t already daunting enough, Kimball had it link up to a canyon gap, making for one of the most creative lines at the event. 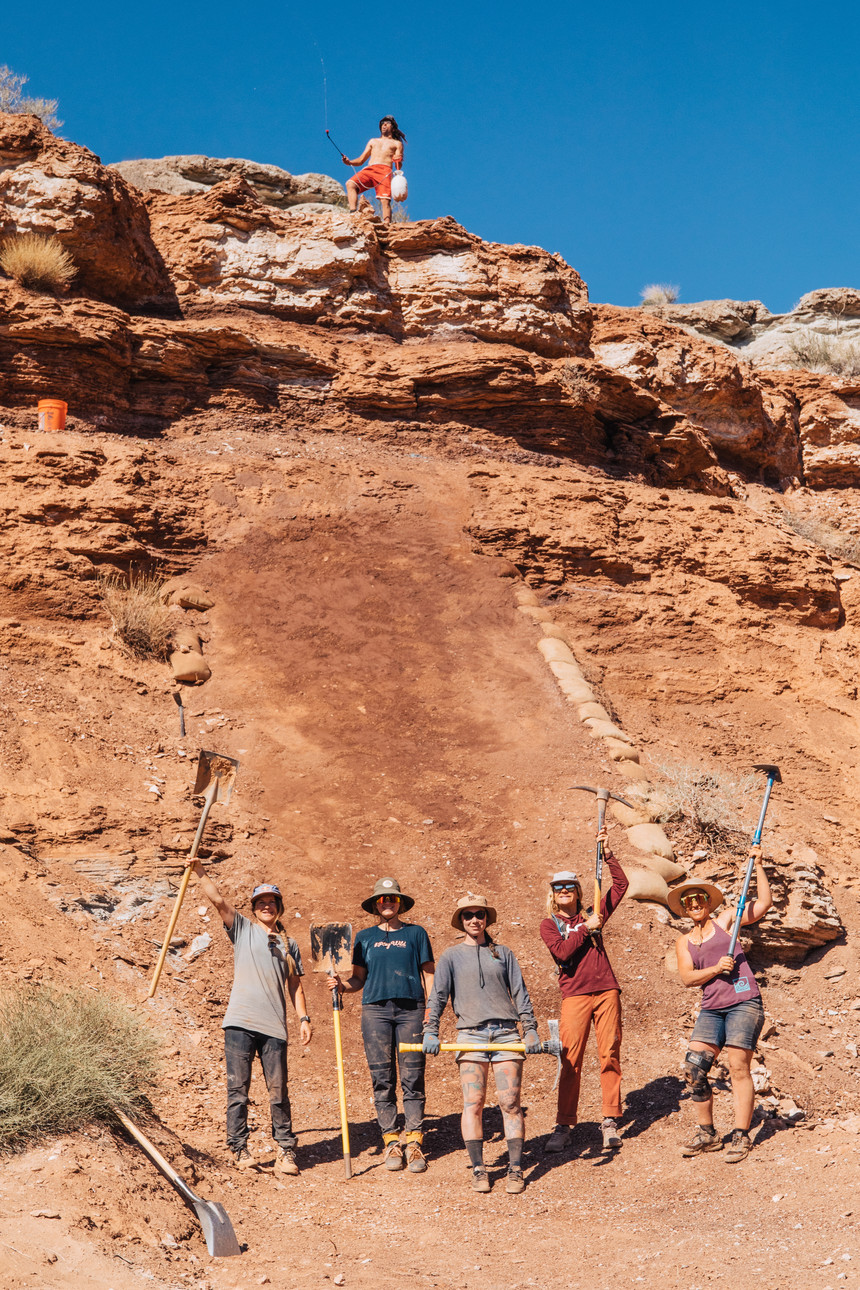 Stay tuned for part two of the Red Bull Formation Photo Saga, where we’ll dive into our favorite moments and sends from the week.