Her email said she’d come out for a visit. That wasn’t quite what I expected when I reached out to Micayla Gatto to ride with and photograph her here in Jackson, Wyoming.

The whole idea was a complete long shot. We hardly knew each other, first crossing paths by chance in a karaoke bar in Bellingham, Washington. After a riveting rendition of Baby Got Back, I felt that we had built enough of a rapport for me to invite a complete stranger to come to visit. A year later, she decided to take me up on my offer. There was just one concern before fully committing: “Can Sage come?” That’s her dog, who’s the chillest black lab I’ve ever met.

Before we knew it, Micayla, Sage, and two mountain bikes were loaded into her RAV4 for a cross-country road trip through the Rocky Mountain West. Jackson was only one of her many pit stops, and while she was here, we planned to ride, paint, and explore what the Tetons had to offer. Micayla hails from Vancouver’s North Shore, a hotbed for freeride mountain biking. She’s used biking as a means to travel all throughout the globe, and I had a feeling that Jackson would pique her interest. Micayla not only puts down beautiful lines with her mountain bike but with her paintbrush as well.

Jackson isn’t just about rad mountain bike trails, the community also shares a deep appreciation for the arts.The landscape has captured the imagination of many. Ansel Adams once navigated bumpy dirt roads and bushwhacked his way to an outcrop overlooking the Snake River. There, he plopped down his tripod and framed up one of his most beloved photos of all time: The Tetons and The Snake River. He’s just one of many artists who couldn’t shake Jackson’s allure. Now, this tiny community tucked away in the mountains boasts one of the most vibrant art scenes in the nation. As an artist myself, I can’t think of a better place to be based. It always takes my breath away when the morning light paints the mountains with vibrant hues. Or how the landscape’s color palette changes each season. In the winter things have a blue and silver glow. Neon green in the spring. Red, pink, and purples from wildflower blooms in the summer. And of course, there are the shimmering golds from the aspen leaves that dot the hillside during our fleeting but oh so beautiful fall.

You can’t help but create with all this natural beauty to be inspired by.

Given Micayla’s unique athlete-artist duality, I was curious about what she would take away from this special space. And more importantly, what kind of artwork would it inspire her to create? 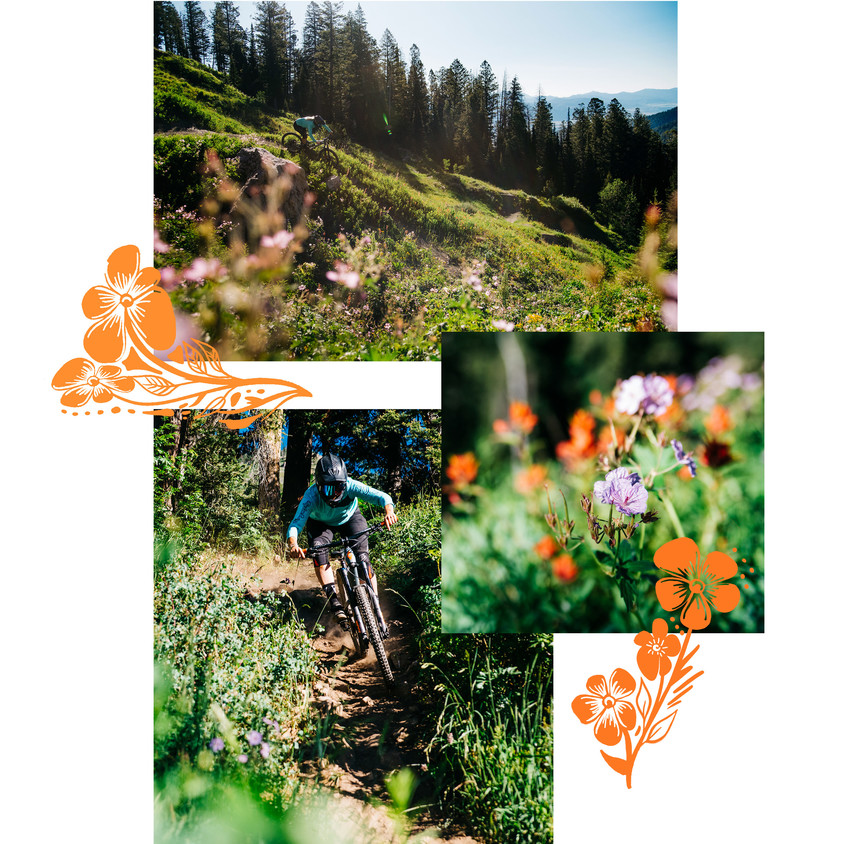 Given it was Micayla’s first-ever visit to the area, I had to bring her to a Jackson classic: Teton Pass. It’s like a full-on bike park, except there are no chairlifts. You either shuttle or catch a ride with a kind commuter. Or if you’re an endur-bro you can climb the 2,000 feet up to the top. The apres scene is simple: delicious tacos and beers at the Stagecoach bar—what more do you need? Located in the Bridger-Teton National Forest (BTNF), Teton Pass is heralded as one of the first user-specific mountain bike trail systems in the country. Thanks to the collaboration between the BTNF, Friends of Pathways, and Teton Freedom Riders, the Jackson community is able to enjoy a variety of trails. It’s been such a success that other communities have reached out to local officials for insight on how to replicate the model. 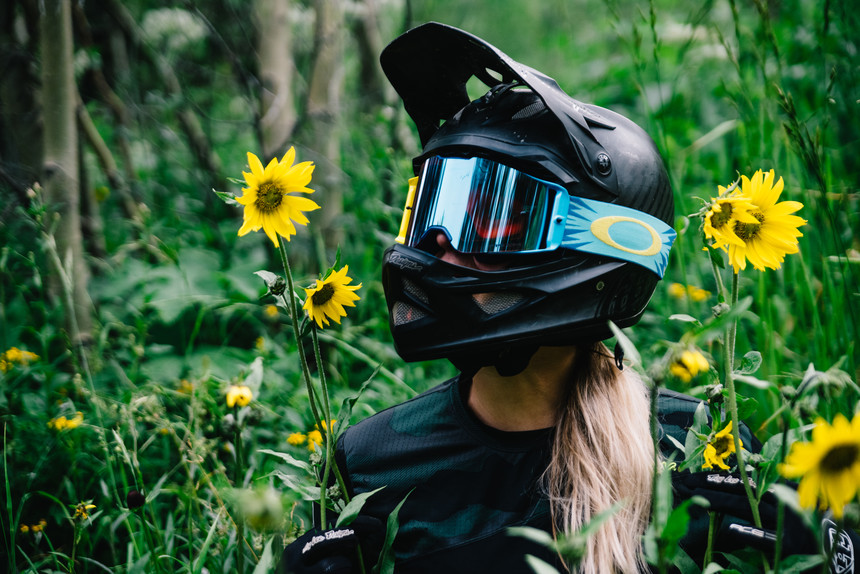 At the top, we pass by a mob of tourists congregating at the summit. While they gawk at the expansive view of the valley, we scurry into the forest. We weave through lush foliage, and thankfully don’t have to dodge any moose or black bears as we descend nearly 2300 vertical feet of singletrack. Luckily for Micayla, she timed it perfectly with the summer wildflowers. Blooming flowers are spilling over the sides of the trail. There’s so much vibrant red, yellow, pink, and purple that it would even make the late Bob Ross cry tears of joy. Happy little flowers. 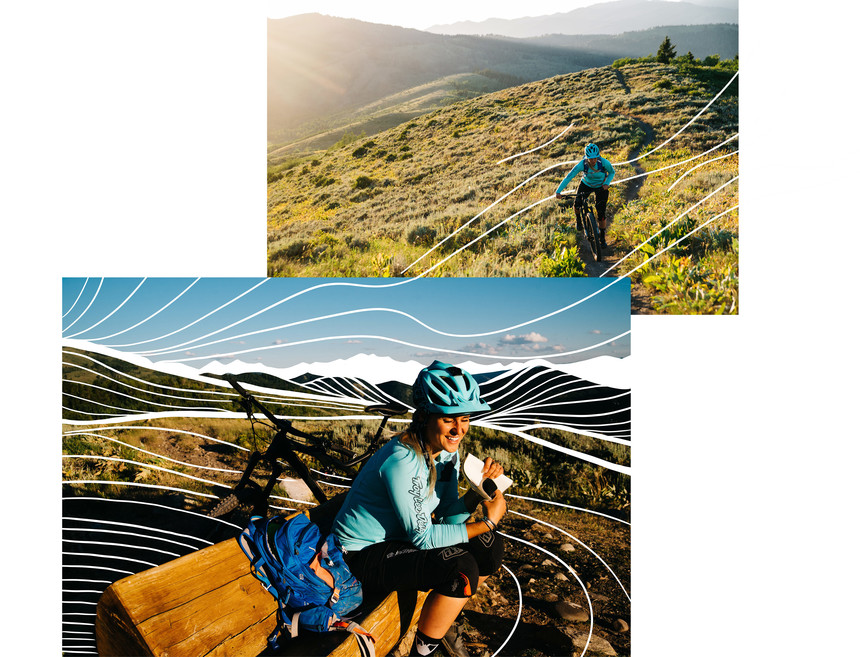 After getting her feet wet on the Pass, we head back to TGR HQ to swap bikes. The sun won’t set until about 9:00 p.m., and since stars don’t start to appear until an hour or so later, we’ve got plenty of time left to sneak in one more lap. With her trail bike in hand, we head to a popular out-and-back loop that’s fast and flowy. As with most of the climbs here, it’s a direct push to the top. In a few pedal strokes, we feel the alpine elevation, but the pain in our lungs and legs is worth the reward waiting up top. Most trails proudly showcase the beauty of the valley and even have viewpoints to sit and soak it in. From our vantage point, we could see Jackson’s crown jewel: The Grand Tetons. With no foothills obscuring the view, the Tetons dramatically rise 7,000 feet from the valley floor. 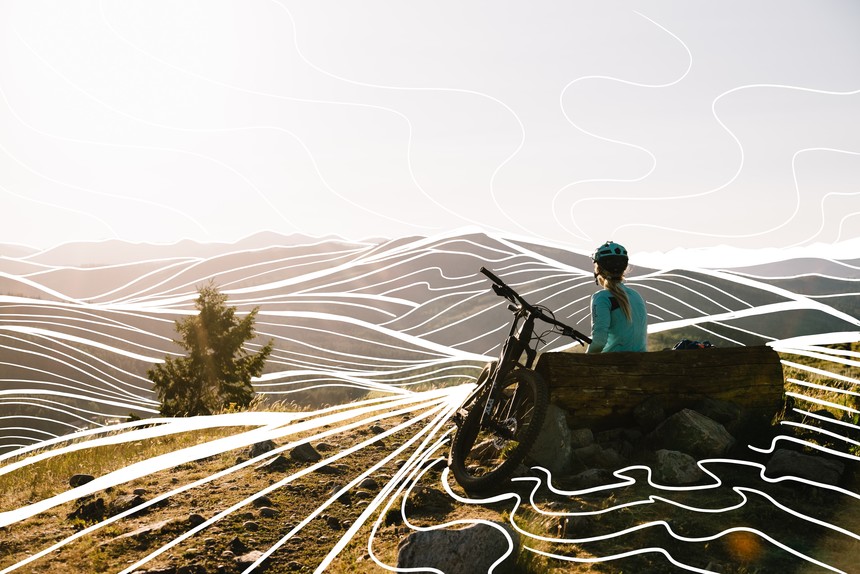 With no real agenda for the night, we take the time to be present with the view. Birds chirp in the trees. The sun steadily inches towards the horizon, painting us with golden light as we bask in its warmth. Micayla trades her bike for a sketchbook and starts making doodles of the surroundings. It’s a scene worth remembering. 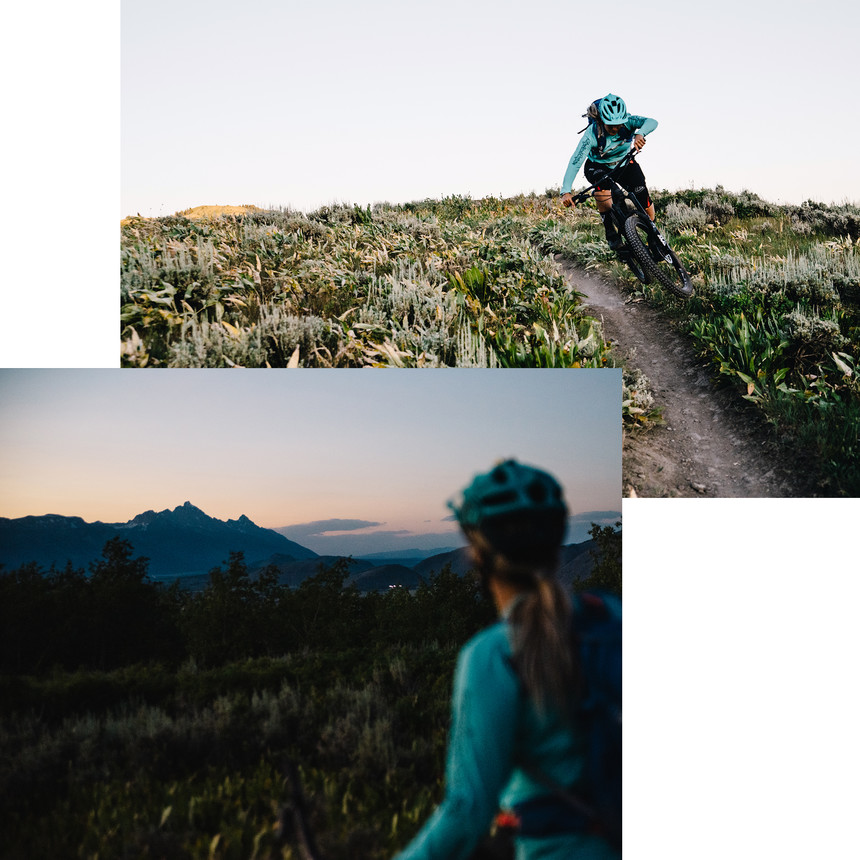 Rather than sprint back to our cars, we savor the sunset until it fades away, leaving us with skies the color of cotton candy. Once satisfied, we chase the lingering light down the rolling trail and decide what we want to eat for our 10:30 p.m. dinner. Thankfully the grocery store is open until midnight. Not bad for a first day.

Feeling guilty that we left Sage all cooped up in my backyard with a very, very energetic goldendoodle puppy, Micayla brought her along the following day. Sage is still getting her bearings as a trail dog, so we kept her away from the gnar of the pass to get her comfortable. Instead, we went back to the same XC zone from the night before but took a different loop. This time we dropped into a dense forest of aspens, shielding us from the midday sun. Technically, it was Sage’s first proper mountain bike shoot, but you couldn’t tell. She was a natural, having learned a thing or two from her mom. The two sprinted through the grove and it became hard to keep my eyes on the pair through the columns of white trees. 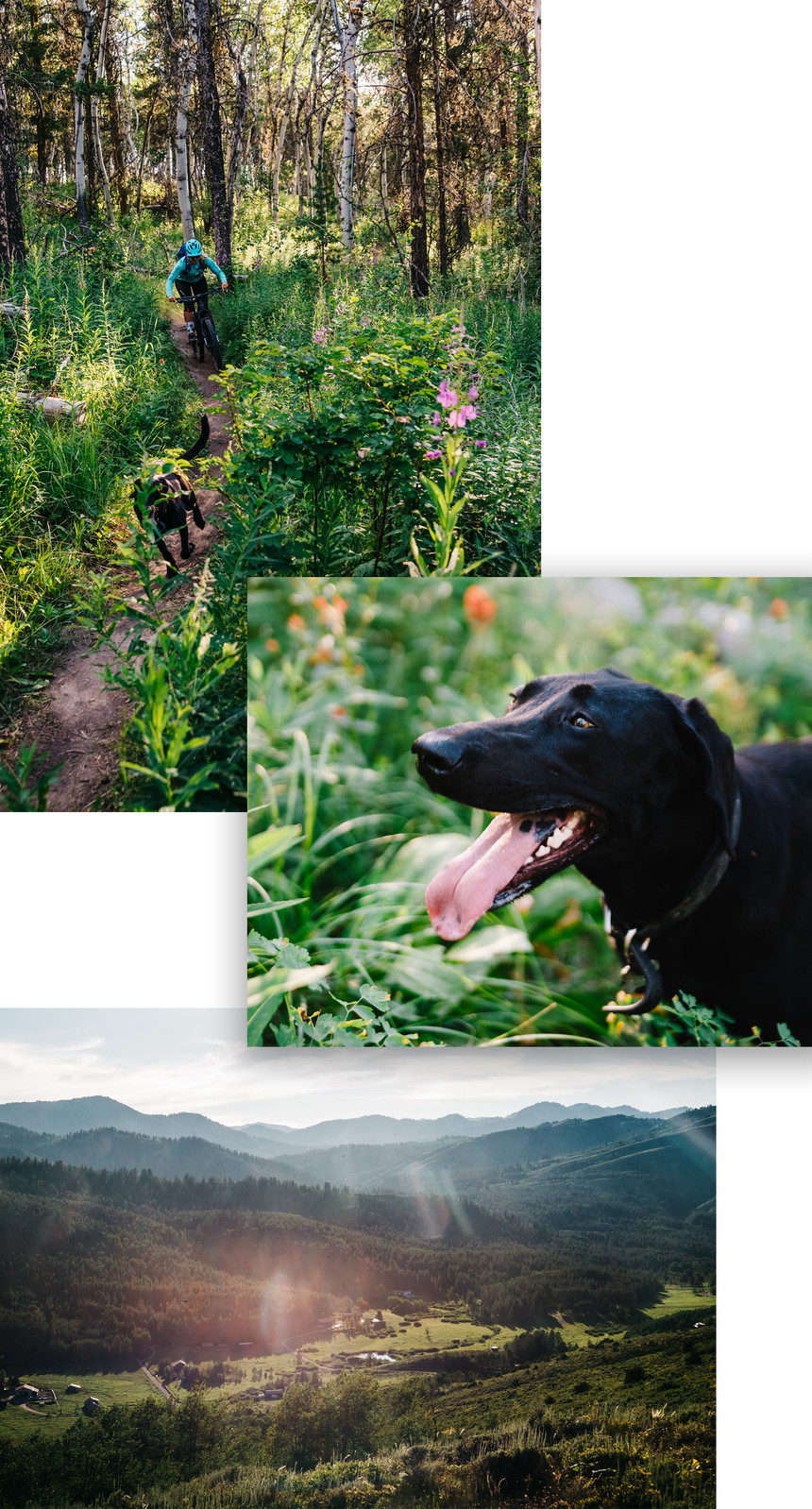 Life isn’t too rough for dogs here since all the trails are dog-friendly. Animals and humans seem to seamlessly coexist with each other. It’s not uncommon to see a local blasting down the singletrack with a furry friend trailing close behind. Some pups even send it off the jumps. Sage isn’t much a freerider though, she’s more interested in finding squirrels and keeping up with her mom. That’s alright with us. After a solid run through the woods, Sage is exhausted. We bring her back home and change out of our riding gear for a different kind of adventure. 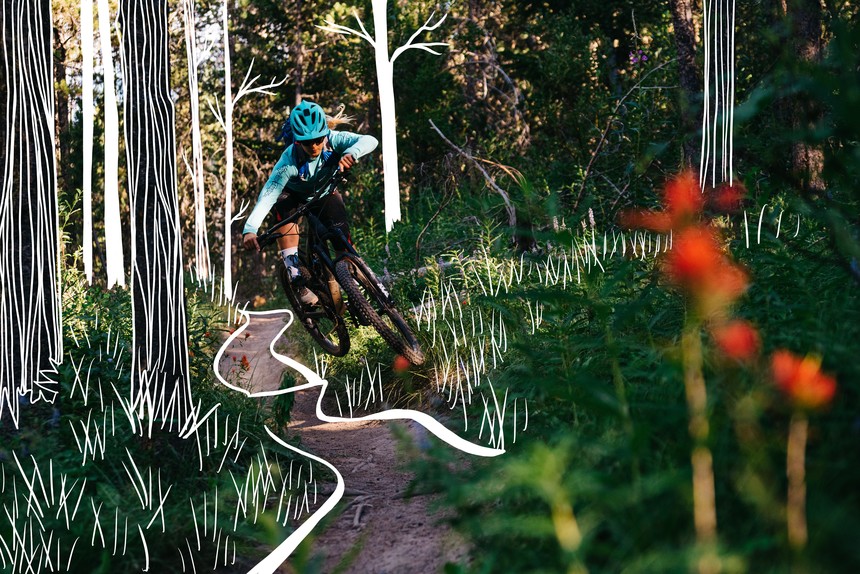 Going to the Park

No trip to Jackson Hole is complete without a visit to Grand Teton National Park. It’s an oasis for outdoor adventures. In the winter there’s an endless amount of projects and lines to be skied. When the snow melts, it reveals miles of hiking paths that weave through canyons, past streams, and towards the tops of these craggy peaks. There’s no mountain biking allowed in the park, which means Micayla and I will use this as an opportunity to catch up on our art. 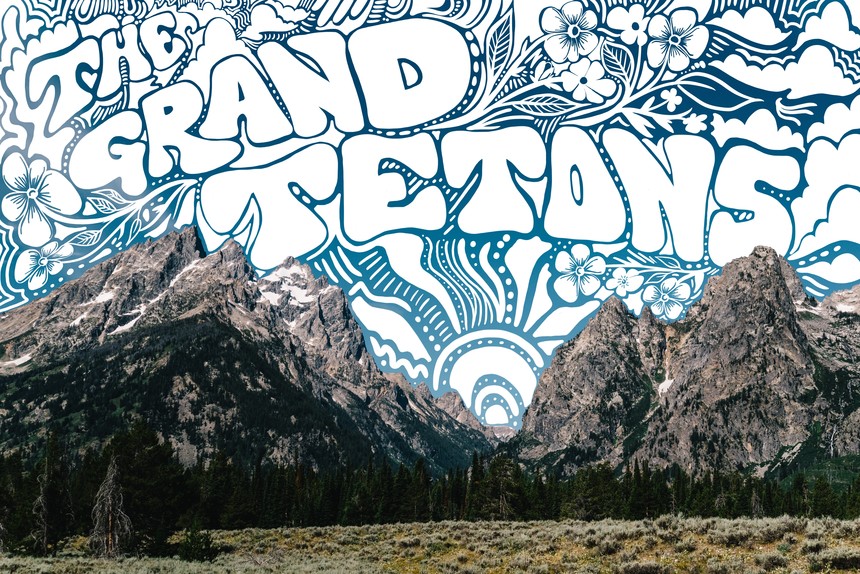 We find a little nook to throw our blanket and break out the watercolors. I’ve got a small travel watercolor set that’s great to stash in a daypack. The views aren’t too shabby either. We linger in the sun for a few hours until our feet feel sunburned. 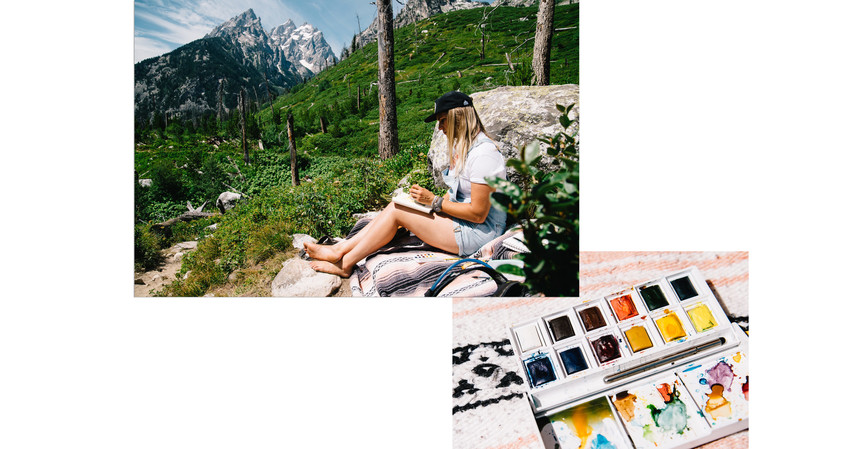 Before heading back home, I make a mandatory pit stop for lunch at the Dornan’s Pizza and Pasta company to show Micayla the best slices of ‘za in the valley. Once again we’re rewarded with unhampered views of the Tetons. With pizza slices in hand, we again break out the sketchbooks and keep the art session going. Even our waiter is intrigued and asks for recommendations on art supplies. Our advice: Get a travel watercolor kit!

Party laps on the Pass 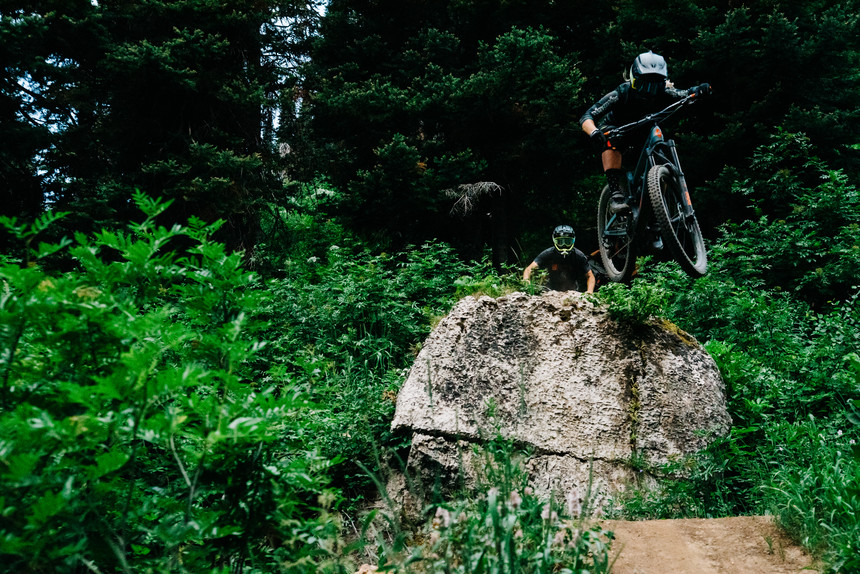 Jackson is merely one stop on a massive road trip across the United States for Micayla. On her last day in the Valley, we head back up to the Pass for party laps with friends. Group rides embody the true spirit of Teton Pass. It’s a great way to try new features and push each other on the trail. Micayla links up with two sendy pals of mine, Brian Sweat and Gage Meredith, who were excited to show her one of their favorite rides. They flew through the forest excitedly ticking off one feature after the next. We rode until sunset, with the daylight completely disappearing when we got back to our cars. 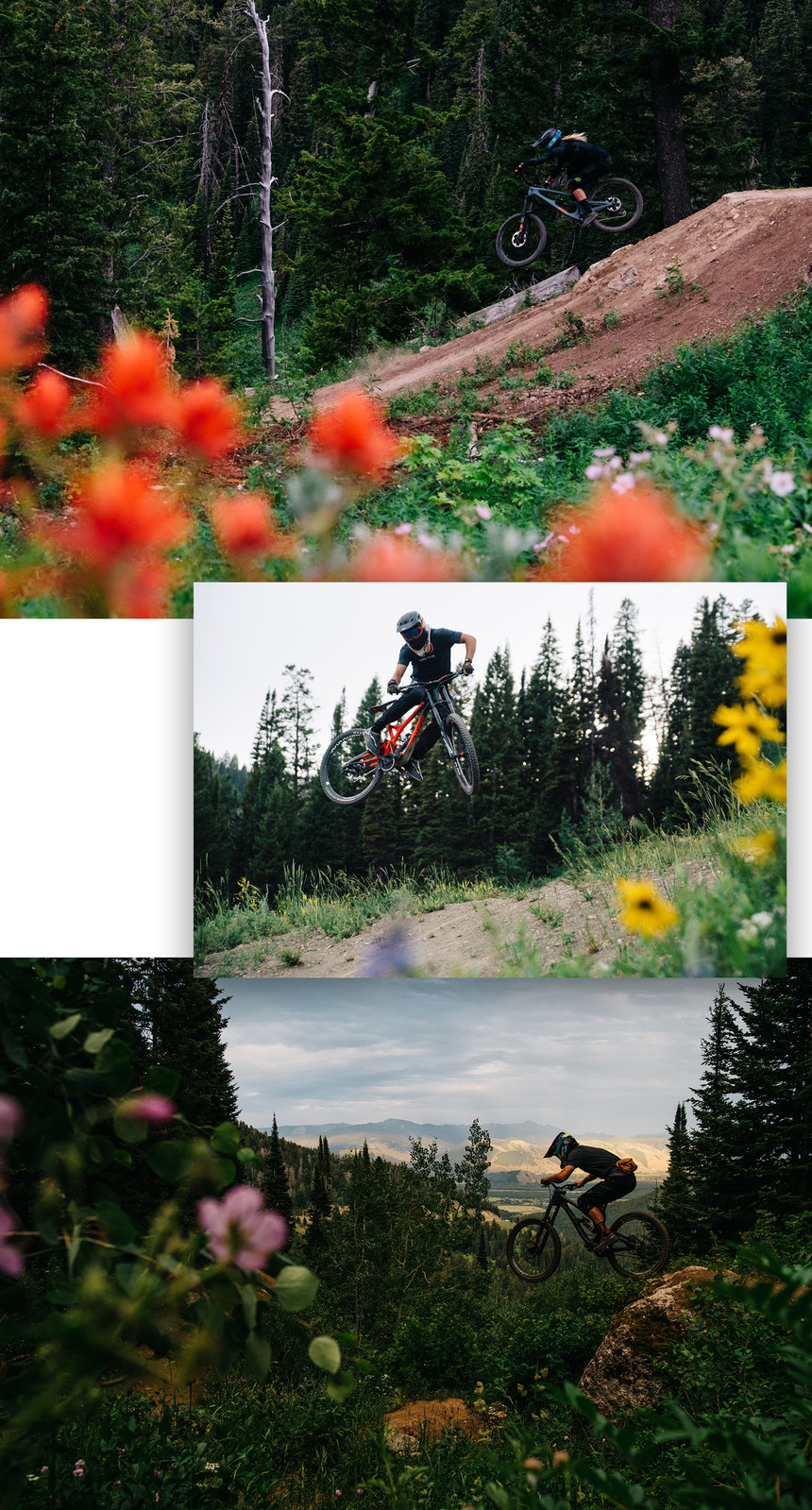 Begrudgingly, bikes were loaded up and we headed back to town for some celebratory beers. There’s a lot of riding we didn’t get to do: The Jackson Hole and Targhee Bike Parks, other classic trails on the Pass, and even the Cache Creek trail network. But that only means Micayla has plenty of good reasons to visit again. The next morning Micayla and Sage said their goodbyes and headed back to the open road. Well, it was more of a see you later. I have a feeling that Micayla will be back, or that I’ll be linking up with her somewhere across the border. No matter the destination I know to expect good riding and to have my travel watercolor set handy. Who knows what will inspire us?