Tyler McCaul: Mountain Biking As a Form of Expression

Tyler McCaul has never been one to just hang out in the shadow of his older brother Cam. In fact, the younger McCaul has taken what he’s learned from his sibling to cultivate a highly refined style of riding and a special take on the freeride mountain bike lifestyle. T-Mac is a ninja of big blind drops, rowdy exposure, and a true master of the style of riding popularized by Red Bull Rampage. These days, he even calls the area around Virgin, Utah home, giving him unparalleled access to big desert freeride terrain so he can further grow his craft. Of course, riding with his big brother is still the best thing in the world, so that’s exactly what the two did for Accomplice.

Tyler credits the start of his career to watching his brother, whether it was learning how to do tricks off their pool jump or figuring out to flip and spin a bike on the local dirt jumps. But he always made it a point to stick out on his own, and when Cam took up slopestyle, Tyler took up DH racing. Of course, the mountain bike world quickly realized Tyler was equally good at slopestyle and freestyle riding, in particular with gymnastic-style tricks. That career progression eventually led him to Red Bull Rampage, where he has competed since 2010 and shown off a penchant for oversized step downs. Fun Fact: He’s even named his favorite ones after margaritas on the menu at Chili’s.

These days, Tyler doesn’t get to ride much with his older brother anymore. In between different sponsor commitments, family schedules, and the fact that they live in different states, life just gets in between. But when Accomplice director Jeremy Grant called them both to ask if they wanted to film a segment together in the Utah desert, they couldn’t refuse. 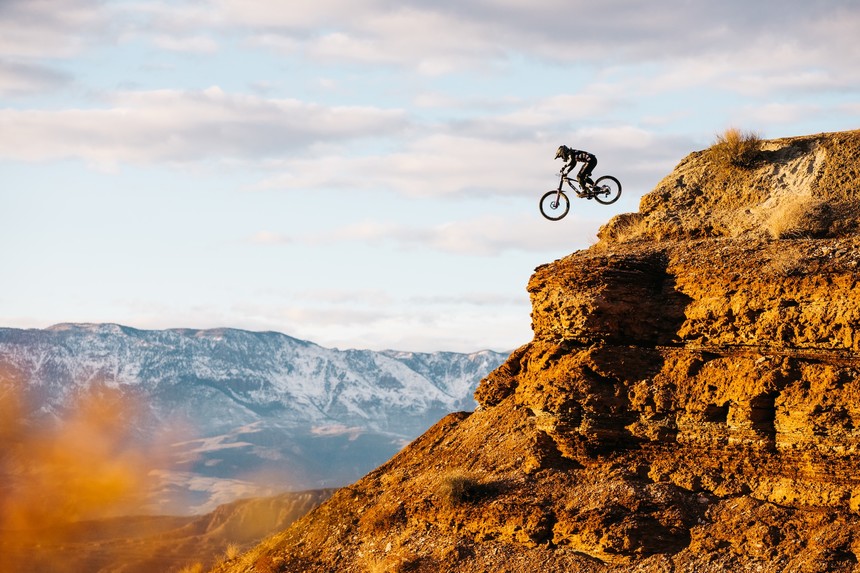 There are no rules, which I like. You can ride a trail bike, a dirt jump bike, a DH bike, and even within those things, there’s always your own way to do it. It’s a form of expression for me.

The film captures them tackling a full-length big mountain line together, feeding off each other’s energy, stoke and respective skill set, just like when they were kids. Well let’s be real, they’re really just kids stuck in a grown up’s body, and that’s exactly how they like it.

Can you tell us your first bike-related memory?

I think I’ve quoted this before. My brother was up the street at our neighbor’s house messing around on his bike, and my dad was trying to teach me how to ride without training wheels in the front yard. I rode without training wheels, and I turned around, and thought holy shit! Coolest thing ever, we have to go show Cam because I can ride a bike now. I think what happened was that I tried to do it, and of course I crashed. But the most powerful part was remembering that I turned around, which was kind of a big deal. 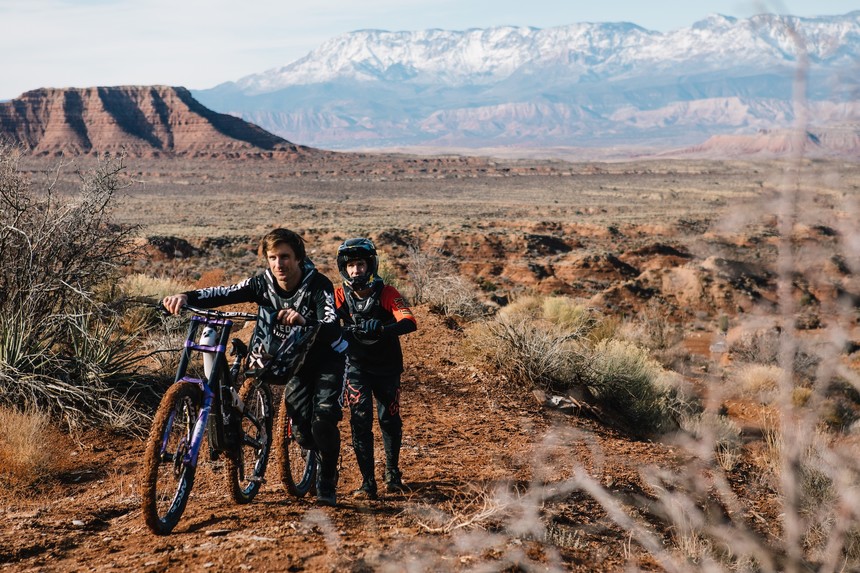 Man, that’s a tough one to answer without sounding super cliché, but I’ll give it a shot. I think to me it’s a symbol of creativity and the best outlet to get outside, burn some energy, and do something productive. At the same time, there’s so many different ways of riding that you can put your own spin on. There are no rules, which I like. You can ride a trail bike, a dirt jump bike, a DH bike, and even within those things, there’s always your own way to do it. It’s a form of expression for me.

I’m not sure how old I was when I first rode a bike, but over the years, mountain biking has always remained something I look forward to doing, even throughout injuries and crashes. It’s never been something I finally decided just wasn’t that cool or fun anymore. I don’t think that will ever happen.

Sounds like your brother Cam was a big influence from an early age, can you tell us about your relationship and how it’s evolved over the years?

As a kid, I was the little brother who would follow Cam around wherever he went. I would get picked on by him and all his friends, but that didn’t matter since we got to hang out and watch them jump and ride. I would watch and learn and help dig, and when I was old enough to start hitting the bigger stuff, they would support me and help with speed and learning tricks. Really, we started to get along a lot better when we began riding at the same level. Cam’s three and a half years older, so that was understandable. 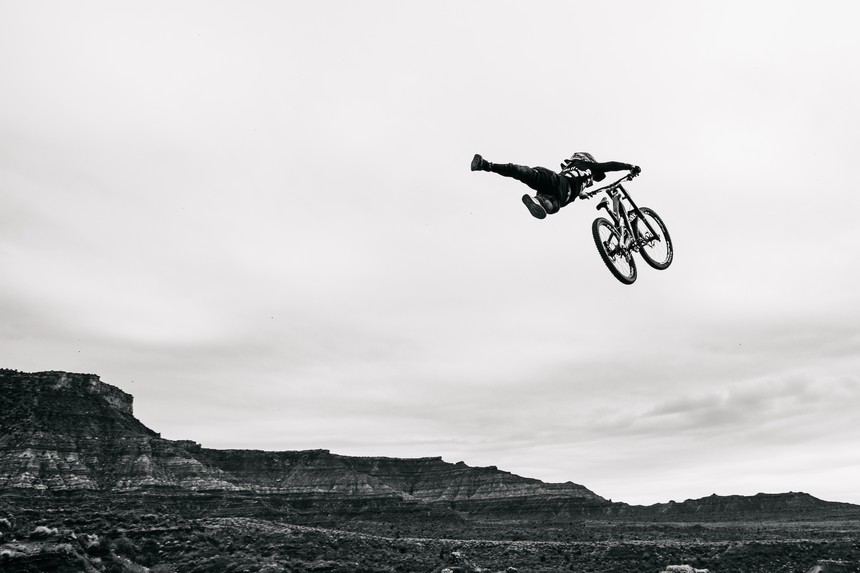 Do you consider Cam a mentor today?

Cam’s definitely still a mentor today. We both have pointers we can give one another, but he’s done a ton within the sport. He has this ability with tricks to learn them so fast, probably because he thinks about them a lot more than people give him credit for. He breaks it all down. I can’t count how many times I would annoyingly film him on the pool jump in our old backyard, and he would crash and ask to see the footage. I told him, “Dude, it didn’t work just go try again” but he wanted to pick apart what went wrong so he could find out how to land it. I can learn a lot from him by that. 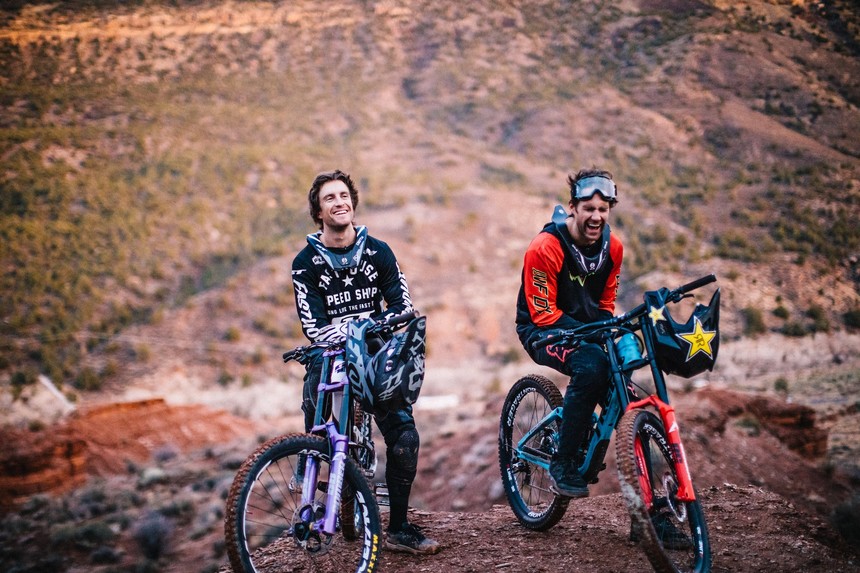 Who else in the sport have you looked up to?

So many people, I don’t know. I try to learn a little from anyone I ride with, no matter who they are. If it’s a different discipline, I want to figure out how it works. I think we can all learn from each other since everyone has their own unique skill set. That way we can all share the cool things we get to do!

What about yourself? Do you coach or mentor the next generation?

I do, and I love it. I’ve been coaching at Highland Mountain Bike Park for over a decade now. They started the Highland Air Academy 11 years ago, and I joined the first one. We had a lot of repeat kids who would come back, and a ton of kids would come back and sign up for my week. As far as riding with people, I’m always willing to help if they want to learn. But I realize it’s kind of annoying to have stuff pushed on you, so I want to respect that and wait for them to ask. 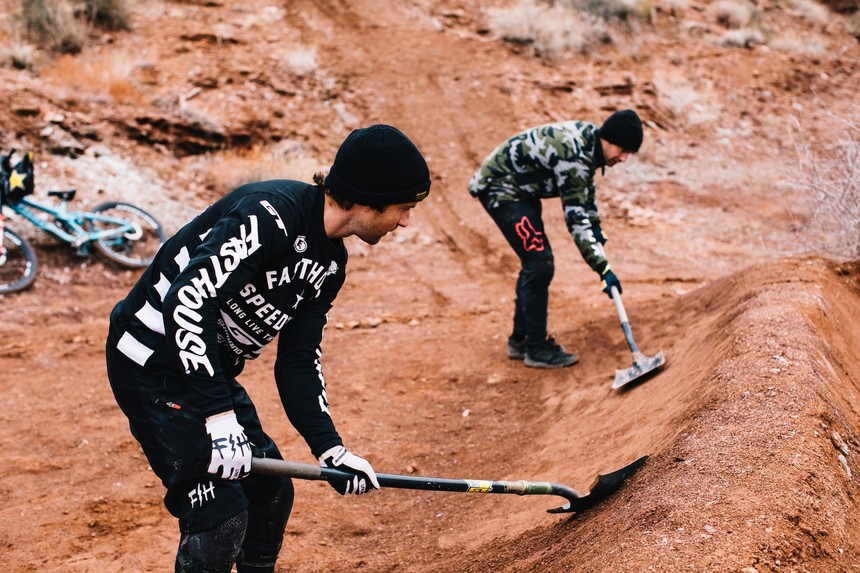 What’s been one of your favorite bikes you’ve ever ridden?

Well in all reality, bikes just keep getting better and better. I definitely have favorite bikes from the past because of memories from an event or specific reason, but if I were to hop on a bike from 10-12 years ago, it wouldn’t compare to what I’m riding right now. So, to answer your question, my favorite bike is the one I’m currently riding. My downhill bike right now, a GT Fury, is the best I’ve ever ridden. I’ve got it really dialed for how I’m riding out here in Utah.

If you could ride anywhere in the world, right now, where would it be?

I’m looking right out my window here in Utah, and I want to ride the hills I see right out there. It’s my favorite place to ride in the world, and I moved here just for that. If I could be extra picky, I’d add in no wind, a little moisture in the dirt, and a comfortably warm but not too hot temperature.

Outside of here, I’d say Highland MTB park, and just about anything in BC. 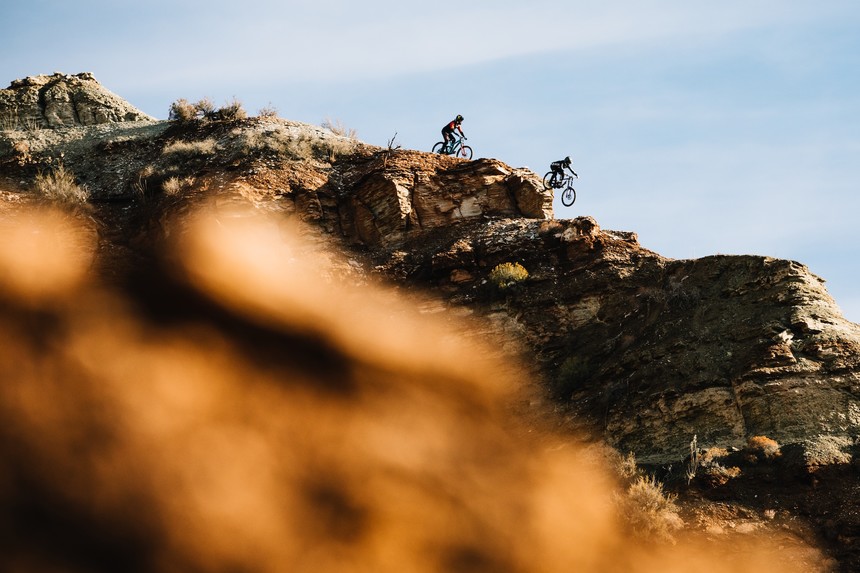 How’s the new home treating you?

It’s amazing, I moved down here a little over a year ago, and it’s definitely been a chance. I never lived more than a mile from the ocean until last April. It’s everything I had hoped it would be, and more. It’s funny, for someone who grew up in California, I never spent much time surfing, instead spending time in the forest, and I do miss the Redwood forests.

Can you tell us a bit more shooting for Accomplice?

Cam and I hadn’t filmed together in a while. We used to make it a habit and it was easier when we had more of the same sponsors, but it’s been harder lately. So when I heard TGR was doing a film and they wanted a segment with Cam and I in Utah, I was stoked. Living here now gave us a bit of a homefield advantage, since I could have an eye on conditions and what we wanted to build and ride. 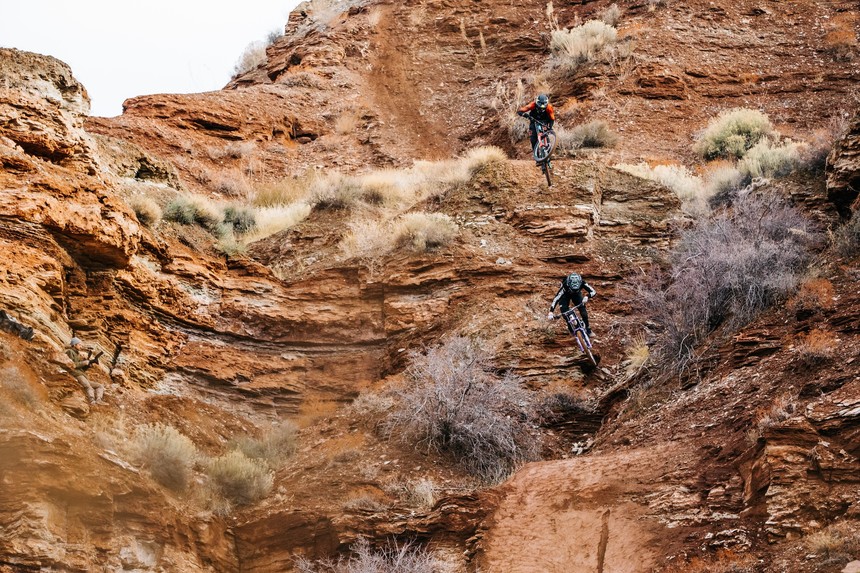 The TGR crew was super awesome and fun to work with, especially since we had some pretty terrible conditions. We were slotted for December and January in southern Utah, which is always a complete gamble in terms of what the weather will do. The crew kept calling for weather updates, and I looked out the window to see the hills covered in snow. I really had no idea what was going to happen since it was my first winter down here and I hadn’t quite figured out the cycles for when conditions would be good to ride. There was a lot of back and forth.

So when they came, it was a mad scramble to get things set up on my end. The day before everyone showed up, I drove out to one of the zones, and got my truck stuck on a flat dirt road. I was stuck for a few hours waiting for the dirt to dry out. But in the end, it all worked out, and we kind of just worked with what he had. Right as we had it just about wrapped, it snowed again, so we called it. 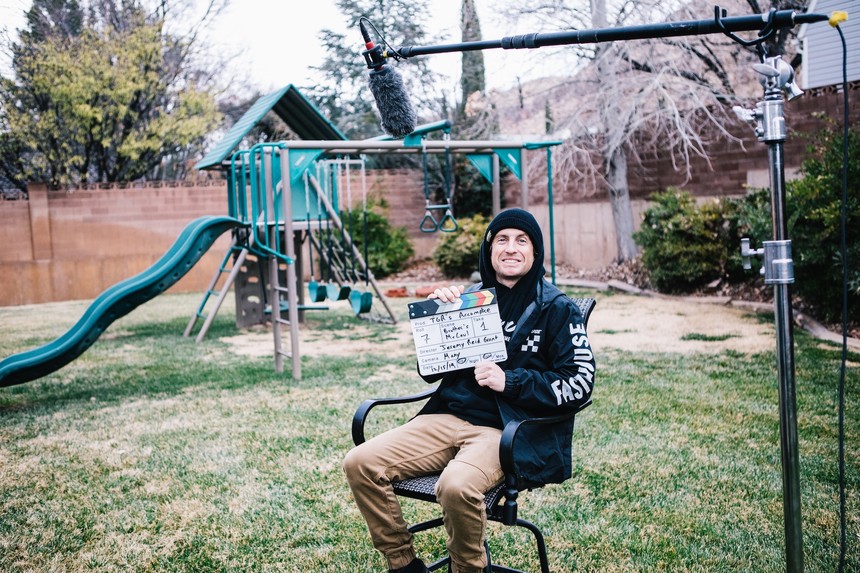 Tell us about the lines you and Cam rode?

It was a mix of stuff I had ridden previously. One of them was part of my 2012 Rampage line. I called it “straight rhythm” because you’re in the air more than on the ground. There was one spot where I really wanted to put a jump, but I had never put one there because it would be a tough build. We did it, and it worked out great.

The other was one of my big drops from 2013. It was frozen the whole time we were filming until the very end, and then when Cam and I went to go check on a whim we saw it was thawed out. So, we did a quick fix on the landing, and we both got to hit it right before sunset. I call that drop El Nino, and Cam brought up that the weather pattern El Nino only comes up every six or seven years, which was somewhat ironic. 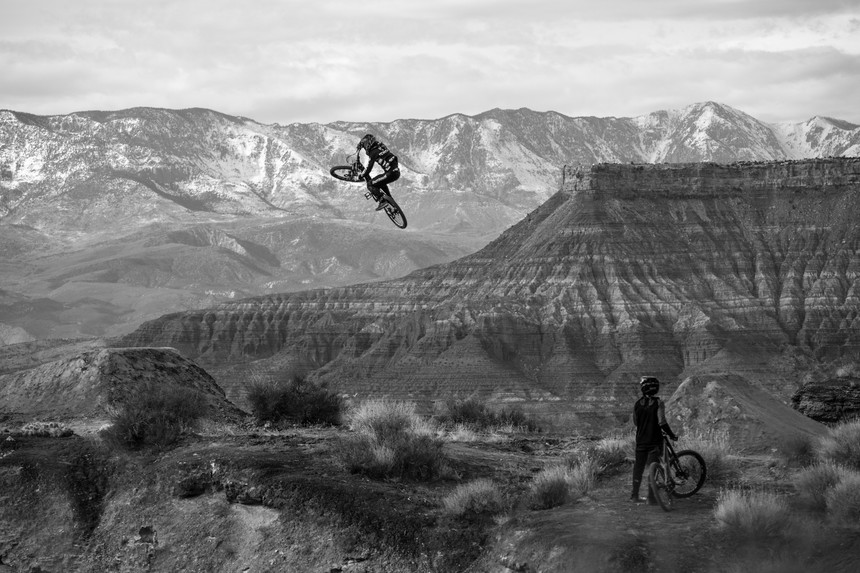