Most little kids like riding bikes and exploring their world from a two-wheeled vantage point. Somewhere along the way, life usually gets in the way, and that simple pleasure gets eclipsed by other more traditional things. In the case of Graham Agassiz, he didn’t let life get in the way. Instead, he made sure that life and mountain biking were one and the same, and he still continues to push the limits of his career today.

Like many other riders, Aggy was born and bred in the mountains of British Columbia. Home to some of the best and most varied riding in the world, Kamloops is high on the list for most any freeride mountain biker. For Aggy, it’s home, and he didn’t waste the opportunity of growing up there on a life that didn’t include riding, and that life has taken him all the way from BMX racing, through slopestyle comps, to the podium of Red Bull Rampage. Along the way, he has developed both a knack for riding on camera, and giving his input into the design of some of his favorite bikes. For Accomplice, Aggy showed the world some of the riding in his close-to-home mountains, appearing in two segments throughout the film. 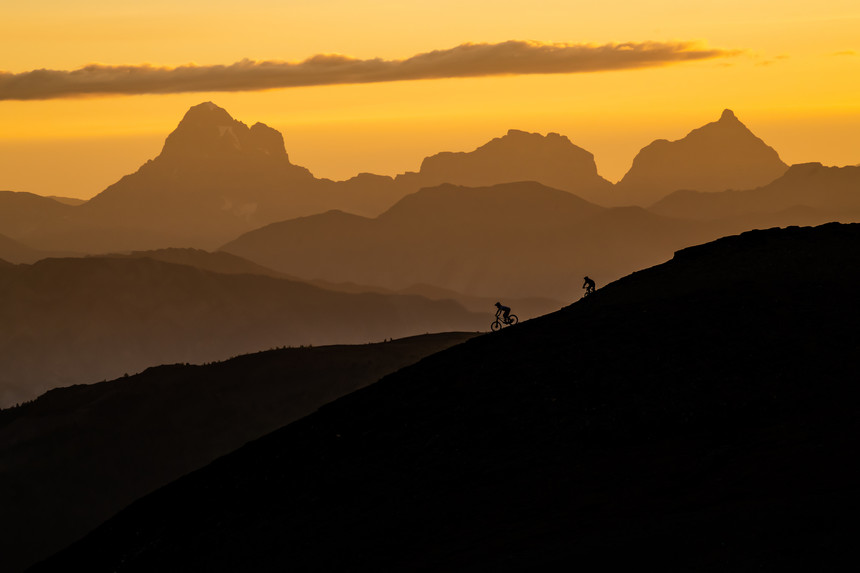 While Aggy is certainly one of the rockstars of the bike world, he likes to remind us that he’s just a regular dude who likes to ride his bike. Here’s what he had to say:

As tool, my bike has been my wings. It’s given me complete freedom to do just about anything I want

What’s going with you during this crazy time?

Graham Agassiz: It’s definitely pretty weird right now! Home is Kamloops, BC for me, three and a half hours east of Vancouver. It’s a total mountain bike town, and luckily our trails are just now starting to open. Our local bike park actually stayed open throughout all this, but it’s good to be able to get out into the mountains again. It’s kind of a weird situation as a pro athlete, with some sponsors telling us stay safe and not get too gnarly, and others wanting more content, so it’s kind of a hard one to navigate. I’ve been keepin’ er pretty mellow though for now, housework and yard work are keeping me pretty busy!

Let’s talk a little about your past. Can you tell us your first bike-related memory?

GA: I can’t remember the very first memory about being on two wheels, but I can definitely picture the house, the driveway, all that stuff. I watched the movie RAD when I was six years old, and the following year I started dabbling into racing BMX because of that film. That’s 100 percent what got me to where I am now. Changed my life! 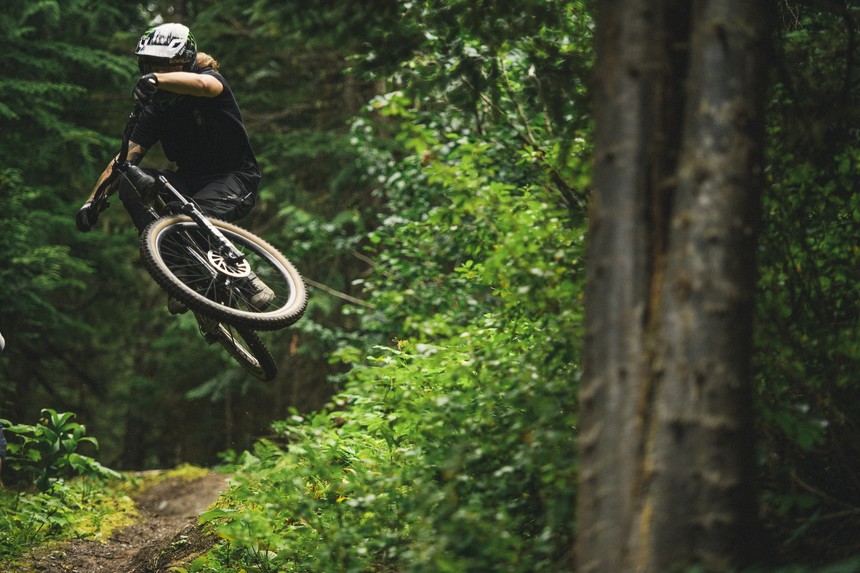 GA: Without my mountain bike I wouldn’t have been able to travel the world like I have and meet all the people that have since become my best friends. It’s been pretty crazy where it’s taken us over the years. As tool, it’s been my wings. It’s given me complete freedom to do just about anything I want. Obviously right now it’s a little tough because I can’t do a lot of what I want to do, but it’s given me that freedom and creativity, which has been an unreal gift.

What’s your favorite thing to do outside of riding bikes?

GA: There’s so many things! Right now all the lakes are icing off, so I’m fishing pretty hard. I like to fish, bowhunt, sled, snowboard, surf. I do as much as I can, but it’s all very seasonal. Right now it’s fishing, and come fall I’ll be out hunting. 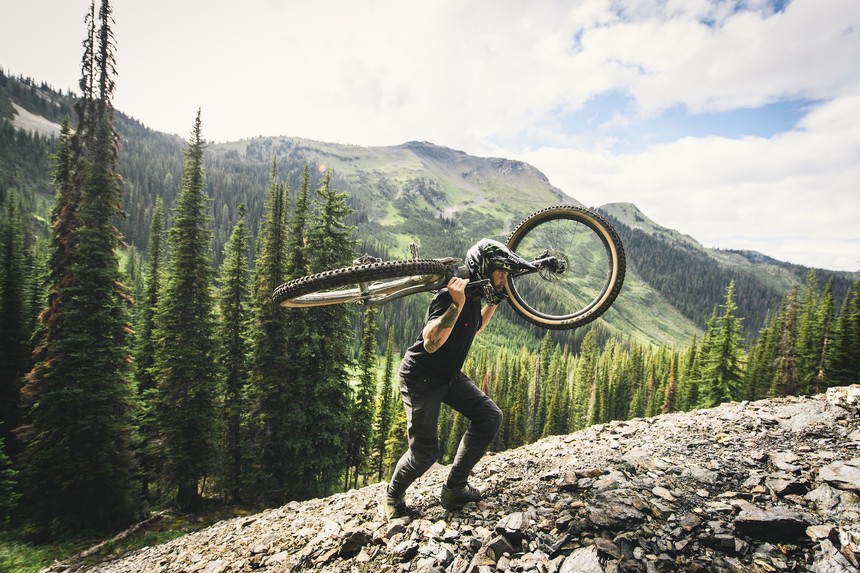 Can you tell us a little more about the freeride scene in British Columbia?

GA: For people who haven’t been the BC before, the first thing you’ll notice is a ton of pickup trucks with tailgate pads and bike racks cruising down the highway. You just know when you’re here. The culture is very alive and mountain biking is very supported all over British Columbia. Freeride is definitely a bit of a dying art here, but funny enough the industry does seem to have come full circle. First they pushed freeride super hard, then it went all trail bike and enduro, and now those bikes are getting beefed up again and are basically mini-freeride machines and that’s what most folks like to ride around here. It’s definitely been the riders who have kept the culture going. Places like Kamloops and Nelson and Retallack, shuttling is alive and well, and we like to go ride jumps and big trails. These days, it’s cool to pass the torch to the next generation and keep freeride alive. 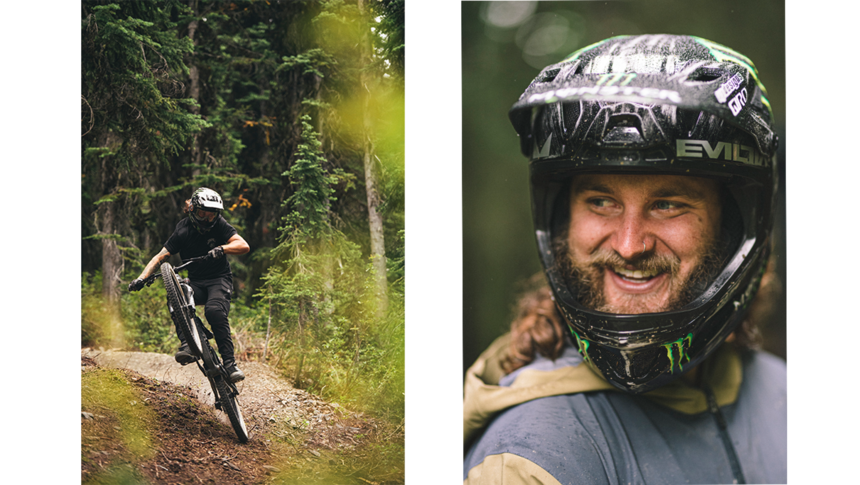 You’ve been around the block, but can you give us the Spark Notes version of your career progression?

GA: Oh man, I could go on and on about this, so I’ll keep it tight. I started racing BMX when I was six or seven, and did that for 10 years. I went pretty hard it and over time realized that it wasn’t for me anymore. My parents were always cool, but you hear about the hockey parents, and you have the same thing in BMX racing. You weren’t really buddies with the guy next to you in gate. I was born and raised in Kamloops, and watching the mountain bike community grow and grow, I realized I had to be a part of it. For me, every day after school, there was this classic trail in Kamloops and everyone would sit at the bottom of the hill waiting for a shuttle. Most of my high school memories from biking involve doing as many laps as I could on that trail. That culture was really before its time and that really got me into it.

I did my first jump event at Sun Peaks in 2005 or so, and I won. I was pretty shocked, and I think at that moment I realized I could make it as a pro. So, I made a go of it. My parents helped me get to Colorado for the Crankworx there, where I did well too. Didn’t get into Crankworx Whistler that year, thought I should have, but luckily Darren Berrecloth had started watching me and invited me to his contest out on Vancouver Island which was right after. I ended up getting third, beating all these big names. I beat Semenuk. 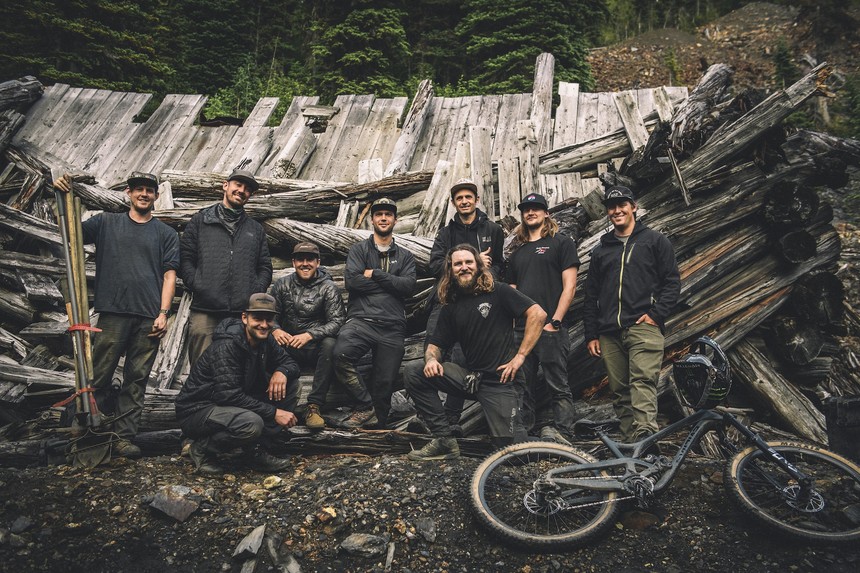 That’s when a lot of doors opened, and the production companies started calling, and getting more sponsors and events. By the time I graduated in 2008, I was set to rock this career. From there, it’s been a lot of ups and downs. Definitely had my fair share of injuries along the way, but if I’m not crashing then I’m not trying hard enough. There’s still a lot of things I want to accomplish, so I keep just chipping away.

It’s not a very clear career path, who would you consider your own mentors who have helped you along the way?

GA: A lot of different riders, for sure. I’ve always looked up to Andreu Lacondeguy. Coming from Kamloops, New World Disorder [the legendary old-school freeride films] would be in town every year, and I was always the kid out there helping push bikes on the hill or pressing record on the camera where over there. Andreu was one of those guys who I got to know and always looked up to. Also, I always have looked up to Darren Berrecloth, especially since he gave me that huge opportunity during his event. Finally, Andrew Shandro has always been my guy behind the scenes, helping me with contracts and the business side of it. He’s taught me a lot and I still call him all the time when I need help with something on that front. 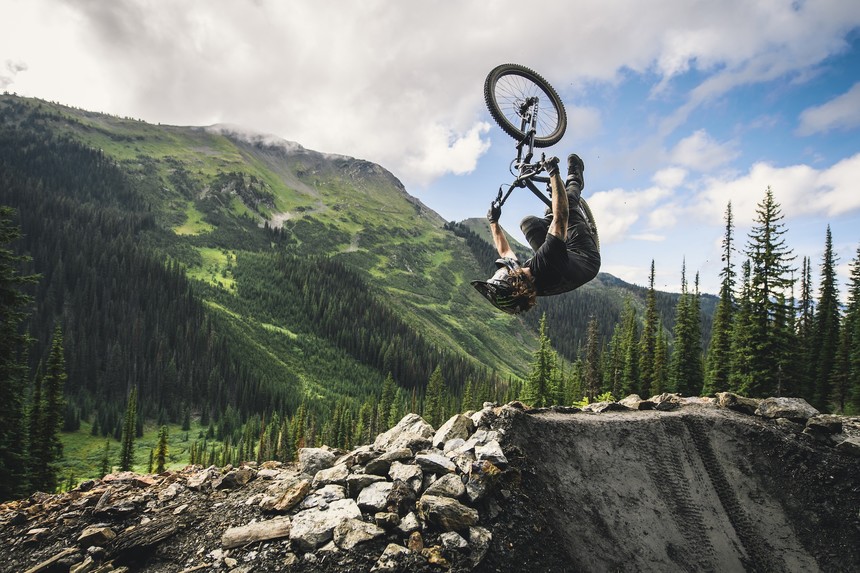 Let’s talk about bikes. What was the bike setup you used filming for Accomplice?

GA: For the film, I rode two different bikes from Evil. One of them was the Calling for the Retallack piece. It’s definitely my favorite bike of the whole fleet, and I can say it’s everyone at the warehouse’s favorite bike as well. They call it the bike-shaped-skateboard. I gave it what I like to call the advanced karate mods. Normally it’s 150mm in the front and 130mm in the back, I made it 160/140, by switching the shock and doing some other secret stuff. That helps me charge super hard on trails where most people are riding downhill bikes. All the bikes are very progressive.

In the Purcells, I was on my Insurgent, that I modded a bit too. Its 150mm in the rear, but I threw a 180mm Boxxer dual-crown fork on the front. Definitely a sporty setup for me, but it worked great. Evil uses a flip-chip in the suspension, and I was able to use that to lower my bottom bracket and slacken out the head angle, which made it great for the big-mountain style riding we were doing. Bikes are weapons these days. Working with Evil has been amazing so far, the bikes are super progressive and jump and corner really well. Right now, I’m on a new bike that I can’t tell you the name of, but I will say I’m super stoked and keep an eye out for it soon.