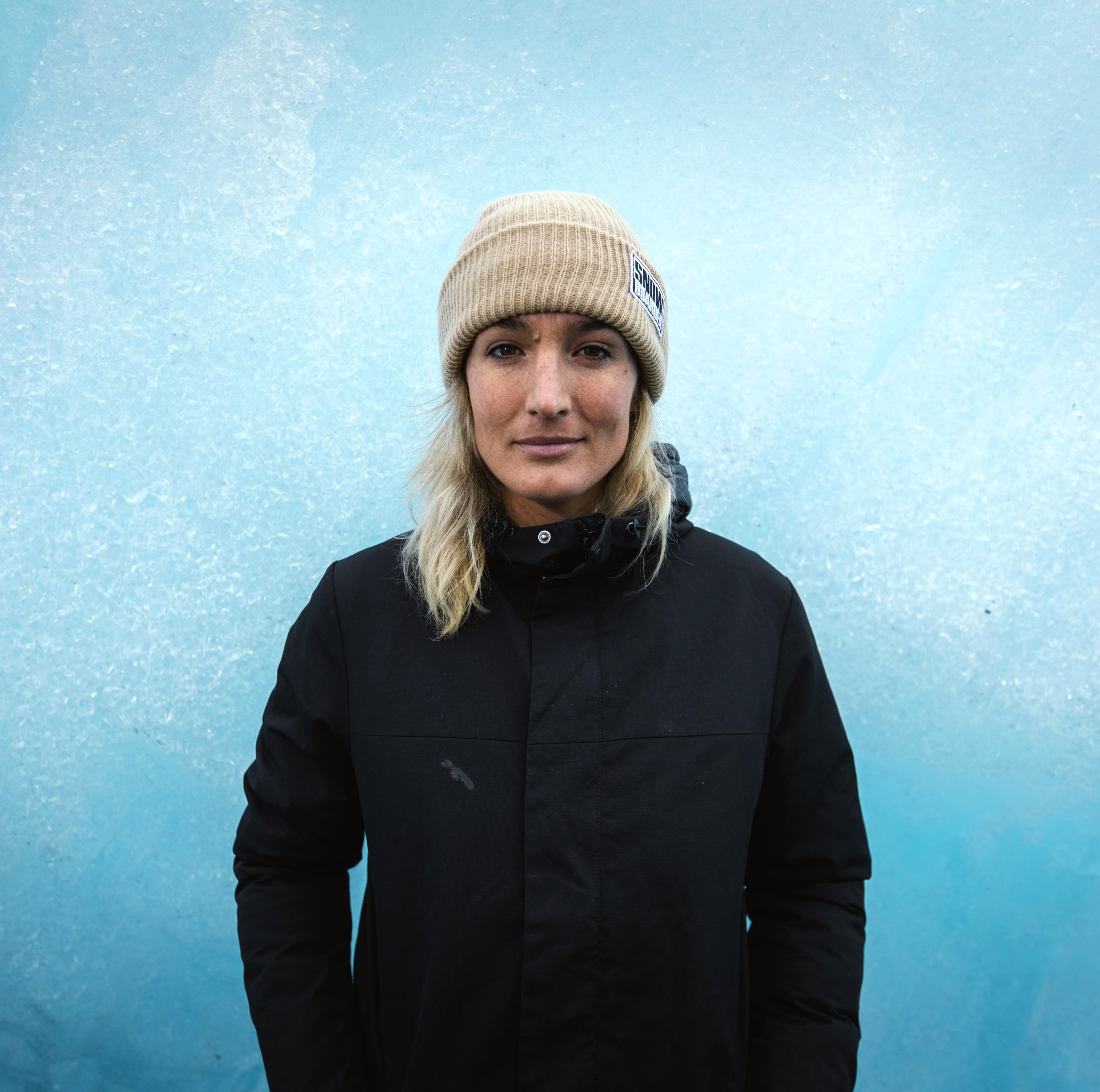 Snowboarder Hana Beaman’s career has been one of constant migration.

Her first board was a prototype from Tom Sims—potentially one of the first grom boards ever made. Children’s snowboard boots weren’t really a thing at the time, so she made it work with her ski boots. It wouldn’t be until her teenage years though, that Beaman would really fall in love with the sport. Shred flicks changed everything. At the time she was ski racing, but quickly ditched two planks for the shred culture of snowboarding.

For about a decade she lived the life of a nomad, constantly leaving her hometown in Big Bear, California to snowboard in elite slopestyle events all throughout the states. Frequenting the podium, Beaman’s accolades include three X Games silver medals and two golds from the Burton U.S. Open. Then in 2003 Beaman got her first sled. It opened up a whole new world for her. When she wasn’t wearing a competition bib, she was out on her sled exploring backcountry terrain all throughout North America with legends like Travis Rice. “Her powerful riding style and confidence in the backcountry are such a force to be reckoned with,” Transworld Snowboarding wrote in 2017.

Eventually she couldn’t shake the need for the freedom and creativity of out-of-bounds terrain, and retired from competing altogether to explore mountain ranges throughout the world. Being in the backcountry reignited her love for the sport, and she dedicated herself to the discipline. Transitioning from slopestyle riding wasn’t easy, but Beaman was tenacious—and still is. Now she’s one of the most respected female big mountain snowboarders out there, with stacked segments in the acclaimed all-female snowboard movie Full Moon and Van’s Listen to the Eyes. Steadily, she’s even taken on the role of mentor, eagerly shepherding the next generation of big mountain riders like good friend Mary Rand. “I’ve followed her career and she’s always been one of the top female riders I’ve looked up to,” Rand explained. “She’s always down for a good time and adventure."

This summer she’s switching things up. Teaming up with the TGR crew and good pal Rand, she’s in for a big road trip adventure. Starting in Alaska, they’ll work they way back to her home turf of the Pacific Northwest. There will be no shortage of snowboarding, surfing, cliff jumping, and random shenanigans along the way. Before leaving for the Last Frontier, Beaman was here at TGR Headquarters. We caught up with her right before she hit the road and here’s what she had to say:

When in Alaska, Hana and Mary do as the Alaskans do by chartering a heli. Justin Mayers Photo.

What’s the most memorable road trip you’ve been on?

There’s this one that sticks out in my mind—it was even in my Ford Ranger. It was a road trip from Mammoth, California to Bend, Oregon for a snowboarding contest. Then we went from Bend to Breckenridge, Colorado then back to Mammoth. It was this big triangle and it was me and two of my guy friends. We were just hauling across states with so much stuff packed into the back. We even picked up a fourth person and somehow crammed him into the back. I used to ride for Red Bull, so cases of Red Bull were sent to one of the houses along the way, and consequently we had to bring six cases of Red Bull in the truck with us as we drove to Colorado. We would chug them left and right, and then eventually in the middle of the night we had to pull over and stop to throw up. Lots of good memories on that road trip, I don’t think we even slept.

Funniest moment from a road trip?

Not too long ago with Mary, we drove from Bellingham down to Tahoe. It was in my truck and we were pulling a trailer with snowmobiles on it for this photoshoot. We loaded up the sleds on a borrowed trailer from our friend Pat. He warned us that it was a little old, but that it would do the job. We got it checked out, and things looked good.

We drove all the way to Tahoe, did the shoot, and literally used the sleds for one bump up while shooting and then we turned around and headed back home. On the way back, in the middle of Oregon, I noticed something was wrong. I looked back and the trailer was burning and smoking. We pulled over and found out that the wheel was seconds from falling off. It had exploded the bearings and the trailer probably would have catapulted off the road. Very very slowly we pulled into this little town to get someone to look at it. Per Pat’s request, we had to leave the broken trailer with the guy at the body shop, and then drive to the next town to get a Uhaul. After reloading our sleds up in the new trailer, we headed home. That was a long trip.

Trailers give me anxiety, that’s why I have a truck. 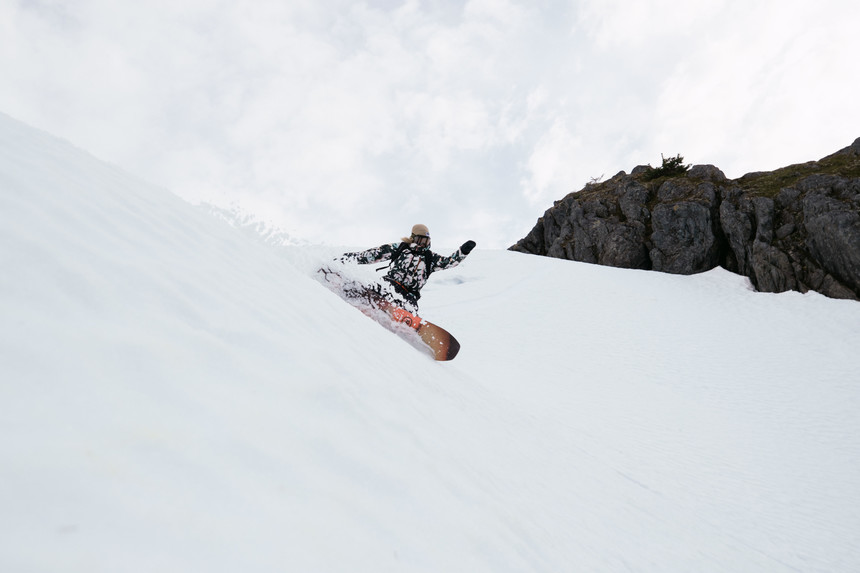 What are your favorite road trip snacks?

I love gummies or those seaweed snacks. If I’m good I’ll pack healthy things, otherwise, I’ll get a random corndog at a truck stop. It’s a road trip—you earned it.

What are some items you don’t leave home without?

In my truck, I always bring safety gear. Particularly, I carry a hatchet, a knife, flares, and a crank radio. Sleeping bag and pillow are good too. I’ll be bringing a yoga mat for this trip because I’ll need to stretch a lot from sitting in the truck for so long.

Maybe I’ll bring a blender so we can make smoothies! That is, if there’s an adapter in the truck?

Editors Note: Hana was excited to learn that she could indeed bring her bullet blender.

Tell us what’s on your road trip playlist—any podcast recommendations?

I have a playlist for riding my motorcycle that’s like a road trip playlist—it’s got an open road/Americana vibe to it.

What’s special about traveling by truck?

I think traveling by truck is awesome because you can bring a lot more stuff. For me, it’s more about going through the scenery and towns. It’s a slower pace. Being able to stop where you want and being on your own program—unlike being strapped into an airplane seat—there are more options. I think that’s fun. It’s more intimate because you pick the crew you’re with and you’re all there for the same reasons.

I competed for the first ten years of my snowboarding, and sometimes I’d fly to places but it wasn’t cheap. So, it was a lot easier to load up into a car with your buds and just drive to events. That way everyone can share the costs. I always found it to be a more rewarding experience than dishing up a couple of hundred bucks to fly somewhere.

For Hana, the off-season is her time to play. Justin Mayers Photo.

How do off-season sports influence your snowboarding?

I think I am a better snowboarder because I do more sports. Surfing helps. Skateboarding helps. Biking helps. All of these sports are indirectly related to snowboarding. Mostly because I have a different outlet and it balances me out physically and emotionally. It just mixes up the body movements you do, and the more you do the more well rounded you’ll be as an athlete.

Plus, I love being the person out surfing that no one is expecting to be the coolest gal out there. I’m just doing it for fun and because I enjoy it. I don’t have to be somebody when I do these activities. It’s a release.

What features do you look for in an adventure mobile?

I look for 4WD, toy storage, comfort, and reliability. It has to be a reliable vehicle for me to take it thousands of miles into the unknown. 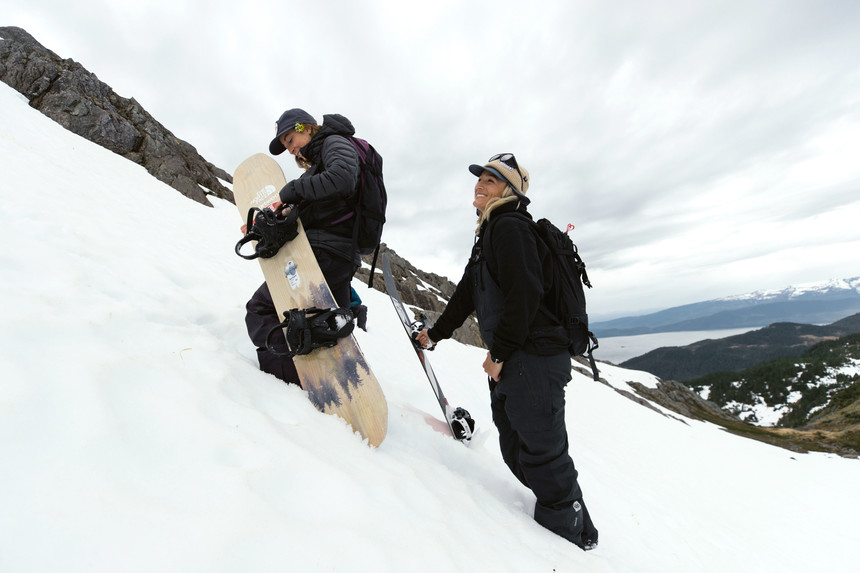 Road tripping is all about building relationships, whether it's with old friends or people you meet along the way. Justin Mayers Photo.

Any tips and tricks to share from your years on the road?

Pack less than you think. I’ve started packing a lot lighter, because if I keep it simple then I’m less worried about staying organized and more focused on what I’m doing. Also, have a lot of good offline music or podcasts. And at a bare minimum know how to change a tire.

What are you looking forward to on this trip?

Looking for cool new zones that I don’t normally go to. I’ve been to a bunch of spots in Alaska and the PNW but I don’t want to go where I’ve been, I want to dig deeper. I’m hoping it’s more of a treasure hunt, and there are so many opportunities for that in the PNW.