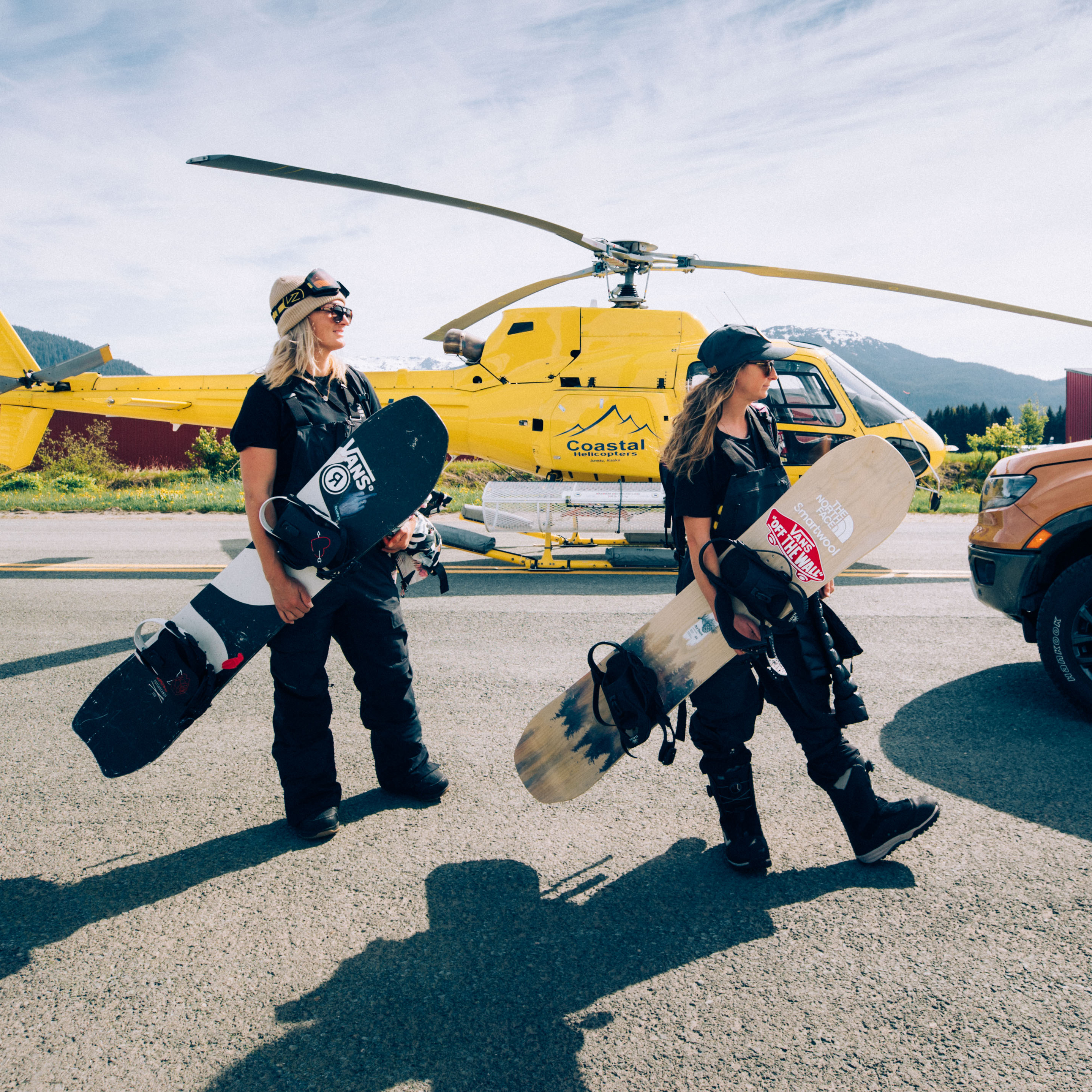 Chasing Water of All Forms in the PNW

This was not Hana and Mary’s first rodeo up in the Pacific Northwest. Already well-acquainted with both Alaska and Washington, the snowboarders were able to peel back a whole new layer to some of their favorite zones during their month-long road trip adventure up North. 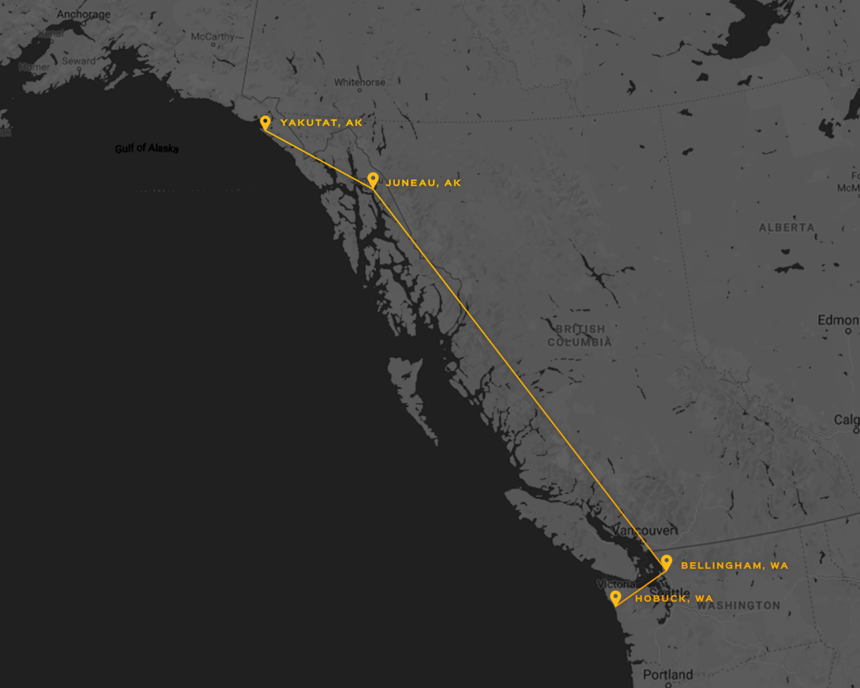 Since both have already visited Juneau, Alaska before, the girls wanted to take the road less traveled with the  Ford Ranger on this adventure. At one point they even chartered a small boat to access an especially remote and beautiful hot spring. The boat ride had them weaving in and out of chunks of glaciers as they admired panoramic views of the mountains. Upon arrival to the pools, the crew was delighted to learn that right nearby lay some all-time cliff jumping, which they took full advantage of. 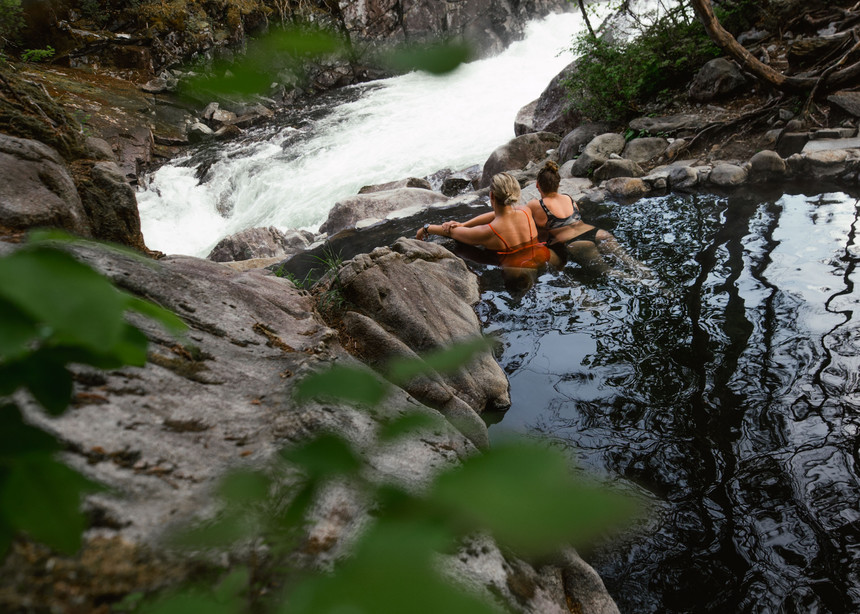 Nothing like a long soak to kick off a whirlwind road trip. Justin Mayers Photo.

Rejuvenated from the warm waters, the crew set their sights on the main objective for Juneau: snowboarding. Even though the area was transitioning into spring, there was still plenty of riding if you were willing to work for it. Thankfully they had a little extra help from friend and fellow snowboarder Mark Rainery, who calls Juneau home. With his valuable intel, they were able to hike a few lines at Eaglecrest ski area. And while it was no walk in the park, they at least got to enjoy stunning views of Juneau whenever they needed a breather. Not bad for type II fun. 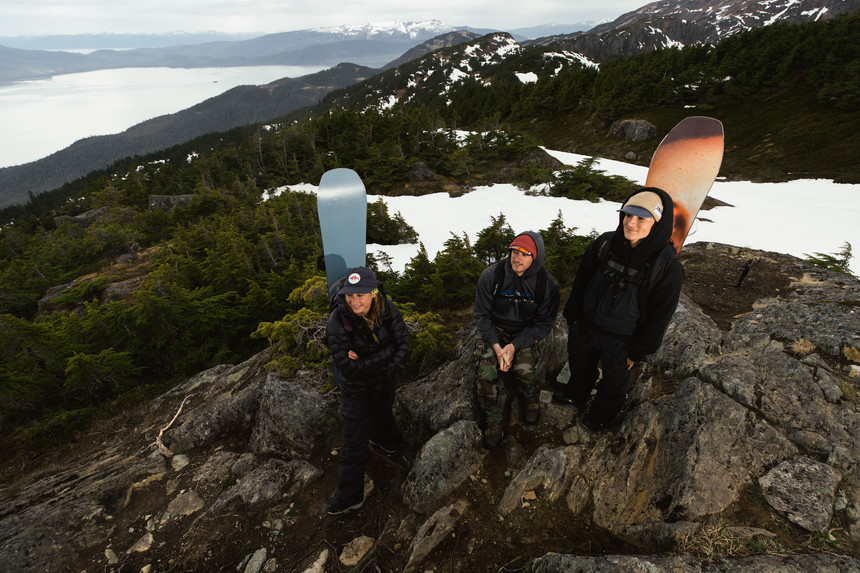 After a full day of hiking, the girls were happy to hitch a ride up the mountain via helicopter for their second day of riding. The airlifted assist brought the crew to a much higher zone, which meant the snow was significantly better. The improved conditions opened the door to bolder objectives, including some spicy couloirs that caught their eye. They took a few laps before returning to their basecamp on the beach—a relaxing way to end each day. 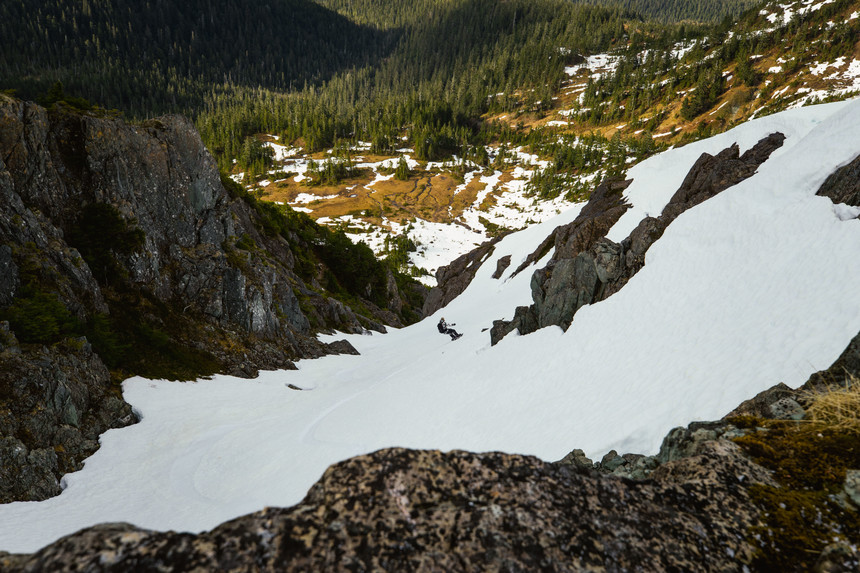 Hana weaves her way through one of the couloirs. Justin Mayers Photo.

During week two they traded their snowboards for surfboards and packed up for Yakutat, Alaska. The tiny fishing village is a world-class surfing destination hidden away. With no major roads, the only way in or out is by ferry or plane. But coming out here is worth the extra effort, particularly for the views. The stunning Saint Elias mountains—the highest coastal mountain range on Earth—dominates the horizon. Sure, the water might be a bit chillier than Baja or Hawaii, but the experience, as the girls learned, is certainly one-of-a-kind. Plus, the passionate locals like Jack Endicott, who owns Icy Waves Surfing, made sure the crew was equipped with everything they needed for a fun time on the beach. 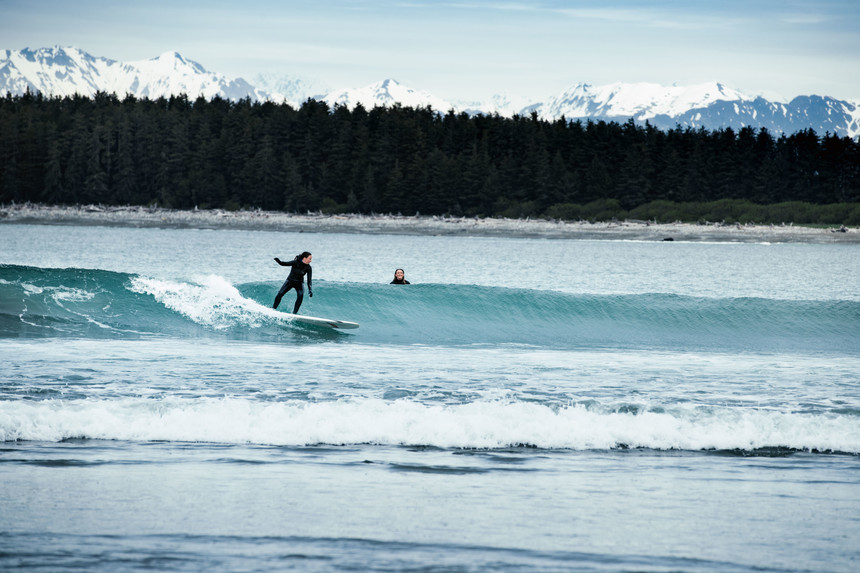 Surfing in Yakutat was one of the major highlights for Mary and Hana. Justin Mayers Photo.

After two jam-packed weeks of exploring in Alaska, Hana and Mary hopped on a ferry back to their home state of Washington. Opting for the scenic route through Alaska’s Inside Passage, the journey south awarded them with countless views of fjords and lush islands. While it was certainly the most beautiful route home, it was not the quickest. In total, the ferry took three days, and by the end Hana and Mary were getting restless. Keeping with the board sports theme, they took to the local skatepark to get the blood pumping again. With skateboarding as their means to explore, they scoped out and skated at new parks all throughout the Bellingham area. 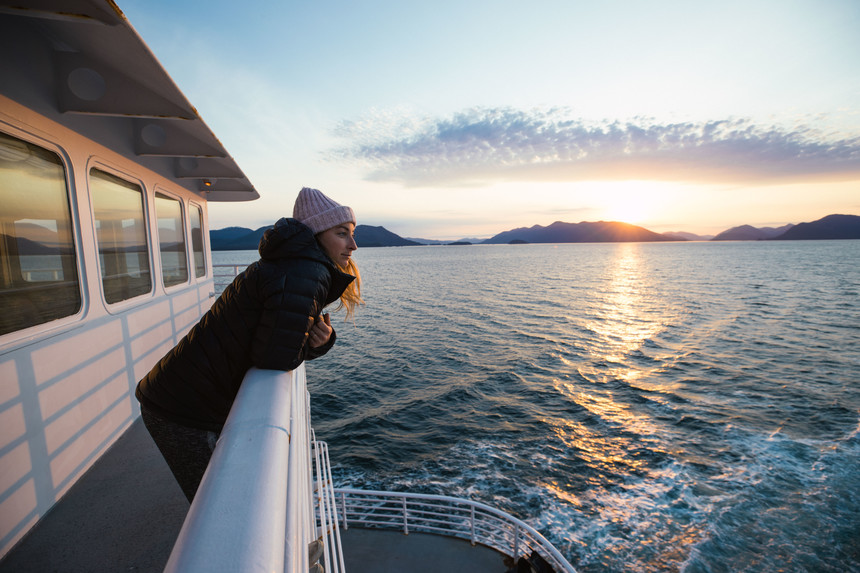 In addition to the scenic views, the girls spotted a few sea critters. Justin Mayers Photo.

With one week left to go on their adventure, the girls still had one important item on their to-do list: mountain biking. And what better place to go for a ride than Bellingham, a haven for cyclists. Hana was thrilled to give Mary a tour of her backyard trails and show her the ropes. 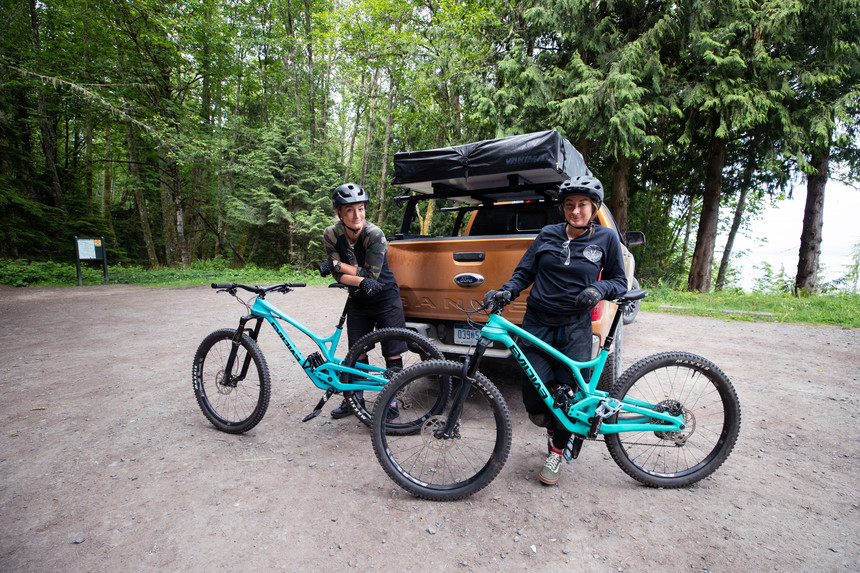 Hana was excited to show Mary what her local trails had to offer. Justin Mayers Photo.

Before they could officially wrap up the road trip, Hana and Mary took the Ranger for one last adventure. Not too far from them is the Olympic Peninsula, which is home to some incredible surf. Unfortunately, Mother Nature wasn’t too keen on cooperating and the waves weren’t firing. All was not lost, they decided to stay put along the coast and set up camp which turned into a relaxing and-much-needed bookend to a month of non-stop travel. 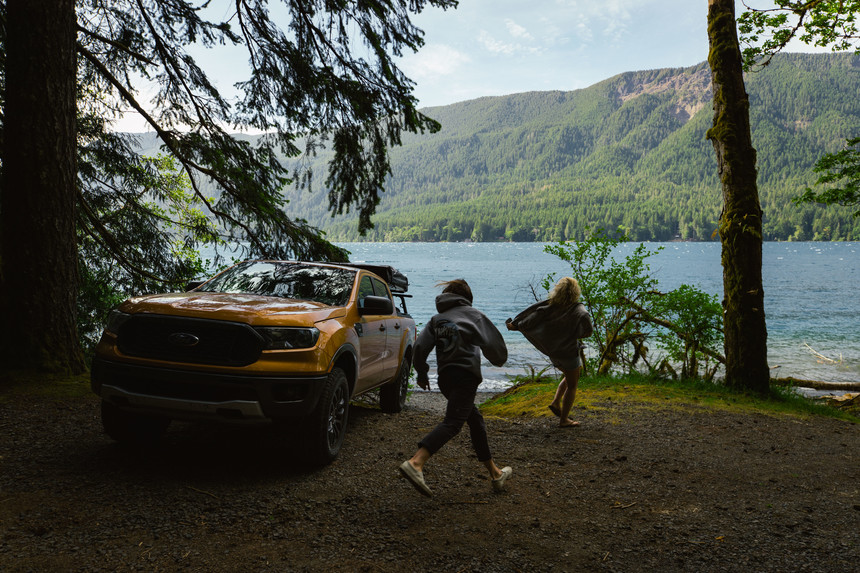 That’s it for team 2, thanks for tagging along! Justin Mayers Photo.